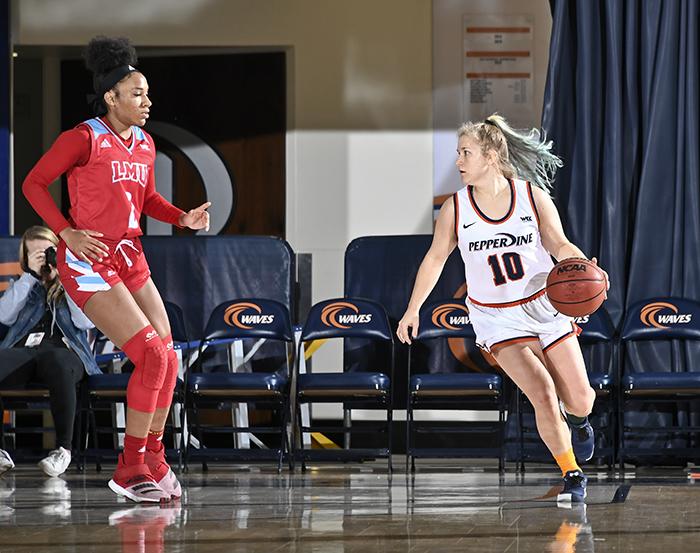 For the 12th-consecutive year, West Coast Conference (WCC) basketball invades the desert of Las Vegas for its brand of March Madness.

Beginning Friday at the Orleans Arena, both Pepperdine Basketball teams will compete for their respective WCC crowns.

Each team is looking for a spark of magic, as the men’s team lost four of their last six games and the women have lost four in a row entering the tournament.

Here is a guide to the tournament for Waves fans:

1. Both Pepp teams have the same seed

Therefore, both teams have an opening-round bye in the WCC Tournament and play their opening game in the second round Friday. The women will play Saint Mary’s, the No. 7 seed, at 2 p.m., while the men will meet Santa Clara (No. 7) at 8 p.m.

2. The men need a big run to have a chance at the postseason

Entering the season, the Pepperdine men were “under consideration” as an NCAA Tournament team and picked to finish fourth in the WCC.

Five months later, the team seems to be on the outside looking in, as a berth in the National Invitation Tournament (NIT) or even the CollegeInsider.com Postseason Tournament (CIT) seems unlikely. Considering the NCAA Tournament field includes 68 teams, the NIT invites 32 teams and the CIT fields 26 teams, the Waves may miss out on their first postseason appearance since 2016, as teamrankings.com puts the Waves at No. 144 in the nation.

However, there is one sure-fire way for Pepp to make the postseason: Win the WCC Tournament. The Waves have not done that since 1994, but they did get hot and put together an improbable three-game winning streak at Orleans Arena last season. Additionally in 2019, Saint Mary’s knocked off national No. 1 Gonzaga to win the title, ending the Zags’ streak of six-straight conference championships.

3. The women may have the better route to a championship game appearance

The men’s team swept second-round opponent Santa Clara this season, while the women split their season series with Saint Mary’s, losing by seven on the road and winning in overtime at home.

However, with the exception of top-seeded Gonzaga, the WCC women’s field has more parity, and the Pepperdine women wouldn’t face Gonzaga until the conference title game.

Should they beat Saint Mary’s, the women will play Saturday against No. 3 Brigham Young (BYU), who beat the Waves by only two in Provo, Utah, on Feb. 27. Win again and they’ll play in the semifinals against No. 2 San Diego, with whom Pepperdine split the season series, beating the Toreros handily at home and falling narrowly on the road.

On the other hand, if the men defeat their first opponent, they’ll meet No. 3 Saint Mary’s in the quarterfinals and potentially No. 2 BYU in the semifinals. ESPN currently projects Saint Mary’s as a No. 8 seed in the NCAA Tournament, while BYU is projected as a No. 6 seed, and they are ranked No. 15 in the latest national poll. The Gaels have won nine of their last 12 games, losing only twice to Gonzaga and a tight game at BYU, while Cougars are on a nine-game winning streak, including two dominant wins over the Waves.

4. This is the final ride for Kam Edwards, Paige Fecske, Barbara Sitanggan and a handful of other Pepp seniors

Forward Kameron Edwards and guard Paige Fecske have been at Pepperdine since 2015, while point guard Barbara Sitanggan arrived as a freshman in 2016. Five other players on the two teams have since joined the Waves and are also on their final run: Robbie Skead, Deezha Battle, Hannah Friend, Ashleen Quirke and Tara Dusharm. This tournament will likely be their last few games in a Pepp uniform.

Edwards, Sitanggan and Fecske have seen coaching changes (both programs), lows (Men’s Basketball going 2–16 in the WCC in 2018) and highs (Women’s Basketball making a WNIT run in 2019).

This season, the conference office named Sitanggan to the All-WCC First Team and Edwards to the Second Team. Fecske eclipsed the 1,000-point mark this season, while Sitanggan became the program’s all-time assists leaders.

These three are the few Waves who remained at Pepperdine through the many changes in the past few years, and their final games will be undoubtedly bittersweet.

5. Colbey Ross has a chance to etch himself into the eternal Pepp record book

Junior point guard Colbey Ross has had an exciting season: preseason and postseason All-WCC First-Team, WCC Player of the Week in late December, a career-high 38 points against USC, a buzzer-beating three-pointer against San Diego and breaking Pepperdine’s all-time assists record.

He enters the tournament leading the WCC in assists per game (7.2) and second in scoring (19.8 points per game).

There is one milestone Ross has been chasing this season, which he may have a chance to eclipse: the Pepperdine all-time scoring record, currently held by Stacy Davis. Ross remains 84 points short of the record, so it would require Pepperdine to win at least a few games or make a postseason appearance for him to break it prior to his senior season.

6. The women spread the wealth

The women’s team doesn’t have a player averaging more than 11 points per game, but they have four averaging at least nine: Friend, Sitanggan, sophomore forward Malia Bambrick and junior forward Monique Andriuolo.

The Waves have a good turnover margin (+4.6), but the shooting can hamper the team at times, as the field goal percentage (37%) ranks in the bottom fifth in the nation and their 66.5% from the free-throw line is well below the national average.

To defeat BYU, the defending conference champions who only allow 54 points per game, the Waves will need to move the ball offensively and run the floor to overcome cold-shooting spells.

7. The men are streaky

The Pepperdine men have played national powerhouse Gonzaga close twice this season and nearly defeated then-No. 14 Arizona on Thanksgiving, but they also lost at home to a mediocre Sacramento State team and on the road to a terrible San Jose State team.

College basketball is unpredictable, and the men have dealt with some injuries this season, but to consider this much-hyped season a success, they need to get hot.

8. Kristen Dowling laid a good foundation in her first season

Kristen Dowling joined Pepperdine Women’s Basketball with the challenge of following one of the best seasons in program history. She had seven new players to work with in her first season.

Dowling’s Waves have battled all season long, falling in some close games and rarely being on the wrong side of a blowout. Though she’ll lose Sitanggan, Fecske, Battle, Friend and the other seniors, Dowling has continued to develop younger players.

Andriuolo earned a WCC Player of the Week award and dropped 30 points and 17 rebounds in a conference win over Saint Mary’s. Bambrick is shooting 37% from three and hit a buzzer-beater to beat Eastern Washington on the road. Jayla Ruffus-Milner earned All-WCC Freshman Team honors.

With these returners and her first recruiting class, Dowling has a good chance to return the program to the ranks of conference contenders in 2021.

Lorenzo Romar came to Pepperdine in 2018 with a wealth of experience at the height of college basketball. He coached multiple NCAA Tournament teams at Washington though never advanced beyond the Sweet Sixteen. He also won an NCAA championship as an assistant coach at UCLA in 1995.

Though Romar has engineered a turnaround and high expectations within the Pepperdine’s men’s program, the team still lacks a big win over a nationally-ranked opponent. The men are combined 1–9 against top-tier WCC teams Saint Mary’s, BYU and Gonzaga over Romar’s first two seasons, with a 16-point average margin of defeat.

The 2020 WCC Tournament would be a good time for that statement victory to arrive.

10. The WCC is a mid-major powerhouse

The men’s side of the West Coast Conference boasts three potential NCAA Tournament teams and a national No. 2-ranked team. ESPN went as far as considering it a “power conference” should the top three continue to battle with each other and make noise in March.

On the women’s side, Gonzaga is 28–2 and may host the first two rounds of the NCAA Tournament.

In short, winning a conference tournament title would be a major accomplishment for Pepperdine, which hasn’t done that since 2006 (women’s) and 1994 (men’s).

Pepperdine’s second-round WCC Tournament games Friday are available to watch in Southern California on the WCC Network. The semifinals of the men’s tournament will be broadcast live on ESPN2 on Monday, while the men’s and women’s championship games will be shown Tuesday on ESPN and ESPNU, respectively.