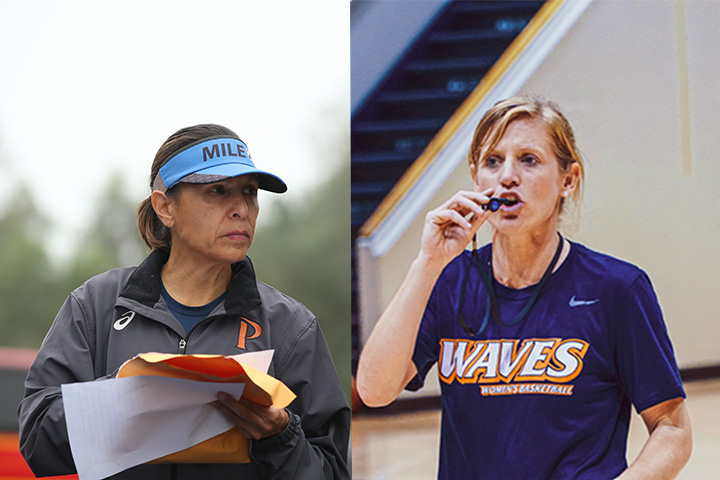 For the second-straight year, Pepperdine welcomes multiple new head coaches to the athletics staff. Both Kristen Dowling of Women’s Basketball and Sylvia Mosqueda of Men’s and Women’s Cross Country/Track have been on staff at Pepperdine in previous years and have head-coaching experience.

Dowling gears up for her first Division I coaching opportunity

Dowling graduated from the University of Redlands in 2004. As a senior on the women’s basketball team, she took the Bulldogs to their second-ever Southern California Intercollegiate Athletic title.

In seven seasons, she posted an immaculate record of 147-46. Dowling was hired in July after Delisha Milton-Jones took an assistant job of her own at Syracuse.

Dowling said she is excited to be back in Malibu for the upcoming season.

“The place and the people are still incredibly special,” Dowling said. “I am amazed by the volume of resources available to our Pepperdine students and student-athletes. I am most looking forward to working with great people and talented student-athletes to build upon the success they had last year.”

Dowling talked about her two biggest takeaways from her time at Claremont-Mudd Scripps that she plans to use at Pepperdine.

Pepperdine lost its leading scorer of the 2018–2019 season in Yasmine Robinson-Bacote, the first Wave to win West Coast Conference player of the year in 15 years. Even though Dowling did not coach Robinson-Bacote, she is up for the challenge of replacing the star player.

“It’s always tough to lose a great player of that caliber,” Dowling said. “But it’s a great opportunity for other players to step up. We return two All-West Coast Conference players in Barbara [Stanggan] and Malia [Bambrick].”

Dowling also talked about the objectives she and the team have for the season.

“One of our goals is to play in the WCC Championship and then in the postseason,” Dowling said. “But our more important goal is to have a great culture where student-athletes pursue excellence both academically and athletically.”

Sylvia Mosqueda is the other new head coach on campus. She was hired as an assistant track and cross country coach last offseason. She was promoted to head coach after Robert Radnoti retired after 13 seasons.

As an athlete, Mosqueda attended California State University, Los Angeles. In 1987, she won the NCAA Cross Country Championship and the Women’s outdoor 10,000 meter in 1988. Her time of 32:28.57 was an NCAA record for 30 years.

Mosqueda said she was surprised that she was given the head coaching position only a year after being hired as an assistant.

“In the process, I was very nervous,” Mosqueda said. “I knew that Robert [Radnoti] had retired, and I was shocked when I got interviewed and went through the whole process. It’s worked well for me so far, and even though I’m more of a track coach, it’s been great to work with cross country too.”

Mosqueda said she is pleased with the work her teams have put in leading up to the season.

“Our men have been doing an unbelievable job,” Mosqueda said. “The women have been fantastic too. Just about every morning, I work them out really hard. It’s like we’re on repeat because there’s no time to rest right now. We plan to jump up a few notches in conference, so we’re going to continue to work.”

Cross country and track had promising recruiting classes, and both teams bring back many of their key runners from last season. Mosqueda said she is ready for their talents to shine.

“Cole Stark is one of our most talented recruits,” Mosqueda said. “The work that we’re doing is tough for him now, but he’ll have a good season. Skyler Danley and Olivia Miller are also some exciting girls coming in. And also Jackson [Felkins], who’s a sophomore, is a beast. His form isn’t there, but he’s going to be an X-factor. Karl Winter [Pepperdine Graphic Sports Writer] and Kyle McCabe [Pepperdine Graphic Sports Editor] work so hard too, and they’re really going to contribute.”

Mosqueda also talked about the special attributes of her group.

“We’re unique in how smart that we are,” Mosqueda said. “It’s such a bright group. And we’re also different in how united we are. They’re so tuned into the program, it’s like they’re becoming a family. It used to be that the women’s and men’s teams were very separate. This season, we’re so much closer, and it means more to the runners.”

Pepperdine Cross Country began their season Saturday, Aug. 31 at the Mark Covert Classic. The men’s squad took sixth place out of 19 teams, and the women finished 10th out of 21. Their next meet is Saturday, Sept. 14 at the University of California, Riverside Invitational.

Pepperdine Track will travel to New Mexico on Saturday, Jan. 18 for the Dr. Martin Luther King Jr. Invitational for an indoor race against 16 teams.