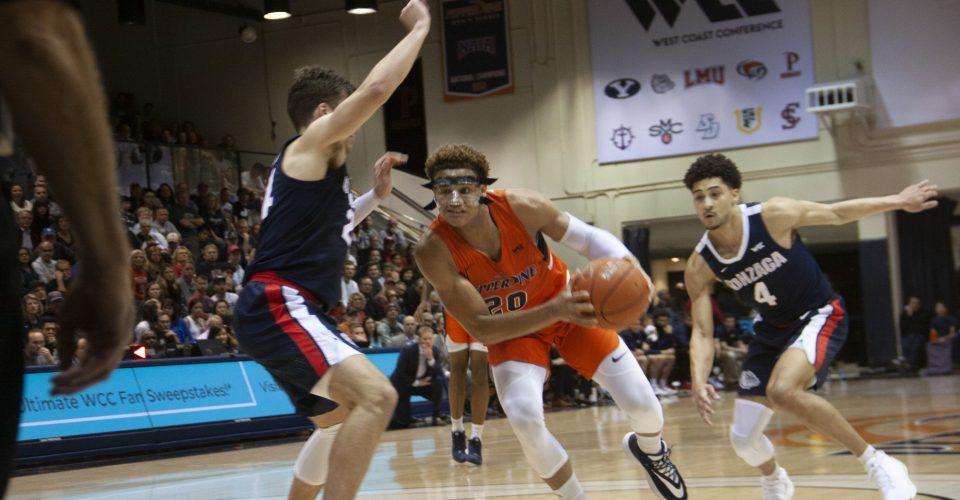 For the third time this season, Pepperdine Men’s Basketball went shot-for-shot with one of the best teams in the country. While the Waves lost by 12, the game hung in the balance for the entirety of the first and the majority of the second half.

Earlier this season, Pepperdine was just a Colbey Ross three-point buzzer-beater away from taking the Bulldogs to overtime in the McCarthey Athletic Center.

The Waves also lost by two to the Arizona Wildcats in November, at the time the No. 14 team in the country. Saturday, in a rare sellout contest at Firestone Fieldhouse, the Waves again had an opportunity to pull off an upset. Ultimately, one of the nation’s best teams executed that much better down the stretch, increasing their win streak over Pepperdine to 39 games. 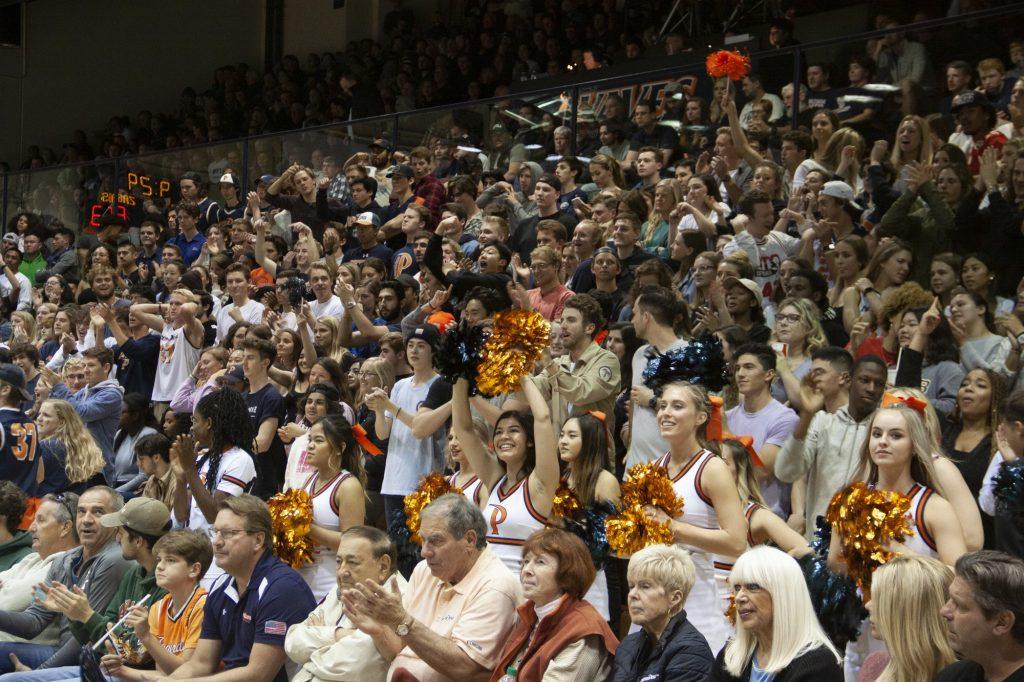 The Pepperdine faithful watch in anticipation during the second half versus Gonzaga.

Unlike on Thursday versus USD, Pepperdine’s offense did not struggle to score early. The Waves went after the bigger Bulldog frontcourt, scoring 12 of their first 18 points in the paint. 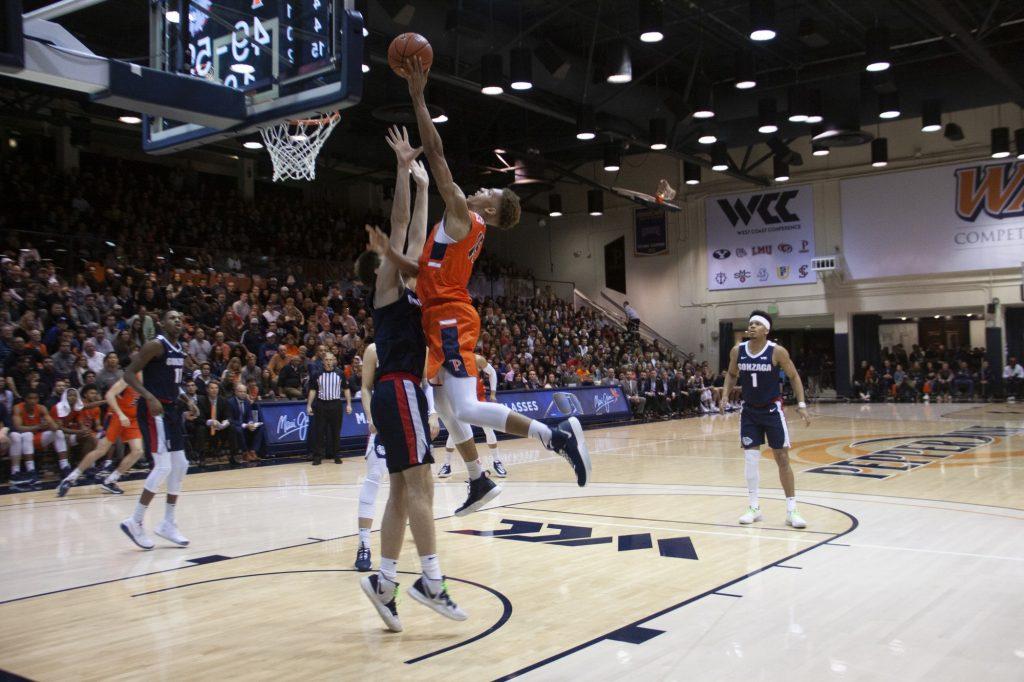 Sophomore forward Kessler Edwards skies for the left handed finish in the paint.

Gonzaga responded by exposing Pepperdine’s weakness of a true, defensive-minded center in their starting lineup, and constantly fed their 6’11” sophomore center from Serbia, Filip Petrušev. Petrušev’s role has increased this season after his teammate and star big-man Killian Tillie injured his ankle Jan. 30 versus Santa Clara. Tillie dressed for the game and went through warmups, but Gonzaga Head Coach Mark Few chose to sit him for at least another game.

Gonzaga isolated Petrušev one-on-one with a Pepperdine defender, predominantly either Kameron or Kessler Edwards. The sure-handed center often had his way with both and scored 11 of the Bulldogs’ first 19.

“We definitely had mental errors on coverages,” Head Coach Lorenzo Romar said. “As the coach, I’ve got to do a better job of making sure the guys know what they are. A couple times it was rotations.”

Pepperdine also got into foul trouble. With 8:25 left in the first half, Ross picked up his second foul and was subbed out until the last two minutes of the half.

With Ross on the bench, the Pepperdine offense continued to have pace and space. In the first half, seven of the eight Waves who stepped onto the court scored at least once.

An energy surge off the bench was sophomore guard Daryl Polk Jr., who played all but five minutes of the first half, scored on one layup, had an assist and grabbed five rebounds, which led to multiple instances of Pepperdine pushing the ball and challenging Gonzaga’s transition defense.

Polk Jr. said he embraces making the plays that don’t always light up the stat sheet.

“My role came through me working hard and doing some of the dirty work,” Polk Jr. said. “That’s what gives me confidence — coach is always on me about doing the little things, and if I can do them, it makes things easier for the team.”

Pepperdine’s biggest struggle was cashing in from behind the three-point line. The Waves started 0–6 from downtown and went into the second half 1–8. Although Gonzaga has the fifth-best three-point field goal percentage in college basketball, they did an excellent job not forcing the long ball and went into the half shooting 3–7. 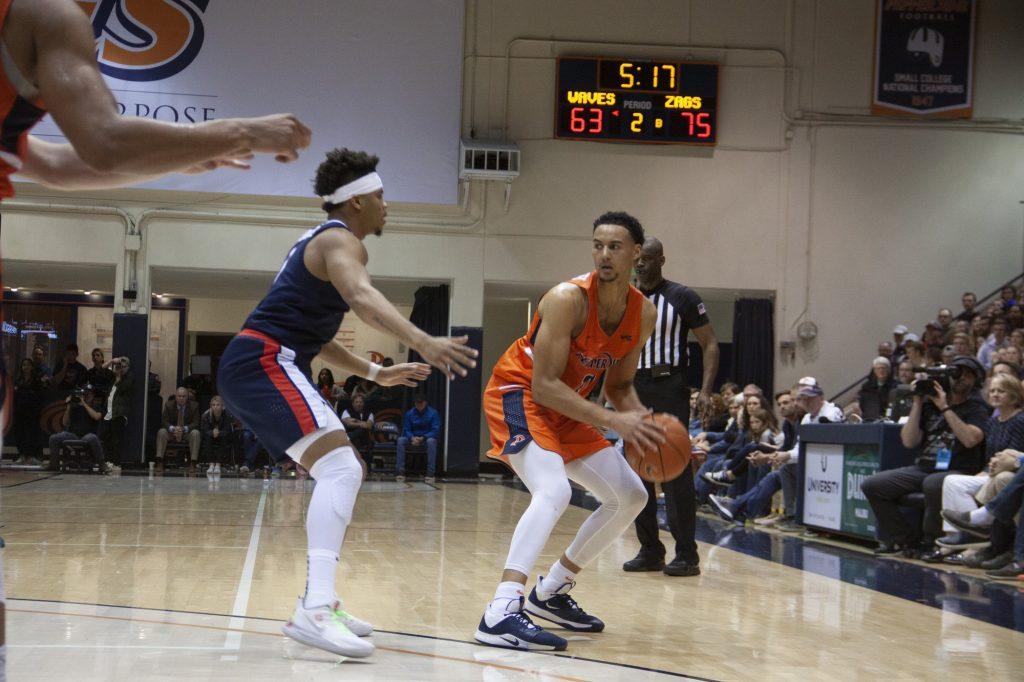 Petrusev played the entire first half and scored 20. Gonzaga led at halftime, 40–36.

Pepperdine scored the first two baskets of the second half to tie the score at 40. Despite Gonzaga being ultra-efficient and shooting nearly 50% from the field, the Waves continued to fight.

“We competed for the entire game,” Ross said. “We played all 40 minutes extremely hard. Everyone’s going to get something out of the game if you play like that.”

As the second half rolled on, the Waves’ offense continued to struggle from three while Gonzaga buried five of 10 attempts.

A huge factor in the game was the officiating. There were constant bang-bang plays in the second half where the referees would blow their whistles, which not only slowed Pepperdine’s defensive tenacity but gave Gonzaga easy points from the free-throw line.

The Bulldogs were in the bonus with eight minutes remaining in the game. Pepperdine finished with a total of 20 personal fouls. 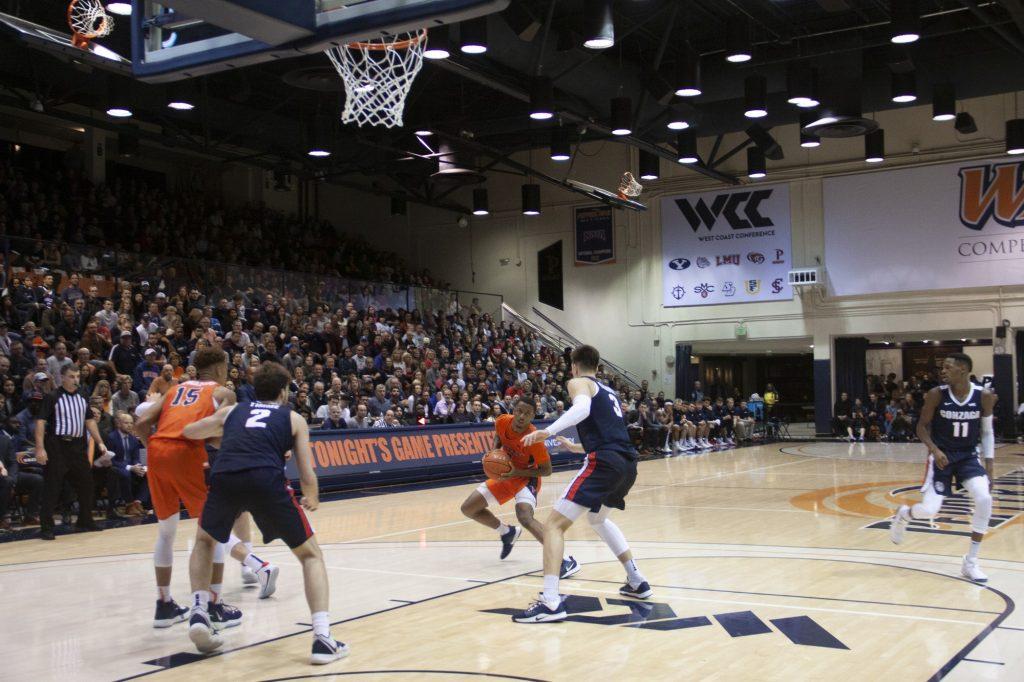 Gonzaga’s offense played even better in the second half, and the Waves could not catch up. Ross said a lot of Pepperdine’s self-inflicted errors were a factor in the loss.

“That’s a good team we just played,” Ross said. “We had too many mental mistakes, and they capitalized on it. Regardless of how good they are, we had a lot of chances but couldn’t get it done.” 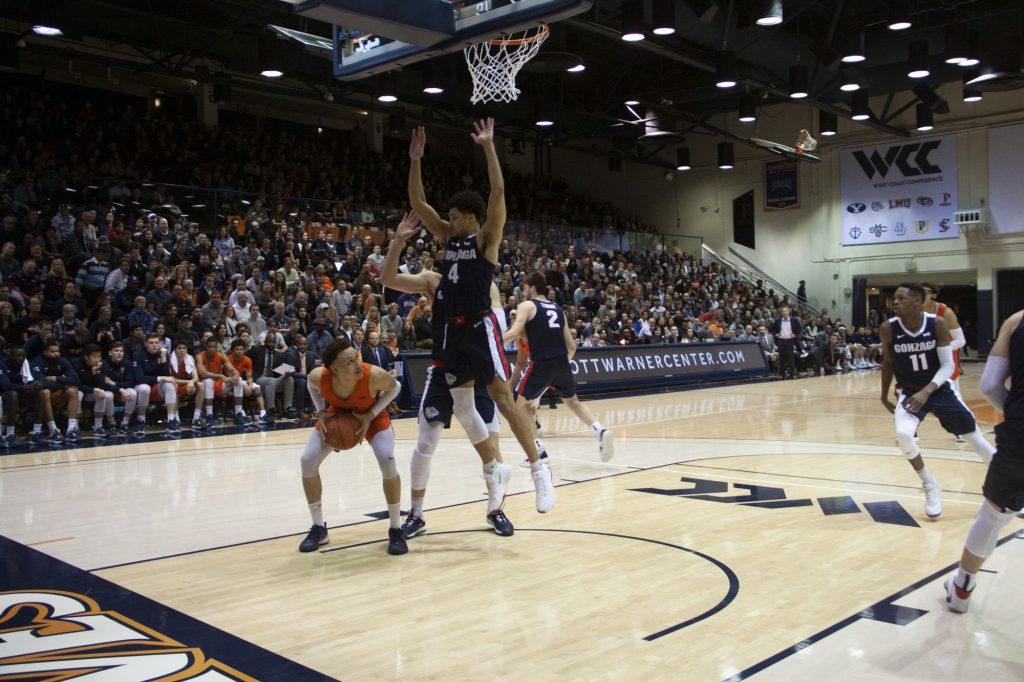 Junior guard Colbey Ross gets his defender to jump with a pump fake.

On the Pepperdine Basketball staff, there’s a coach who’s extra familiar with Gonzaga — second-year Graduate Manager Connor Griffin played there from 2013 to 2015.

“It is a little weird at times, but for the most part, it’s always nice to see them,” Griffin said. “They come up to me and joke with me about being a traitor and things like that. But I learned a lot from those guys, and I’ve been able to carry that over here and make some suggestions to our staff.” 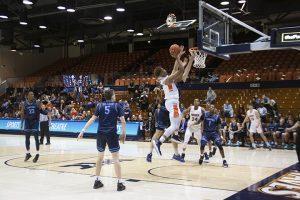 Sophomore forward Kessler Edwards goes over the Torero defense and finishes above the rim. Photos by Taylor Gather In...
Copyright 2013 Jupiter Premium Magazine Theme
Back to top