I shouldn’t be writing about this. After at least 12 years of filling out brackets, running my own March Madness bracket pools and watching quite a bit of college basketball, I’ve never won a single thing during March Madness.

Some years I’ve overthought my picks, some years I’ve picked mostly randomly and some years I thought I had a perfect balance … and then my championship team lost in the first round (that would be you, 2013 Georgetown Hoyas). However, given my wide range of failures, like Edison and the lightbulb, I’ve learned quite a bit along the way.

So, without further ado, here are my tips to approaching your bracket for the 2019 NCAA Division 1 Men’s Basketball Tournament:

A 2016 report by Davidson professor Tim Chartier found that 76 percent of upsets (a team seeded lower than No. 9 beating a team seeded above them) throughout the tournament since 2002 come from teams seeded 10, 11 or 12.

However, while these teams have a better chance of making it to the Sweet Sixteen and beyond, teams seeded 13, 14 or 15 have actually won 57 first-round games since the NCAA men’s tournament expanded to 64 teams in 1985 (it is now 68 teams), based on a 2018 Jack Johnson article on betfirm.com combined with the 2018 tournament results.

Statistically, that means that one or two teams seeded lower than 12 will win a first-round game each year, so make sure to pick at least one wild game. Last year, a No. 16 seed even upset a No. 1 seed for the first time in history.

DON’T: Pick an underdog to win the national title.

While Cinderella teams and upsets run rampant in the first two rounds of the madness, bracket challenges are won and lost in the Elite Eight and beyond. Big upsets get less and less likely later in the tournament. Since 1985, 30 of the 34 national-championship winning teams have been seeded No. 1, 2 or 3 in the tournament, while No. 7 Connecticut in 2014 is the only national champion since 1997 to be seeded lower than No. 3.

DO: Pick the ACC.

The Atlantic Coast Conference (ACC) is both currently and historically the best conference in men’s college basketball. Since 1985, the ACC is the only conference with a double-digit number of national champion teams, and ACC teams also have the best winning percentage against other conferences in the tournament, according to an October 2018 Daniel Wilco article on the NCAA website.

There are currently 6 ACC teams ranked in the Associated Press Top 25, tied with the Big Ten for most in college basketball. Three of those ACC teams (Duke, Virginia and North Carolina) are in the top 8, while the Big Ten only has one team (Michigan) in the top 8.

Not only is the Pac-12 Conference the worst of the “Power Five” conferences in terms of historical inter-conference winning percentage in the tournament, according to the Wilco article, but there are currently zero Pac-12 teams in the AP Top 25. In fact, there are only two schools located west of Kansas in the Top 25: Gonzaga of the West Coast Conference and Nevada-Reno of the Mountain West Conference.

Nevada could be an interesting sleeper pick to win a few games, but the Wolfpack have never reached the Elite Eight in the school’s history. Gonzaga did reach the national title game in 2017, but still has trouble shaking the label of a team who tends to fall short of its billing in the tournament. Pepperdine men’s basketball faces a stiff test at Gonzaga Thursday night.

DO: Pick blue and orange teams.

If you enjoy simply picking teams based on color scheme, Pepperdine’s school colors are the way to go. Since 1985, 25 national championship teams have had blue or orange as their primary school color, compared to only nine championships for every other color combined.

Between 1986 and 2017, blue and orange schools also had the best two winning percentages against other colors, according to Wilco’s March 2018 article. If it comes down to colors for you, go with the orange and the blue.

You have a in 9.2 quintillion chance of picking a perfect bracket, according to USA Today. Those who are most confident in their bracket tend to be most disappointed. Your bracket will inevitably be busted, more than likely after one or two days of madness. Don’t worry, bracket pools are graded on a curve: you don’t have to be great; you just need to be better than everyone else.

Though neither Pepperdine team has an extremely strong chance to make the Big Dance this season, each one could do so by winning the West Coast Conference tournament March 7-12 in Las Vegas. The Pepperdine women, currently fourth in the WCC, play the Pacific Tigers Thursday in Firestone Fieldhouse at 7 p.m. 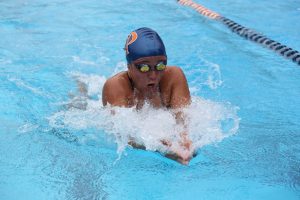