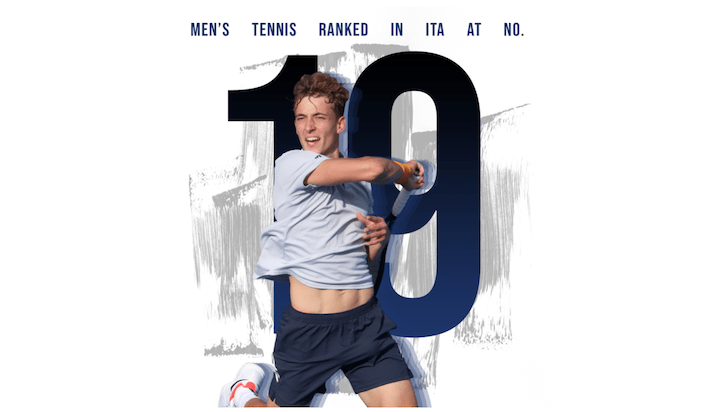 Pepperdine Men’s Tennis, ranked No. 19 in the country when their season ended, was one of six Pepperdine teams ranked in the top 20 at the time. Senior Adrian Oetzbach, pictured above, finished the spring season undefeated in singles, doubles and team matches.

Though the sudden end to athletic seasons and careers was heartbreaking for many student-athletes and coaches, Pepperdine athletic teams accomplished much during the shortened seasons.

At the time of the NCAA decision to cancel the remainder of winter and spring sports seasons as a result of the COVID-19 pandemic, at least two Pepperdine teams were in the midst of postseason runs — one was ranked No. 1 nationally, one had the No. 1 ranked individual in the nation and one was the only undefeated team in Division 1.

Though it is trite to speculate about what could have been, coaches recognized their team’s achievements during the time they had together.

Both Pepperdine Basketball programs competed well at the West Coast Conference (WCC) Tournament, with the women upsetting Brigham Young (BYU) en route to a semifinal appearance and the men pushing No. 3 seed Saint Mary’s to the brink in a thrilling double-overtime quarterfinal loss.

The two teams each finished sixth in the WCC in the regular season and with nearly identical final records: 16–15 for the women, 16–16 for the men.

The WCC is one of few conferences that were able to crown a conference tournament champion prior to coronavirus-related cancellations.

When the NCAA canceled winter sports championships March 12, the Waves men prepared to play in the College Basketball Invitational tournament, which would have been the program’s first postseason appearance since 2016.

The women hoped for an invitation to the Women’s Basketball Invitational, which was also canceled. Nonetheless, first-year Head Coach Kristen Dowling was proud of the way they team competed at the WCC Tournament.

“I was glad we went out on a high note,” Dowling told Graphic staff writer Paxton Ritchey.

Despite the competition being held without fans due to COVID-19 concerns, the Waves started well Thursday, March 12. Freshman Julianna Birlin smashed the school record by more than a second in the 100 individual medley, swimming 59.05 seconds.

“When I looked up at the board, I was pleasantly surprised,” Birlin said. “I think all of our girls who did get to swim were pretty happy.”

Between preliminary heats and the finals that evening, the NCAA cancellation news broke. The CSCAA announced that Thursday night’s finals would go forward but the remainder of the meet would be canceled.

The Waves remained at the Busbey Natatorium at Cleveland State University to swim the 200-freestyle relay. Then the team had to get back to Malibu to vacate their dorms within three days.

“We all had varying degrees of anxiety about being able to get home,” Birlin said.

They flew back early in the morning March 13. The strong showings at the conference and national meets capped off a season marred by the departure of the team’s head coach and an assistant coach.

The men were in the middle of a rain delay, prepared to take on No. 38 Arizona at home, when they received word that the remainder of their season had been canceled.

When that message came, Pepperdine Men’s Tennis was 11–0 in dual matches, the only remaining undefeated team in Division 1. The team moved from unranked throughout the season up to No. 19 in the final ITA poll.

Not only was it the first time the Waves were ranked in the top 20 since 2013, but it was the team’s best start since 2006, when the team went on to win the national title.

“Some of the most fun you can have is when you don’t have expectations,” Head Coach Adam Schaechterle said. “That was really sort of the magic of this season — we really didn’t have expectations or significant team goals, other than to just improve every day.”

Schaechterle lauded senior captain Adrian Oetzbach, who joined the program in 2018 as a transfer when Schaechterle was hired. Oetzbach finished the 2020 spring season in the rare, perhaps unprecedented, position of being undefeated in singles, doubles and team matches in all of the team’s dual competitions.

“When you have a player leaving, the best feeling you can have is this mixture of pride and also the bittersweet feeling that you’re going to miss a guy,” Schaechterle said. “That’s exactly the feeling I have with Adrian.”

Oetzbach has the option to return for another season at Pepperdine, but certainly returning are sophomore standouts Tim Zeitvogel — who was undefeated in dual singles matches for an entire calendar year between March 2019 and March 2020 — Daniel de Jonge, Enrique Luque Rico and Corrado Summaria, who was ranked as high as No. 47 in ITA singles rankings this season.

“We worked so hard to create a culture, and that 18 months of work on the culture really started to pay off this spring, where there was real tangible momentum,” Schaechterle said.

When the 2019–2020 season began, Women’s Tennis faced growing pains, as some players returned from injury and four of the six main rotation players were underclassmen.

Following a few losses to begin the spring season, the Waves began to roll, defeating four ranked teams in a span of two weeks, including a 7–0 drubbing of No. 4 Texas.

“We had a couple of bumps in the beginning of the year, but that was expected, just because of the experience,” Head Coach Per Nilsson said. “And then things were really starting to come along. That was probably the most disappointing thing — knowing that we were really improving and the younger players were figuring things out.”

Individually, the Waves were stellar, with three players ranked in the singles top 35, including No. 1 Ashley Lahey, a senior who only dropped one singles match throughout the fall and spring seasons.

“[Lahey] was putting together an incredible year, maybe one of the best ever at Pepperdine for anyone,” Nilsson said. “[It’s] sad to see her not being able to finish it, because I think she was by far the best player in the country.”

Regardless of whether Lahey and fifth-year senior Jessica Failla choose to use their extra season of eligibility, Nilsson’s program will remain in the hunt for a national championship in 2021.

Men’s Golf finished the shortened season at the pinnacle of college golf: No. 1 in the country, for the first time since their 1997 national title.

Golf Digest, Golf Channel and the Los Angeles Daily Times each documented the difficult ending for Theegala and the Waves.

Though Theegala and fellow senior standouts Joshua McCarthy and Clay Feagler may depart, young guns including Mouw and fellow freshman Dylan Menante now have a taste of glory.

“The bar has been set,” Head Coach Michael Beard told the Los Angeles Times. “I think that there’s so many of the guys that have experienced that that I think that they will find a way to pull everyone else along to get to that top again.”

Entering WCC play, Pepperdine Baseball was off to the program’s hottest start since 2001, earning a spot in the national rankings for the first time since 2014.

The team moved from unranked all the way to No. 16 in Baseball America’s rankings, starting 12–3 and taking a series from previous No. 16 Michigan.

“When you compare [it] to other years of baseball that we had, this is one of the better starts,” sophomore shortstop Wyatt Young said. “To see everybody, in the locker room when we had our [final team] meeting, watery-eyed and everything, it was just extremely sad moments, especially for the coaches.”

Fifth-year Head Coach Rick Hirtensteiner‘s squad may have the most volatile summer of any Waves program, as senior stars including starting pitcher Wil Jensen and infielder Aharon Modlin will graduate, while key juniors including Billy Cook and Mike Malinchak have the option to enter the MLB Draft.

Head Coach David Hunt said the 2020 season was “vastly different” than the previous two years for his Waves Men’s Volleyball team as they transitioned from a veteran group that finished No. 3 in the nation to a young group.

“We saw a lot of growth throughout the year both personally and volleyball-wise,” Hunt said. “And I’m bummed that it was cut short just because that trajectory and that growth arc was moving along well.”

The Waves finished ranked No. 8 in the country despite an overall record of just 8–6, as Pepperdine was beaten by powerful programs including No. 4 Long Beach State, No. 1 BYU and No. 3 UC Santa Barbara (twice).

Many younger players, including true freshmen and redshirt freshmen, were able to see time on the court in 2020 and experience elite-level volleyball. The team included only two seniors, outside hitter Noah Dyer and setter Rob Mullahey, and one graduating junior, setter Ben Hancock, each of whom could theoretically return.

Following the season’s cancellation, the team suited up for a final scrimmage March 13, underclassmen versus upperclassmen, to honor the seniors.

“It gave our guys a nice sense of closure to the season,” Hunt said. “A lot of the families were already here, and so it just worked out perfectly, and we were able to spend time with each other and just acknowledge what those guys have done for us.”

One of the most proud programs at Pepperdine, Beach Volleyball was off to a less than ideal start, just 2–5 and down from No. 6 to No. 10 in the nation.

Nonetheless, following encouraging battles against No. 6 USC and No. 2 UCLA, the three seniors who had been on the team since a national runner-up season in 2017 were confident that the team could turn it around.

“Every year since [2017], we were like, that’s what we’re working for,” senior Gigi Hernandez said. “Even though our season wasn’t going necessarily in the direction of getting back to that, that was still the goal — that’s still the dream.”

Women’s Golf made progress as a young team in 2020, finishing second in two fall tournaments and in the top 15 in each of three spring tournaments.

Coming off a WCC championship in 2019 and having added freshman Reese Guzman and junior transfer Megan Dennis, the Waves hoped to defend their title.

“You never really know when the last tournament is going to be,” lone senior Momoka Kobori said. “It was definitely a big shock because we were expecting to get into postseason and go to conference, regionals and hopefully nationals.”

Kobori will graduate, and freshman Alexa Melton plans to transfer to USC, but the other four Waves will return to Pepperdine in fall 2020 for 27th-year Head Coach Laurie Gibbs. Guzman and Dennis each averaged slightly over 75 strokes per round in 2019–2020.

“We expected all of our distance records to be broken,” senior captain Jalen Frantal said. “Everyone was on pace to PR [run a personal record] by a significant amount. It’s just really, really disappointing to have worked so hard and not even be able to see the results of our hard work.”

Nine seniors will graduate from the track team, but the returning core and Mosqueda’s first recruiting class provides hope for a bright future in both track and cross country.