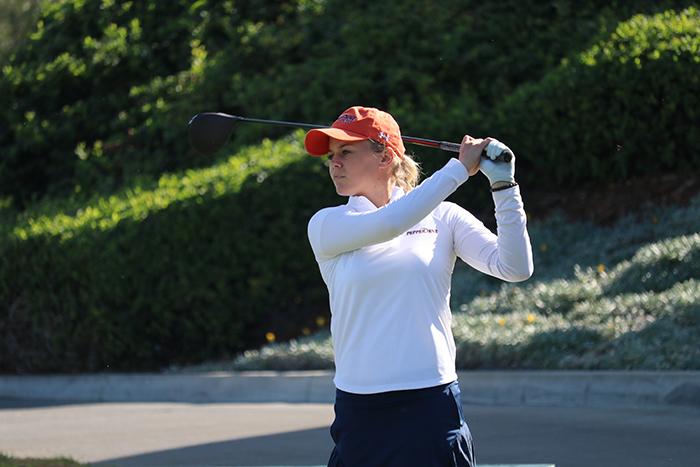 Megan Dennis is one of four international players on a six-woman golf roster. Photo courtesy of Pepperdine Athletics

The journey from youth player to the collegiate ranks for any Pepperdine student-athlete is long and full of hard work. For a growing number of Waves, that path starts thousands of miles away from Malibu.

“I think it’s common for people to want to come over to the U.S., just because of how good the structure and everything is,” said junior women’s golf player Megan Dennis, who is originally from Bedfordshire in the United Kingdom. “The tournaments, practice schedule, the weather — … it entices people to come.”

These students can face significant transitional challenges, but they bond with their teammates over their common goals and become inspired by the different cultures they encounter.

The NCAA tracked trends in participation levels of international athletes, which included measuring the percentage of athletes on NCAA Division I rosters across 16 sports who are from a “non-U.S. country of origin” as part of a 2019 study. 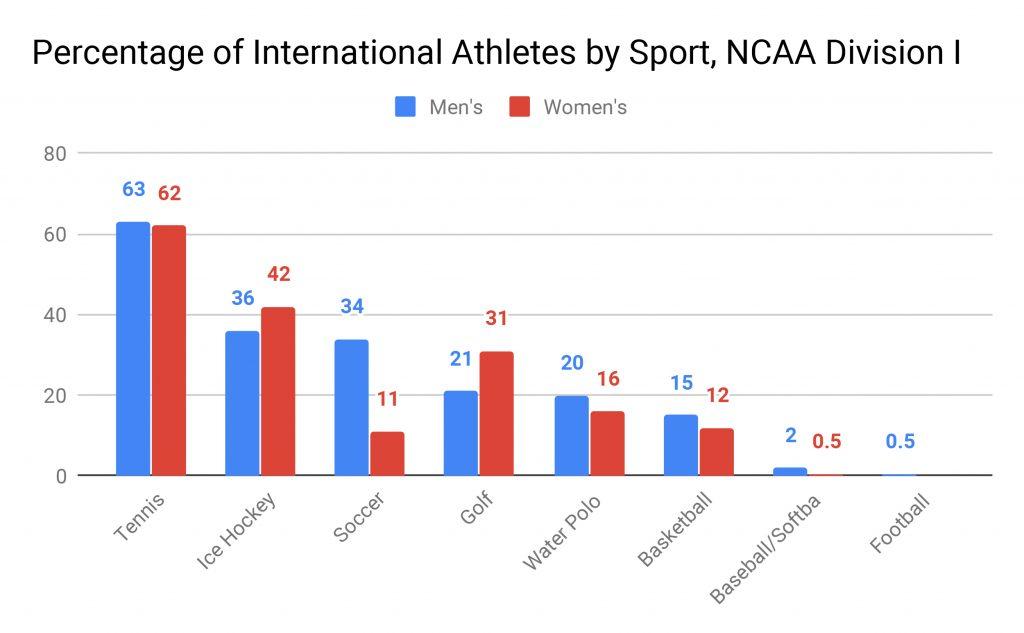 Tennis leads the charge by far with over 60% of both men’s and women’s college players coming from outside the United States. International participation in college tennis has been both an increasing trend and a source of controversy for many years, as some have raised questions as to whether the growing number of international players in collegiate tennis removes opportunities for American players.

Pepperdine follows this trend in both its men’s and women’s tennis programs. Seven out of nine players of the men’s roster are international, as well as four out of seven on the women’s roster.

For Men’s Tennis Head Coach Adam Schaechterle, the choice to go international was about finding players who want to come to Pepperdine but still align with the program goal of becoming a “top-10 nationally elite program.”

“Brand matters a lot more in American recruiting,” Schaechterle said. “In international recruiting, you have more of an ability to sell yourself as a coach, to sell the program and the vision you might have. These guys coming from around the world may not have such a clear idea of what the rankings are, or what football team is better or what program their uncle thinks they should go to.”

That’s not to say, however, that convincing international players to come play college tennis is an easy sell.

“[In Europe], college had this reputation of … if you went to college, you’re giving up your tennis career,” Zaar said. “But I think that mindset is changing. Now people think college is a good step in the direction of becoming a tennis player.”

For some sports, a U.S. college has always been a good step. Dennis made it a goal from a young age while growing up in the United Kingdom.

“I would say from the age of 13 or 14, a lot of the girls who were older than me, I was seeing [come to the United States],” Dennis said. “So I thought this could be a really good opportunity.”

In England, Dennis hired an agency to help with her recruitment.

“They filmed my swing and put my video compilation together, and then sent that out to the coaches in America,” Dennis said. “Then they attached my contact information so that the coaches could email me if they were interested.”

Dennis began her college career at Division II Florida Tech, a program that uniquely won a national title the year it was disbanded. After transferring to Pepperdine, Dennis said the level is certainly a step up from what she experienced in England.

AND THAT DOES IT!!!!@megan_dennisxo knocks in to secure the @NCAADII National Championship for Florida Tech!!!! pic.twitter.com/CMi4D2KrpK

Dennis said a big factor is the presence of the LPGA, the women’s golf professional tour, in America. Players want to try out the courses at the collegiate level and see how they do before jumping in.

But the transition for all of these athletes is about much more than just competition.

“There’s the weather, obviously,” Zaar said of her adjustment from Stockholm to Malibu. “It’s sunny and not cold here. But also, the culture in general [is different], with how people act and social norms.”

“America’s huge,” Dennis said. “They’re driving on the other side of the road. Even just the way people greet you and walk past you is different than how they would do it in England. People say things like, ‘Hey, how’s it going?’ and I just wouldn’t know how to respond or what to say, really.”

While Zaar and Dennis no doubt have learned from their own experiences, they also learn from the cultures of their new teammates, who hail from everywhere from Norway to Peru to New Zealand.

The intercultural meshing that occurs in several collegiate sports has a profound impact on even American-born players like Schaechterle.

“My experience at Northwestern as a student-athlete was really enriched by [international players],” Schaechterle said. “Just seeing the world from a different perspective, learning about different cultures firsthand … that’s something that heightened my experience, and I’m glad I had that opportunity.”