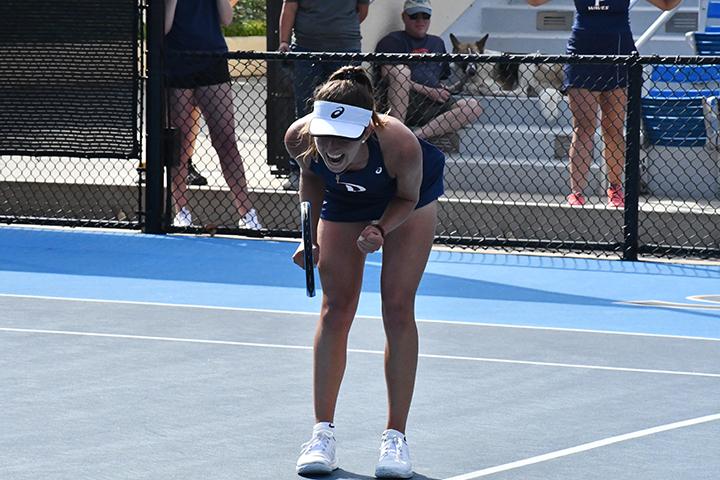 Graduate senior Jessica Failla celebrates her victory on court two, which clinched the victory for Pepperdine on Friday. Failla defeated the third-ranked player in the country, Texas senior Anna Turati, to win the match. Photos courtesy of Pepperdine Athletics

Pepperdine Women’s Tennis could do no wrong Friday at the Ralphs-Straus Tennis Center, and the No. 4 Texas Longhorns were no match for the best of the Waves.

With an enthusiastic home crowd, the No. 17 Waves won the doubles point and then took the momentum into the singles, winning each singles court and losing only a single set in the process.

“The whole men’s volleyball team was out here cheering for us, and it just made it such a fun atmosphere,” graduate senior Jessica Failla said. “People coming out and supporting us really does make a difference, and I think we could all really feel that today.”

Failla scored two of the biggest victories of the day, winning the clinching doubles match alongside sophomore Anastasia Iamachkine on court one and clinching Pepperdine’s victory with a straight-sets victory on singles court two.

Doubles has been a point of struggle for Pepperdine in the early part of the spring season, as the Waves dropped the doubles point in six consecutive dual matches prior to a Feb. 22, win against Cal-Berkeley.

As a result, the team dropped from No. 6 to No. 17 in the national rankings over the course of two weeks, following losses to Duke and Princeton indoors and Oklahoma State outdoors.

“We struggled there a little bit with some chemistry — new teams that we thought we would try out — and it wasn’t the right move, so we fixed it,” Head Coach Per Nilsson said. “That started showing last week, and today was even better, so we’re happy with that getting better each week.” 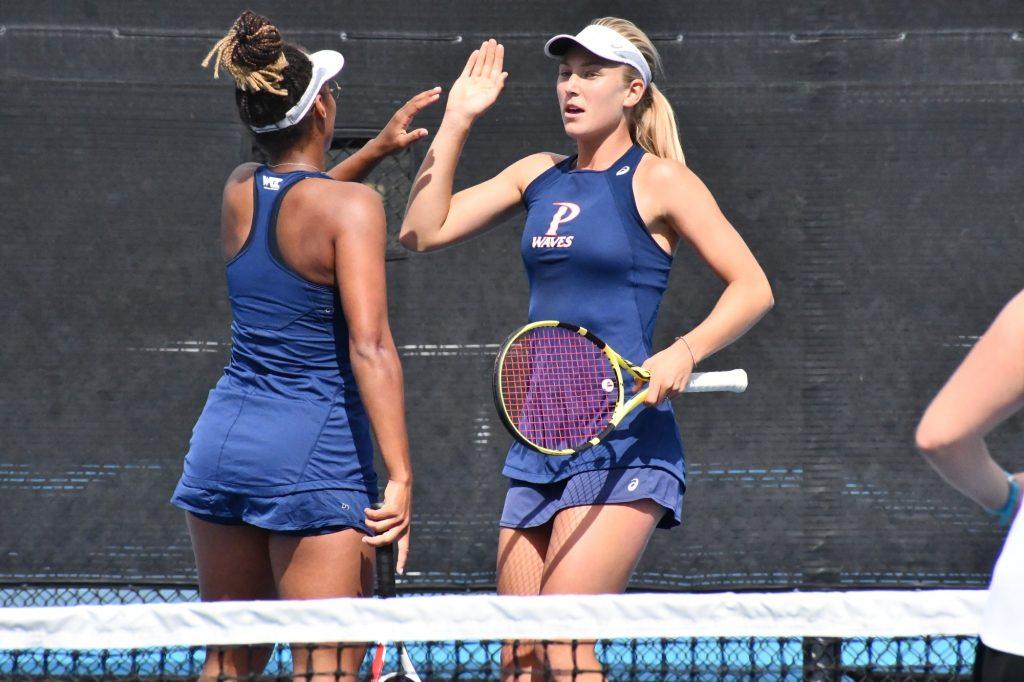 The Waves had no problem with the doubles point Friday, as senior Ashley Lahey and freshman Astrid Olsen won handily (6–1) on court two before Failla and Iamachkine beat the 20th-ranked doubles team in the country, Texas’ twins Anna and Bianca Turati.

Spurred by the home crowd, including a raucous (by tennis standards) Pepp Men’s Volleyball team, Failla and Iamachkine won 6–3. 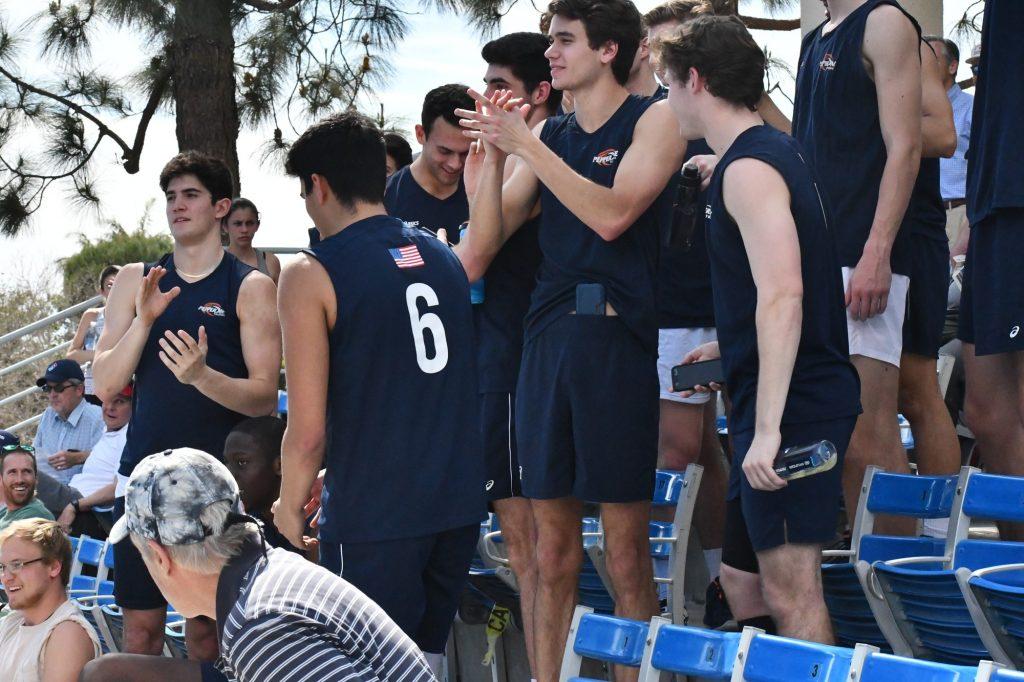 Several members of Pepperdine’s Men’s Volleyball team cheer during the doubles matches Friday at the Ralphs-Straus Tennis Center. The crowd helped Jessica Failla and Anastasia Iamachkine to clinch their doubles match on court one.

“We’ve been struggling with doubles, but we’ve been working like crazy on it,” Lahey said. “Our teams were playing really well, so it started out with such good energy that I felt like that continued on into the singles.”

When the singles matches began on a warm Malibu afternoon, the Waves remained on fire. Pepperdine won the first set on every singles court.

Iamachkine, the No. 45 player in the nation, was the first singles player to win, beating Adri Nagy in a dominant 6–4, 6–1 performance. It was the fifth victory in the past six singles matches for Iamachkine, who came off two consecutive WCC Player of the Week awards.

“We had a couple of spots playing well early in the year, and we had a couple of new players who weren’t used to what we were doing,” Nilsson said. “Astrid [Olsen] is coming along really well, improving each match.”

The attention of the crowd turned to court two, where Failla faced off with Anna Turati. Texas made an unorthodox decision to put Anna Turati, the nation’s third-ranked singles player, on court two against No. 53 Failla, while Turati’s sister Bianca (No. 26) played No. 2 Lahey on court one.

The Waves were unfazed, as Failla closed out an impressive 6–3, 6–1 win to give Pepp a 4–0 lead, clinching the match.

“It was a really big win for me — probably one of my best wins ever in college tennis,” Failla said. “It gives me a lot of confidence and just shows that my hard work is paying off.”

The victory helped Failla improve her individual collegiate ranking, as the most recent ITA rankings elevated her to the No. 35 spot.

“I think it was really important for [Failla] because she didn’t play that many college tournaments in the fall, so she didn’t have that many opportunities to better her own ranking,” Nilsson said. “[Court two] has been [Texas’] toughest out I think all year, and to be able to put in a performance like that is really fun.” 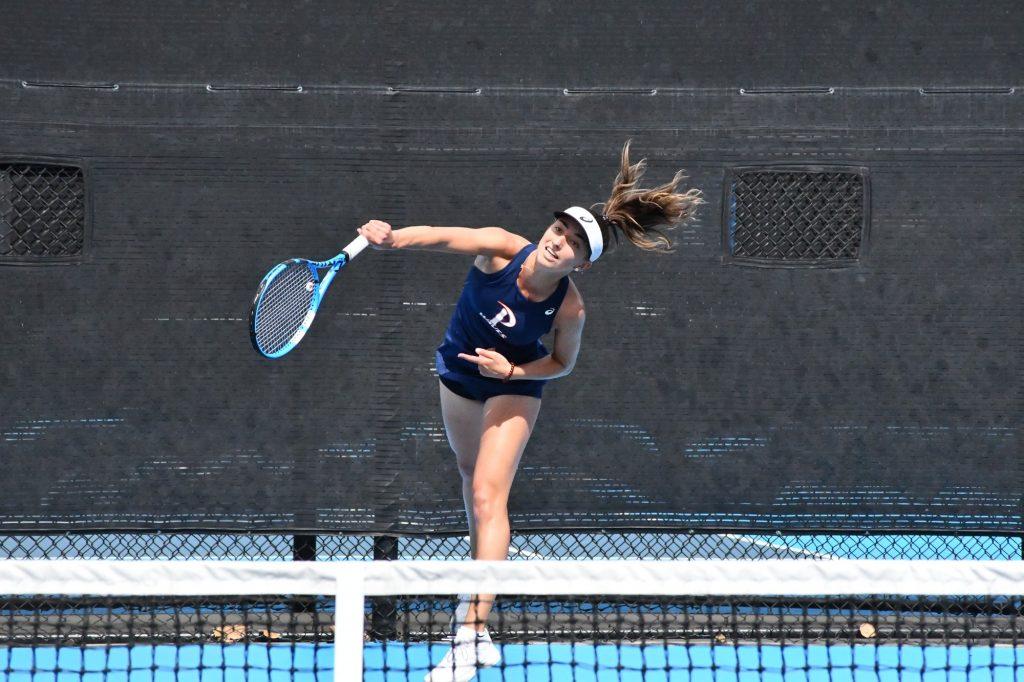 Because the match could also impact other players’ individual rankings, all singles courts were played out following Failla’s win, and Pepperdine continued to dominate.

Sophomore Daria Kuczer polished off the Longhorns’ Tijana Spasojevic in a tiebreaker (6–4, 7–6) on court six.

“Daria being able to close out that in straight sets was really fun,” Nilsson said. “The newer younger players are stepping up, which is what we need.” 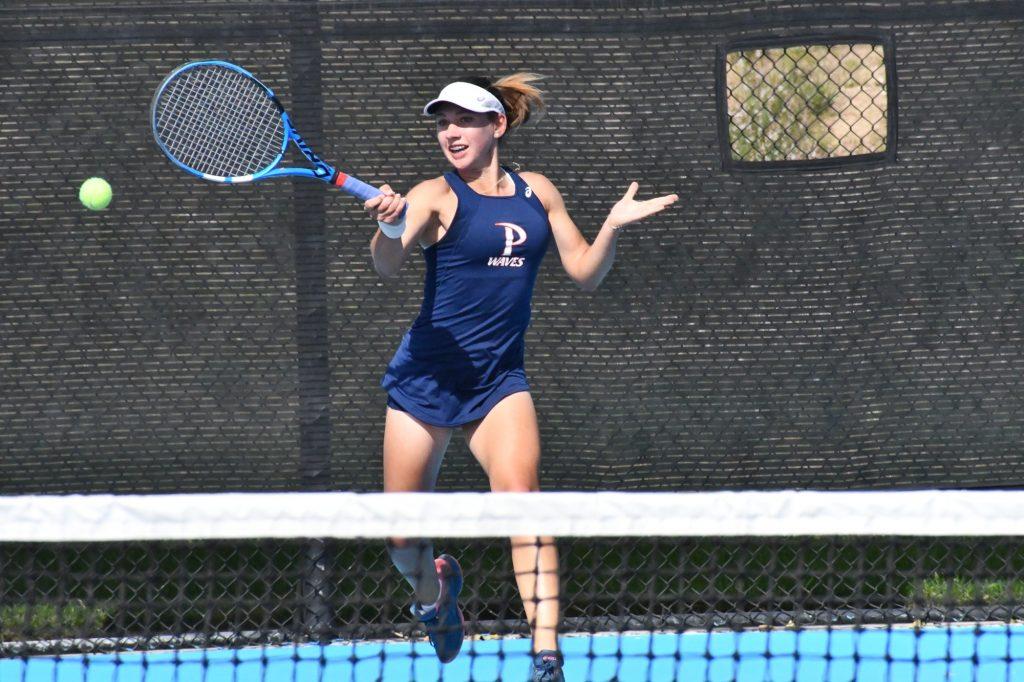 “I wasn’t feeling my best, and I know [Turati is] a really tough competitor,” Lahey said. “It took me a while to get going, but I think in the second set I geared in a little bit and started to play a little bit better.”

The Waves had to come back the following day and take on No. 8 UCLA in Los Angeles, where they fell 4–3, as the Bruins won the doubles point and three of the first four singles courts.

Despite the UCLA loss, Lahey’s two singles victories during the week moved her back into the No. 1 individual ranking in the nation, while Iamachkine moved up to No. 33. Lahey has only dropped one singles match throughout the 2019–2020 collegiate season. 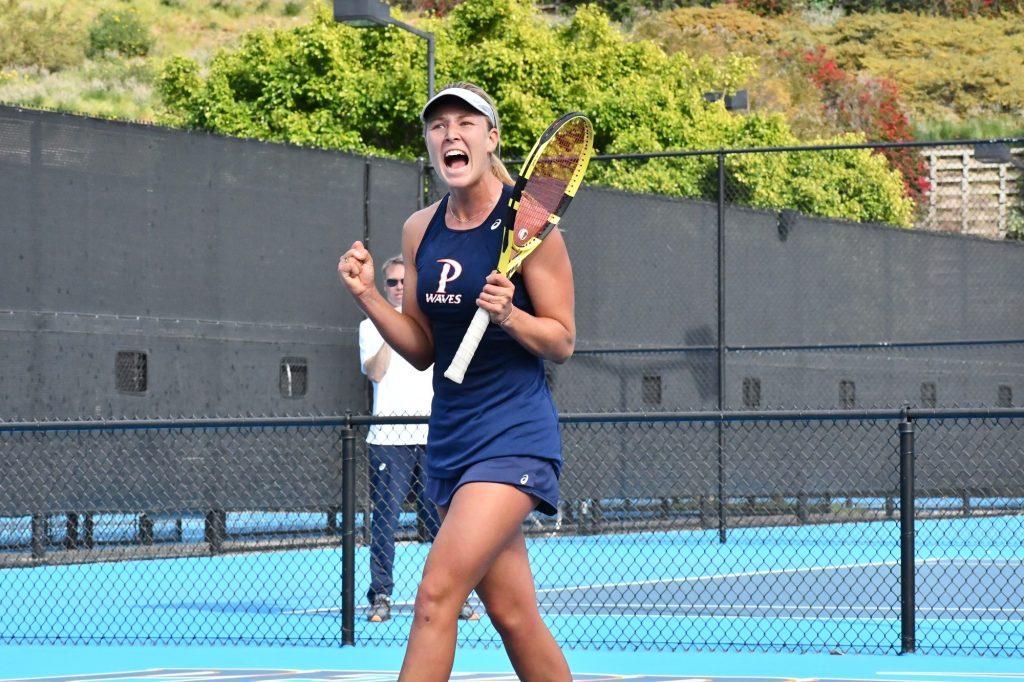 Senior Ashley Lahey reacts to her singles victory on court one at the Ralphs-Straus Tennis Center. Lahey is the top-ranked singles player in the country.

Next up for the Waves, now ranked No. 16 in the nation, are home matches Friday against No. 50 UC Santa Barbara and Saturday against No. 15 Michigan. 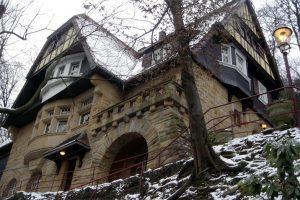 Pepperdine students studying abroad in Heidelberg, Germany, will return to their permanent residences, according to a Pepperdine...
Copyright 2013 Jupiter Premium Magazine Theme
Back to top