In the five years that Pepperdine has co-hosted the esteemed Oracle/ITA Masters tournament, no Wave has ever won a title of any kind.

Lahey said the keys were “play[ing] loose” and “swing[ing] free.”

“There’s so many nerves you have to deal with in a final,” Lahey said. “I just didn’t want to put that kind of pressure on myself.”

Ashley Lahey is the @OracleTennis @ITA_Tennis Masters champion!
She defeats another top 10 opponent (UCLA senior Jada Hart) and starts off her senior year on the right foot, becoming the first @PepperdineWaves athlete ever to win the event. pic.twitter.com/hvvuGZyMgk

“Ashley [Lahey] was unbelievable,” Gash said. “I don’t think there’s a person in the country that could have beaten her today.” 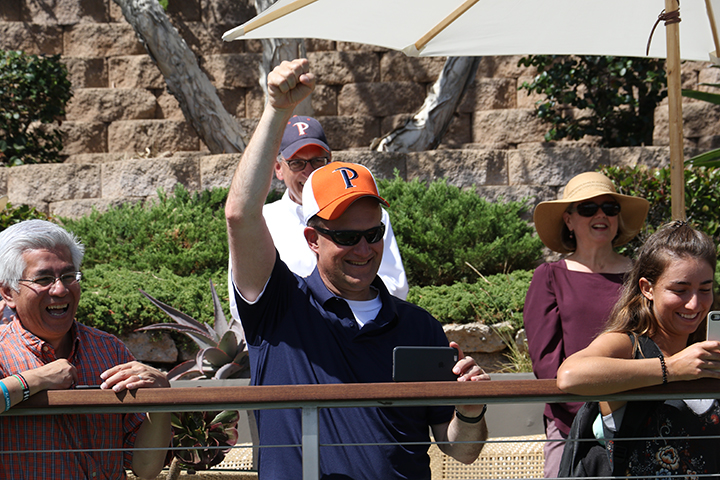 Hart was ranked No. 9 in the country, but Lahey broke four of Hart’s final five service games and held all of her own service games, winning the match in a brisk 62 minutes.

Lahey’s serve was nearly unstoppable and her forehand was solid, but she said the best part of her game was mental.

“My confidence just kept getting going up and up, and [Hart’s] confidence started to go a little bit down,” Lahey said. “Usually, we have really long grind matches together, so it was interesting today to actually pull through that quickly.” 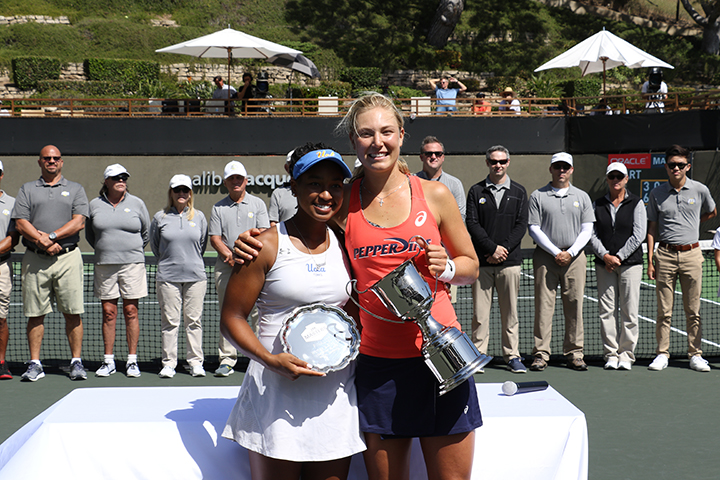 The tournament brought the top players (one man, one woman) from each NCAA Division 1 athletic conference to Malibu. Essentially, Pepperdine Athletics partners with Oracle, the ITA and Malibu Racquet Club to kick off the fall tennis season with a high-caliber meeting of top competition. Since 2018, each player in the tournament also plays in a rare mixed doubles draw.

There were 4 champions, but plenty of wins at the 2019 #OracleITAMasters.

Congratulations to the champions and runners up!@ITA_Tennis I @Oracle pic.twitter.com/g6hFnb7qCZ

As host, Pepperdine received a few automatic entries to the tournament, so fifth-year senior Jessica Failla, the No. 32 women’s player in the country, joined Lahey in the women’s draw, and sophomore Corrado Summaria entered the men’s field. It was the collegiate season-opening tournament for each of the three Waves.

“We were really appreciative of the opportunity that we had with a wild card because of Pepperdine co-hosting the event,” Men’s Tennis Head Coach Adam Schaechterle said. “I thought [Summaria] did a really good job of taking advantage of the opportunity.”

Summaria, who entered the Masters unranked by the ITA, destroyed No. 63 Zdenek Derkas of Fresno State in straight sets Thursday and then upset No. 16 Hady Habib of Texas A&M 7-6, 4-6, 6-3 on Friday at the Ralphs-Straus Tennis Center. 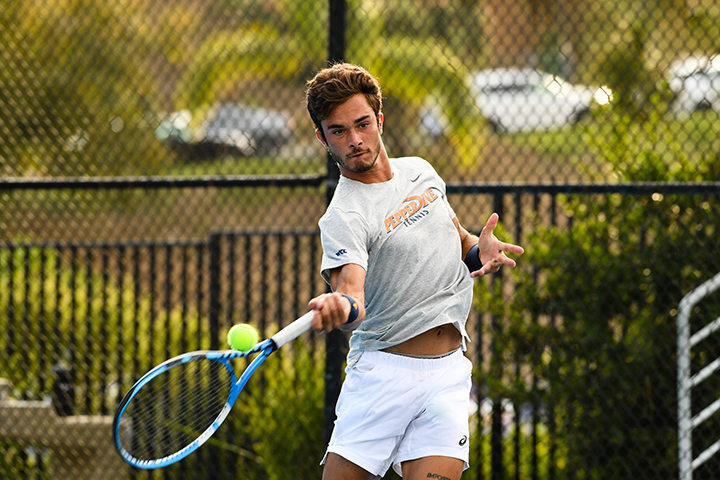 The Italian battled in the quarterfinals Friday afternoon but fell 7-5, 6-3 at the hands of No. 23 Alex Brown of Illinois.

“[Summaria] has been much more consistent this fall in his practice habits, and his work day-to-day has been really consistent,” Schaechterle said. “His match play reflected that.”

Summaria and three Pepperdine Men’s Tennis teammates will travel to Tulsa, Oklahoma, for the ITA All-American Championships, which begins Oct. 5 with qualifying rounds. It will be the season opener for returning No. 1 singles player and senior Adrian Oetzbach. Additionally, three Waves, including two freshmen, will travel to the Aztec Fall Invitational.

“We have four or five players that are playing very well,” Schaechterle said. “They all take confidence from [Summaria’s] performance, beating one of the top players in the [Southeastern Conference] in the second round.”

Like Summaria, Failla cruised through her Thursday first round match at the Oracle/ITA Masters, crushing Liberty’s Kalani Soli 6-1, 6-1 at Pepperdine.

In the second round, Failla met Georgia sophomore Katarina Jokic, the No. 1 ranked player in the nation. Though Failla held close at the outset, she fell 6-3, 6-2.

“We were actually excited that she was going to get to play [Jokic],” Women’s Tennis Head Coach Per Nilsson said. “We both thought after the match that [Failla] played a little timid; she needed to go after it a little bit, and that was the difference in the match.” 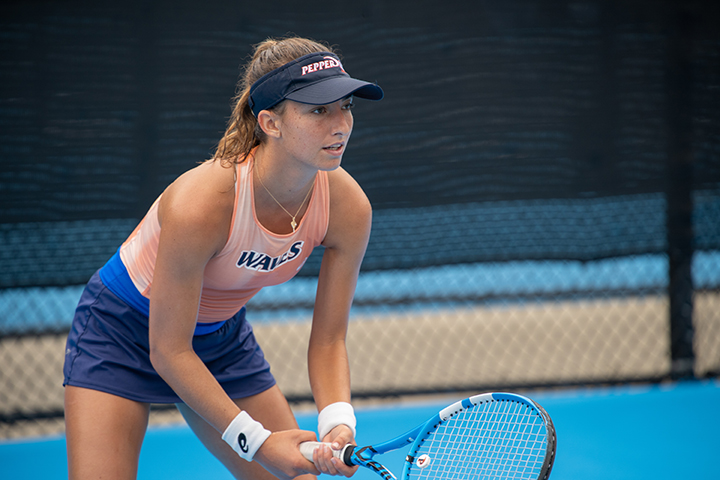 Despite the loss, Nilsson said he is excited for the remainder of the season for both Failla and Lahey in their final year in the blue and orange.

“This is the first time in the fall that [Lahey and Failla have] come in healthy, and that’s a big change from the past,” Nilsson said. “We’re able to get off to a good start training, playing some good matches, and I think that’s going to be a big difference.”

Lahey, who was the 2018 NCAA Championships Singles runner-up as a sophomore, certainly started off her season on the right foot, as she even avenged her 2019 NCAA Round of 32 loss in this tournament.

Lahey defeated No. 4 Alexa Graham of North Carolina, who defeated Lahey in May in Orlando and earlier Friday in mixed doubles, in straight sets in the quarterfinals.

“[Graham] is an amazing player,” Lahey said. “To play her again, I knew I had to be ready. I think I prepared pretty well for that match. When I got out there, I just fought for every point.” 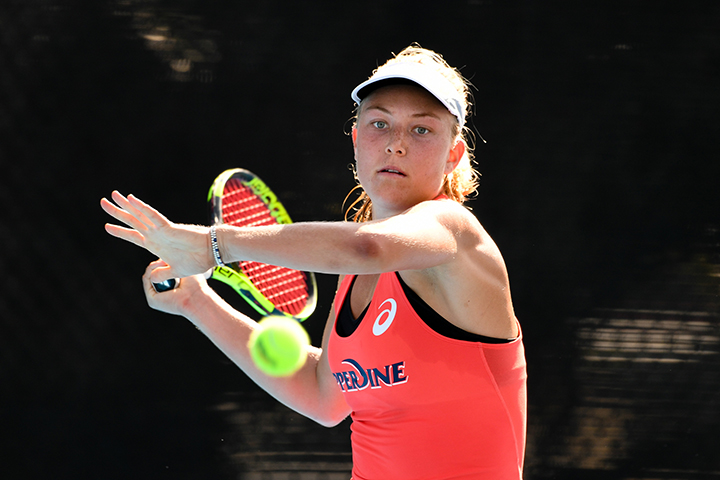 She was the first Wave to leave with the big trophy.

At 5 feet 11 inches, Lahey is an intimidating figure on the court, but post-match, the 19-year-old senior was all smiles. 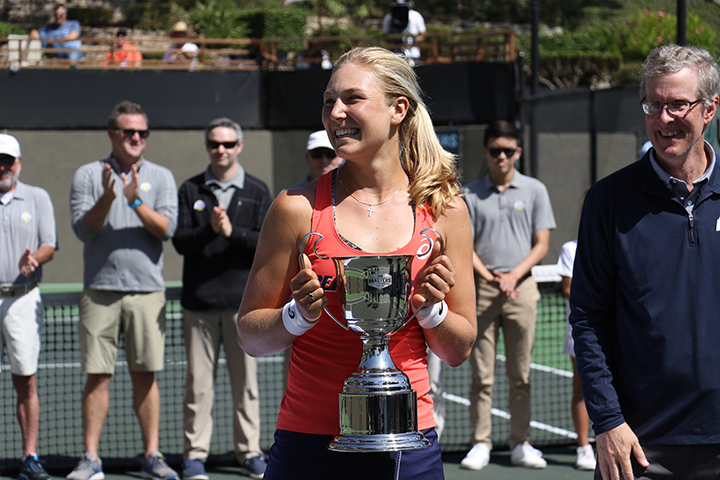