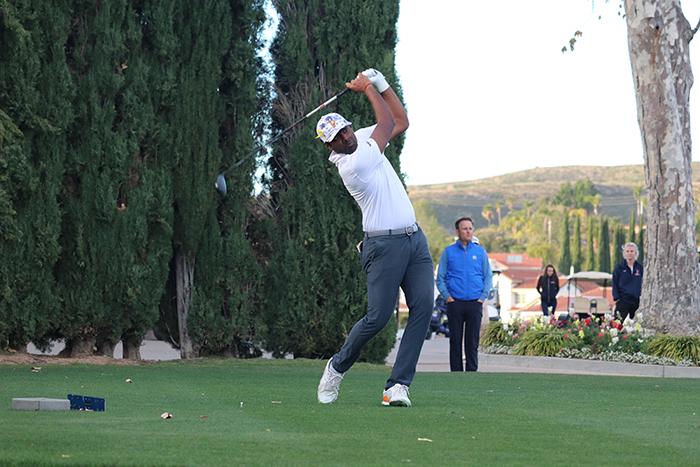 Pepperdine senior Sahith Theegala tees off at the Southwestern Invitational at North Ranch Country Club in January. Theegala won the event individually and the Waves won the event as a team, their first of two team victories in the spring season thus far. PGM File Photo

For the first time in program history, Men’s Golf holds the No. 1 national ranking in both Golfstat and Golfweek/Bushnell polls. The Waves are also No. 2 in the Golfweek/Sagarin computer ranking poll.

Pepperdine won the first two tournaments of the spring season back to back — the Southwestern Invitational and the Amer Ari Invitational — for the second time in school history and the first time since 1996. The Waves finished second overall at The Prestige on Feb. 19 and tied for fifth place with University of California, Los Angeles, at nine over in the Southern Highlands Collegiate.

“It’s pretty insane being ranked No. 1,” redshirt senior Sahith Theegala said. “I never thought that we would get to this. When I committed, we were ranked, like, 100. Obviously, we had high expectations for this year because we knew all the guys are pretty good coming, but to be No. 1 is really sweet.”

The Waves were one of the seven top-10 teams going into the Southern Highlands Collegiate in Nevada this past week, winning head to head against No. 2 Oklahoma, No. 3 Georgia Tech, No. 7 Duke and No. 10 SMU.

Theegala was a key player of the tournament — his tie for fourth place moved Pepperdine up the leaderboard. He tied a school record with his 36th career top-20 finish; he had a total of 15 birdies, one off the tournament high, and accomplished his 19th career top-10 finish.

Theegala said as a fifth-year senior athlete, he leads not only in tournaments but by inspiring the team to take risks regardless of expectations.

“A big thing is not worrying about the physical game but if you’re mentally strong,” Theegala said. “You know, it’s golf. We’ve already reached this level, so just stick though it … and the good strides are going to come, and when they do come, you can’t hold yourself back. I tell the guys it’s not being afraid to hit bad shots, but not afraid to hit good shots too.”

Theegala extended his college career record with his 72nd below-par round at The Prestige on Feb. 19, leading the team to second with his sixth-place finish but not quite clinching first.

“We were trying to stick to our game plan, and we just didn’t play that well,” Theegala said. “We were still going to scrap out a second place in a really strong field, and it kept us as No. 1.”

At The Prestige, junior transfer Joey Vrzich also tied for sixth place with a 5-under 208. Vrzich said he had a positive outlook going into the tournament, especially after coming off two wins.

“I loved the course, so my expectations were pretty high coming into it,” Vrzich said. “I started off the first day with the lead and just became stagnant for the rest of the tourney. I was fighting a little injury … but again found a way to do what I could to help the team.”

Vrzich spent his first two seasons playing collegiate golf at the University of Nevado-Reno, playing in all 22 of Nevada’s tournaments over the course of two years. He was named the 2019 All-Mountain West Conference team as a sophomore and ranked No. 163 by Golfweek/Sagarin after his sophomore season. He is currently ranked No. 104.

Vrzich said he chose Pepperdine to continue to pursue golf because of the team’s competitive drive.

“I happened to have some good teams contact me, and me and my family thought Pepperdine would be the best fit,” Vrzich said. “We [the team] are all pretty hard on ourselves and know exactly what we need to do to get the job done. So just executing is the biggest part.”

Vrzich brought that competitive drive to both the Southwestern Invitational and Amer Ari Invitational. He finished the Southwestern final round in a tie for sixth place with an eagle and four birdies and contributed to the Waves’ overall win at Amer Ari with two birdies on his final three holes.

“Winning the home event was a good way to start the season, especially being at home,” Vrzich said. “The Amer Ari win was a special one, especially to win it with how we did. Being so far back to start [the final] day and just making a last three-hole charge to win was special and proved to us how good we can be.”

Freshman William Mouw accomplished one of the greatest finishes in the program’s history, jumping from 17th to first place in the final round with a 13-under 203, leading the Waves to victory.

While he has high hopes for the season, Theegala said he wants the team to remain consistent for the remainder of the season and to continue competitively both in practice and tournaments.

“We cannot get ahead of ourselves because a lot of people have a target on our backs,” Theegala said. “So to not let these other people get in our heads and to know that if we can beat each other in practice, we can beat anyone else in the country. Keeping our expectations behind us is going to be huge for the next few events.”

Vrzich said he has high hopes as well for the season, both individually focusing on his game as much as winning the WCC Championship.

“We are excited to see what we can accomplish with our team that we have,” Vrzich said. “I think this team can do things that we don’t even know yet. And for future seasons, we just got to see what happens — just try to go out and have the best time.”

The Waves compete in the 3M Augusta Invitational in Georgia on Apr. 4 and Apr. 5.