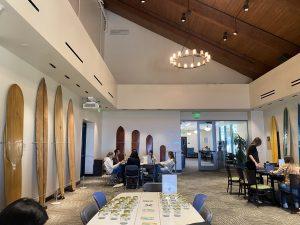 Students attend RISE and Reflect event Nov. 4, in the Surfboard Room. Pepperdine’s Resilience Informed Skills Education Program intended for the event to be a safe space for students to remember the dual tragedies of the Borderline Shooting and Woolsey Fire said Sergio Gallardo Palma, program specialist at RISE. Photo by Tanya Yarian

Four years ago, the back-to-back tragedies of the Borderline shooting and Woolsey Fire devastated both Pepperdine and the surrounding communities Nov. 7 through Nov. 10.

Stacey Lee Gobir, assistant director of RISE, said the community holds onto the memories of both Woolsey and Borderline, and RISE wants to support those who are grieving or healing.

“I think it’s so important for us to continue to hold intentional space to grieve, to mourn, to acknowledge the pain and to give students, faculty and staff resources to be able to process through anniversary trauma, which we know is a real thing and continue to acknowledge just how impactful those two experiences were,” Lee Gobir said.

The tragedy occurred on college night in 2018, where Pepperdine students learned to line dance at Borderline Bar and Grill. Pepperdine students scattered during the tragedy and did not reunite until hours later, wrote Allison Lee, former Graphic executive editor and alumna (’20) in a recount of events for the Graphic.

In her first semester at Pepperdine, Housley was an active member of the choir and a fantastic listener, according to past Graphic reporting. Following the tragedy, Housley’s family started the Alaina’s Voice Foundation to usher in change through the arts and mental health programs.

“Alaina was a person who jumped right into things,” her suitemates wrote in a 2018 tribute published in the Graphic. “The first day of NSO she marched into DeBell, Coffee Bean mocha in hand, ready to take on the year. We all knew from the moment we met her that this was a girl with a big heart and a fast mouth.”

On Nov. 9, the Woolsey fire approached Malibu. By 7 a.m., Malibu City issued an evacuation order, and residents had to make the choice whether to flee or stay and defend their homes, according to past Graphic reporting.

Students sheltered-in-place on campus in both Payson Library and Firestone Fieldhouse, according to past Graphic reporting. From there, students watched the flames descend the hillside toward Pepperdine reaching the border of campus.

Officers were posted outside campus, and stayed until Nov. 16, 2018, to keep campus safe.

Both Lee Gobir and Palma were at Pepperdine when these tragedies struck. Palma was a student and Lee Gobir was a resident director for HRL at the time. Lee Gobir was part of the residential emergency response team and helped with the collective care of students, she said.

“Knowing what I know, having been given the resources that Pepperdine generously gave to me and to the students that I oversaw at that time, I can say this is anniversary trauma,” Lee Gobir said. “My body is just remembering what happened four years ago and that allows me to normalize it, and I know that I’m not alone.”

The class of 2022, who both events directly impacted, graduated, but Palma and Lee Gobir said there is value in holding spaces for reflection and re-centering because these events impacted the whole community.

“This is just not something that we want to stop talking about or ever forget about,” Lee Gobir said. “We want to continue to preserve Alaina’s memory, and also to remember these things that happened and to aid healing in that too.”

Lee Gobir said she hopes events like RISE and Reflect will welcome the emotions of the community, and RISE will connect the community with resources.