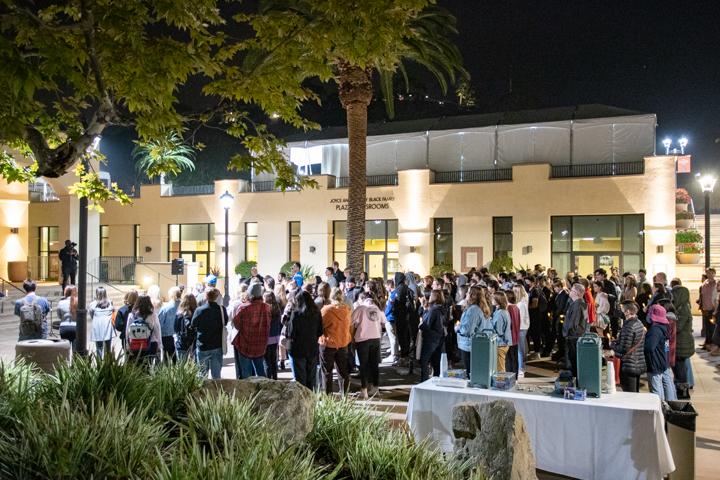 Nov. 7-10 marked the third anniversary of the Borderline shooting and Woolsey Fire. This year, Pepperdine remembered the back-to-back tragedies and honored the victims of Borderline shooting with a candlelight vigil, Hope Forward Day and a time of reflection in Stauffer Chapel.

“We gather here to be a community; we gather here to be together and to find comfort in our faith,” University Chaplain Sara Barton said at the candlelight vigil. “My memories of those days of Nov. 7 and 8 of 2018 are that — that’s what got us through such hard things: We were together.”

Pepperdine’s senior class of 2022 is the only remaining group of Seaver students on campus who were present for the shooting and fire.

Senior Hattie Pace is a survivor of the Borderline shooting, and she said this is her first year being on campus for an anniversary. Pace was abroad her sophomore year and at home due to COVID-19 her junior year.

Pace attended Borderline the night of the shooting with a few of her close friends and said she has been healing with her peers ever since the tragedy.

Another important part of the remembrance events was educating the three underclasses about what happened at Pepperdine three years ago. Pace said while she was grieving this year, she also wanted to inform the other classes about how these two events shaped their lives.

In addition, the underclass students now have the responsibility to remember these events alongside the Malibu community, even after the senior class graduates, Pace said.

“You’ve come into a community where we’ve endured things, and so we want you, if you’re new, to know what took place just a short time ago, and so we ask you to stand in solidarity and in unity with us,” Barton said.

Pace and Barton both said they got through the tragedies three years ago by being together in community with other Pepperdine members.

“I am just praying daily that that culture is preserved in our student body,” Pace said. “When something hard happens, we rally around the people and love and support them — because that’s that’s why I’m still here. I just felt really loved and supported.”

While Pace said the Borderline shooting will shape her life forever, she also recognized it brought her closer to the Pepperdine community and to the people with whom she experienced the night.

“The tragedy is horrible, but it brought so many people together in love and compassion,” Pace said. “It brought hope to people that we can be better than how we have been.”

Nov. 7, Pepperdine hosted a candlelight vigil on Joslyn Plaza to remember the events that shaped the Pepperdine community. Barton spoke at the ceremony, alongside Alaina Housley’s parents.

Pace said that after the Borderline shooting and Woolsey Fire, Pepperdine hosted a candlelight vigil, so this was a “full-circle event.”

“A lot of our students were there and have that trauma to carry now,” Pace said. “I’m happy that’s mirroring that experience.”

Alaina Housley’s parents, Arik and Hannah, attended the vigil and spoke about how the Pepperdine community has supported them in the past year.

“We’ve been surrounded by so much love,” Arik Housley said. “Knowing that together really helps us all heal.”

Arik Housley encouraged students at the vigil to connect with one another and not forget about how far a simple act of kindness can go.

The Housleys started the Alaina’s Voice Foundation shortly after their daughter’s death with a similar message — to inspire hope and kindness in communities through education, music and mental health initiatives.

On Nov. 8, Pepperdine hosted Hope Forward Day to honor Alaina Housley and provide resources to students who wanted to speak about the anniversary.

Alaina’s Voice had a table at the event, giving away Alaina’s Voice bracelets and the Graphic’s 2019 coverage of the shooting and the fire.

Time of Reflection in Stauffer Chapel

Pepperdine also hosted a time of reflection in Stauffer Chapel on Nov. 8, where attendees could write a note of encouragement or a prayer and pin it on a board at the front of the Chapel. Pepperdine also invited attendees to use this time to reflect on the tragedies in silence.

Family members or representatives from each of the 12 Borderline victims were present to each read the victim’s names, followed by a moment of silence. The ceremony took place at Healing Garden at Conejo State Park.