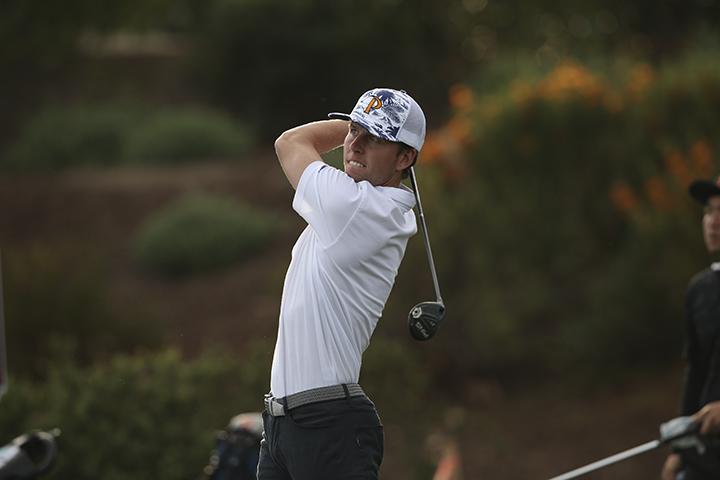 Fifth-year Joshua McCarthy swings his PING driver during a 2019 tournament. McCarthy snagged his first career win at The Pasadera Collegiate Invitational in Monterey, CA, on Oct. 5–6.

After a bitter end to the 2019–2020 season and a flash of potential at the U.S. Amateur Tournament, Pepperdine Men’s Golf started its preseason with a statement win against familiar West Coast Conference foes.

Forty-one players participated at The Club at Pasadera, a narrow and hilly course that isn’t as long as Pepperdine’s regular practice grounds of Sherwood Country Club. Of the 41 players, every one of the top five finishers were Waves. Pepperdine also accounted for seven of the top 10 scores.

Every member of the Waves’ 10-man roster finished in the top 17 with a score of 2 under or better. As a team, the Waves were 46 under — 28 strokes ahead of second-place Loyola Marymount.

“In the past, we were always building to get to that number-one ranking,” fifth-year Joshua McCarthy said. “Now that we’re there, we’re being viewed differently, like playing in huge tournaments and getting on the Golf Channel. We’re starting to enjoy the benefits of our labor.”

LMU, Saint Mary’s, University of San Diego and BYU joined Pepperdine at the Pasadera Collegiate Invitational. All 10 Pepperdine golfers, who are all on campus or living in the Malibu area, qualified for the event. For conference tournaments like Pasadera, each team has a five-man lineup whose scores represent the school, while the other players who qualify and aren’t in Pepperdine’s lineup play as individuals.

Head Coach Michael Beard, who constantly shuffles his lineup, went with McCarthy, sophomore William Mouw, fifth-year senior Clay Feagler, junior Joe Highsmith and freshman Caden Fioroni to start. Out of the quintet, it was McCarthy who distanced himself in the final round of 18 holes and finished 14 under, four stokes in front of the next golfer not in a Pepperdine uniform.

“I got off to a really good start,” McCarthy said. “I was putting the best I’ve ever putted. I was making everything I was looking at, and it was one of those freaky days where I was really clicking for the longest time.”

Going into the final round, McCarthy was not atop the leaderboards. Menante, who was playing as an individual, was the surprising scorecard breaker. He had a five-stroke advantage to McCarthy after two rounds.

McCarthy faced some adversity in the final 18 but ultimately secured the 14 under score, which tied Menante, who finished prior.

“I definitely hit a rough patch on hole 12,” McCarthy said. “I hit it in a bush and made a triple bogey. After everything was perfect for so long, I was in trouble. I had to compartmentalize that hole and just move on from it. I chipped in for eagle on 17, and it was such a good feeling. It reminded me that it was still my day.”

It was McCarthy’s first college win. His resume across three seasons still makes for a stellar career, as his 71.99 scoring average is fifth in school history and he is 20 rounds away from breaking Beard’s record for most played in school history with 162.

Menante had the hottest first two rounds of anyone in the field. He shot a 62 and a 65 and was 13 under heading into the final day. 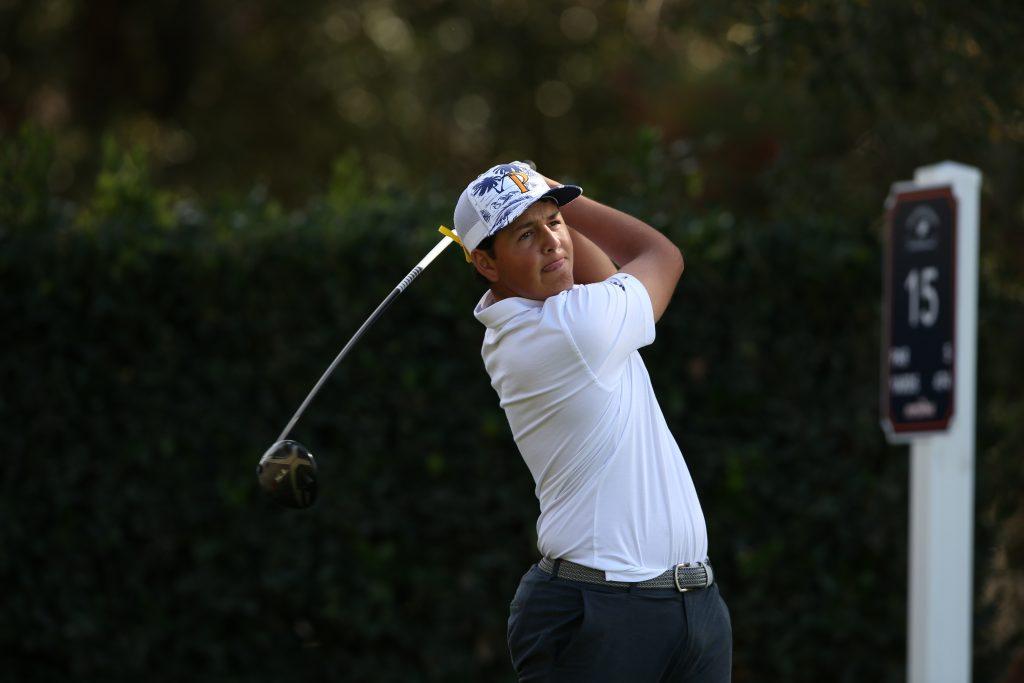 Sophomore Dylan Menante holds his follow through during a tournament in 2019. Menante led all five individual Pepperdine Waves with a score of 14 under.

“I’m a groove golfer,” Menante said. “After hole four or five in the first round, I started feeling my swing. Before that I was just swinging around not in rhythm, but after sinking a 20-footer on 5, I knew it was gonna be a good tournament. When I start making putts, it’s over. Once I make one, I know I can make 10 more good ones.”

Menante led the scores of the Waves playing as individuals. The storyline from the tournament was not just Pepperdine’s top-5 finishes but the depth of the team from top to bottom.

If Pepperdine’s individual players made up their own separate team, they would have finished at 39 under as a group – just seven strokes behind the actual lineup’s 46. After the first two rounds, the apparent B-team had a two shot lead, which Vrzich and Menante spearheaded.

“The team is as nice as we thought,” Menante said. “To have that depth and carry-over from last year is essential. We’ve read a lot this offseason saying we’re underdogs because we lost Sahith [Theegala] and have a number one spot to fill. This shows we can still be dominant.”

The team-wide performance shows that every week in practice is a competition. When Theegala was on the team, the rest of the roster was competing for four spots. Now that he’s on the PGA Tour, all five spots in the lineup are up for grabs.

McCarthy said Coach Beard plays the hot hand and never starts the same group back to back.

“You can never stop working on your game,” McCarthy said. “Everyone is fighting for a spot in the lineup, and it changes so much because this sport is all about the ups and downs. There are weeks you play well and ones you definitely don’t.”

McCarthy said the team chemistry is in a better spot than years prior.

“This year is special,” McCarthy said. “The night before the tournament, almost the entire team was hitting balls at the Westlake driving range at 10 o’clock at night. The whole team is bought in, and little things like that can be overlooked if you only focus on results. For the team, it’s those moments that are gonna propel success.”

Pepperdine will travel to Lompoc, CA, to play in the La Purisima College Invite on Oct. 18. 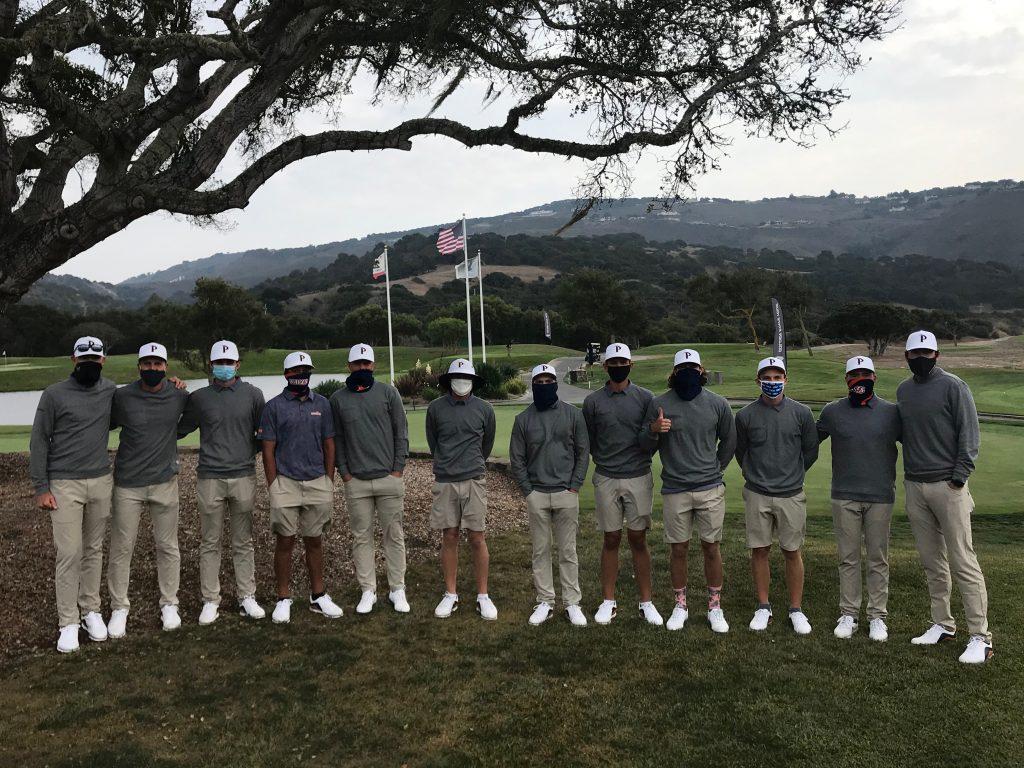 The 2020–2021 Pepperdine Golf Team poses for a group photo after the Pasadera Collegiate Invitational on Oct. 6. The team was tested for COVID-19 multiple times per month and wore masks before and after tournament play. 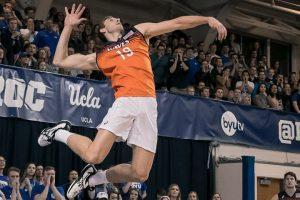 Outside hitter Dave Wieczorek bows his arm back to slam down a jump serve during a 2019 volleyball match. After graduating...
Copyright 2013 Jupiter Premium Magazine Theme
Back to top