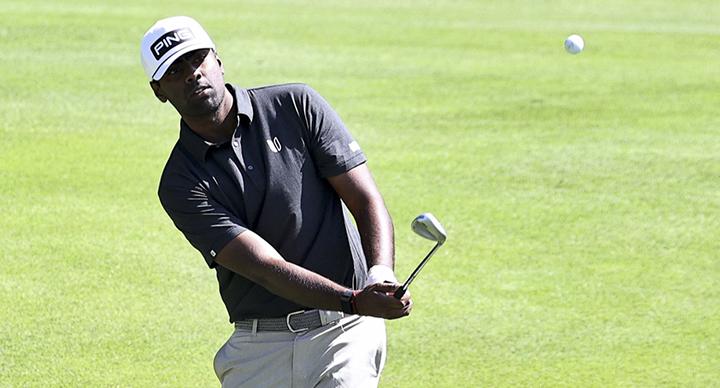 Pepperdine alumnus Sahith Theegala hits a wedge shot during a practice round for the Safeway Open in Napa, CA. The Safeway Open was Theegala’s first top-15 finish as a professional.

Sahith Theegala accepted the Nicklaus Award over a Zoom call June 7, in his hometown of Chino Hills, CA. This rounded out a clean sweep of all three national player of the year honors for men’s college golf: the Fred Haskins Award, Ben Hogan Award and the Nicklaus.

Theegala is the fifth player all-time to receive the three awards in the same season. His name being etched into NCAA history less than three months after the West Coast Conference canceled spring sports outright, leaving the dreams of both Pepperdine’s only National Player of the Year and the No. 1 team in the country unfulfilled.

“It’s almost funny how many people ask me about it,” Theegala said. “In these tournaments I’ve been playing in, I still have Pepperdine head covers on and my yardage book has the logo on it. People ask me how the season was, and I tell them it was great, but we had a theme that we were building on for a while and all of a sudden, it ended. It definitely still hurts.”

While Theegala will never compete in a Pepperdine polo again, the fast start to his PGA career shows he’s not done with earning hardware.

A learning curve accompanied Theegala at his first three tournaments as an official pro. At the Travelers Championship and Rocket Mortgage Classic, he was two strokes shy of making the cut. Two weeks later the 3M Open saw Theegala miss the cut by four.

Theegala said while nerves were a factor in his performance, he knows a large part was the competition in the talented group of players around him.

“I was nervous, but it wasn’t a scared nervous,” Theegala said. “I’m playing with guys I’ve watched my whole life on TV, and then all of a sudden I’m there against them. All of those guys were the best when they were in college too, and now they’re all in one place.”

Theegala said there was one day in particular when he had to pause and remember that he was a player and not a fan.

“I’ll never forget the Travelers, my first tournament,” Theegala said. “The field was so strong. I saw [Jordan] Spieth, Rory McIlroy and Dustin Johnson. I was thinking, ‘Are you kidding me? These are the guys I have to compete against now?’ That was huge, and the next week I was hitting drivers next to Bryson [DeChambeau] at Rocket Mortgage in Detroit. The guy looks like a linebacker and hit drivers for an hour and a half.”

Theegala’s fourth tournament was the Barracuda Championship in Truckee, CA., where he made it to match play and secured a top-50 finish.

Five weeks later Theegala qualified for the Safeway Open, where he shot under par all four days of the tournament and finished tied for 14th. Theegala bogeyed on just five of the 72 holes.

After improving his score on the second and third day, Theegala said he likes to get to know the golf course as the tournament progresses.

“The more times I see the golf course during tournament conditions, the more comfortable I get,” Theegala said. “It can sometimes be hard with fatigue and you have to preserve your physical and mental energy. Luckily, I’ve always loved doing that. The course gets harder with the greens getting a little bit firmer with harder pin placements and I like the challenge.”

Theegala said it’s surreal to get paid for something he’s trained for his whole life.

“It’s a joke,” Theegala said, laughing. “You can’t think about it when you’re playing. It definitely doesn’t cross my mind at all until just before the tournament or after it’s done. During the tournament it still feels like college, playing it shot by shot.”

Theegala said despite the payout, he hasn’t thought about what his first big purchase will be.

“I haven’t made enough money to think about spending,” Theegala said. “The way I see it right now is most of my expenses are taken care of, which is great. It’s so surreal to think that I have an opportunity to do what I love for a good part of my life and earn off of it. No big shopping sprees yet — I haven’t even looked for a new car.”

Theegala is still waiting for sponsorship opportunities as well. He swings the same PING clubs he did in college, wears LINKSOUL polos just like the Pepperdine team and laces up FootJoy shoes as he walks courses ranging from Southern California to the TPC Highlands in Connecticut, where he played the Travelers Cup.

What comes next for Theegala is a difficult process. For younger or lesser-known players, invitations to PGA Tour events aren’t delivered to their mailboxes. A lot of the communication between the PGA and its athletes is by the golfers themselves as Theegala or his agency contacts tournament directors to see if an upcoming tournament has open spots.

Theegala said it often pays off for players. As tournament directors are incentivized when dealing with amateur stars.

“The tournaments are typically great at giving younger guys a shot — even the ones that are still in college because if they’re the next big thing, they get to say that they played in their tournament first,” Theegala said.

Even with a top-15 finish, Theegala has a ways to go before he’s competing in an elite tournament like the Masters. The 23-year-old will have to win an event or climb into the Top 50 Official World Golf Rankings.

Theegala’s next competition is a Monday qualifier, or a stroke-play tournament held days before the professional tournament where the top finishers earn a spot in the field. On Sept. 28, he’ll be in Canton, Miss. for the Sanderson Farms Championship Pre-Qualifier. He also plans on attending the Shriners Hospital Section Qualifier in Boulder City, Colo. to earn a spot in the official event in Las Vegas. All Monday qualifier contestants have to pay for all their expenses.

While it’s typically a large and talented field competing in the Monday qualifiers, Theegala said he likes his chances.

“They’re both going to be big groups, anywhere from 70 to 90,” Theegala said. “There will be two to four spots available for the tournament, so you have to play ridiculous. You’re not getting into the tournament without shooting a 62 or 63. I’m excited for it, and think I have a legitimate chance out there.”