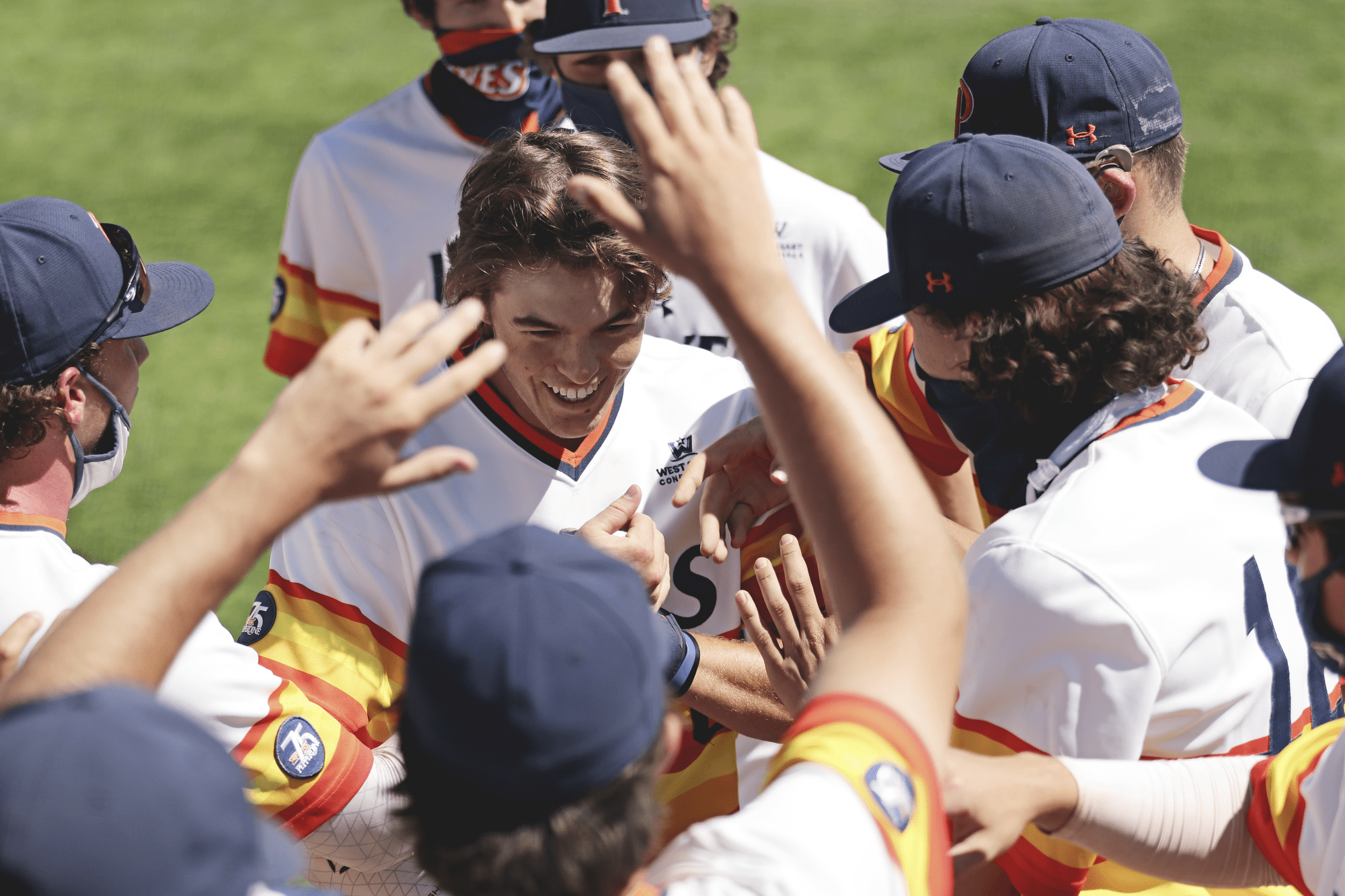 Pepperdine Baseball’s rollercoaster season reached an upswing, as the Waves recorded four wins in five games between March 23 and March 28.

Following a two-game sweep of Grand Canyon University in Phoenix on March 23 and 24, by scores of 14-5 and 4-3, the Waves turned their attention to their first West Coast Conference series of the season at Eddy D. Field Stadium.

The pitching staff helped deliver victories Friday and Saturday, 4-0 and 7-2, but the Waves lacked a timely hit in a 3-2 Sunday loss. The series victory against the visiting Saint Mary’s Gaels moved the Waves to 11-11 on the season and 4-2 in conference play.

“Every weekend we’re just trying to play a little better than we did last and that definitely happened this weekend,” redshirt freshman pitcher Trevor Hinkel said.

A pair of young pitchers delivered Pepperdine a 4-0 shutout win in a pitchers duel in the series opener in Malibu.

Hinkel, who surprisingly became the Waves’ ace this season, tossed six plus innings of shutout ball. Hinkel scattered six hits and four walks across the six innings, but worked his way out of multiple jams.

“Our coaches had a pretty good game plan as far as going to pitchouts and showing the other team that we had a plan to attack their baserunners, as well as the hitters,” Hinkel said. “The plan worked perfectly. We kept the baserunners off balance so they weren’t really able to get much motion going around the bases.”

Hinkel battled with Saint Mary’s starter Carlos Lomeli through five innings, but the Waves broke the scoreless stalemate in the bottom half of the sixth.

Alexiades credited the pitchers for protecting the small lead.

“It really boosts our confidence a lot,” Alexiades said. “The pitchers did fantastic this whole weekend, even in our midweek games as well. That really puts a lot of pressure off us hitters.”

Freshman pitcher Brandon Llewellyn entered for Hinkel on the mound and only allowed one baserunner in three innings. Llewellyn completed a rare nine-out save in his seventh appearance of the season.

The shutout was the Waves’ second of the season. Hinkel said the weekend served as a confidence boost for the entire staff.

“It was definitely very encouraging, especially because we had a couple guys who came out of the ‘pen in some tight situations with runners on base just to get one or two outs,” Hinkel said. “They got their job done pretty quickly and saved a couple of runs.”

On another sunny and breezy afternoon, the Waves bats consistently put pressure on the Gaels’ pitchers in a 7-2 victory.

Senior first baseman Justin Lutes skied a go-ahead home run to right field in the third inning to put Pepperdine ahead 2-1, and the Waves never looked back.

Alexiades, who moved up to the number two spot in the batting order on March 12, and has hit there in each game since, expressed confidence in the entire lineup. Alexiades contributed a sacrifice fly in the game and his batting average remains above .380 in his 17 games this season.

“It’s a lot easier for me to hit with [junior shortstop] Wyatt [Young] in front of me and then guys like Lutes and [sophomore utility man] Ryan Johnson behind me,” Alexiades said. “It takes a lot of pressure off me, because I know if I don’t get the job done, one of those guys will. Overall, every guy in our lineup has been producing, and it’s really encouraging for us as a whole.”

“It’s a little different than coming in and just closing one inning, to be able to go in there and do it for three,” Head Coach Rick Hirtensteiner said. “[Llewellyn and Diamond] have been tremendous for us, and it takes a lot of pressure off of the bullpen and it leaves you with a pretty good staff to pitch on Sunday.”

Pepperdine struck first on a toasty Sunday but could not get a key late-inning hit in a 3-2 loss.

Johnson scored from second on a failed back-pick attempt when a throw from Gaels’ catcher JC Santini struck a diving Waves third baseman Aharon Modlin, giving the Waves a 1-0 lead in the second inning.

Pepperdine junior starting pitcher Trevor Kniskern navigated the first three innings unscathed, but the Gaels pulled ahead with a fourth-inning two-out rally. Santini lifted a solo home run over the left field wall near the foul pole, and Blake Mann delivered a two-run single to give the Gaels a 3-1 lead.

Freshman second baseman John Peck smacked a fifth-inning home run to left field, but that would be the final offense the Waves could muster.

The team entered the series leading the WCC in home runs and mashed another long ball per game.

Along with Modlin, Young and Johnson, Peck and fellow freshman Connor Bradshaw have started every game this season for the Waves.

“My freshman year I could not have come close to what they’re doing right now,” Alexiades said. “The maturity that Bradshaw and Peck have is pretty unbelievable. They’ve solidified themselves as everyday starters, and we do the best we can to encourage them, but with their work ethic and preparation, it doesn’t surprise me what they’re doing.”

Hirtensteiner said while the loss stung, it was encouraging to see the pitching and defense play well. The pitchers allowed only five total runs throughout the series against Saint Mary’s.

“We were a little sloppy up in San Francisco when we lost our game,” Hirtensteiner said. “Today we were not sloppy. We just didn’t score enough runs, flat out.”

Waves pitchers had allowed more than six earned runs per game entering the weekend series, but the week offered a strong turnaround.

“It always starts with the pitching,” Hirtensteiner said. “If we can get good starting pitching, it’ll be a good thing for us.”

In a season without a WCC tournament to qualify automatically for the NCAA Baseball Tournament, the overall conference record throughout the season will determine the conference champion. Every WCC game matters, including the third game of a clinched series.

“There’s not as much room for error this year, for sure,” Hirtensteiner said.

The Waves were set to hit the road for eight consecutive games, but COVID-19 protocols forced the postponement of all eight.

Pepperdine and UCLA canceled their March 30 matchup due to COVID-19-related protocols, then the Waves announced a two-week pause of all baseball activities. Their next series following the pause is scheduled for April 16 at home against Gonzaga.