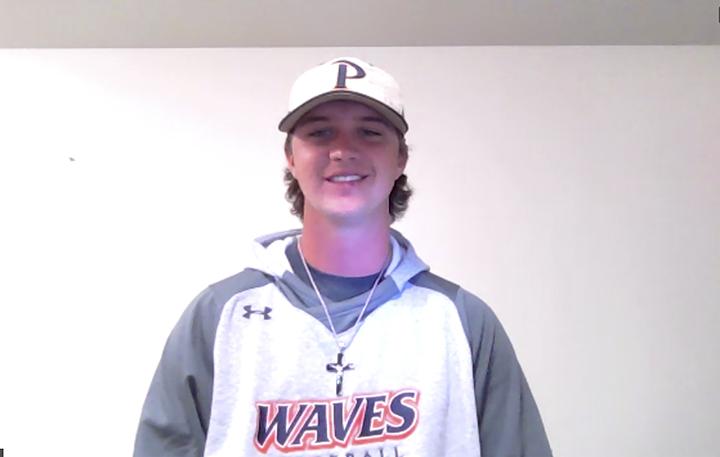 Redshirt freshman Trevor Hinkel smiles during a Zoom call in his Lovernich apartment on campus March 1. Hinkel recovered from elbow surgery to become the Waves’ No. 1 starter. Photo by Ryan Brinkman

After a sparkling career at Chaparral High School in Oceanside, Calif., where he had an 0.79 ERA and 34 strikeouts in 26 2/3 innings pitched during his senior season, Hinkel underwent Tommy John surgery and missed the entirety of last year.

“It was really tough,” Hinkel said. “I didn’t really have any mobility, so it starts off with just basically breaking in your elbow again, teaching it how to move.”

Tommy John surgery is an elbow reconstructive surgery that repairs a torn ulnar collateral ligament by removing part of a tendon from elsewhere in the body and attaching it to the UCL on the inside of the elbow. The surgery is synonymous with baseball pitchers due to the unique strain that the throwing motion puts on the body.

The surgery is named for Tommy John, a former Major League pitcher who was the first to receive the surgery and successfully return to play. Although some pitchers are able to return to their previous levels of performance, it often takes a year or more to recover from the injury.

“I think the biggest obstacles were honestly being in the training room all the time,” Hinkel said. “That was tough for me because I’m always used to being out there.”

Hinkel said going from star player to injured and on the bench initially affected his relationships on the team.

“It was brought to my attention by a couple teammates that I wasn’t being the best teammate,” Hinkel said. “Obviously, in high school, I was out playing every inning and every game. So, coming here injured was something different for me and something I had never experienced, and I didn’t know how to go about it at first.”

While being off the field was a challenging adjustment, Hinkel said he benefitted from a different perspective of helping the team.

“I realized there is so much stuff off the field you can do to make the team better,” Hinkel said. “Whether that’s stealing signs, taking charts, helping other pitchers with what they’re struggling with, picking up teammates, cheering, anything. There’s so many things you can do that actually make a difference in the game.”

To get back on the mound this season, Hinkel completed an intense rehab program, starting with blood flow restriction training to help strengthen muscles with a lower weight. After doing more strength training on his shoulder blades and back to help support the elbow muscles, Hinkel could finally pick up a baseball.

As Hinkel began to build up more length and stamina, COVID-19 threw a wrench into his plans.

“COVID-19 sent us home, so I wasn’t able to do all of my rehab here,” Hinkel said. “I had to figure out how to do it on my own, but I think I ended up better off because I could structure my own program based on how my arm was feeling.”

Although he recovered into pitching shape this winter, Hinkel said he didn’t anticipate having a big role on the team so soon.

“I wasn’t really expecting to start at all until a couple weeks before the season, but once I got the opportunity, for me it was just getting back in the mental state of who I was before and where I’ve always been.”

In two starts, including Opening Day on Feb. 19, Hinkel allowed a total of 4 runs on 6 hits, striking out 9 in 9 1/3 innings. While he still has work to do to raise his pitch count to be fully back to normal, Hinkel is pleased with his progress and happy to be out on the field.

“I’ve been able, for the most part, to hit the spots I’ve been aiming for with all of my pitches,” Hinkel said. “That’s what I’ve been the most confident in.”

Hinkel will likely take the ball Friday, March 5, when the Waves take on No. 8 UCLA at Jackie Robinson Stadium. 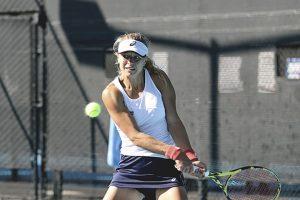