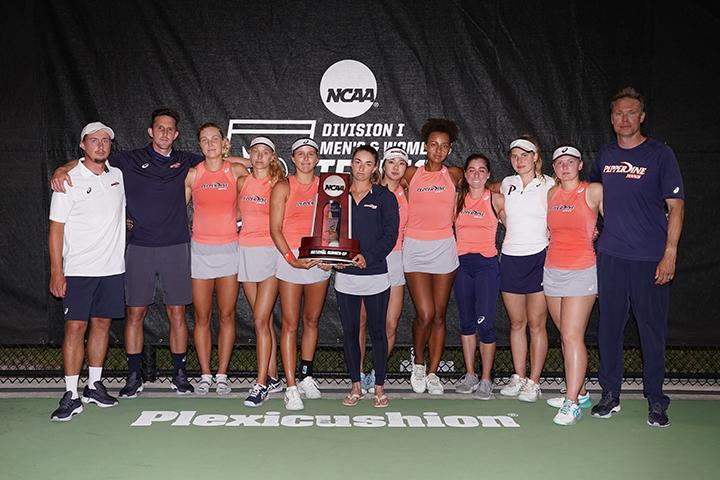 Pepperdine Women’s Tennis poses with their runner-up trophy following the national team championship finals on Saturday, May 22, at the USTA National Campus in Orlando, Florida. The Waves fell 4-3 at the hands of the Texas Longhorns in the final match.

Pepperdine Women’s Tennis completed the best season in program history but came one court short of a national championship.

The No. 5 Waves fell 4-3 against No. 2 Texas in the national title match Saturday, May 22, at the USTA National Campus in Orlando, Fla.

“It’s bittersweet,” Head Coach Per Nilsson said. “This was the most fun week of the whole year for us, and to come up a little short hurts.”

In the 33rd consecutive NCAA Tournament appearance for the program, the Waves reached the national championship match for the first time in program history but just missed the 14th team title in Pepperdine Athletics history.

Graduate student Jessica Failla said the match will be a memory she’d have for the rest of her life.

“Pepperdine is unique in what we have,” Failla said. “It’s unbelievable what we’ve been able to accomplish, and while it’s hard to have that perspective right now, it’s definitely the truth.”

Entering the match, Pepperdine was 5-0 against Texas in the two programs’ history entering the national championship, including a 7-0 drubbing in Malibu in 2020. Texas Head Coach Howard Joffe played tennis at Pepperdine from 1990-1992 and led the Waves to three WCC titles.

This Longhorns team under Joffe had a very different roster — with five freshmen in their singles lineup, including Peyton Stearns — one of the top freshmen in the country playing at the No. 1 position. Texas entered the match with an overall record of 30-1, losing only to No. 1 North Carolina in the ITA Indoor Championships, 4-3.

On a warm and windy evening in Orlando, fifth-year Shiori Fukuda and freshman Taisiya Pachkaleva got the Waves off on the right foot with a win. Fukuda’s play at the net helped the pair to a 6-1 victory on doubles court two.

With a large and loud crown on hand, Texas fought back. Courts one and three went to a tiebreak, and the freshman Longhorn pairs won both, fighting off multiple match points on court one and taking the doubles point.

“We gave ourselves a shot against a really good Texas doubles team,” Nilsson said. “If it was one point in our favor, it could have been a different story tonight — but that’s the greatest thing about college tennis.”

The Waves would not allow the Longhorns the advantage. Senior Ashley Lahey and Failla each won the first sets 6-2 on courts one and two, respectively, after losing their singles matches Friday against North Carolina.

Pepperdine went on to win the first set on courts five and six as well, but Texas’ Charlotte Chavatipon defeated Fukuda on court four — 6-3, 6-2 to give the Longhorns a 2-0 lead in the dual.

Failla, the 21st-ranked singles player in the country, got Pepperdine on the board, crushing Anna Turati 6-2, 6-3. Sophomore Lisa Zaar followed it with a victory of her own, winning a tense tiebreak to beat Kylie Collins 6-3, 7-6.

The teams split courts one and six, with Lahey falling in the third set and freshman Nikki Redelijk winning 6-4, 7-5.

“It’s devastating,” Lahey said after the match. “Personally, I’ve put in a lot of work throughout the semester. I’m sure all the other teams have, but I just was a little disappointed in my performance here this this week — not being able to really dig deep and find what I needed.”

Court three would decide the national title, with two freshmen battling in the third set. Pepperdine’s Pachkaleva, who won the clinching point in the semifinals, took on Texas’ Lulu Sun.

The two underclass players rose to the occasion time and again, each breaking the other’s serve twice and trading games. Pachkaleva fought back from down 5-3 to tie the score 5-5. As the pressure mounted, Sun utilized a formidable forehand and held serve.

In the final game, Sun forced an error on match point and clinched the title for Texas, winning 6-4, 6-7, 7-5. The loss was Pachkaleva’s first singles loss since February 5.

“We felt good with her on the last court, and Lulu on the other side played an amazing match and kept her composure,” Nilsson said. “We struggled to get ahead. We were always catching up. We were really close there in the third set; we needed to get up maybe 3-2 and maybe we could get on a roll, but I was so proud of Taisiya.”

The Road to the Final

The Waves faced a difficult path to the final match. After beating Northern Arizona handily in the first round of the NCAA Tournament, two-time defending national champions Stanford visited Malibu for the second round.

The No. 27 Cardinal took the doubles point and singles court No. 6, but the Waves took courts one through four — including three-set victories by Lahey and Failla — to move on with a 4-2 win.

Pepperdine then flew to central Florida, where the remainder of the team tournament and entire singles and doubles tournaments would take place.

After the destruction of the Wolverines, the upsets began.

Pepperdine took the doubles point and the match from crosstown rivals No. 4 UCLA in a lengthy match May 19.

After five of the six singles courts went to a third set, Fukuda won a dramatic clincher for the Waves at the No. 3 position, giving Pepperdine the 4-3 victory.

The following day, the Waves faced the tall task of No. 1 North Carolina, which had won 48 consecutive team matches, including a victory over the Waves in February.

While the Tar Heels were an elite team with highly-ranked individual players, Nilsson said he knew what that his team could win.

“If anyone’s paid attention the last couple of years, they know that the Waves are one of the premier teams,” Nilsson said in his post-match press conference. “It just looks odd sometimes in an NCAA sport to see Pepperdine’s name up there, maybe. I didn’t think it was that big of an upset.”

Upset or not, the Waves defeated the Tar Heels 4-3, winning the doubles point and singles courts three, four and five. Pachkaleva was the hero, winning 7-6, 6-3 to send the Waves into a frenzy and on to the national title match.

Pepperdine Women’s Tennis appeared in seven NCAA team quarterfinal appearances in the program’s history prior to 2021, between the 37-year head-coaching career of Gualberto Escudero and the first six years of Nilsson’s tenure.

This 2021 team was the first Pepperdine team to get past the quarterfinals, and they did so with a mix of graduate students and underclass talent.

After the 2020 season came to an abrupt end due to the COVID-19 pandemic, Failla pursued a second master’s degree at the Caruso School of Law, while Lahey stayed a fifth-year at Seaver College.

Fukuda, a top-15 singles player during her time at Ohio State, joined the Waves as a transfer, making it a trio of fifth- or sixth-year players.

“It was a really good mix to have,” Lahey said. “Jess and I have been Waves for a long time, and we know what’s expected of us. Shiori adapted fast, and she’s an incredible player and has been playing college tennis for a while, and so she knew how to be a warrior, day in and day out on the court. Everybody just recognized, ‘OK, this is what it means,’ and quickly became that way.”

The Waves were No. 13 in the country when the 2020 season ended, and the team turned their attention to pursuing a national title again in 2020-2021. After a strong showing at the ITA Indoor Championships, the team dealt with challenges due to injury. Lahey and Failla missed matches, and junior Anastasia Iamachkine did not play a single match until the NCAA Tournament due to injury.

With the injuries, the young players in the middle of the lineup stepped up and they were a critical part of the Waves’ run this season.

Zaar finished the season with a 23-2 record in singles and played at the No. 5 singles position and No. 1 doubles position throughout the Waves’ time in Orlando.

Pachkaleva, the true freshman from Moscow, was a consistent force throughout the year, going 25-2 in singles matches and moving up from the No. 5 position to the No. 3 position.

Redelijk was a mainstay in the singles lineup at the No. 5 or 6 position, and redshirt freshman Lexi Ryngler and sophomore Astrid Olsen also made contributions in singles and doubles.

Lahey and Failla have no time to rest or celebrate the team’s accomplishments. Both play in the first round of the singles draw today. Lahey, who is unseeded, will play No. 6 Anna Rogers of North Carolina State, while Failla plays Anna Riedmiller of the University of Denver.

“It’s extremely difficult because they put a lot of miles on their bodies this week, and it’s such a quick turnaround,” Nilsson said. “They’re really tough mentally, Jess and Ash, and I know they’re motivated to recover and get ready for tomorrow.”

Failla and Fukuda open the competition in the doubles draw in the round of 32 on Monday, May 24.

Lahey and Failla, who celebrated their Pepperdine graduation in their Florida hotel May 17, depart after this season, and Fukuda is also out of NCAA eligibility.

Nilsson will enter his eighth season with the other six players on the roster returning, a big runner-up trophy and a hunger to finish the job in 2022.