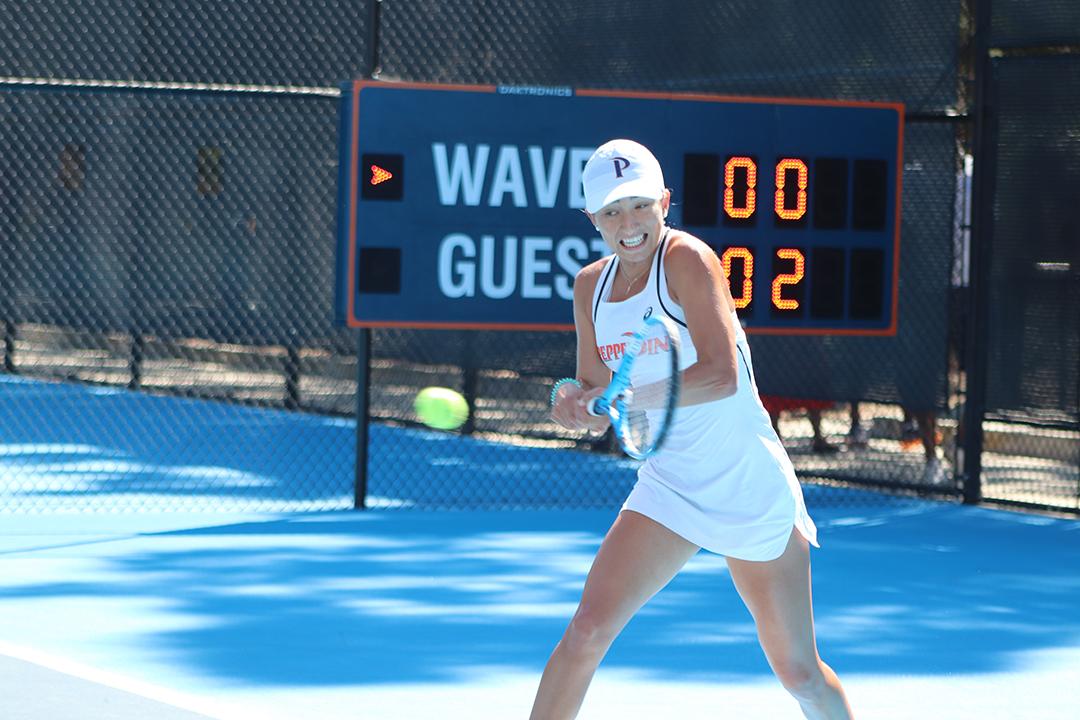 Reinstated tennis player Jessica Failla returns a backhand at the Ralphs-Straus Tennis Center. Failla, who returns to Pepperdine this year to use her sixth season of eligibility, won four tournaments this summer. File photo

When the NCAA canceled spring sports championships in March, it brought an abrupt end to the careers of many senior Pepperdine student-athletes.

Or so they initially thought.

The NCAA then announced that student-athletes would receive an additional season of competition and an extension of their period of eligibility, meaning these graduated seniors could return to play for a fifth year at Pepperdine — or in several of these cases, a sixth year.

“I didn’t think that I would have the opportunity to compete again,” said sixth-year senior Michael Mahony. “When the NCAA allowed us to come back for another year, I found out I had just enough units left to be eligible. I’m so excited to be part of the 2021 team — we’re going to do something special this upcoming spring.”

There are several who graduated from undergraduate school but will take advantage of this additional eligibility and return to play for the Waves.

Graduate student Michael Mahony said he wanted 2020 to be the year where he got the ball rolling for Pepperdine’s Baseball team success — until it was cut short.

While Mahony approached the 2020 season as if it was his last, he said he didn’t want to leave on terms other than his own.

“I just didn’t feel right ending it on the way it ended last year, and I felt like I would regret not coming back and being part of a team and contribute to Pepperdine doing something great,” Mahony said.

Mahony is enrolled in four classes at the Caruso School of Law, making him eligible to compete in the spring.

In preparation for the upcoming season, Mahony said he spent much of his off-season resting his pitching arm.

“I have spent time working on improving my pitches and getting stronger by lifting whenever possible,” Mahony said.

Although the West Coast Conference (WCC) announced they were postponing all fall competitions Aug. 13, Mahony said he has high hopes that he will be able to compete in the spring.

“One of our team’s mottos has always been focusing on controlling the ‘controllables,'” Mahony said. “This upcoming year, there are going to be many uncertainties that’s out of our control. […] We are fully planning to compete in the spring and just focusing on the moment.”

Once the season was canceled, Skjodt wrote that she has taken the opportunity to train as much as possible, following COVID-19 guidelines.

“I have been training back at home in Indianapolis,” Skjodt wrote in an email. “I have been doing at-home workouts and then getting together with some local beach volleyball players to train.”

Skjodt wrote that she’s not worried for the upcoming season, even amid the postponement of the fall season.

“I’m hopeful that things will start to improve shortly,” Skjodt wrote in an email. “If not, everything happens for a reason, and all will work out as it’s supposed to.”

Fifth-year senior Clay Feagler was a part of Pepperdine’s Men’s Golf team in the spring, holding the No. 1 national ranking in both Golfstat and Golfweek/Bushnell polls.

Feagler tied for eighth at the Southwestern Invitational — his last competition before the COVID-19 pandemic stopped all spring seasons from continuing. Feagler said the sudden stop to his season did not deter him from continuing to compete in the summer.

“It’s the same goal we had last year — to win a national championship,” Feagler said. “The goal is to get to NCAA, make a match, play and give it a run, like we were destined to do last year.”

Inspired by former teammate Sahith Theegala, Feagler said he hopes to be a big brother to the first-year players.

“I think this next year for me is just being like a big bro,” Feagler said. “Just being supportive and pushing them.”

The unexpected end to her season did not stop sixth-year senior Jessica Failla from winning the Intercollegiate Tennis Association’s National Summer Championship on Aug. 11.

Failla said she has continued to compete over the summer with COVID-19 modifications, including social distancing from her opponents during matches, changing tennis balls frequently and wiping down the scorecards and benches after every match.

“Those are just some of the changes they’ve implemented that have been super helpful,” Failla said. “It’s helpful, you know, still being able to play and knowing that you’re staying safe.”

Although Failla has been able to compete, she said that her hopes to play in the spring are for reasons beyond her individual game.

“I just really hope that it’s going to work out for [the team],” Failla said. “I feel like I’m so past the point of wanting to do well individually or wanting our team to do well. Honestly, I just want all of us to be together because I know we’re going to work super hard and give our best effort.”

With the uncertainties of spring season, Failla said she believes the new safety procedures will allow her to play for another season.

“To think that we could do all this training and not even have the opportunity to play is always in the back of my mind,” Failla said. “I’m really hoping that I get the chance to play more college tennis.”

When fifth-year senior Trevor Franklin was prompted with the opportunity to continue his education and play baseball, he said he felt it was a circumstance he would regret passing up.

“We had a really good team last year, and [I] felt like we have some unfinished business, so I made the decision to return,” Franklin said.

Following the protocols that the University set forth, Franklin said he has spent a lot of his time training whenever possible.

“We’ve been working out a lot,” Franklin said. “We have a gym off campus that we’ve been going to. We’ve just been trying to do everything we can to just be ready for when they tell us we’re allowed to go back.”

Franklin is a graduate student at the Caruso School of Law, allowing him to continue to compete for another season.

Franklin said as leader on the team, he aspires to not only compete for the national championship but lay the foundation for the next generation of Pepperdine baseball players.

Franklin said he hopes the team’s progress in preparation for spring season will not be deterred by COVID-19 restrictions.

“We have a really good team and we’re all a bunch of really good guys just trying to do good things for Pepperdine,” Franklin said. “[We] try to treat people the right way and win a lot of games.”