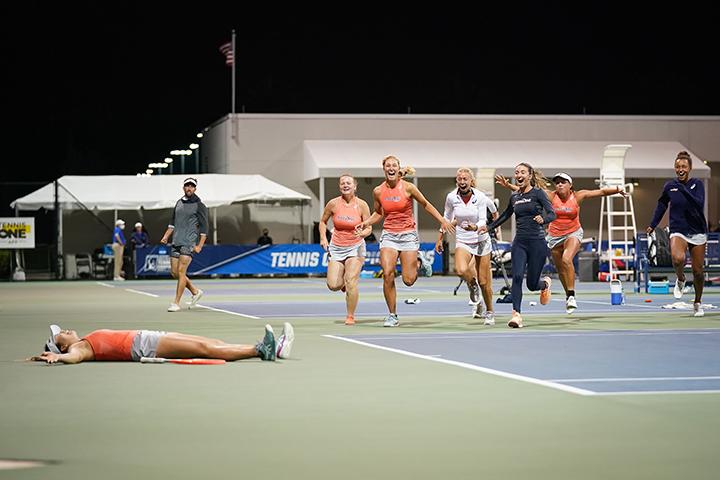 Fifth-year senior Shiori Fukuda lies on the court as her teammates rush toward her to celebrate Fukuda’s clinching match victory over UCLA’s Vivian Wolff. Fukuda defeated Wolff 6-7 (7-9), 6-3, 6-2 to give Pepperdine Women’s Tennis a 4-3 victory and send them to the NCAA semifinals. Photo Courtesy of Manuela Davies | USTA

The storied program, which has finished in the top 40 nationally in every season since 1988, had never before reached a national team semifinal. The Waves were winless in seven previous quarterfinal appearances.

That changed Wednesday, as No. 5 Pepperdine defeated No. 4 UCLA 4-3 in a thrilling match that lasted more than four hours.

“It’s rewarding to have them experience something like this,” Head Coach Per Nilsson said. “It’s special, and we’re not done yet.”

The Waves crushed No. 20 Michigan 4-0 in Sunday’s Round of 16 at the USTA National Campus, but knew their crosstown rivals would provide a stiff test.

In the previous three meetings between the Waves and Bruins in 2021, the Bruins took the doubles point. UCLA went on to win two of those matches.

“Lisa and Ashley, when they are excited and happy, they can beat anyone,” Nilsson said.

The doubles point would later prove to be the difference in a tight match. The return of junior Anastasia Iamachkine, who had missed the entire season until the NCAA second round due to injury, was a difference-maker for the Waves in the Michigan match.

Iamachkine and sixth-year senior Jessica Failla fell on doubles court three against UCLA, but the other two doubles teams won, including the new team of Fukuda and Pachkaleva.

In singles, the Bruins quickly put pressure on the Waves, winning courts five and six in straight sets to take a 2-1 lead in the match.

After a brief rain delay, the Waves battled back. Freshman phenom Taisiya Pachkaleva, the 89th-ranked singles player in the country, defeated UCLA junior Elysia Bolton in three sets. Failla won a first-set tiebreak and a tight second set to take court two and give Pepperdine a 3-2 lead.

The Bruins would not go quietly, as seventh-ranked Forbes defeated Lahey in the third set. All attention turned to court four, which was still early in the third set as Pepperdine fifth-year senior Shiori Fukuda, a graduate transfer from Ohio State, took on UCLA senior Vivian Wolff.

“I was just trying to focus on my match because I knew the whole match was going to come at me,” Fukuda said.

The Waves mobbed Fukuda on the court in celebration of their first-ever appearance in the NCAA’s final four.

This was Pepperdine’s fourth quarterfinal appearance in five seasons, all under Nilsson. Most recently, the Waves lost to Stanford in 2019, when the Cardinal went on to win the national title.

The Waves will face an even bigger challenge in the semifinals, as No. 1 North Carolina looms on Friday, May 21. The Tar Heels are undefeated at 30-0 and have reached the NCAA semifinals in each of the past four seasons.

“If we just take care of business and just focus on what we can control, we’re a good team,” Nilsson said.

One of North Carolina’s 30 victories was against the Waves, a 4-1 win at the ITA Indoor National Championships in February. The Waves were missing Lahey and Iamachkine in that match.

“I hope we play North Carolina again in May,” Nilsson told the Graphic after the ITA Indoors tournament. “If we’ve done our job, I think it’s going to be a different story.”