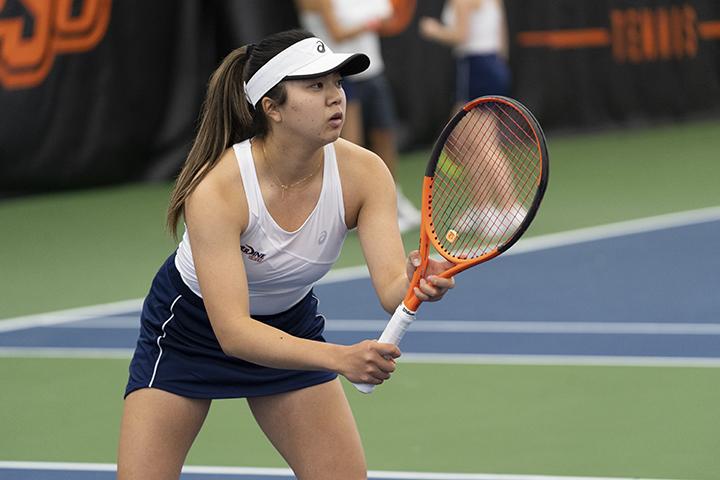 The Waves solidified their top-5 spot at the tournament, defeating No. 6 Georgia Tech 4-2 in the quarterfinals on Feb. 5 before battling with No. 1 North Carolina and No. 2 UCLA on Feb. 6 and 7, respectively.

Despite losing two of their three matches at the tournament, the Waves moved up to No. 4 in the rankings and garnered valuable experience against top competition.

“The tournament — as important as it is and the teams that are there — you can’t get that at home and in practice against teammates,” Head Coach Per Nilsson said.

Pepperdine fell 4-1 at the hands of the top-ranked Tar Heels in the semifinals and 4-2 to the Bruins in the third-place match, finishing fourth.

The tournament, hosted by Oklahoma State University, included five of the top six teams in the nation, and 8 of the top 13.

“We took some Ls, but I think we know that we’re there,” fifth-year senior Shiori Fukuda said. “We have the potential to beat those schools. I really believe that we can be the number one team in the nation this year.”

Obstacles on the Road to Stillwater

The Waves faced several challenges before the tournament even began: inexperience, indoor surface and injury.

Of the eight players who traveled to Oklahoma, four are newcomers, and each saw extensive court time. Fukuda is a transfer from Ohio State who arrived at Pepperdine in October, and the other three are freshmen.

Indoor courts generally play faster than outdoor ones, and the Waves had to adjust after just two days of practice in the facility.

“We practice outdoors, so to play indoors and get to the semifinals, I think that says a lot about the level of tennis that girls on our team are playing,” sixth-year senior Jessica Failla said.

Ashley Lahey, the nation’s No. 1 player for much of 2019-2020, did not play at all in Stillwater. Lahey suffered from wrist tendinitis following the team’s Jan. 25 victory over USC, and two cortisone shots prior to the tournament were not enough to relieve the pain. Lahey traveled to Stillwater with the team but was not entered in the lineup.

“I wasn’t able to actually hit at all throughout the whole weekend but it was really good to be there to support the team,” Lahey said.

Nilsson said the team missed Lahey on the court, but her absence allowed other players a chance to compete against top-notch opponents.

“It was an opportunity for someone else to play, and in one way, maybe that was the best thing for us,” Nilsson said.”Yes, it hurt us not having Ashley there for sure, but I think we gained a lot of experience.”

Disadvantages aside, the Waves came out swinging against Georgia Tech, losing the doubles point but roaring back to win on four of the first five singles courts.

“We really wanted to get through that first Georgia Tech match to get an opportunity to play to the top teams,” Nilsson said. “We knew, if we did that, we’re going to play two top-three teams in the country back to back.”

Nikki Redelijk, a true freshman from Florida, battled to clinch the match, winning 7-5, 2-6, 6-4 on court 6. Nilsson said the pressure of the match would prove valuable for Redelijk in the long run.

“We can’t get that anywhere, so she’s now gone through that, and the next time she does, she can lean on that experience and hopefully be more relaxed and feel better,” Nilsson said. “That was not an easy situation that she was in and she didn’t play her best, but she came through and that was the most important thing.”

No. 1 North Carolina Proves Too Much for Waves

The next day, the Waves encountered North Carolina, a team which featured three players ranked in the top six in the ITA’s most recent singles rankings.

The Tar Heels qualified for the final of the ITA Indoors for the seventh consecutive season, but Nilsson was pleasantly surprised with the way his team competed.

“There was a point in that match where I thought we were going to win, even though we are not clicking on all cylinders right now,” Nilsson said.

Again, the Waves dropped the doubles point, then lost on singles courts three, five and six, to let Carolina clinch the match.

Fukuda fought to a third set against No. 4 Sara Daavettila on court two, but the match went unfinished. Taisiya Pachkaleva, a true freshman from Russia, earned a straight-sets win on court four.

“Taisiya, she has the potential to be one of the best in college,” Nilsson said.

Despite losing on court three against Georgia Tech, Pachkaleva bounced back against the Tar Heels, defeating a higher-ranked opponent 6-4, 6-0 for the Waves’ lone victory of the day.

“She lost to a player that she normally would never lose to,” Nilsson said of the Georgia Tech match loss. “But she used it and was able to — by the next day — find her groove and figure out some things. By the end of that weekend, she felt really good.”

No. 2 UCLA Squeaks Past Pepperdine

The next day, Pepperdine squared off with Southern California rival UCLA, another team with three top-20 players. Again, the Waves lost the doubles point. The doubles trouble did not bother Nilsson nor Lahey, as they attributed it to Lahey’s absence and the lack of practice in doubles.

“All fall, we weren’t allowed to practice doubles,” Lahey said. “These are all new teams, new players. It’s really difficult to get the doubles point but our energy was good in doubles and so when we came out to singles, that’s really our specialty.”

Nonetheless, the Waves came exceptionally close to defeating the Bruins. Pachkaleva won handily on court four and Failla won in three sets on court one.

Fukuda battled to a third-set tiebreaker against No. 9 Elysia Bolton, getting to match point several times but narrowly losing 6-2, 4-6, 7-6(3). Had Fukuda won the tiebreaker, the Waves would’ve been in excellent position to win with Lisa Zaar up 5-3 in the decisive third set on court five.

“To compete with [UCLA] the way that we did just shows you how good the depth is of our team,” Lahey said. “We’ve got eight players who could all beat almost anybody in the country. We’re all very similar level — I feel like we could flip our lineup on its head, and it would be basically the same team.”

Fukuda, a grad transfer initially from Japan, is a key addition to a team already headlined by two graduate students, Lahey and Failla. The 2020 Big Ten Athlete of the Year, Fukuda graduated from Ohio State in 2020 and wanted to come to the West Coast.

She could not come to Malibu to train until October, but quickly became part of the team.

“Shiori is an amazing tennis player, amazing leader,” Failla said. “I think the experience that she has is invaluable to our team.”

Fukuda is currently ranked No. 12 in the nation and said she is training harder than ever before.

“When I was in Ohio, I was always the number one player,” Fukuda said. “Not necessarily beating everyone on the team, not like that, but for sure having Ash, Jess and everyone — even the freshmen — everyone’s so good. Having those players in practice, I think it really helps me.”

She joins Lahey, the current top-ranked player, and Failla, who has been on fire lately, at the top of the Waves lineup.

“Jess, she might be the best player in college right now,” Nilsson said. “I mean, she is so confident, playing so well.”

After moving up to the No. 1 singles court for Pepperdine’s win over USC on Jan. 25, Failla had a remarkable weekend in Stillwater. She defeated No. 13 Kenya Jones of Georgia Tech, 6-3, 6-3, then nearly beat No. 3 Alexa Graham of North Carolina, but was halted by a clinch point. Failla led Graham 7-5, 5-2 when the match ended.

“I always try to be really confident when I’m out there playing but at the end of the day, it’s tennis. Anything can happen,” Failla said. “Obviously, I always want to be able to finish my matches, but it is a team sport.”

Failla completed the weekend with a victory over No. 7 Abbey Forbes of UCLA. Lahey had nothing but praise for her teammate.

“Jess played absolutely unbelievable this weekend, every single point,” Lahey said. “She looked like every single ball was the most important ball that she was going to hit in her entire life.”

Failla, currently ranked No. 33 in the country, will undoubtedly ascend in the next ITA singles rankings, as her last four singles matches have resulted in three victories and one near-victory, all over higher-ranked opponents.

“Our goal is to have six girls at the end that are playing lights-out and pushing each other, and on any given day, they can do it,” Nilsson said. “I think we have three right now, but we have the potential to get to five or six in a short period of time if we all buy in.”

Newcomers Bond with Returners in Stillwater

Sophomores Zaar and Astrid Olsen, Pachkaleva, Redelijk and redshirt freshman Lexi Ryngler are each working to raise their game to the level of their experienced teammates Failla, Lahey and Fukuda.

Ryngler, who is originally from Calabasas but transferred to Pepperdine from the University of Texas, got a chance to compete on singles court three in Stillwater.

Fukuda said the contributions of the younger players was “impressive.”

One player missing from the Stillwater trip was junior Anastasia Iamachkine, who suffered a knee injury and had surgery in the summer of 2020. Nilsson hopes Iamachkine will return to the court before the end of the season.

Ultimately, the nearly week-long trip allowed the team to compete together on the road for the first time with newcomers and returners together.

“National Indoors was an amazing trip for us because we were able to spend more time together and really get to know each other better,” Failla said. “When you’re fighting next to people trying to win for Pepperdine, it’s really an amazing bonding experience.”

Four days following their return to Malibu, the Waves took on USC at the Ralphs-Straus Tennis Center again. The Waves had more trouble with the No. 16 Trojans this time, winning only 4-3.

Failla continued her dominant streak with a win on court one, but Lahey lost on court two in her return from the wrist injury.

The USC victory was the first step on a three-month journey that Nilsson hopes will lead to the national championships. Nilsson said the team will analyze the videos of their matches in Stillwater and learn from them.

“We want to be the team that improved the most from Stillwater till May,” Nilsson said. “That is the key for us.”

The Waves will not see Georgia Tech nor North Carolina again this season until a potential showdown at the NCAA Championships in late May in Orlando, Fla., but they do play UCLA twice more in the regular season.

“I hope we play North Carolina again in May,” Nilsson said. “If we’ve done our job, I think it’s going to be a different story.”