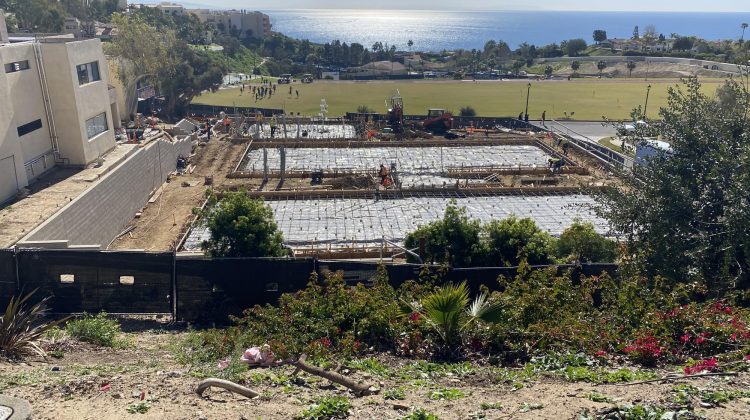 A construction zone between Seaside and Eden House and no fitness center in sight greets students according to winter break. According to an October Graphic article, the University projected completion of the temporary fitness center at the end of 2021.

“To have these delays is super frustrating to us,” Phillips said. “And we know it’s frustrating to our students. So we hate that. It’s very rare for us to be late on projects but the pandemic has just created so many challenges.”

The temporary fitness center is an important step towards the construction of the Mountain, which will be a larger facility in Rho parking lot, said Tim Perrin, senior vice president for strategic implementation. Because the Mountain is years from completion, the temporary center will provide students with a wellness facility in the interim.

“We wanted to make sure that there was something available to students sooner than that, that we had enhanced fitness facilities for our students as soon as possible,” Perrin said. “And so the idea of constructing this temporary facility now as we plan for and look forward to the mountain.”

Causes of the Delay

In a Feb. 2 email to the Graphic, Marie Chu, senior project manager, wrote the most recent delay was a result of the Malibu campus experiencing multiple rain events, including a record breaking 9 inches of rain in a 24-hour period Dec. 30. Water pooled in the site until the construction crew could pump it out.

“You just have to let the subsurface dry to a certain level before they can begin work again,” Phillips said. “So that was actually a two-week delay.”

More general delays include labor and material shortages due to COVID-19 and water infiltrating the subsurface of the site, Phillips said.

“Once we started digging down from the foundation we couldn’t find the source of that water,” Phillips said. “And we couldn’t stop it. And we had to, because it could be an underground stream which we know we have, we actually had to stop or redesign — we call it shoring to make sure that the ground stays where it is and won’t move — we had to redesign that shoring.”

The water affected geotechnical reinforcements, Philips said. The University submitted plans to their construction company for new shoring involving concrete but needed to wait for the contractor’s approval before construction could move on.

Chu wrote the extent of the delay was not known until after the publication of the October Graphic article.

Early on in the construction, Phillips said, workers found a pipe which was not on any of the University’s landscape plans, and most likely dated back to when the Malibu campus was built in 1972. The pipe was made with transite, a building material that contains asbestos, a potentially hazardous substance.

“You have to go through a lot of regulations and protocols to keep everybody safe,” Phillips said. “And that added weeks and weeks so the list goes on and on. It’s been a disaster, but those are the main reasons for this delay.”

Pepperdine’s agreement with the county and its neighbors regarding limited working hours, Chu wrote, have made it difficult to make up the time lost to delays.

Firestone Fieldhouse will continue to act as a fitness center until construction is completed, Phillips said.

Effects of the Delays

These delays will cause an increase in cost due to the increased construction time, Phillips said.

“We always carry contingency in our budget because there’s going to be unexpected things, in particular things in the subsurface,” Phillips said. “So, these really haven’t materially changed the cost. There’ll be some increases but our team is very, very diligent about holding our contractors to their contract and reviewing anything that they charge us.”

Phillips said the delay has not changed the overall plans for the building.

“We’re keeping the exact same scope,” Phillips said. “It’s going to be 5000 square feet, which is like double what our one is now. And the windows and the restroom. All that is still part of the scope.”