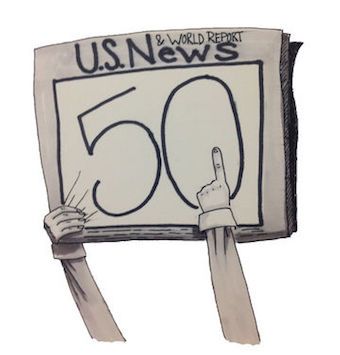 News about Pepperdine’s recent ranking as U.S. News & World Report’s 2017 50th National University in the United States quickly spread throughout campus. Plenty of Seaver students were proud to share the news to family and friends, making sure they knew exactly how strong our university stands in comparison to others. However, as great as this news is for Pepperdine and its reputation, it tells us that there still remains things that Pepperdine as an institution can improve upon. How to do so can be found within the source of the rankings.

The U.S. News & World Report compiled the rankings, and their website explains how they placed the schools on their list.

First, each school is placed into a category based on the type of university it claims to be (liberal arts, research, etc.), and also, at times, by region. Afterward, they gather data about each school in up to 15 areas relating to academic excellence, and each area is given a weight. Finally, the college rankings are determined by their composite, weighted score. The top three-fourths of schools in each category are then given a ranking and, of course, bragging rights.

Knowing this, it makes more sense as to why Pepperdine falls where it does on the list. We are sitting in a good spot, with our ACT average around 29 and our SAT average at 1906, according to the Seaver Office of Admission. The data Seaver reported to U.S. News & World report also included a 92 percent freshman retention rate, 74 percent four-year graduation rate, 13-1 student-faculty ratio and about 80 percent of the student body receiving financial aid. These numbers paint a pretty picture for our campus.

In addition, our ranking tells us there’s still higher we can go, and the way this list is formed gives us tangible ways to see our campus ranking improve. One aspect that Pepperdine students affect is alumni donations. Whether it’s the Pepperdine 5 for 5 campaign, or alumni replying to the calls from Waves On Call (or at least not immediately hanging up on them), students and alumni can continue to improve Pepperdine’s rankings — thereby increasing the value of our Pepperdine degree after we graduate.

But we as a Pepperdine community need to remember that while the improvement in our rankings is great, matters such as diversity and inclusivity are just as crucial.

Despite the fact that according to a study by Priceconomics, Pepperdine came in as the 11th most diverse college out of Best College’s ranked top 100 in America, there were students who pointed out that inclusivity within the school felt much lower – leading to a protest in the cafeteria last year on the status of race issues on campus, and a protest off campus the year before due to Pepperdine’s rocky relationship with the LGBT community.

Our ranking as the 11th most diverse school out of the top 100 in the nation might serve as a pat on the back, but there are still areas where we can improve. We should strive to ensure that the campus feels as inclusive as it is diverse because a student body that is diverse but fragmented and exclusive creates an environment that may turn away future and current students who could better our community.

Despite how early in the school year it is, Pepperdine has already been recognized and given credit for improvements it has made since the last school year. This gives us hope that perhaps the 2016-2017 school year won’t be defined by things like last year’s racial tensions, federal trial notices from members of the LGBTQ+ community or resemble the disaster 2016 has been up until now.

After the events of last academic year, diversity and the inclusivity of the campus environment have continued to be up for discussion. While diversity and inclusivity didn’t play roles in Pepperdine’s ranking as a top 50 school, and with The U.S. News & World Report’s ranking system, likely never will, they regardless remain important topics for the Seaver undergraduate community to pay attention to. 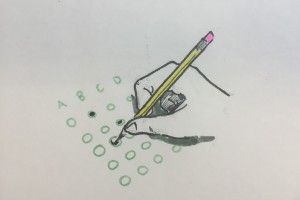 Art by Peau PorotesanoPepperdine students, like most college students, are more than a little familiar with standardized...
Copyright 2018 Pepperdine Graphic
Back to top