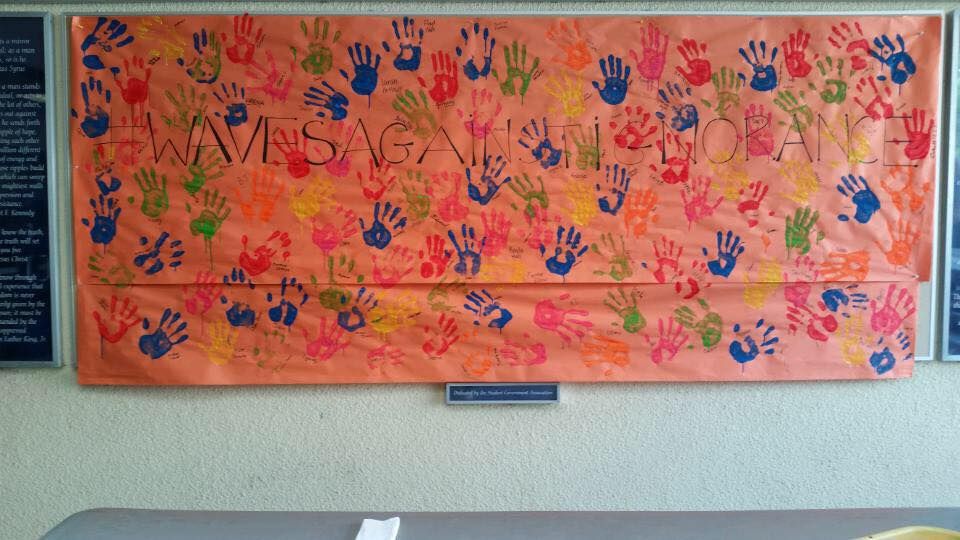 Photo Courtesy of Waves Against Ignorance

In the wake of the “blackface” incident that took place Thursday, Feb. 4, students and staff have continued to share their concerns, via emails to the Graphic and comments on Facebook, about the incident, the circumstances surrounding it and the original story published on the Graphic’s website.

As reported in a previous Graphic article published Feb. 6, a student in the Miller freshman dorm altered a Snapchat photo to portray himself in “blackface” and included the words “dare to dream” and “Black History Month.” The photo was then shared in Miller’s group Facebook chat, after which freshman Joshua Jones shared the image on Pepperdine’s Waves Against Ignorance Facebook page and also reported the incident to his resident director, prompting the administration to send a university-wide email denouncing the incident.

Jones said, “He [the student in the image] has been my closest friend in the house, and I think someone who was racist wouldn’t be friends with the only Black kid in the house.”

According to Jones, this incident arose immediately after someone posted on top of his “Black Fact of the Day” flyer on the dorm billboard in Miller, stating that what Jones posted was incorrect. He added that someone, “put pushpins on the board over the image in the shape of a swastika.”

Jones said he didn’t understand why someone would want to argue with him about something that was supposed to be positive and intended to bring recognition to the month.

“It was my small way of celebrating Black History Month,” he said.

Speaking about the totality of the events, Jones said, “This is kind of a no-win situation. If he [the student in the image] gets kicked out, I’m losing one of the closest friends I’ve made here, but if nothing happens, other people will think they can get away with things like this.”

Jones said he spoke with his friend about the photo after the incident occurred.

“We stayed up until 3:30 in the morning talking about the situation and he understood,” Jones said. “I know that something needs to happen, but I don’t think he should be kicked out of school.”

The image in question was first brought to Jones’ attention when it was posted in the Miller Facebook group chat. Jones said he was disputing the legitimacy of his “Black Fact of the Day” with another member of his house when someone added the “blackface” rendering to the group chat. Jones said he wasn’t sure whether the student who posted it did so in an attempt to be funny or was trying to bring the image to everyone’s attention.

Jones went on to say that six other members in the group chat “liked” the image.

“The fact that no one sees that something of this magnitude is a problem, that’s an ever bigger problem than it being posted in the first place,” Jones said.

Before posting the image to the Waves Against Ignorance Facebook page, Jones said he contacted his resident director and spoke with one of his friends in the Black Student Association about the incident. Jones’ RD reported the incident to Associate Director of Residence Life Brandon Farmer, who then passed the information to Tabatha Jones Jolivet, the associate vice president of Student Life, and Jon Mathis, the associate dean of Student Affairs.

“It’s just unfortunate, first of all,” Farmer said. “It’s frustrating from my perspective. I mean, it’s just such a complex issue, but the reality of it is that it’s frustrating that [the “blackface” image] got posted.”

Farmer added that his first reaction after learning of the incident was to reach out to Jones and the other students involved. His main goal was to provide support to Jones and to inform the other two students that their actions were not acceptable.

That’s when Jones said he decided to post the image and an account of the surrounding events online.

“After my post on the Waves Against Ignorance page, it kind of blew up,” he said.

After Jones’ post went up, Farmer said he again reached out to Jones to offer support, but said he seemed to be OK at that moment. Farmer said it was important for Jones to know that there was another person there to support him and also connected him with Jolivet.

Over the past week, there have been many reactions to this incident via Facebook and the previous account of the incident published on the Graphic’s website.

Most comments on Jones’ original Facebook post of the image included words of sympathy and encouragement. Others demanded action from President Andrew K. Benton and referred to the offenders as “repugnant white boys.”

In regard to the outcry from students to see action from the administration, Farmer pointed out the need for education by everyone, students and staff. He also pointed out the disconnect between members of the Pepperdine community, in regard to some being highly reactive to situations like this and others saying things like “what’s the big deal, it was a joke, or those words don’t have power.”

Farmer said he wants to ensure that those in his department are not the ones who don’t see it as a big deal. “I want [my department] to hurt with those people that hurt,” he said.

Miller’s Spiritual Life Adviser Lionel Ong and Resident Adviser McReynolds “Mac” Sommers could not comment any further on the incident. The student responsible for the “blackface” image chose not comment as well.

Vice President of Student Life Mark Davis wrote in an email the current and future actions of the administration regarding this incident:

“I am grateful to be a part of a community where we can talk openly about our shortcomings and take decisive action for improvement,” Davis wrote.