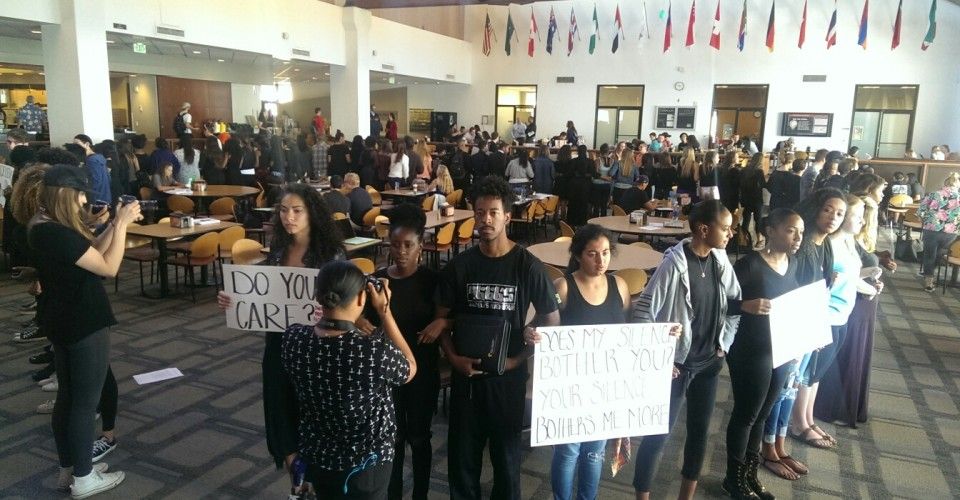 Some 100 students, dressed in black, entered the Waves Cafe after 11 a.m. on Friday to peacefully participate in a sit-in. The demonstration was to show solidarity with University of Missouri students who are protesting racism and to promote the protest’s hashtag on social media: #wavesagainstignorance.

Junior Anthony Sanford, one of the organizers of the protest, said this was the first of many demonstrations planned for next week.

“The administration could be more responsive and address different social issues that are happening on campus — specifically the Yik Yak situation,” Sanford said. “We thought that the response was not adequate and that many students on campus still aren’t aware of what happened.”

Students moved the peaceful protest to the Thornton Administrative Center at 11:42 a.m. and left just before 2 p.m., ending the protest.

“This sit-in is a collective multicultural and multi-ethnic effort, encompassing students, faculty, staff and alumni. We are calling on Pepperdine University Senior Administration to appropriately acknowledge the concerned sentiments of minority students at Seaver College. We deem appropriate acknowledgment constitutes in the form of Senior Administration implementing at least one of the following mandates:

We find our efforts to be definitely aligned with the affirmations of our Christian university and our Christian rationale for diversity. We ask that all students, faculty, staff and alumni stand with us in this effort to maintain Pepperdine University’s “commitment to the highest standards of academic excellence.”

Sanford said they wanted administrators to address not only race but also sexual assault and gender issues on campus.

“We’re not here to promote any type of violence; that’s not our goal,” Sanford said. “Our goal is basically to inform the campus of what’s going on and try to make positive change from there. I want that to be very clear; our goal is not to enforce any type of violence on campus. Everything we do will be peaceful, and it will have a positive message behind it, and how we can better our community on campus and grow together and not continue to remain divided on certain issues.”

Pepperdine Public Relations announced in an email to students at 3:17 p.m. that President Andrew K. Benton will be making a special address Monday at 7 p.m. in Smothers Theatre: “In light of recent events at universities across the country, President Benton will share a message he delivered in October to University leaders that we hope will provide a framework and a sense of urgency to advance the conversation on race and racial diversity at Pepperdine. For those unable to attend in person, the University will simulcast the event. Details regarding the simulcast will be posted on the Community News website.”

Benton said in a statement to all Seaver students that he had addressed racial issues and racial strife with University leaders Oct. 8, and it is that address he’ll be sharing with the Pepperdine community Monday.

“I believe in free speech, but I also believe in truth and fairness and a vigorous exchange of views in a healthy manner,” Benton said in the statement. “Social media, particularly when messages are penned anonymously, do not meet that standard. Words that hurt and are intended to hurt do not advance important ideas effectively; in fact, they alienate and divide.

“Today’s student-led protest was important,” Benton continued. “It was appropriate and good. It was timely in ways this message to you was not. While I have been active since learning of the harmful race speech, I have not been public and I should have been. I hope Monday evening will be the beginning of productive communication on this important, University-wide matter. I intend to speak frankly and personally.”

Dean Michael Feltner issued the following to the Graphic Friday evening, “I am proud of the students who stood in silence and solidarity to act and express their concerns. I support them and strongly affirm that there is no place for racial intolerance and hatred in our community.  On Monday, President Benton’s address will continue the important conversation initiated by students this afternoon.  I look forward to listening and being an engaged participant in the important discussions that will follow.”

The Graphic will continue to provide updates as the story unfolds.

This comes as protests are erupting at Universities around the country, specifically at the University of Missouri.

At Pepperdine, controversy emerged concerning Yik Yak posts that were circulated on Facebook and Twitter two weeks ago causing several groups on campus to respond.

Newswaves produced a story by Carly Hanna on race Thursday evening, the day before the protest took place on campus;

The story was updated at 2:25 p.m. with confirmation from senior administration that a statement will be released and news the protest ended.

The story was updated at 3:10 p.m. with comments from a protest organizer.

The story was updated at 3:50 p.m. with email from Pepperdine’s Public Relations office.

The story was updated at 4:35 p.m. with statement from President Andrew K. Benton.

The story was updated at 6:37 p.m. with statement from Dean Michael Feltner.

The story was updated at 9:29 p.m. with a link to the Newswaves package on race. 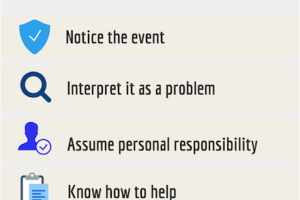 Step UP! Pepperdine held a Convocation regarding how to properly handle a friend with an eating disorder, and provided detailed...
Copyright 2013 Jupiter Premium Magazine Theme
Back to top