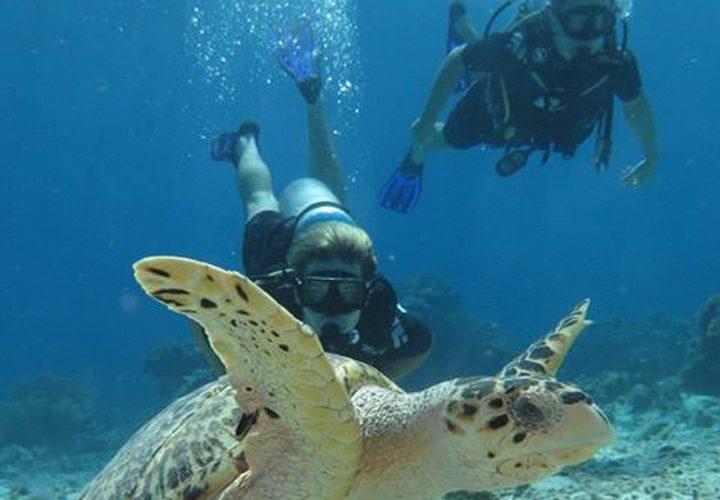 Some students believed they would have anything but a normal experience when classes went online. Several sports-related clubs on campus ensured that this wouldn’t be the case.

While COVID-19 forced students to learn remotely, the leaders of Climbing Club, Scuba Club, Esports and Running Club said their teams seek to build community despite their inability to meet in person.

“COVID kind of put a damper in our plans for this semester,” senior Kyla Lucey said. “I’m super honored to be president for both Climbing and Scuba Club and hope to use my time as leader to foster some sense of a Pepperdine community as best as I can under the circumstances.” 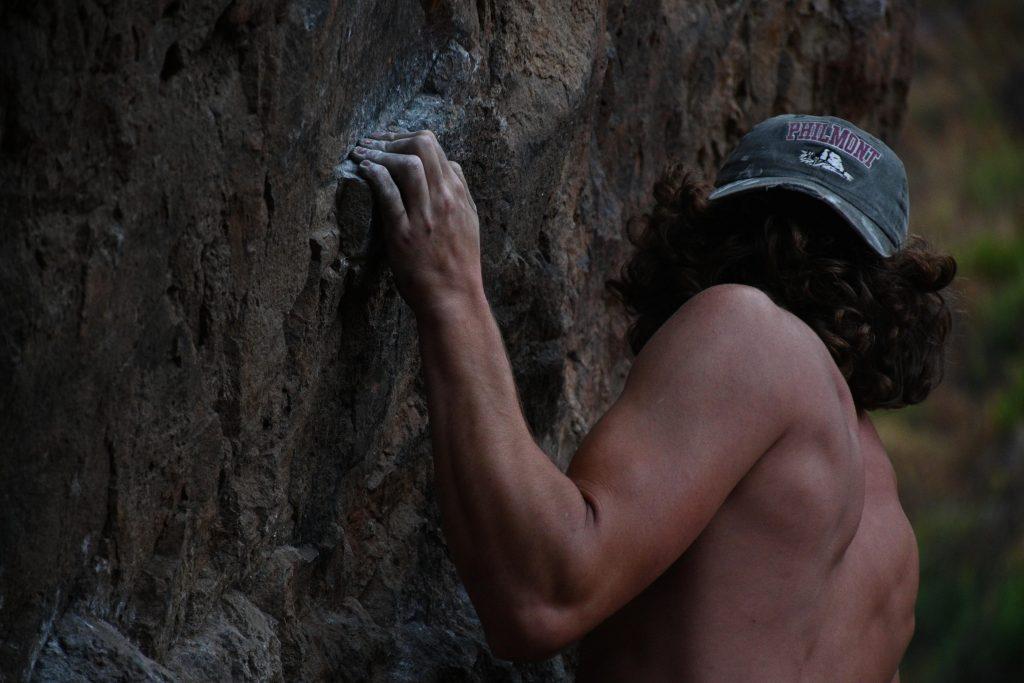 Sophomore John Palmer climbs the Espresso route at Echo Cliffs, California, in the summer of 2020. The climbing club decided to continue operating through the fall 2020 semester. Photo courtesy of Kyla Lucey

Senior Kyla Lucey, Climbing Club President, said she never imagined her love for rock climbing would lead her to a newfound community of Pepperdine students.

Although there are many amenities available to students on campus, Lucey said she wanted to introduce students to an alternative way of getting out in nature.

“When I came back to Pepperdine [from abroad], I realized there was a community of climbers, but we weren’t all together,” Lucey said. “We all didn’t know the other climbers on campus, so because of that, I really wanted to create a community where climbers could really have fun.”

Since its inception last fall, Lucey assembled an executive board of climbers to aid in introducing the Pepperdine community to the sport of rock climbing.

The club organized numerous events for people of all levels of rock climbing experience while school was still in session, including frequent trips to the local climbing gym Boulderdash.

“We got to teach people how to climb and created an affordable way to get people climbing,” Lucey said.

“The convo last year was based on John Muir and his meditations in nature and how that relates to the Bible,” Lucey said. 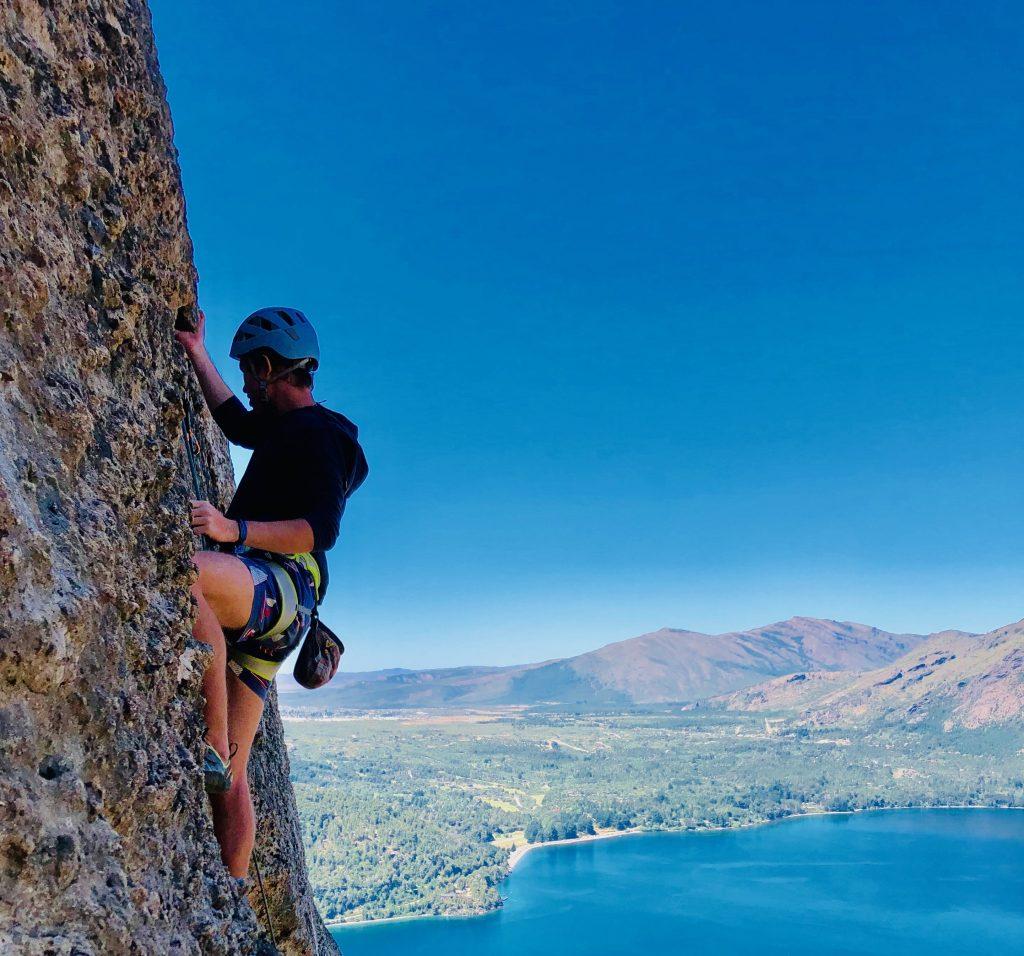 Senior Jacob Walker scales California’s Buttermilk Boulders via the Bishop route in the summer of 2020. Walker continued to climb in the Malibu area during the school year. Photo courtesy of Kyla Lucey

Like other clubs on campus, Lucey said she had planned climbs before classes moved online. Despite the uncertainties of the future, Lucey said she still had things in the works for members to stay involved and active.

“We can’t organize climbs, but there’s a lot of amazing rock in the Malibu area,” Lucey said. “There’s a lot of people living with their belay buddies — that’s the person you can go climbing with — which is really lucky because members have been reaching out about how they’ve been really lucky to have a buddy in their home. A lot of us go climbing in Point Dume or just around Malibu.”

While new regulations demand that everything be virtual, Lucey said she still has high hopes for the club and member involvement throughout the semester.

“We’re going to focus more on creating opportunities for people, whether it be finding some way to do remote at-home workouts for climbing or strength training to increase grip strength,” Lucey said. “We’re just finding different ways that we can prepare for the time that we are back together.”

Lucey said she encourages new members to get involved this semester, whether it be by reaching out to her via email or by following the Climbing Club Instagram. 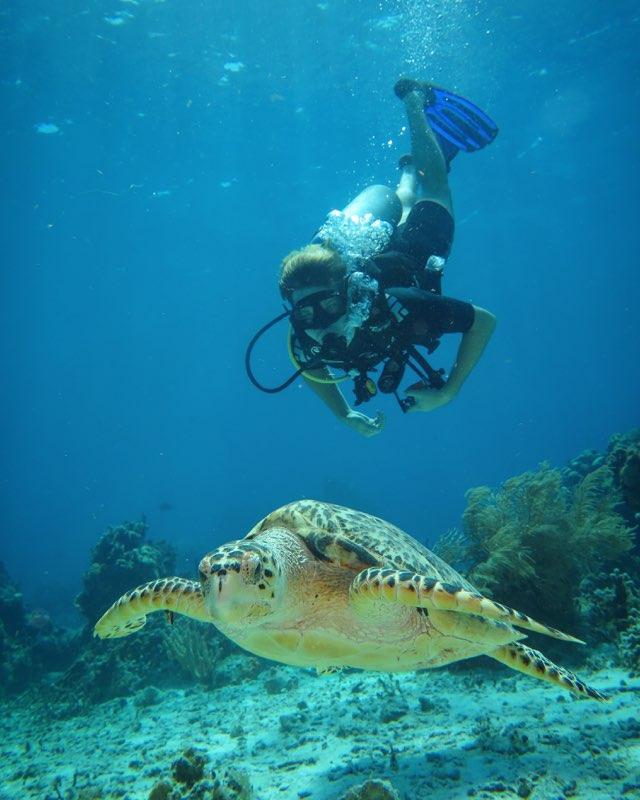 Senior Jon Feyer plunges deep by a sea turtle during a scuba diving trip in Mexico. While the Scuba Club is unable to meet in person, Lucey said she posts scuba safety and reaches out to new members on the group’s social media platforms. Photo courtesy of Jon Feyer

Lucey became the perfect candidate for Scuba Club president after being the only recipient of the club’s scholarship during her junior year.

Lucey said she inherited the club this year after former president Jon Santini graduated. While Lucey became scuba certified only last year, she said scuba diving consumed a large part of her time in 2019–2020.

“I really invested a lot into [scuba diving],” Lucey said. “I think that’s kind of how I got the ball rolling on becoming president. I’ve also always been really interested in the scuba culture and community for awhile.”

Lucey said she hasn’t been able to set up club events or help members become scuba certified due to COVID-19 restrictions barring social gatherings. Since restrictions are starting to lift in the Southern California area, Lucey said she still wants to follow through with getting members diving certified.

“Even though things are weird, I’m hoping to offer the scholarship,” Lucey said. “We work with Malibu Divers to help some students get their full certification for their open water diving. The club also pays for it in full.”

Through social media, Lucey said she has also been able to get in touch with new members and post about ocean safety. Since much of training is online, club members are able to learn about the water and tides remotely.

Lucey said she encourages new members to follow the Scuba Club on Instagram, join the club on Peppervine or email her for updates on club activities.

“It’s an amazing community,” Lucey said. “Scuba is just something that I know a lot of people don’t get to do, and it’s really cool that we’ve created opportunities for students to do it affordably. You can go to the beach, you can see the waves, but we get to see what’s underneath.”

The Pepperdine Esports team began competition in the fall of 2019. The team continued to compete throughout quarantine, bringing home the win at the WCC Gaming in Place Challenge. File photo

Last fall, the Esports team excelled in the West Coast Conference championship, winning both the League of Legends and Overwatch competitions.

Senior manager Grace Ramsey said they have no intention of slowing down.

“What’s really, really nice about esports is that COVID didn’t affect it as much as it could have,” Ramsey said. “The collegiate leagues did suspend in the spring, mostly out of consideration for the students whose lives upended and had to go home. They were also worried about internet and accessibility issues and stuff like that.”

While the transition to online halted some competitions, Ramsey said Pepperdine Esports took home the win at the WCC Gaming in Place Challenge, a final tournament for the students who would have gone to the playoffs.

“We were able to really keep the community alive, alive online, which I’m really, really happy that we were able to do,” Ramsey said. “We’ve just tried to keep that going through the year. […] and are looking more toward that online community that comes with gaming and esports.”

While quarantine protocols don’t allow for in-person gaming competitions, Ramsey said the team hosted tryouts and is planning matches between team members and other Pepperdine students.

Ramsey said they encourage all levels of gamers to get involved recreationally or by competing on the Esports team.

“If you’re just looking for a community of gamers, if you want to just go to a watch party for the League of Legends Worlds or something coming up, or even just have a casual game night, you can go there and find some sort of community,” Ramsey said.

Ramsey said they hope that esports not only leaves a legacy within the gaming community but also creates a platform for all of the Pepperdine community.

“I want Pepperdine Esports to become this amazing, wonderful thing that people come to Pepperdine wanting to participate in or want to be a part of, even if they’re not on the team,” Ramsey said. “So, lots of big dreams but I think they’re achievable. I know that the next generation of people will be able to continue that dream, and that’s what I want to see.” 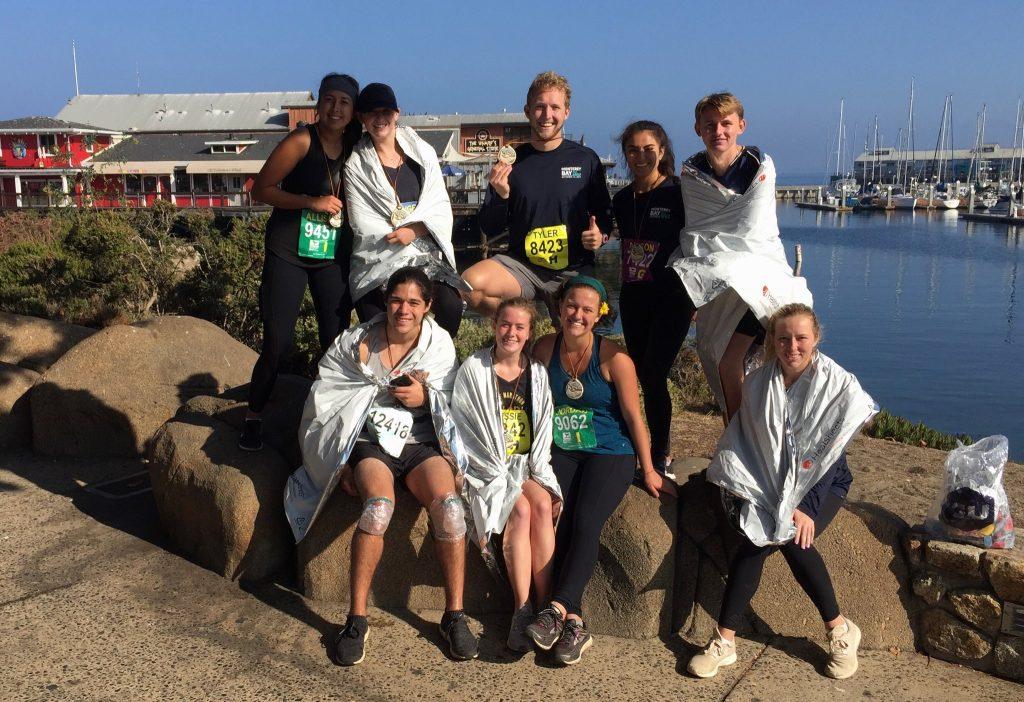 Senior Running Club President Zach Dalzell said he knew he shared a love for running with other Pepperdine students; he would just have to find them.

Dalzell said he started running in middle school and has continued to present day. He said he wanted to find other runners on Pepperdine’s campus, or at least introduce the student body to running recreationally.

Since its creation last fall, Dalzell said his club has amassed about 25 members. He, along with 17 members, signed up and paid the entry fees to the The Great Race of Agoura Half-Marathon before COVID-19 shut down the event.

“We were scheduled to run a couple of runs together but all that got canceled,” Dalzell said. “So we got nothing off the ground last semester, unfortunately.”

Despite club members being in different states across the nation, Dalzell said he still keeps his members running and connected through GroupMe and the phone app Strava.

“Running is kind of a solitary thing,” Dalzell said. “I’ve kept in touch with people doing their own different types of training for different events, but obviously there’s no races you can really do.”

“For this semester, if you train with us for six weeks for a 5K and complete our training each week, you get a prize or a reward,” Dalzell said. “I think that’ll be a raffle of $150 of running gear.”

Dalzell said the best way to get involved with the club is to email him or join the Pepperdine Running Club group under the Strava app.

“We’d love to have more people come out and run with us — virtually run with us,” Dalzell said. “We have some pretty cool stuff and some pretty cool prizes for this semester. Running is one of the few ways to stay healthy and happy, and it’s really good for you.” 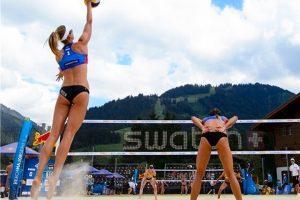 Beach volleyball player Kelley Larsen (left) serves the ball during a professional match in Switzerland. After a decorated...
Copyright 2013 Jupiter Premium Magazine Theme
Back to top