Pepperdine jumped into the world of eSports by starting their own program this summer and participating in the LA Valiant‘s Road to Kit Kat Collegiate Overwatch Tournament.

eSports, also known as Electronic Sports, is competitive, organized video gaming in which competitors from different teams face off in popular games such as League of Legends and Overwatch. 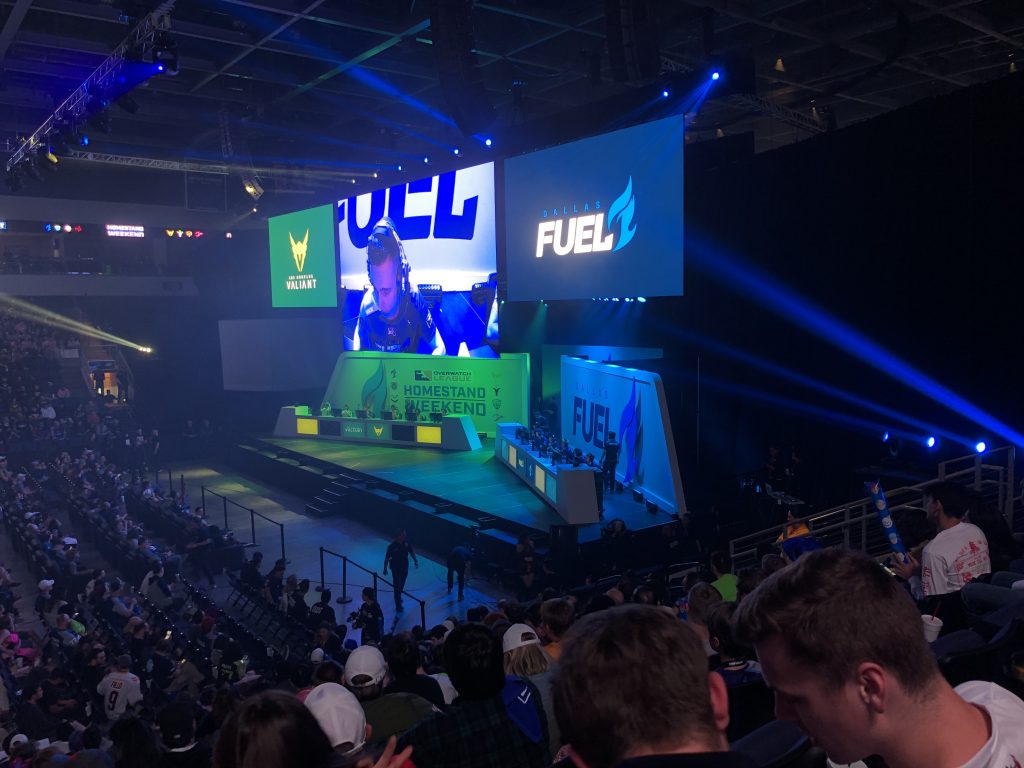 Grace Ramsey, team manager of the Pepperdine eSports Program, spoke about the incredible opportunity that the tournament was for the Pepperdine program.

“The fact that we were invited as a school that has not participated in any official collegiate eSports seasons is a really big deal,” Ramsey said. “Obviously, the word has already gotten out there that we’re here and hitting the ground running.”

eSports is a growing billion-dollar industry, according to CNN.

“380 million people worldwide will watch eSports this year … tournaments and other events can attract viewing crowds that rival most traditional professional sports outings,” the CNN article states. “The 2017 League of Legends World Championship drew more than 80 million viewers, making it one of the most popular eSports competitions ever.” 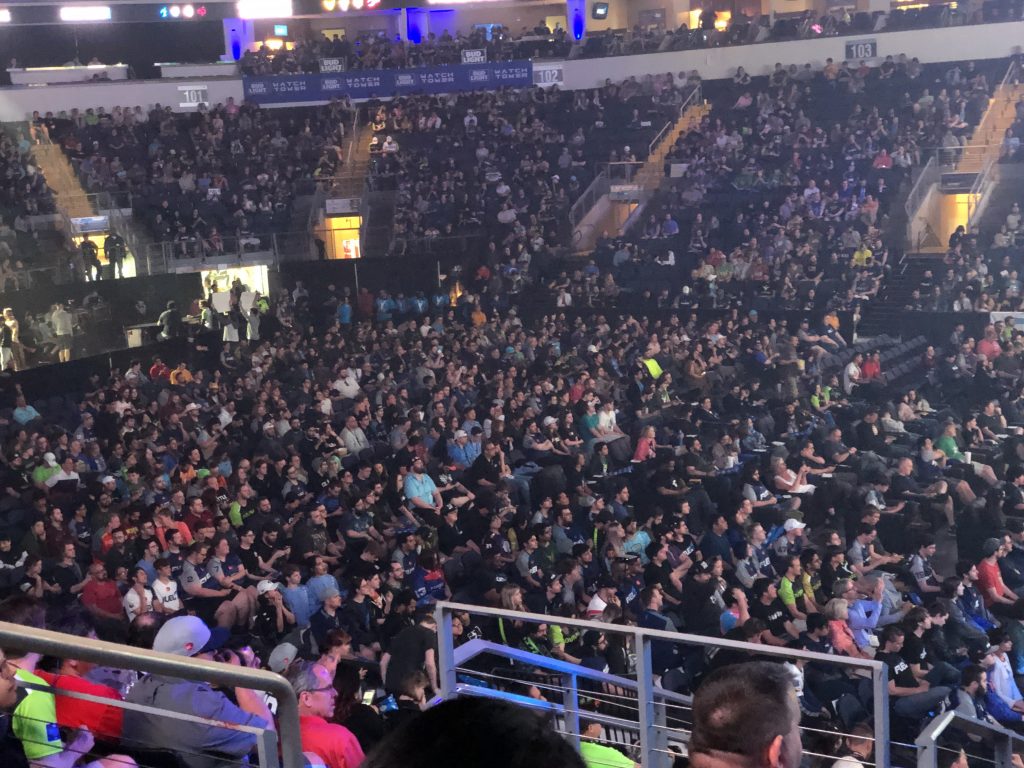 A crowd at a professional Overwatch tournament. Photo Courtesy of Grace Ramsey.

The eSports industry has been gaining more and more traction, and with that, colleges are starting to get involved.

“Only seven colleges had varsity eSports programs in July of 2016. By 2018, there were 63 institutions,” according to GameDesigning.

With the industry on the rise, colleges are starting to see the opportunities eSports teams can bring. Colleges have recognized that with this growing industry comes job opportunities. Being on a formal team provides college students practice and experience with the industry, Ramsey said.

“eSports is a billion-dollar industry in this country, and collegiate eSports is only getting bigger and bigger,” Ramsey pointed out. “Even if people aren’t going to become pro eSport athletes in the future, there’s job opportunities in this field. There are experiences that being a collegiate player can help you with if you want to go into this field.”

Throughout the past two months, Pepperdine had the opportunity to compete in an exclusive collegiate tournament hosted by the LA Valiant, competing against Orange Coast College on Aug. 2. A team of Pepperdine students volunteered and remotely prepared for the tournament.

In mid-June, the LA Valiant approached Pepperdine and invited them to apply for the tournament.

The Overwatch tournament accepted eight schools, with Pepperdine pushing out two other universities to claim spot number eight. For the month leading up to the tournament, voting took place to decide which schools would be invited to compete. The tournament asked individuals interested to share a link with their school, friends and family in which people could then vote for their school to be accepted into the tournament.

Robb Bolton, director of Campus Recreation, talked about the heavy interest in eSports from Pepperdine students.

A meeting about eSports was hosted this past spring that attracted an overload of students causing there to be standing room only, Bolton said. They compiled an interest list of over 100 students.

“Since I’ve been the director, that’s by far the most [interest in] anything we’ve ever put out there,” Bolton said. “I think the most before [eSports] for any trip or sport or fitness event was probably in the 20s, so to have 100 students reply was pretty significant.”

Pepperdine has been receiving a large amount of support for their eSports program.

Bolton said big names in the eSports industry, such as Twitch, ULT and Collegiate Starleague, have already reached out to Pepperdine and expressed their interest in talking to students and helping with program development. Pepperdine’s president, Jim Gash, is fully supportive of an eSports program, Bolton said.

“We have already had a meeting with President Gash, and he has expressed his interest in eSports,” Bolton said. “He’s already seen the potential with this industry, and I know he’s already been meeting with some of the big leaders in the gaming world because that was something on his agenda already. He gets it, that this is something that’s a great opportunity for students.” 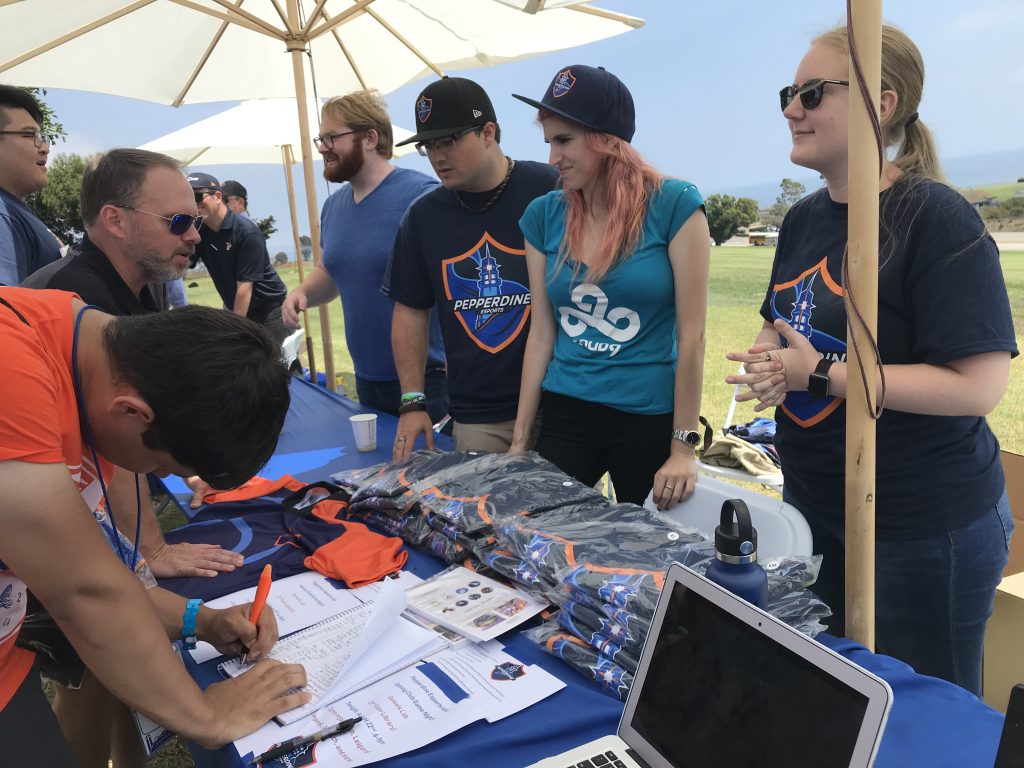 The Pepperdine eSports tabled at the Waves Expo during NSO. Photo by Gabrielle Mathys

If you are interested in getting involved with the eSports program, there will be a meeting Sept. 5, with tryouts happening in mid-September. Whether you are interested in playing competitively or just want to experience eSports on an intramural team, contact Robb Bolton by email: robb.bolton@pepperdine.edu.

There is also the Pepperdine Gaming Club, which Ramsey said will focus on “more casual gaming and career development.” If you are interested, contact the president, Adrian Tull, by email: adrian.tull@pepperdine.edu.