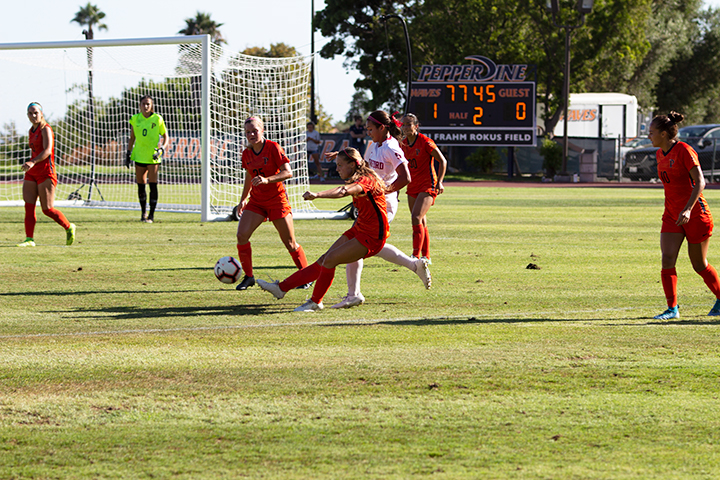 Three straight losses, dropping out of the national rankings, playing two top-five teams in a one week span while stuck in a ninth-place tie with the University of Pacific in the West Coast Conference Standings.

These were the circumstances that the Pepperdine Women’s Soccer team faced heading into their matchup on Friday versus the #2-ranked Stanford Cardinal. They had the entire week to prepare for the matchup after last Friday’s loss versus Cal Poly.

Stanford is the third top 25 opponent that Pepperdine has played this season. Their first two outings showed promise but were ultimately unsuccessful, as they tied Texas A&M and lost to Vanderbilt.

With a 1-3-1 record heading into the game, Stanford was a must-win game for the Waves if they expect to make a push at Brigham Young University and Gonzaga atop the WCC. Pepperdine executed on both sides of the ball, secured their biggest win of the season and handed Stanford their first regular season loss since Aug. 25, 2017.

After what appeared to be a minor injury for redshirt sophomore Zoe Clevely versus Vanderbilt, the goalkeeper found out on Wednesday that she will be out for the season with a torn ACL.

Redshirt freshman Kinsey Ehmann, the only other goalie on the roster, has taken over the position since the injury and recorded 13 saves in the first three games. Friday’s game was Ehmann’s biggest test so far, and she rose to the challenge in just her fourth career game.

Sophomore center-back Trinity Watson was ecstatic about Ehmann’s performance and raved about her work ethic.

“I was so stoked about her performance today,” Watson said. “She’s really coming from the bench with our starting goalie getting hurt. But she works so hard in practice, and it showed on the field today. Her performance was amazing.”

To start the game, the Waves offense had their most aggressive start this season as they constantly created passing lanes and challenged the opponent’s side of the field. In the third minute, junior midfielder Joelle Anderson ran through the Cardinal defense and attempted the first shot of the contest. The ball sailed left and the game remained scoreless.

In the 19th minute, Anderson set the ball down for a corner kick on the left side of the field. She lofted the ball high in the air and a group of Stanford and Pepperdine players crowded beneath it. From behind the group, sophomore defender Izzy Nelson accelerated to the ball and leaped into the air for a powerful header that hit the back of the net. It’s Nelson’s first goal of the season and the third of her career.

“I spun out of the crowd and when I saw the ball,” Nelson said. “It was perfect and I finished it. We’ve been working on it in practice a lot, but we haven’t turned it into points yet, so I guess it was time that we did. We had God on our side today.”

The Pepperdine defense avoided disaster in the 23rd minute. As Stanford was driving down the field, Ehmann charged a loose ball that was between two Cardinal players. She slipped to the ground, and Stanford set up what looked to be an easy shot before Watson stepped in front of the goal and blocked the ball.

Stanford continued offensive pressure with long, set-up passes but was called for offside in the 24th, 28th and 31st minute. In the first half alone, Stanford had eight shot attempts but could not get past the hands of Ehmann.

To start the second half, the Waves dropped many players onto their side of the field to focus on defense and keeping the lead. From the 51st to 54th minute, Stanford attempted five of their whopping 12 corner kicks of the day, and each attempt was dismantled by the Waves defense.

In the 64th minute, Ehmann went up for another save and collided with Stanford’s junior forward Madison Haley. It drew a yellow card for Haley, while Ehmann was injured on the play and was down for a few minutes before being assisted by the training staff and staying in the game.

Only two minutes later, Ehmann had another save followed by Nelson deflecting two shots of her own on back-to-back plays. As the game clock started to approach minute 90, Stanford continued to fire shots and generate corner kicks, but the Waves defense kept the shutout. The Cardinal finished the game with a total of 22 shots and nine that were on goal.

The defensive game plan for Pepperdine was well executed. Watson attributed the result to the work that the team put in during practice.

“We talked about their offense a lot in practice and worked on our defensive shape,” Watson said. “We looked at film this entire week too, so I think that benefited us in the long run.”

Ehmann had a remarkable performance and finished with six saves, the most by a Pepperdine goalkeeper since Brielle Preece’s 10 save outing versus BYU last October. Ehmann was happy with her team’s progress at this stage of the season.

“I’m just so proud of my team and excited of what’s to come after this,” Ehmann said. “All of our work has paid off when you look at a game like this, and we’re going to continue to work and build on it.”

Ward was pleased with his team’s performance and is ready to improve.

“I’m immensely proud of the girls,” Ward said. “With the results in the last three games, our performances haven’t been bad, just the result. And so today the soccer gods smiled upon us. I told the players that this Stanford group is maybe the best team I’ve ever seen. This game showed that no matter who you’re playing, If your team has a spirit and can fight, anything is possible.”

This victory was 11 months after Pepperdine stunned the #2 in the country, Santa Clara. Head Coach Tim Ward is confident that no matter the ranking, his team can compete with anybody.

“I think in all sports Pepperdine has this sense of David versus Goliath,” Ward said. “That’s one of the many reasons I’ve never left this place, because I love the mentality and think we can play against the best teams in the country. I understand that we also have strengths and weaknesses as a University, but we get up for these games. But it will mean nothing if we don’t build on it.”