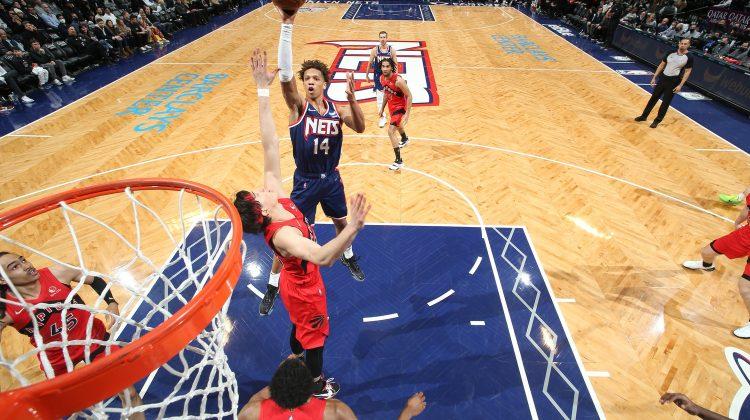 Kessler Edwards (No. 14) shoots a floater against the Toronto Raptors on Feb. 28 in the Barclay’s Center. The Brooklyn Nets selected Edwards as the No. 44 overall pick in the 2021 NBA Draft. Photos courtesy of Nathaniel S. Butler via Getty Images

In his journey from role player at Pepperdine Men’s Basketball program to a rising star with the Brooklyn Nets, Kessler Edwards turned himself into a household name.

Edwards is the first player from Pepperdine to be drafted in the NBA since Alex Acker in 2005.

Edwards holds a plethora of records in the program. In the all-time scoring list, Edwards is No. 30, amassing a total of 1,247 points. He is also fifth in blocked shots with 127 blocks, seventh in free-throw percentage at 78%, and eighth in 3-pointers with 148.

Edwards gained a West Coast Conference All-Freshman team status, acquired the WCC All-Second team honors and made the All-WCC first team as a junior as well as the National Association of Basketball Coaches All-District second team. Edwards was also the MVP of the College Basketball Invitational in 2021.

In the seventh installment of the “Where are they now?” series featuring former Pepperdine student-athletes, Edwards talked to the Graphic about his NBA experience as a rookie. Previous installments covered Stacy Davis, Kelley Larsen, Quincy McAfree, Dave Wieczorek, Maya Sherif and Deahna Kraft.

It was the night of the NBA Draft, where the lives of 60 basketball players would be changed forever. Multiple mock-drafts had Edwards drafted as a second-round pick.

With his eyes glued to the TV and family and friends surrounding him, Edwards said the excitement in the room built once he saw his name on the next 10 possible draft picks available.

“I remember when the second round started, I got a little nervous,” Edwards said. “And then I found out like right before my name was called that I’m going to be picked by the [Brooklyn] Nets. So, it was kind of crazy.”

Edwards said he decided to go through the draft process while keeping his NCAA eligibility. When Edwards declared to the NBA Draft as a junior, he still had two years of eligibility left, but he realized that he was ready and could make an impact in the NBA.

“As we got feedback while he had been working out for [NBA teams], he felt like he had improved to a point where he’d be ready to make the [NBA],” Men’s Basketball Head Coach Lorenzo Romar said. “And for him, it didn’t matter at that point if he were a first-rounder. Once he said that, I supported him 100%. But, I was honest with him during the process.”

Edwards said he carries a lot of lessons from Pepperdine –– including what Romar preached during practice.

“I think the way that we played on the court [at Pepperdine] really helping me in the NBA,” Edwards said. “Just knowing [the NBA plays] at a fast-pace, getting on me about my intensity and how hard I play. That’s how you got to be every night in NBA, so I’m thankful for that.”

Romar, Edwards said, kept in contact with him throughout the pre-draft process. The biggest advice Romar provided was to stay ready and stay positive.

Learning How to Stay Ready

Edwards signed a two-way contract with the Nets, meaning he can only play in 50 games before the team decides on converting him to a regular rookie contract.

“It was really a blessing getting to play in the G League when I first had gotten called up before I started getting real minutes,” Edwards said. “I was feeling very confident, playing a lot of minutes in the G League –– being one of the main players on that team. So, I think it transferred right over. I mean, that really helped me a lot.”

As a two-way player, Edwards split time in the G League –– the NBA’s minor league –– with the Long Island Nets. There, he averaged 15.6 points, 8.3 rebounds and 0.9 assists while playing 34 minutes per game.

Edwards said it was tough being a two-way player at the start of the season.

“That was really just the name of the whole year –– just staying ready,” Edwards said. “And even now, I’m not playing as much, [it’s] the same thing. Just staying ready, that’s part of being a professional.”

“When you look at how he’s improved each year, this is just what he’s done,” Romar said. “This is consistent with what he’s done since he was a freshman. He made another jump so it would only make sense.”

Those close to Edwards described him as having a low maintenance personality, and Edwards said his personality could be attributed to his parents and how his parents taught him growing up.

“He didn’t get too down on himself, nor did he get too high,” Romar said. “He scored 37 points in the game and he would be the same if he had scored zero [points]. He was a very even keel, even-tempered young man. I think that helped him to when he got his opportunity in the NBA.”

“He was the guy who would come in every practice that just dominated and he wouldn’t really even say much,” Yoon said. “He plays his own game, he’s a really humble guy. So, everything that he did, it was so crazy to see him do what he did at that level, but still carry the whole attitude.”

Yoon said because Edwards was so quiet, anything he did was so unexpected.

“When we’re on the road and we’re all eating together, he’s just cracking some jokes,” Yoon said. “And he’s bouncing off of the other guy’s jokes too.”

Adjusting to the NBA

With the Nets having NBA talents like Kevin Durant and Kyrie Irving, Edwards said it’s been a real blessing to play alongside the two.

“I don’t think I’ve really appreciated the greatness that I’m playing with right now until it’s over,” Edwards said. “But, they just gave me a lot of confidence. I mean, they look for me when I’m out on the court with them, and they just kept telling me to shoot the ball and be confident and they have confidence in me. So, that’s really all I need.”

Though Edwards was a career 39% 3-point shooter at Pepperdine, Edwards said adjusting to the NBA line was a struggle at first, but it’s about getting more power into his shot, getting his set-point higher and just relaxing it.

“He had [his set-point] up in front of a little bit throughout his career, but he was good shooter,” Romar said. “But now, with the longer distance over the NBA three-point line, I think [the change] helped him.”

Scouts classified Edwards as a 3-and-D wing. In the modern NBA, the need for 3-and-D wings are at an all-time high because they can stretch the floor with their shooting while defending the top perimeter players.

Romar said Edward’s ability to put the ball on the floor, making a play off the dribble and working on his footwork were all things he emphasized.

With Edwards being one of the younger players on the team, Edwards said Blake Griffin, James Johnson and Patty Mills have been the people he turned to for advice.

When the Nets got struck with a COVID-19 outbreak in Dec. 2021, Edwards said that’s when he got his first real extended minutes.

Edwards played in his first NBA game versus the Golden State Warriors on Nov. 16, 2021. Even though that game was a blowout, Edwards said he was itching to get in the game after sitting on the bench.

“Just being aggressive [once I got in] because I had also been playing in the G-League too, so I was ready,” Edwards said.

Moving forward in the NBA

If he could describe his NBA experience so far in one word, Edwards said it would be a “movie.”

“Not knowing it was gonna happen as far individually, how much playing time I’ll get,” Edwards said. “And then, just the lifestyle, like all the traveling, and especially with the playoffs coming up.”

Edwards said his main goal in his rookie year is to win a championship with the Nets.

“I mean, with all the talent we have, that’s been our goal since training camp,” Edwards said. “So, whatever I can do, whether that’s cheering off the bench, or once I get in, just bring in all the energy that I can bring. But, really, just wanting to championship with the team. It’s all I’ve got for my rookie year.”