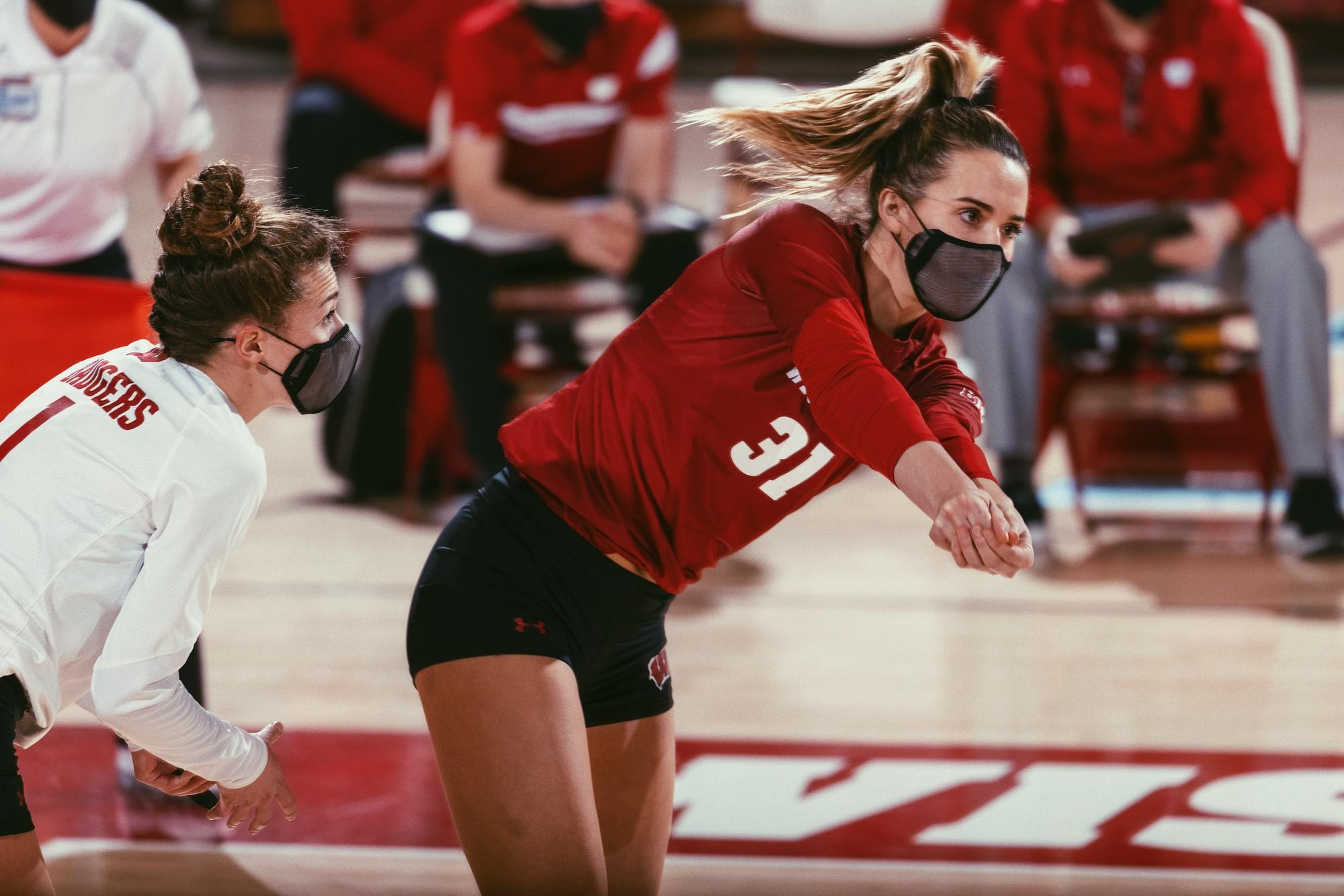 Alumna Deahna Kraft leans for a dig in an April 1 victory over Michigan. Kraft transferred to the University of Wisconsin-Madison and is sixth on team with 41 digs.

Deahna Kraft spent three seasons on the sand for Pepperdine Beach Volleyball, but she knew her heart was somewhere else.

After her stay at Pepperdine, Kraft decided to use her extra year of eligibility due to the COVID-19 shutdown to transfer to her dream school, the University of Wisconsin-Madison, and finish her career on the hardwood instead of the sand. The Badgers are ranked No. 1 in the country heading into the NCAA Women’s Volleyball Tournament, and Kraft is excited to be a key contributor on the team.

“Whenever I get these gut feelings, I have to listen to them,” Kraft said. “Wisconsin has an insane culture, they’re historically awesome and I’ve watched them since high school. I felt like I wanted to be around greatness.”

Kraft, originally an outside hitter from Garfield High School in Seattle, Wash., she always entertained the possibility of playing for the Badgers. Wisconsin was the top school she looked into during her junior and senior year of high school. Nonetheless, Kraft only had the option of joining the team as a walk-on.

It wasn’t until Kraft traveled to Malibu when she decided playing beach instead of indoor was a possibility.

“The first time I went to Pepperdine, it was really just for fun,” Kraft said. “It was for a beach camp even though I wanted to play indoor like most girls. By the third day, I was on the recruitment court with tons of girls that were already committed to Pepperdine.”

Although the camp was a valuable experience, Kraft said she didn’t consider Pepperdine until she returned home.

“Four months later when they sent me a letter, I took a visit there and loved it,” Kraft said. The place was down to earth and people can just go to the beach every day. I mean, if you get offered and can go play at the beach every day under one of the best coaching staff in the world, you would almost be dumb to say no.”

Kraft played in 97 career matches for the Waves. She helped Pepperdine finish second in the USA Collegiate Beach Championships as a junior and paired with Brook Bauer. In her senior season, and paired with Bauer once more, the duo went 3-4 before the season paused due to COVID-19.

Before her final season as a Wave was underway, Kraft said she felt a drive to blaze a trail elsewhere.

“I took an official visit to Wisconsin in November before the season,” Kraft said. “I talked about transferring going back to my sophomore year so I always kind of flirted with it.”

Kraft said Brittany Howard, a 2017 beach volleyball alumna and one of her closest friends, also pushed her to go through with transferring to her dream school.

“It was Brittany that made it a point to say ‘Deahna, you’ve talked about wanting to go to Wisconsin your whole life. Just reach out and then see what happens.”

Kraft said she initially was uneasy about looking at Wisconsin while she was at Pepperdine.

“It almost felt like I was cheating on the Pepperdine team,” Kraft said. “It completely wasn’t my intention but it was before the season and you’re reaching out to coaches thinking about your future. It was a little weird.”

Kraft said she fell in love with the school during her visit and told Head Coach Kelly Sheffield she wanted to transfer. She attributes the emphasis on the sport and competitive environment as some of the reasons she moved from Malibu to Madison.

“The environment is just different here,” Kraft said. “A part of me just knew. They have some of the best players in the nation and I knew they’d bring the best out of me. On my visit I went to a game where they were playing Nebraska and the energy was electric.”

Kraft joined a Badgers team that’s no stranger to making noise in the tournament. Wisconsin was the runner-up in both the 2013 and 2019 seasons. The roster boasts incredible depth, including eight seniors, five badgers AVCA All-Regional sections and seven All-Conference selections.

Kraft said depth is easily the strength on the team.

“I couldn’t imagine our team being more deep,” Kraft said. “We have a huge roster, everyone can play and everyone pushes each other. In practice, our A-team will scrimmage our B-team. The B-team could probably beat a handful of teams in the Big Ten they’re so good.

Wisconsin dismantled every team they played this season. Ten of their 13 matches were 3-0 sweeps, and the teams that didn’t get swept never stole more than one set. Wisconsin’s total set record this year is an astounding 39-3.

Kraft said the time off added to the importance of practice.

“It’s been so tough with the stops and cancelations,” Kraft said. “But we’re still in a good spot because of our crazy competitive practices. Everyone is a weapon on our team, and our offense is hard to stop even if we did have to take two breaks. It speaks to our ballers on the front row.”

Wisconsin has a first-round bye in the tournament and is set to play the winner of Bowling Green and Weber State. Pepperdine Women’s Volleyball received a tournament bid as well. Pepperdine beat UMBC and will play Baylor Thursday.

our tournament victories for Pepperdine and three for Wisconsin would result in the teams squaring off in the Final Four.

“That would be so fun,” Kraft said. “I’ve rooted for them this whole season and it’s cool they got in the tournament. If we play each other, game on.”