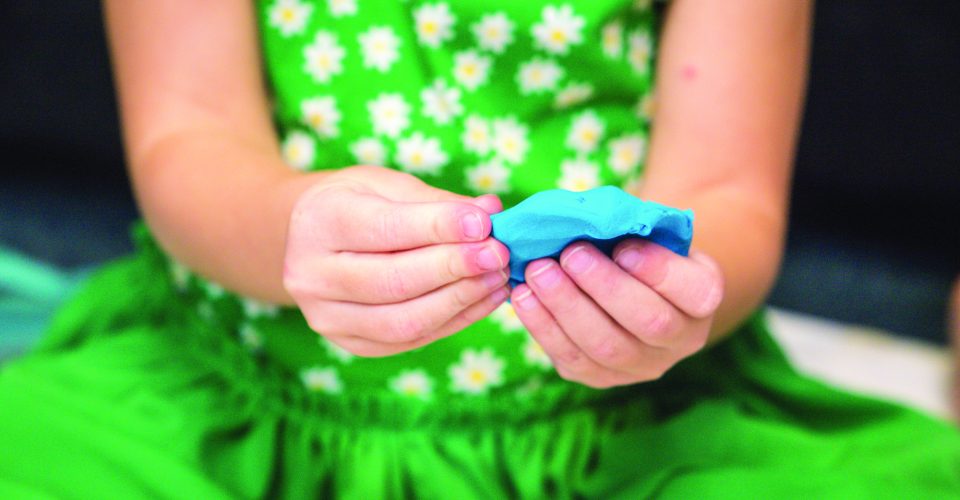 Dan Hain is a veteran who has struggled with substance abuse and homelessness.

“I started with those adult coloring books and thought, ‘What a stress reliever,’” Hain said. “Art has kept me busy but it has also been very helpful. It has calmed down my anxiety.”

Art therapy is on the rise as a creative, remedial technique used in clinics, schools and institutions all across the United States. The practice is based on the belief that the creative process helps people develop interpersonal skills, manage behavior, reduce stress, increase self-esteem and achieve insight, according to the American Art Therapy Association.

Traditional art instructors may not have the goal of therapy in mind when teaching but several find that art’s therapeutic abilities benefit their students.

A sense of normalcy may be lost for veterans returning from duty. Combat, loss and stress are all factors during wartime that can lead to post-traumatic stress disorder (PTSD), which affects approximately 11 to 20 percent of soldiers in a given year, according to the U.S. Department of Veterans Affairs (VA). Trauma can lead to a number of other obstacles, such as anxiety, depression, drug abuse and homelessness.

For the past two years, artist David McDonald has volunteered to teach art at the VA in Los Angeles for two groups of veterans: those recovering from substance abuse and those 55 years or older who have previously been homeless with mental and/or physical disabilities. McDonald said therapy is a byproduct, rather than a goal, of his art classes. He focuses more on providing the veterans with a peaceful space where they feel comfortable.

“It’s been really interesting to watch how art can open up barriers,” McDonald said. “You sit down and you’re drawing, just sitting with somebody. It’s a very quiet and intimate situation. Art is something the veterans can bond over and form a little community.”

There are no boundaries to McDonald’s art class. He quickly discovered the veterans were not interested in his teaching, so he created the class to be a workshop where they have access to a variety of materials such as paints, drawing tools and clay.

“I think they like the freedom,” McDonald said. “As one guy once said to me, ‘Our entire career in the military, we are told what to do — we’re under orders all the time. I come here and you don’t tell me what to do, and I really appreciate that. You respect me enough to let me figure it out.’”

With this creative freedom, McDonald has seen the veterans create art for a range of purposes.

“There are people who just want to make something pretty to have in their room,” McDonald said. “Meanwhile, I’ve had a lot of them who are not allowed to see their children, and they’ll oftentimes do drawings or paintings for them. They can then mail those art pieces over to their children.”

Hain attends McDonald’s class along with art classes at the Brentwood Art Center. He said both the art teachers and the community of veterans have been very welcoming.

“They all are very friendly,” Hain said. “For the veterans who haven’t tried art yet, I tell them, ‘Do art. You’ll love it.’”

Everyone is able to pursue art. Ty Pownall, Pepperdine fine arts professor and artist, worked with United Cerebral Palsy (UCP) between 2008 and 2012, teaching art to clients with unique cognitive and physical abilities.

Cerebral palsy (CP) is a developmental disorder of movement or posture caused by damage that occurs in the developing brain, according to the Mayo Clinic. CP’s effect varies but can be both cognitive and physical. Pownall said he treated all of the clients as artists, regardless of their CP.

“My goal was always to not think of it as therapy,” Pownall said. “I wanted to really treat them as independent, professional artists, and that was the way I found benefited them the most.”

For some of Pownall’s clients, art was not only a creative outlet but also a way to communicate. Pownall said there were a lot of cases in which nonverbal clients were able to use art to express what they were feeling.

On the other end, those whose CP affected their physical abilities were also able to express themselves through art.

“I worked with a client — really bright, funny guy — but he could pretty much only control his foot,” Pownall said. “He painted this landscape that had a fully developed foreground, middle ground and mountains in the back. He painted the whole thing with just his foot. He seemed so happy and proud.”

The clients also have the opportunity to submit their work to the Washington Reid Gallery in Culver City. Pownall said while he was working at UCP, he would do a lot of two-person shows consisting of one of the UCP clients and a professional artist in the LA area. It was a way to connect the art community with the CP community.

During Pownall’s time at UCP, he said he saw an improvement in the overall mood and energy of some of the clients.

“They seemed happier and more excited to be there,” Pownall said. “I don’t know what that was all attributed to but art is fun and it’s powerful. I think if you can set up a situation for anyone to feel creative, to feel like they have the power to make what they want, to feel like they can fail and it’s OK, then there is a benefit that is going to come from that — no matter who it is for.”

The Counseling Center created an expressive arts group in Spring 2018. The goal of the group was to give students a space to be creative through self-discovery and connection with others, Counselor Sparkle Greenhaw said.

“I felt this would be a fun and creative way to do some counseling in a different sort of manner,” Greenhaw said. “There are so many other counseling centers across the country that do this type of work and I wanted to bring that here.”

The group meets weekly and encourages new students to attend whenever they please. In general, Greenhaw said the main reason a majority of students seek counseling is because of stress and anxiety.

“[Anxiety is] the number one reason,” Greenhaw said. “But people can come in for an unlimited list of other things such as depression, eating disorders, grief, relationships, addiction, homesickness, career questions. The Counseling Center is able to provide support and that’s also true with any of the groups we do.”

The group session starts with a general topic which changes from week to week. Topics have ranged from mindfulness to boundaries to courage. With directional freedom, students are given various mediums such as watercolor, collage and colored pencils to create their art.

“It’s not an art class,” Greenhaw said. “Unlike an art class where you might be looking at the final product, we really are looking at the process. It also forms connections. … Anyone who returns to a group over and over is going to find that they can take more risks, go deeper, be more vulnerable and even be able to reflect back on where they were when they first started the group.”

Art is an element of the everyday curriculum for students and teachers at Mariposa Elementary School. Sixth grade teacher Gina Armfield started implementing art in the classroom in Fall 2018 and is currently leading the Arts Integration Institute for the Las Virgenes School District. Armfield said bringing art into the classroom is fundamental to overall improvement.

“The truth is we teach to test,” Armfield said. “With that, we’ve lost creativity. I think it’s important to have balance and be able to express yourself. I think our educational system has become very myopic in its thinking, and we need to have a balance.”

Armfield uses exercises such as sketching, watercolor and stream of consciousness writing to get the students thinking creatively. Although the projects are not intended to be therapy, Armfield said students with trauma can benefit from releasing emotion through these projects.

“Kids are really struggling, and they’re having a hard time with their emotions,” Armfield said. “The whole idea of using art is to express the things they’re holding in.”

Sixth-grader Juliane Mangold said her favorite part about art in Armfield’s class is the ability it gives her to express herself.

“It helps me with my emotions,” Juliane said. “When I am going through something, art helps to let it out and pay attention to something else.” 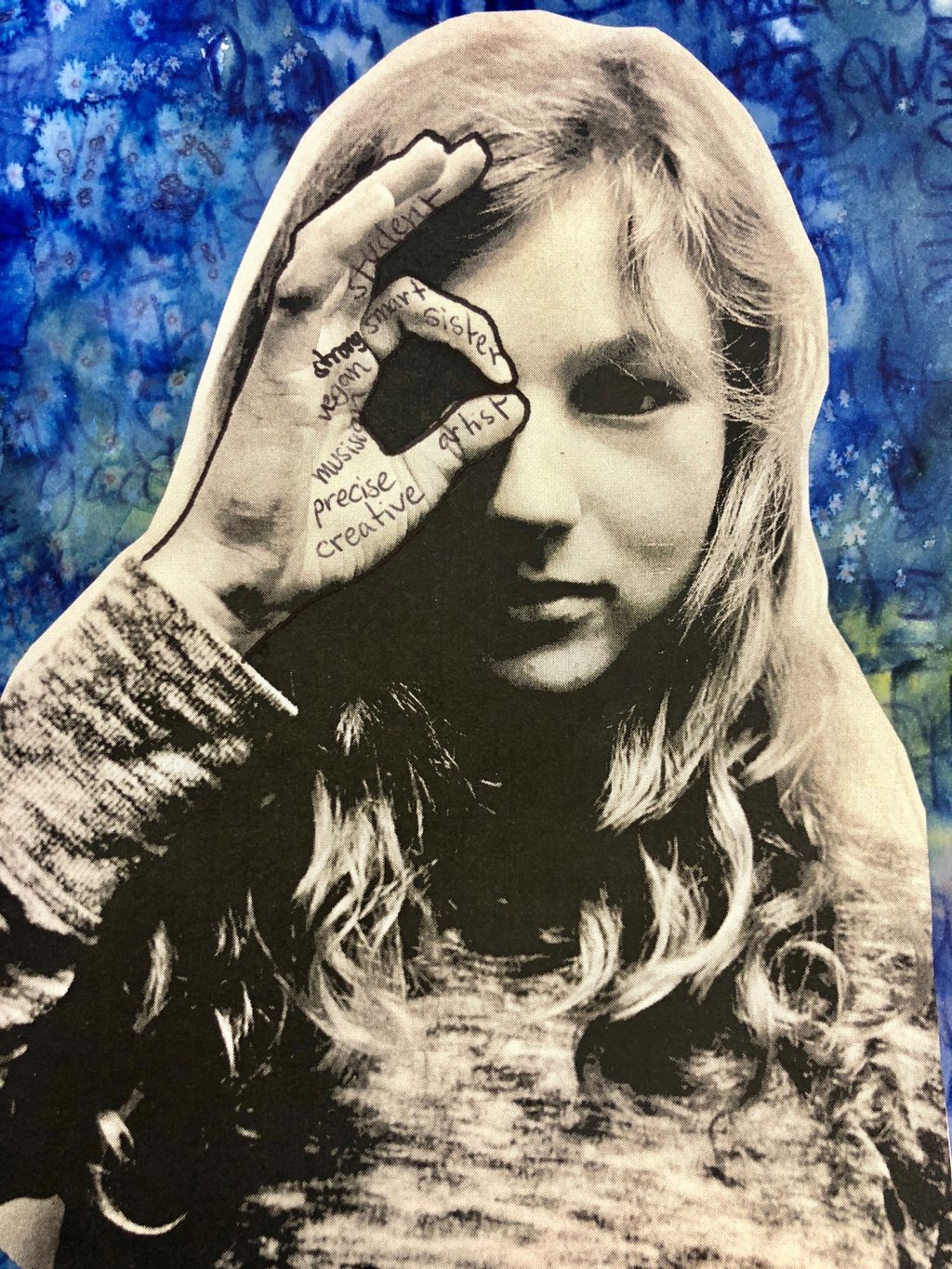 Juliane’s artwork is a self portrait that mixes collage, painting and words. Photo courtesy of Gina Armfield.

Within the past school year, Armfield said she has seen a shift in attitude toward school among her students.

“With my sixth graders, they say to me, ‘I never really wanted to go to school before, and now I look forward to school,’” Armfield said. “They come to school early because they want to paint or draw.”

Isaac Starko, a sixth-grader at Mariposa, said he used to be shy about showing his face. But school made him feel more safe and comfortable, so he used the metaphor of “covering his face” in his artwork. 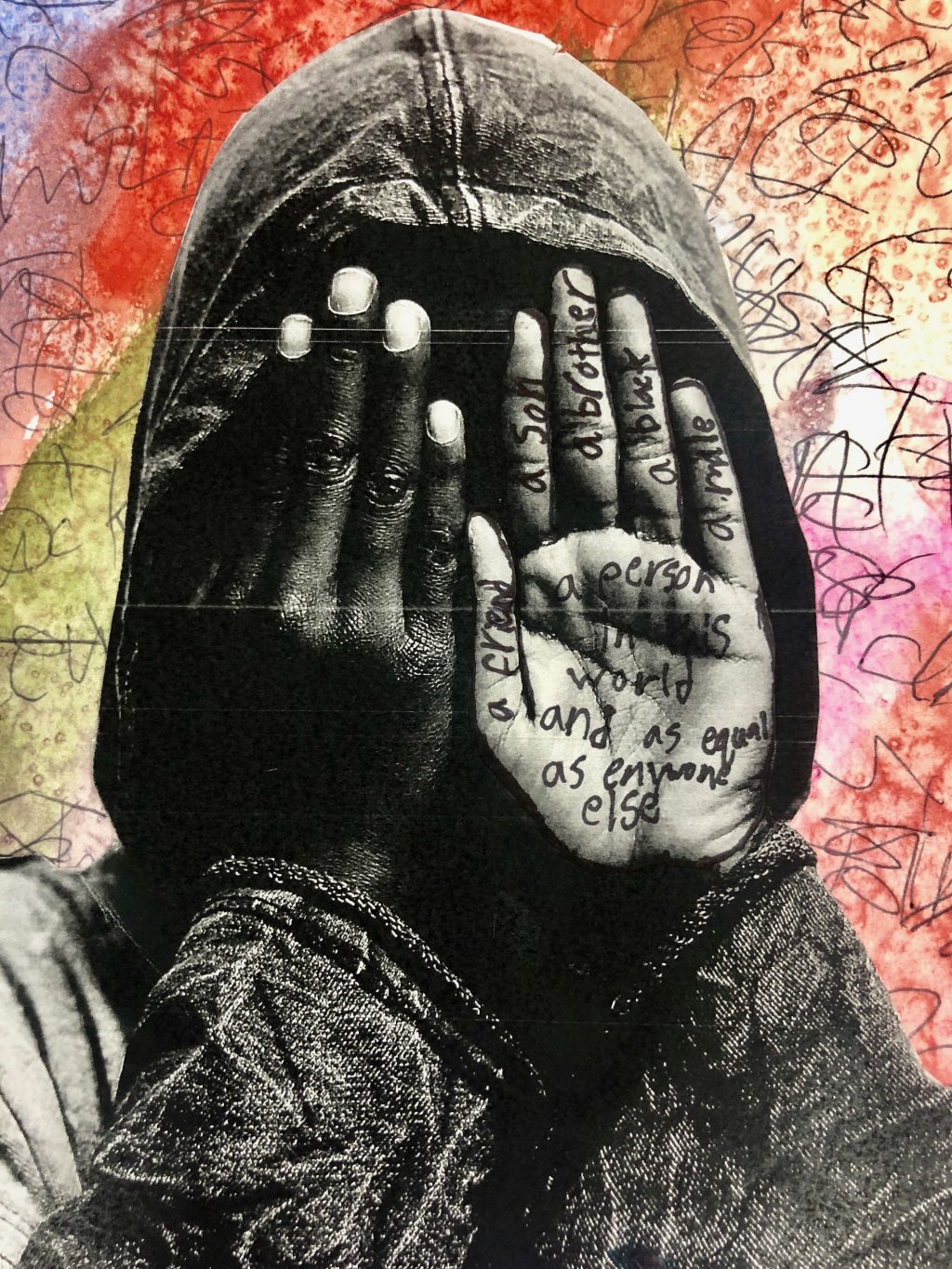 “When I make art, it makes me feel happy inside,” Issac said. “I have always been an artist.”

The Malibu Senior Center offers a full calendar of artistic opportunities for the community members. These activities range from dance classes to creative writing to art classes. Once a month, a teacher from Art Trek — a nonprofit art program — comes to the center to teach an art project. 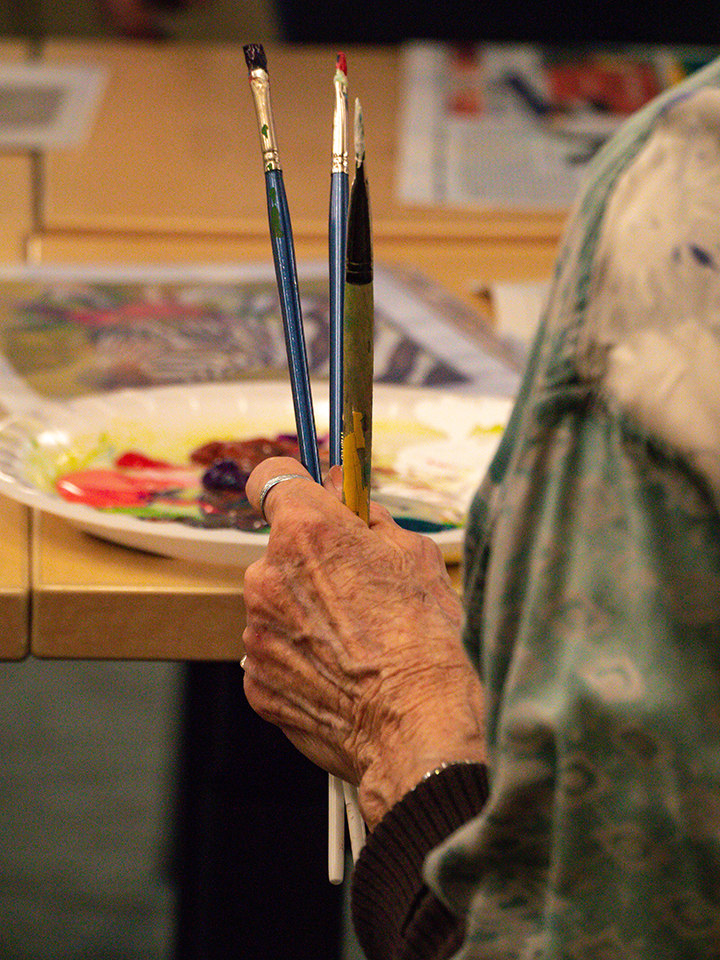 Art Trek instructor Lorelle Patterson led an acrylic painting project this past February. Seniors had a choice of various images of animals in nature to mimic onto their own canvases. Unlike the other art groups, Patterson’s class is more structured, teaching her students how to improve their artistic skills.

“It may be therapy on some levels,” Patterson said. “But it really teaches people how to grow as humans and grow in their community. Art serves a big purpose.”

After a warm-up to practice the shapes of their example image, the seniors dove into their paintings. Malibu resident and artist Shelley Kramer is a regular at the monthly Art Trek event. She said art has played an important role in her life.

“It has helped me during stressful situations,” Kramer said. “Art has made me more patient.” 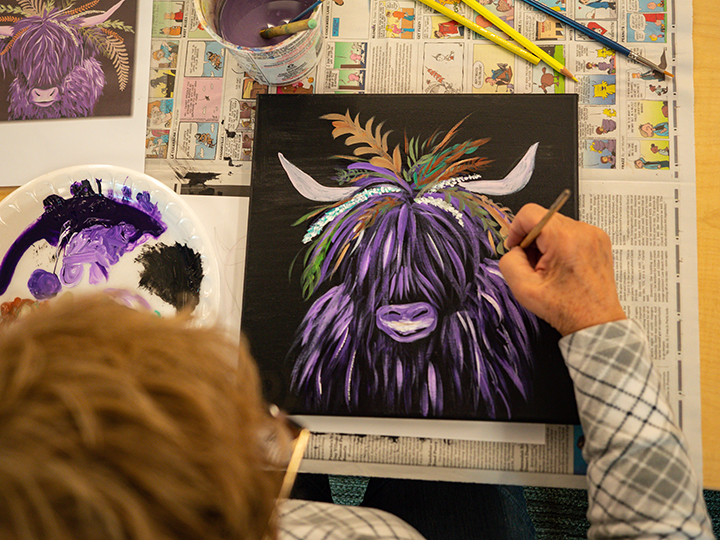 First-time attendee Joan Lesser-Beda shared how she fell out of art until recently.

“I stopped painting in the 1980s,” Lesser-Beda said. “Then a month before we had the fires, something came over me, and I got a bunch of canvases. I painted about six or seven canvases of the landscape around me. I had this fear it would be gone.”

Lesser-Beda said she and her husband Henry only grabbed some clothes and her paintings when they evacuated. When they returned home after the fire, Joan and Henry Lesser-Beda continued to paint. 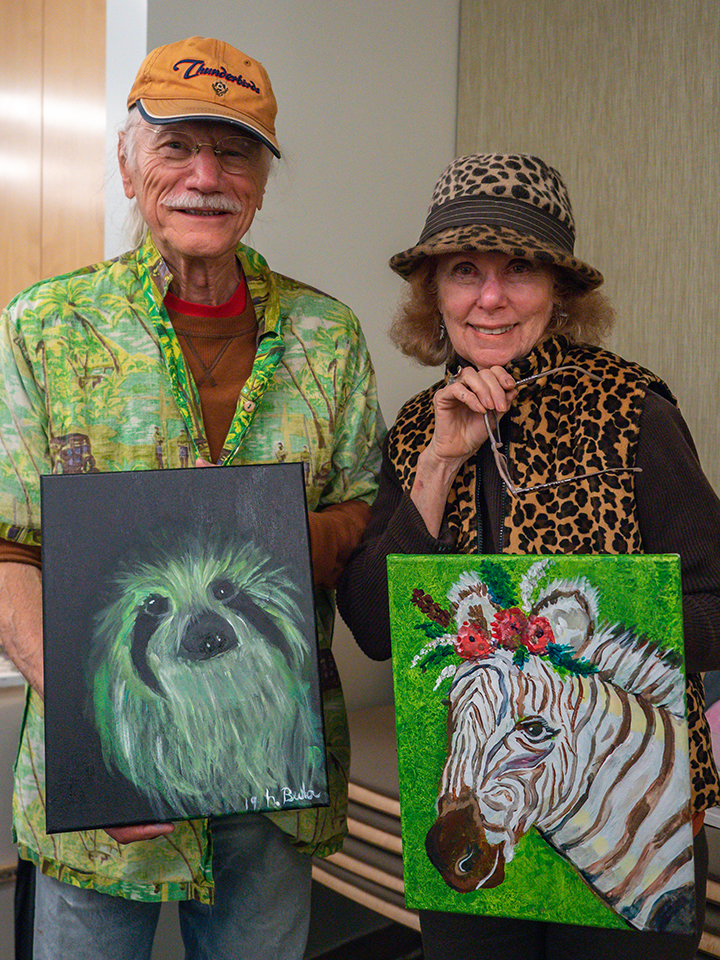 “Painting is definitely therapeutic; it’s an escape,” Joan Lesser-Beda said. “Everyone should get into it. It doesn’t matter at what age they start. My husband is over 80 with no previous experience and here he is painting.”

Henry Lesser-Beda painted a detailed sloth during his first Art Trek class. He said he always wanted to paint but was afraid to start. After support from his wife, he picked up the brush. 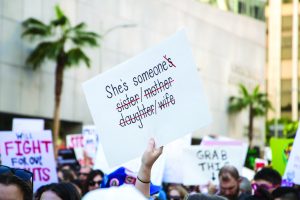 Photo by Milan LoiaconoArt is a living part of history. When one thinks back to landmark social movements, art has always...
Copyright 2013 Jupiter Premium Magazine Theme
Back to top