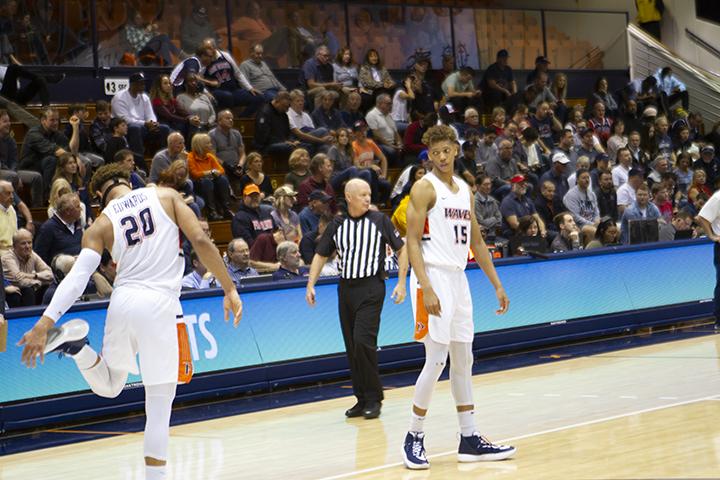 Pepperdine Men’s Basketball went 1–1 at home this week versus two conference opponents. On Thursday, the team commanded much of the game versus Loyola Marymount 75–67. And on Saturday, Pepperdine’s potent offense was not enough to beat the Saint Mary’s Gaels.

Junior guards Colbey Ross and Skylar Chavez led the way versus LMU with 20 and 15 points, respectively.

It was the third straight game that Chavez finished in double figures. He said he has been more aggressive in looking for his shot.

“It’s mostly just finding my spots,” Chavez said. “I know my role on the team is to try and get open so that my teammates can find me. So it’s mostly just trying to space myself out. And then once I see the first few go in, I get my rhythm going, and then next one’s going to fall.”

“We’re just trying to get better and better and better,” Romar said. “This conference season is still young — we’re in the first third of it. But I thought our guys did a good job tonight of defending and playing together.”

After a one-day turnaround, Pepperdine tipped off versus the 15–4 Saint Mary’s Gaels who are No. 4 in West Coast Conference standings. The Gaels exploded offensively in the early stage. They jumped out to a 38–21 lead with six minutes left in the first half.

“Once we let them get in a rhythm, we dug ourselves into a hole,” Chavez said. “They came out and were shooting 70% from the field and had 30 points in 10 minutes. We can’t do that on the defensive end.”

Despite the slow start, the Waves responded with a 14–2 run led by Chavez, Ross and sophomore forward Kessler Edwards, who accounted for 11 of those points. The St. Mary’s lead shrank to as little as five before a three-pointer by St. Mary’s guard Tanner Krebs to close the half. The Gaels led 43–35.

Ross elaborated on how the team adjusted to St. Mary’s scoring barrage.

“They’re a great shooting team — one of the best in the country,” Ross said. “We started to lock in, and with a couple of minutes left in the half, we held them to a lot less points and defended the three better.”

Ross said he came into the game with his typical mindset.

“I didn’t approach the game any different,” Ross said. “It’s just another game to me — he’s a great player — but regardless, I just try and go out, play as hard as I can and get the win for my team.”

Pepperdine’s offense ran out of gas late in the game, and St. Mary’s won 78–69. Romar said he knows what to address on the defensive side of the ball.

“That’s a good team we just played,” Romar said. “We allowed them to get to the rim too much and too easily. We have to do a better job of keeping people in front of us.”

With the loss, Pepperdine falls back below .500 and sit at 9-10, 2-3 in conference. They travel next to Santa Clara on Thursday, Jan. 23 to play the Broncos.

“They’re a really good team,” Chavez said. “Defensively, they get after it, so we’re going to have to move the ball a lot, space the floor and execute the best way we can.”