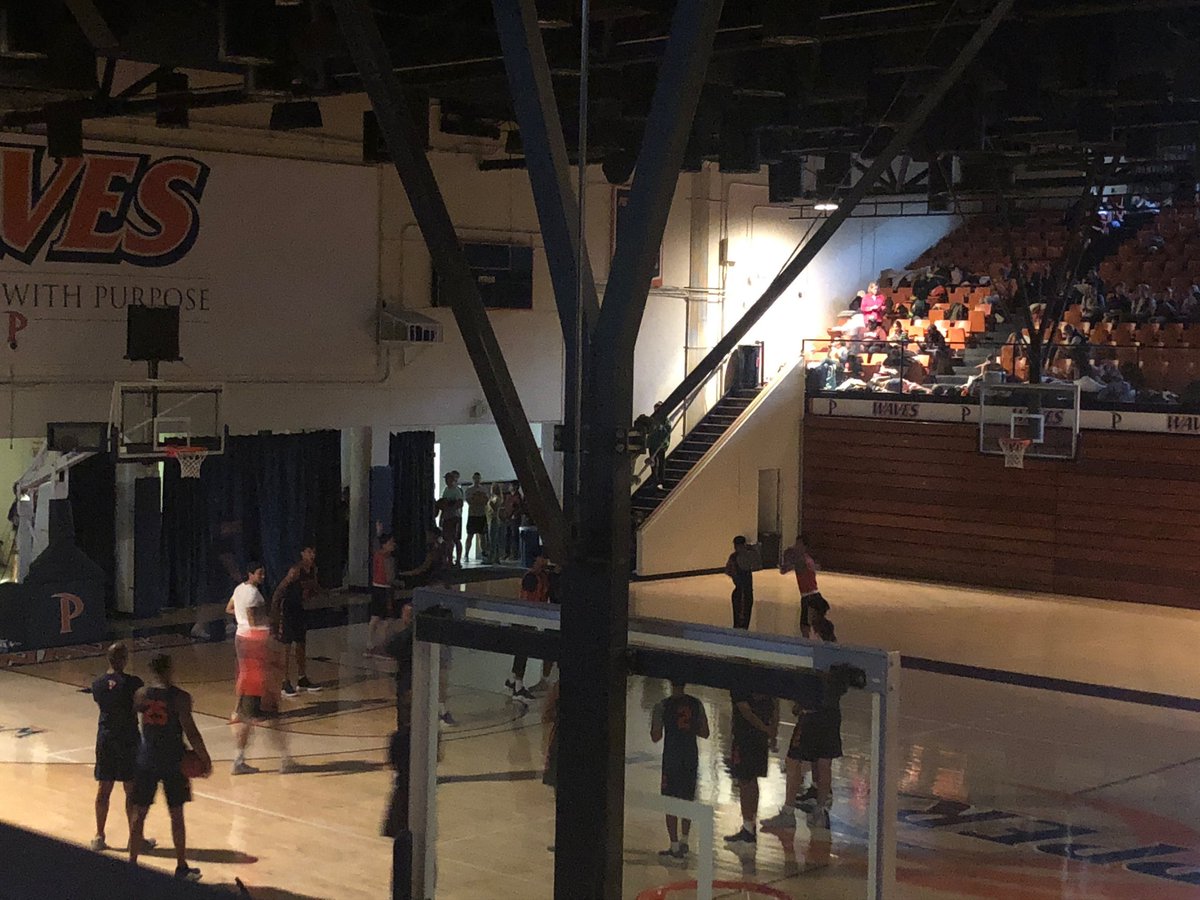 The physical and emotional aftermath of the Borderline Shooting and the Woolsey Fire affected all aspects of Pepperdine life, including the various athletic teams.

The threat of the fire on the Malibu campus and the resulting smoke gave fall and winter sports teams no choice but to reschedule, relocate or cancel games and practices.

Despite the losses suffered by the Pepperdine community, including Athletics, players and coaches said the teams overcame chaotic circumstances.

“We’ve got a lot of great people that focus on relationships and focus on who we are as people,” Women’s Volleyball Head Coach Scott Wong said. “To see [that response] after this is no surprise. It’s something that is so right on with Pepperdine; it’s not about where we are, but who we are.”

The Women’s Volleyball team was in the heat of the West Coast Conference season with their eyes on the postseason when the Woolsey Fire began, so they attempted to remain focused.

The Waves practiced Nov. 8 with emotions running high from the Borderline Shooting. As the fire struck the Malibu campus and the team evacuated, their scheduled Nov. 10 game against Loyola Marymount University was postponed to the following week.

“How can you perform athletically when the emotions are that high?” Wong said. “There were a lot of people on our team that were processing things, and we all process things differently.”

The team came together for practice Nov. 12 in San Clemente while uncertainty swirled about whether or not homes had been lost, Wong said. They had a team breakfast that included prayer and working to move on.

“Things that came to light are ‘What do we have?’ ‘What are we thankful for?'” Wong said. “We have our health, we’re all safe. In the big picture of things, we didn’t lose much.”

Ultimately, none of the women or coaches lost their homes in the fire, and the team responded in a big way. They defeated Gonzaga, Portland and Loyola Marymount in succession in four days, despite the former two games being played at UCLA’s Wooden Center rather than Firestone Fieldhouse.

The team defeated the University of San Diego 3-2 Tuesday on the road in their final regular season game for their fifth consecutive victory. The Waves finished the regular season 21-8 overall and in second place in the WCC, and after a few days off for the Thanksgiving holiday, they will return to practice Saturday.

The Waves are making a strong case for an NCAA tournament appearance, and will find out if they have received an at-large bid on the NCAA Division 1 Selection Show the evening of Nov. 25.

Waves Water Polo was also forced to complete the most important part of its season away from home. The team’s home Golden Coast Conference matchup against UC Santa Barbara scheduled for Nov. 10 was cancelled, and the entire GCC Tournament was moved away from Malibu.

Pepperdine was originally slated to host the conference tournament at Raleigh Runnels Memorial Pool, but Pepperdine Athletics and the GCC moved it to Lindgren Aquatics Center at Long Beach State University.

The Waves, seeded sixth in the country and second in the conference, fell at the hands of the Long Beach State 49ers 5-4 in the GCC semifinals before defeating the UC Irvine Anteaters 10-8 to finish third in the conference.

The team finished its season with a record of 16-11 and ranked number eight nationally.

The Men’s Basketball team kicked off its season Nov. 7 with a big 100-66 victory over Division II Cal State Dominguez Hills, but were unable to enjoy the victory for long.

“We’ve got a good, talented group here,” redshirt senior guard Eric Cooper. Jr. said after the win. “We just have to build on that and hopefully have a great season.”

After the win, the team practiced Nov. 8 and Nov. 9 but the Woolsey Fire forced Pepperdine to postpone their scheduled home contest against Cal State Northridge until Dec. 3. The Nov. 9 practice actually took place in Firestone Fieldhouse while students were sheltering in the building from the fire and the power was out.

Yeah they are practicing with only the emergency lights on pic.twitter.com/tNerkUWUyD

The Waves have been mostly on the road since then, as they fell 88-80 at the hands of the Northern Colorado Bears in Greeley, Colorado on Nov. 13 before traveling to Nassau, Bahamas for the Islands of the Bahamas Showcase. The team won two of three games in the Bahamas to finish third in the tournament.

Head Coach Lorenzo Romar, back for his second stint at Pepperdine, confirmed on Twitter that his home was not harmed in the fire “by the grace of God.”

Catch the Waves when classes resume as they play Nov. 26 against Idaho State University at Firestone Fieldhouse.

However, unlike the men’s team, the women have not played since. The Woolsey Fire caused Pepperdine Athletics to postpone the Waves’ Nov. 16 home game against UC Irvine to a later date.

The entire team attended the Women’s Volleyball game Nov. 15 against Gonzaga to support their fellow Waves. They will now travel to San Luis Obispo for the ShareSLO Holiday Beach Classic, and they open the tournament Friday against Sacramento State.

Fourteen members of the Cross Country teams traveled to Sacramento Nov. 8 for their final race of the season, the NCAA West Regional. Most of the runners never had a chance to return to the Malibu campus.

Both teams raced on Nov. 9, wearing white ribbons on their uniforms to honor Alaina Housley and the Pepperdine community. The team sheltered in Bakersfield that night and watched the fires approach campus on television before scattering with friends and family in the following days.

“I felt so powerless, like there was nothing really I could do,” said Heath, the team’s captain and only senior. “[We could] just hope and pray, but we couldn’t really change anything.” 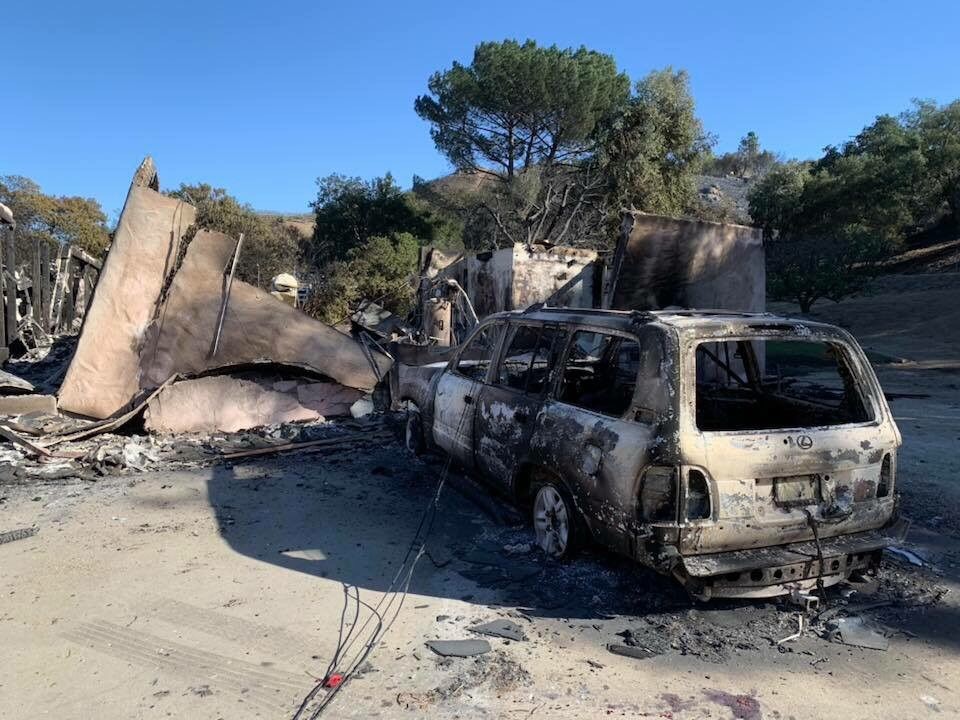 Pepperdine is offering the four runners a place on campus for the remainder of the 2018-19 school year.

“I was pretty impressed by how many donors came to support Pepperdine,” Heath said. “They raised so much money and stuff so fast. It was nice that a bunch of people from Pepperdine contacted me . . . it was really meaningful.”

The Swim and Dive teams practiced the morning of Nov. 8 as normal but not that afternoon.

“We did not practice Thursday afternoon because of the shooting,” Head Coach Joe Spahn said. “We attended the athlete memorial service for Alaina and then our team did a team dinner that night just for team bonding.”

The team was not able to practice on Nov. 9 or throughout the extended Thanksgiving break as most of the student-athletes went home.

Spahn confirmed that a few of the women lost their homes in the Woolsey Fire and that his own house suffered smoke and ash damage.

The teams will return to practice when classes resume and compete Nov. 30 at San Diego State University.

The Men’s Volleyball team also practiced the morning of Nov. 8 as many of the players were initially hearing details about the Borderline Shooting. The next day, the team received the evacuation notice before they could begin practice in Firestone Fieldhouse.

“Friday [Nov. 9] we came down for practice and the power was out,” sophomore setter Ben Hancock said.

Since the evacuation of Malibu, the team has not been able to practice as the players have traveled home.

Head Coach David Hunt said that Head Coach Emeritus Marv Dunphy successfully protected and saved his Malibu home from the Woolsey Fire. None of the other players or coaches lost homes or cars either.

“Our team is resilient, finding comfort in the company of each other,” Hunt wrote in an email. “Pepperdine, as it has been for years, was a safe haven in the midst of chaos and uncertainty in the outside world.”

Waves Men’s Volleyball will practice throughout fall semester finals and a few days into Christmas break to make up for lost time. The team will then return to practice Dec. 26 ahead of their season-opening game Dec. 30 against Princeton at home.

Men’s Tennis practiced Nov. 8 as usual, but first-year Head Coach Adam Schaechterle was forced to evacuate with his family that night and the team followed suit the next day.

Several of the athletes are international students, so traveling home was no easy task, but all of the players are either home for the break or staying with friends in Southern California.

“Our feeling as a group is we’re really grateful that everyone is OK and healthy, and we’re really appreciative of the efforts of people that were able to save campus,” Schaechterle said.

The team has not practiced since that Thursday but players have been hitting and training as they’ve been able to do so. The homes of Schaechterle and all players that lived off campus are safe.

The men do not have another tournament until their collegiate season begins Jan. 11, 2019 at the National Collegiate Tennis Classic in La Quinta, California.

Neither tennis team is currently in their collegiate seasons, but both play some fall tournaments and were unable to continue practice on the Malibu campus. The women’s team continued practicing throughout the impromptu break, finding courts outside of Malibu on which to play and practicing without their coaches on hand.

Most of the women do not play again until the collegiate season opens in January with the Freeman Memorial Tournament at the University of Nevada Las Vegas.

However, junior Ashley Lahey and sophomore Evgeniya Levashova depart Nov. 26 for the Master’U BNP Paribas tournament in Grenoble, France, which will be their final tournament of the fall season, Lahey wrote in a text message.

Pepperdine opened the Pepperdine Crisis Response Fund, or Pepperdine Strong Fund, to support those affected by the Borderline Shooting and the Woolsey Fire. The fund raised over $300,000 for the Pepperdine community in its first week of existence.

Coaches from the Baseball, Beach Volleyball, Basketball and Water Polo teams could not be reached for comment.