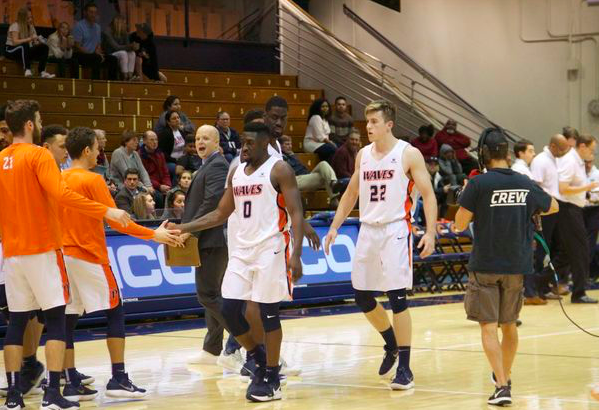 With two more weeks left in the regular season, Pepperdine Men’s Basketball played a home-road series against two of the top three teams in the West Coast Conference: BYU on Thursday, Feb. 15 and No. 9 Gonzaga on Saturday, Feb. 17.

The Waves hoped to flip their fortunes and get back into the win column on Thursday night. Pepperdine hosted BYU, a team they defeated four straight times at home, as the Cougars had not won a game in Firestone Fieldhouse since 2013.

However, the Waves lost to BYU in overtime, 75-70 on Thursday night, despite a tremendous late rally led by freshman guard Colbey Ross. Freshman guard Trae Berhow had 12 points and six rebounds to lead the Waves.

“We played tough all throughout the game and we just need to continue finishing the season strong,” Berhow said. “We just have to keep that intensity for all 48 minutes of the game.”

In the first half, the Waves and Cougars exchanged the lead early on, but BYU took the lead with a 15-6 run to go up 26-17. Pepperdine kept the game close before Ross came up with two huge three-pointers to give the Waves a 36-34 lead into the half,

In the second half, the Waves continued to hold a slim lead early in the half, but both teams went into the final stretch with seven lead changes and four ties. With BYU up 64-62 with 16 seconds left on the game clock, Ross came up with a clutch layup to tie the score and the Waves got a defensive stop to push the game into overtime tied at 64.

In the first overtime period … junior forward Darnell Dunn gave the Waves their first lead in overtime, but BYU rallied with a late 7-2 run in the final two minutes to go up 73-70. The Waves had multiple opportunities to tie the score, but the Cougars come out on top, 75-70

“We did a great job of sticking to our game plan, but we didn’t execute on the little things down the stretch,” Ross said. “We have to tune it up and keep that same hunger and fight as we approach the final week of the season.”

In the second game against No. 9 Gonzaga, the Waves held their own for much of the game, but the Bulldogs pulled away late for an 81-67 victory on Saturday night.

Ross scored a game-high 21 points on 8-for-14 shooting and added six assists. Berhow had nine points and seven rebounds.

“Our focus coming into this game was to stay within striking distance,” Ross said. “Gonzaga is one of the top teams in the country, but we wanted to show our game and not back down to the challenge.”

Coming out of halftime, the Bulldogs extended the lead back to 14, 54-40, but the Waves answered with an 11-3 run capped by a dunk by senior forward Matthew Atewe to make it 60-56 with 9:30 remaining. Senior guard Amadi Udenyi found Berhow for a lay-up to cut it to 66-64, but Gonzaga finished the game with an 11-0 run to put the game out of reach.

Pepperdine visits Saint Mary’s on Thursday, Feb. 22 at 7 p.m. before playing the final home game of the season against Portland on Saturday, Feb. 24 at 5 p.m.