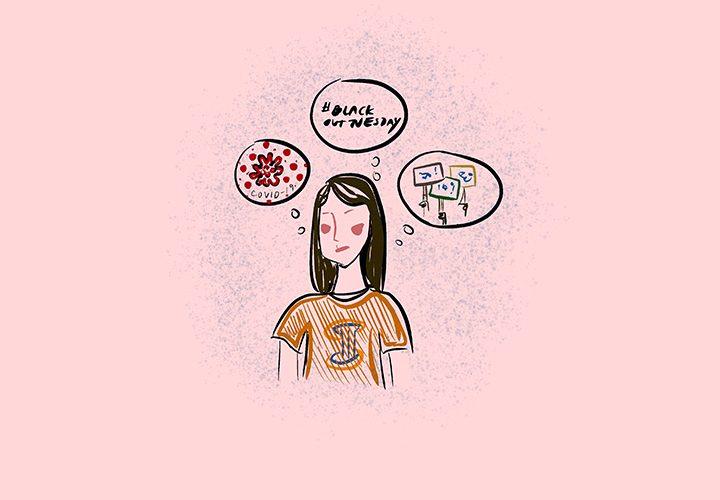 In a year that has witnessed a global pandemic and a demand for racial justice, the meaning of Greek life is changing as Greek organizations reconcile their online existence and navigate a political and social climate that won’t tolerate racist practices any longer.

This year, sororities and fraternities at the University have addressed the circumstances brought on by COVID-19 as they also wrestle with the racial reckoning taking place in the United States. The changing social and political climate within the country begs the question: What does it mean to be a member of Greek life in 2020?

“The important part of Sigma Chi is not social, it’s not mixers, it’s the character of the members who compose it,” said Sigma Chi Consul senior Antonio Gutierrez. “Everyone in our fraternity is responsible for cultivating a better culture.” 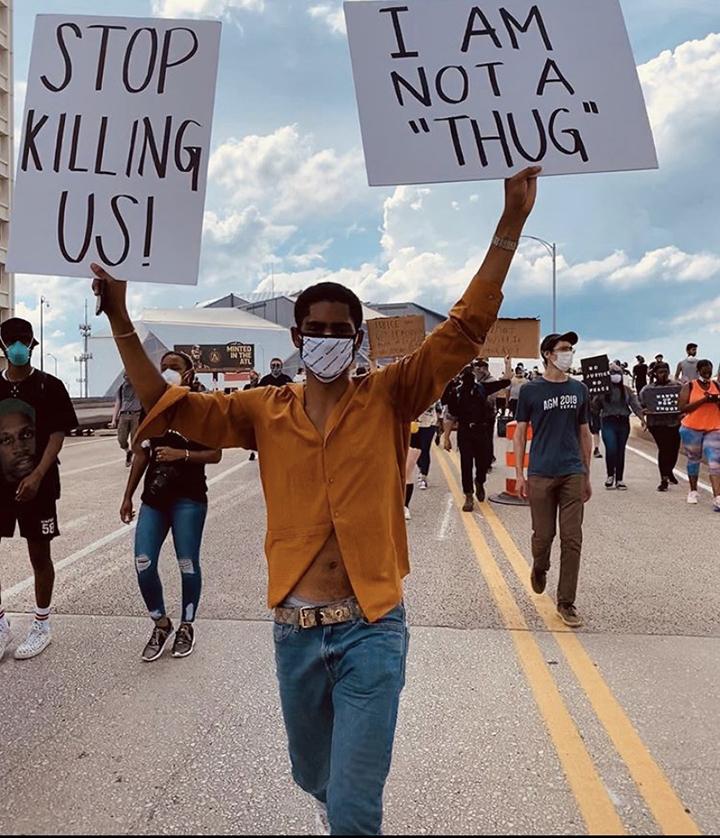 Paraschiv said she encouraged active members to ask questions that delved beneath the surface level so they could have the chance to get to know the PNMs as much as possible over Zoom.

Senior Ruffina Silva-Garcia, the chair for Tri Delta’s Diversity, Equity and Inclusion Committee, said initially, she didn’t expect many women to sign up for virtual Recruitment. Silva-Garcia said her expectations were exceeded when she learned that 232 women would be participating. 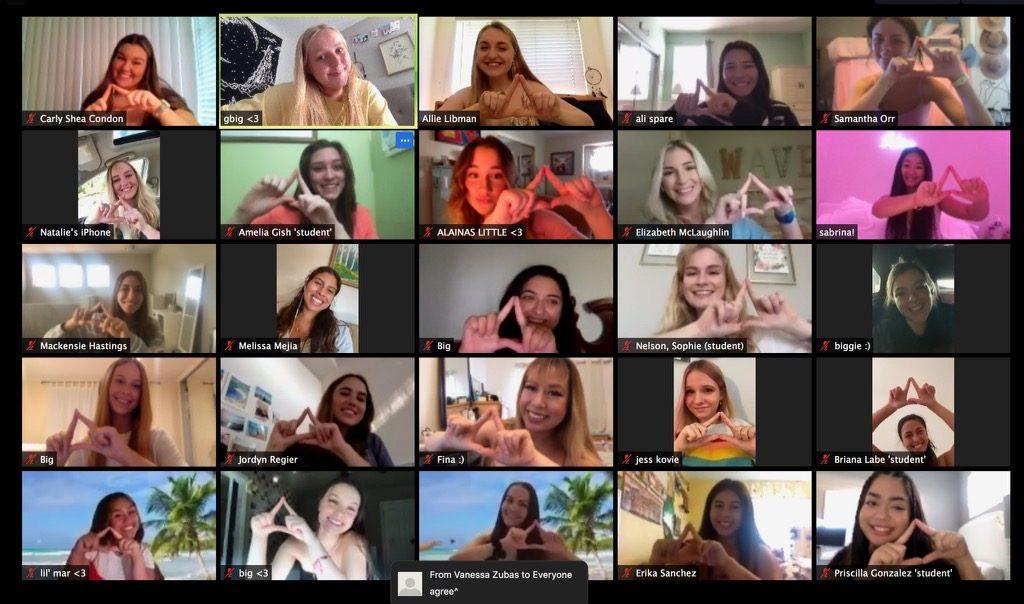 “We did have a lot of people sign up; they wanted that sense of community, even though we were in a virtual environment,” Silva-Garcia said. “And I think that they did find it because they’re meeting new people. Although it’s not in person, they have a group to come back to on campus.”

Paraschiv said while Alpha Phi members are still very enthusiastic about their relationships with each other and the new members, existing in a virtual space makes it difficult for the chapter to get excited about official sorority activities, like philanthropy events that have had to be moved to an online format.

Eight members of Alpha Phi chose to drop out or take inactive status in the sorority this semester because they didn’t want to pay to participate in online events, Paraschiv said.

“But people are happy to meet new people and do activities with sisters outside of the more official events that we have to do,” Paraschiv said.

Delta Sigma Pi (DSP) President Elizabeth Hyde said her fraternity’s existence online can pose unique advantages that may not have happened if DSP had the opportunity to gather in person. DSP also held online Recruitment this fall.

Hyde said the online space creates more opportunities for guest speakers who would not usually be able to travel to Malibu to speak to the chapter. Hyde also said the chapter has not forgotten about its philanthropic endeavors and is still working on partnering with Alpha Kappa Psi and other DSP chapters in the region to create initiatives that members can participate in wherever they are.

“We’re keeping our high expectations, high standards and our high fun and enthusiasm and brotherhood while also adapting to the online environment,” Hyde said.

Many fraternities at Pepperdine decided to postpone their Recruitment to the spring 2021 semester. Junior Josh Leow, VP of Recruitment and Marketing for IFC, said the decision to delay Recruitment was essentially unanimous among fraternity presidents and IFC.

“I kind of wanted to see how the girls’ virtual Recruitment goes so we can take notes from it, learn from it, because ultimately when we’re planning the spring recruitment, there’s a good chance that it will also probably have to be online,” Leow said. “We’ve just got to be ready for whatever; prepare for the worst, but hope for the best.”

NPHC fraternities and sororities typically have Recruitment in the spring but are still awaiting guidance from their national headquarters on how to move forward with membership. 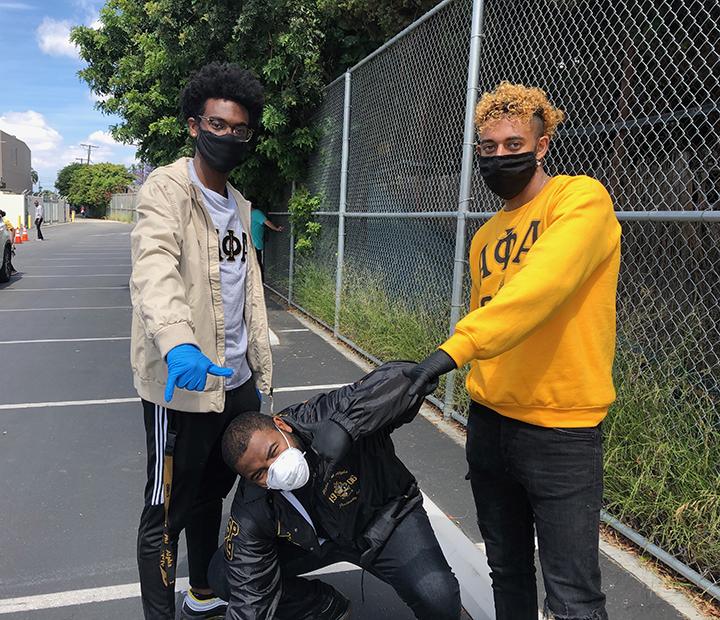 Senior Justus Bell, alumnus Matthew Paster and sophomore Kenzi Bishara of Alpha Phi Alpha pose for a photo during a food drive May 30. Bishara is the president of the fraternity. Photo courtesy of Kenzi Bishara

“Our intake process, it’s centered around to help men enter into the fraternity on the caliber of an Alpha level man,” Sophomore Kenzi Bishara, president of Alpha Phi Alpha, said. “That’s just very difficult to do when you’re not in person, face to face.”

Shortly after the murder of George Floyd, nationwide protests broke out asserting the importance of Black lives. These instances led to the creation of the Instagram account @BlackatPepperdine, which amplifies the voices of Black students at Pepperdine, both past and present, and provides them the space to share their experiences within the Pepperdine community.

Several posts from @BlackatPepperdine highlight the racism experienced by Black students within Greek life. The posts detail instances of blackface, derogatory slang used both in person and on social media, unfair treatment from Greek executive boards and several microaggressions.

As of Oct. 2, Sigma Chi has at least seven posts written about it on @BlackatPepperdine describing incidents of racist practices and language. Gutierrez said the posts disturbed him and made him question the values of the fraternity as a whole.

“I was disgusted and taken aback by reading those things, but I think on a deeper level, I felt really kind of foolish,” Gutierrez said. “I just didn’t know that members of my fraternity could have had it in them to do things like this.”

Gutierrez said he is usually concerned with Sigma Chi’s image on campus, but in this instance, damage control and saving face never came to mind.

“Usually, I would expect myself to be like, ‘Oh, this looks terrible for us’ — that didn’t even pop into my head,” Gutierrez said. “Usually I’m so consumed by the reputation of Sigma Chi, and this is the first time where I felt personally offended by the fact that those were things that members of my community had done.”

Bishara said he was not at all surprised by the posts about Pepperdine and Greek life that appear on @BlackatPepperdine.

“I don’t need to see an Instagram page for someone to tell me that Pepperdine is a racist place,” Bishara said. “I’m very grateful that that page has come about because it’s definitely shown a lot of people what the reality is for Black students at Pepperdine.”

At Pepperdine, Bishara said he has felt racism of varying degrees since he arrived on campus his first year. A Regents’ Scholar living in Miller House, Bishara was the only Black man in the entire house, and said students asked him if he was living there because there was an extra bed available. Bishara said he was also often asked if he was on the basketball team.

“The underlying assumption is I can’t make my way into a prestigious academic school from my academic merit,” Bishara said. “It has to be, you know, off of something that Black people do.”

On Oct. 5, Pepperdine Panhellenic released a statement on diversity, equity and inclusion acknowledging racial injustices within Panhellenic and around the country, condemning racism and outlining their plan of action for fall 2020.

Many Greek groups at Pepperdine have made changes to their executive structures to address racist practices that may exist within their own chapters. Sigma Chi revamped its Empowerment Committee to address institutional racism, Alpha Phi created a Diversity Chair position and Tri Delta elected a Diversity, Equity and Inclusion Committee.

Senior Alpha Phi Diversity Chair Puneet Mann said she will work to educate the chapter on how to combat racism by inviting guest speakers and hosting panels in chapter meetings to educate members on how to be an ally to people of color.

Mann said she has experienced many microaggressions at Pepperdine, so it is important to her that members of Alpha Phi understand microaggressions, why they are offensive and how they can avoid making them toward people of color.

“I think it comes from a good intention, but I think it’s important that we teach a lot of our members who might not understand how things can be hurtful so we can prevent similar situations from happening in the future,” Mann said.

Paraschiv said she is urging members to recognize the importance of the @BlackatPepperdine page and acknowledge their own privilege as they do so.

“I wanted to make sure that people understood that it may not happen to you, but it doesn’t mean that it’s not happening,” Paraschiv said.

Gutierrez said before @BlackatPepperdine came about, there were no rules or practices in the Sigma Chi bylaws for how to address racism within the chapter.

After he saw the Instagram posts, Gutierrez said he and the chapter’s executive committee conducted full judicial reviews for each individual post and tried to gather as much information as possible before confronting members accused of racist actions.

“The first thing we did was add in a zero-tolerance policy,” Gutierrez said. “Any member is subject to an immediate judicial review board for being implicated in an incident like this, which immediately puts their membership at stake.”

How to be an Ally

Gutierrez said he believes one of the first steps to be an ally to the Black community is to prioritize accountability over the loyalty that Greek culture fosters.

“It’s hard to call out someone for something they do, […] especially in a culture that inherently prioritizes loyalty over justice,” Gutierrez said. “We’re trying to flip that on its head.”

Silva-Garcia said she is encouraging members of Tri Delta to not be afraid to have uncomfortable conversations with each other about race, and she is trying to produce an environment conducive to those conversations.

Education is an essential part of being an ally to the Black community, but Silva-Garcia pointed out that it is not the job of people within that community to educate others about the issues they face.

“It’s being willing to do your own research to figure out how it is you can help,” Silva-Garcia said. “You can’t help if you don’t know what’s going on.”

Bishara said a good way to measure whether or not a person’s activism is performative or not is by examining what they have made for that cause.

“How much are you sacrificing?” Bishara asked. “Are you speaking up for Black people when there are no other Black people in the room? Are you talking to your white family members who may not be aligned with what you believe in? If everything you’re doing is preaching to the choir, then you’re not doing anything at all because the choir doesn’t need you. The people that need you are probably your own people, the ones who have found themselves within those systems of oppression.”

Gutierrez asked Bishara to speak to Sigma Chi about the struggles of being Black in America. Bishara said the message he had for the chapter related to how members can use their privilege to help the Black community and amplify Black voices.

“My voice, unfortunately, carries less weight, and it travels less distances than your voices do,” Bishara said. “To me, what it means to be an ally [is] utilizing your privilege, your ability to make your voice heard amongst people who won’t listen to me and affect change.”

“It’s our responsibility to try to bridge the gap,” Silva-Garcia said. “To be friends can help get rid of the stigma that Greek life is inherently racist because then people get a feel for what it actually is.”

Ultimately, Bishara said the worst thing a person can do in 2020 is to stay silent on the issues plaguing the Black community.

“People don’t realize, whether you’re black or white, the default setting in this country is anti-Blackness,” Bishara said. “If you don’t have an opinion, if you’re not being actively pro-Black, then you’re contributing to the oppressor.”

The ’Bu Yorker: HALFWAY THROUGH 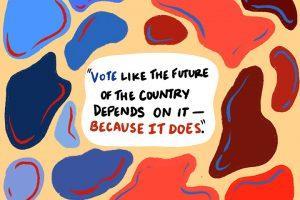 Art by Madeline DuvallIf the 2020 election were a normal election, campaigns would be scrambling to find the perfect "October...
Copyright 2013 Jupiter Premium Magazine Theme
Back to top