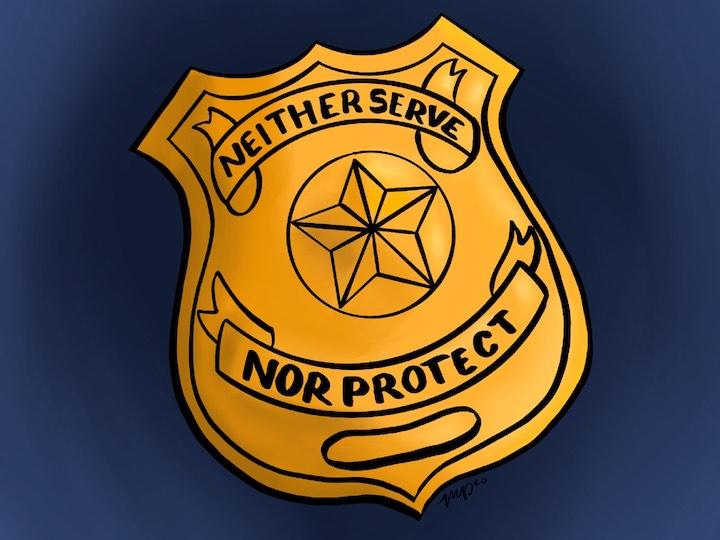 Usually, I write as Aj Muonagolu, assistant perspectives editor of The Graphic; this time, however, I’m writing as someone different. I’m writing as Anitiz Demond Muonagolu Jr., an African American male bombarded by the racial inequality present in America. The ongoing threat of police brutality following the murder of George Floyd not only affects myself but also many Black students at Pepperdine.

There are so many sides to this one issue. For some, it is “Black Lives Matter” vs. “All Lives Matter” vs. “Blue Lives Matter.” For others, it’s the debate between violent protests and peaceful ones. The main focus, however, should be this question: Is it fair for the police to commit warlike crimes toward an entire community of people?

The Black community and the world are opening their eyes and realizing the police aren’t an area of protection for the people. In fact, the Supreme Court has made it quite clear that its job is to defend the self-interest of the wealthy and powerful as opposed to American lives.

On multiple occasions, the U.S. court system upheld the notion that police officers are not obliged to protect citizens. One example includes the 2018 shooting at Marjory Stoneman Douglas High School, where students filed a lawsuit blaming the police and the independent school district for the incident and casualties. The federal court ruled against them, deciding that the police had “no constitutional duty to protect students who were not in custody.”

Later, in the case of DeShaney v. Winnebago and Town of Castle Rock v. Gonzales, the U.S. Supreme Court decided that “the police did not have a constitutional duty to protect a person from harm.”

Furthermore, Darren L. Hutchinson, associate dean at University of Florida School of Law, added, “Neither the Constitution, nor state law, impose a general duty upon police officers or other governmental officials to protect individual persons from harm — even when they know the harm will occur.”

How can the Black community trust the police to protect and serve them when the Supreme Court affirms that it’s not their duty?

Sadly, that’s not the worst of the matter. In light of this, Black and other people of color have to live on completely separate terms than their white counterparts. When learning how to drive, my first lesson wasn’t how to work the gears but what to do when an officer stops me.

Who do you think should remain the most calm? The innocent 16-year-old Black child or the police officer with the loaded firearm? The status quo upholds notions that leave the Black community wondering why they must always walk on eggshells just to ensure their safety, and it’s painful. This atmosphere of pain spreads across the nation, and the Pepperdine community is no different.

For instance, Pepperdine junior and Psychology major Jaylynne Walsh grew up in Yonkers, NY, a place she said is anti-Black “to the extent that there’s even an HBO series about it,” she wrote in an email. Furthermore, she expressed her experience with racism: “There’s a little of every community in Yonkers, but without a doubt, there are many who engage in microaggressions or downright racism toward the Black community.”

In response to the protests following Floyd’s murder, Walsh said America is beginning “a period of change that is long overdue.”

“The charging of those officers is only the beginning,” Walsh wrote. “I can only hope that people will continue to call for change and justice for those like George Floyd and the individuals who will and have been wrongfully harmed or killed since.”

Pepperdine sophomore and Screen Arts major Myles Dennis described his hometown of Baltimore, MD, as “over 80% African American.” He said the nation is divided on many fronts: “Class against class, privileged and the elite over the commoners and, on top of a class war, there is a racial divide scarred by centuries of racial prejudice”

Furthermore, being a part of the Alpha Phi Alpha fraternity and living as a Black man has taught him a lot about the nature of people in America. He continued by saying that “we are a nation made of many colors and hues, but everyone wants the color green [money]. … We trample over and break through anyone in our path to get there.”

Is there any way to change a nation bombarded with pain and racial injustice? Walsh suggested breaking down our current foundations and rebuilding them to be more inclusive.

“I’m positive that there are plenty of minds who are trained to find solutions that align with those guidelines,” Walsh wrote.

Dennis proposed educating oneself on the experiences of different Americans because understanding new perspectives can bring communities together to fight for progress.

Ultimately, there are many ways to seek justice, but the underlying necessity is the drive for change. Now more than ever, the world feels the Black community’s plight against police officers and other inequalities. The fact of the matter is that Black lives matter, so support the Black community in making sure the police, President Donald Trump, President Jim Gash and the American government learn this message once and for all.