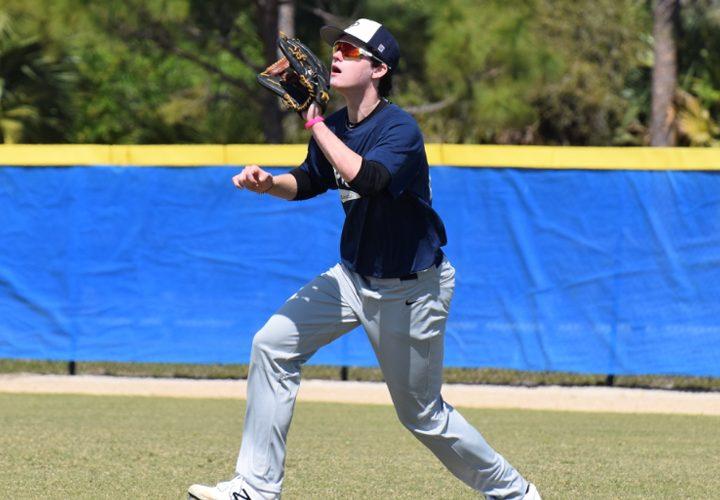 Freshman center fielder Connor Bradshaw tracks a ball during a practice with his Clubhouse travel team. Bradshaw, an outfielder from New York, said he hopes to help Pepperdine Baseball get to the College World Series in 2021. Photo courtesy of Connor Bradshaw

No. 1 and No. 16 in the country. These were the final rankings of Pepperdine Men’s Golf and Baseball when the West Coast Conference called it a season in March due to COVID-19 concerns.

As two of the most consistently talented teams on Pepperdine’s campus, they’re a frequent landing spot for high-level recruits. It doesn’t always take time for freshman athletes to make an impact on these teams, as junior shortstop Wyatt Young was on the All-WCC Freshman Team in 2018 and sophomore golfer Will Mouw, a GCAA/PING All-American, made it to the round of 16 in the U.S. Amateur Tournament.

“If you can hit, that’s when you play,” freshman outfielder Connor Bradshaw said. “I know I’m gonna have to step up to earn a role on this team.”

Bradshaw is a center fielder from New Rochelle, New York. Geographically, he’s an outlier on the Pepperdine roster, as 22 of the returning 34 players are from either California, Texas or Colorado. Bradshaw’s hometown is 2,838 miles from Malibu, making him the player who traveled the farthest.

Bradshaw said the distance didn’t stop the Pepperdine Baseball staff from finding him early in the recruiting process.

“They found me at a tournament in Florida,” Bradshaw said. “[Pepperdine Assistant] Coach Worth was one of guys that reached out to me. A couple months later I went to a camp at Pepperdine and did very well there and got to go out to dinner with the coaches. I had my official visit after that and fell in love with the school. They offered me there and I accepted right away.”

As a freshman, Bradshaw is in a coveted situation. Not only is he coming onto a highly-ranked team that lost just one player, but he’ll also have a strong chance to compete for playing time, as there are only four outfielders on Pepperdine’s roster.

“I’m in a really unique situation,” Bradshaw said. “The three starting outfielders are back, and without COVID, it would’ve been even less with how Billy [Cook] was playing, considering he’s a pro prospect. Even though they’re all here again I’m ready to fight for whatever playing time I can get.”

Bradshaw, a 6-foot-2-inch, 175-pound player, has a promising skill set. He’s touched 6.5 seconds in a 60-yard dash at multiple camps and said he was in the 6.45 range before he took a foul ball off of his ankle this summer that left him sidelined for a month.

Bradshaw said his speed and power are strengths in his game.

“I’ve always been fast, but the past couple of years I’ve really brought it up,” Bradshaw said. “I can get on base and steal pretty well. I think I have an ideal arm for playing in center. I don’t have an absolute cannon yet if I wanted to play right field. I have some decent power too. The best home run I ever hit was at that Pepperdine camp; it went over the scoreboard.” 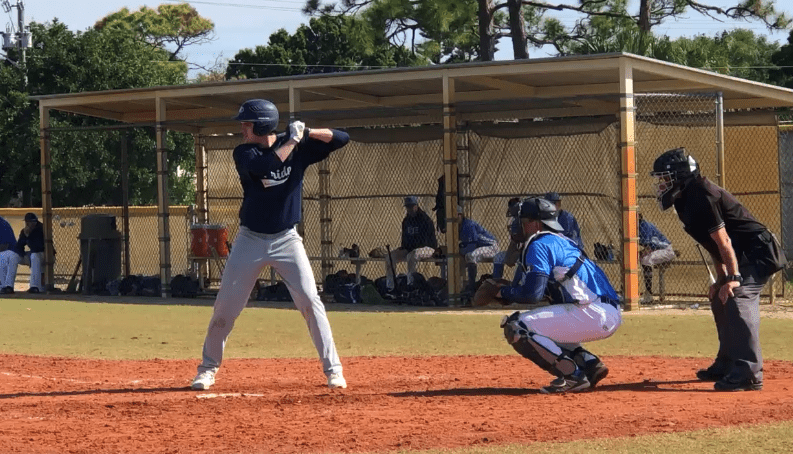 Bradshaw awaits a pitch during a game with Clubhouse travel team. The outfielder hopes to crack the starting lineup for Pepperdine Baseball in 2021. Photo courtesy of Connor Bradshaw

Bradshaw said he has several goals for the team during the 2020 season.

“When I was following them last year, I really thought they would make a deep run in [the College World Series] in Omaha,” Bradshaw said. “This year we have almost the same team with the rest of my recruiting class coming in. We should be picking up right where we left off.”

The lone golf recruit for the 2020 circuit is Caden Fioroni — a product from Torrey Pines High School in San Diego. Bradshaw and Fioroni were granted exemptions from Pepperdine and are living on campus.

Bradshaw and a portion of the baseball team are doing drills and batting practice at Head Coach Rick Hirtensteiner’s house. Fioroni has been golfing at local courses with older players who live in the area.

Before his illustrious high school career, he landed on Pepperdine’s radar as an eighth grader.

“It was at a tournament and a former Pepperdine assistant came to watch me play,” Fioroni said. “They continued to watch me during my freshman year. Coach Beard watched me for the first time at the Junior World Tournament. I was so nervous. Luckily it went well and I committed in the summer going into my sophomore year.”

Fioroni said he is excited to see how Pepperdine’s competitive environment will develop his game.

“When I first committed, I was good but not great by any stretch,” Fioroni said. “I feel like I’ve already made some strides, but I knew going here would be huge for me. With this insane roster, the expectation is the PGA Tour. I know that everyone is gonna just push each other; we’re all extremely competitive players. You need that to excel.”

Fioroni said that while he was recruited in eighth grade, he knew there was a possibility of playing college golf before that.

“I started to realize it in sixth grade,” Fioroni said. “I started shooting under par when I was 10 or 11. I think I was 12 when I played in a tournament qualifier and shot a 65 and 66 and won by 12. I started getting letters after that, which was really cool to see. The whole process was surreal.”

Fioroni, who was granted an exemption to live on campus, said he’s enjoyed the team dynamic from the players who are on campus.

“We have some characters but everyone really gets along with each other,” Fioroni said. “It’s the competitive aspect that sticks out to me. Everyone on the team has aspirations to go pro. Even though I haven’t seen everyone, I’ve seen everything I need to know that we can do big things.”

Fioroni said his strengths are in his long irons, meaning he can do serious damage around the middle of the hole. He joked that he can hit a four iron better than a sand wedge and also mentioned that driving has always come naturally — both reasons why he likes long courses. 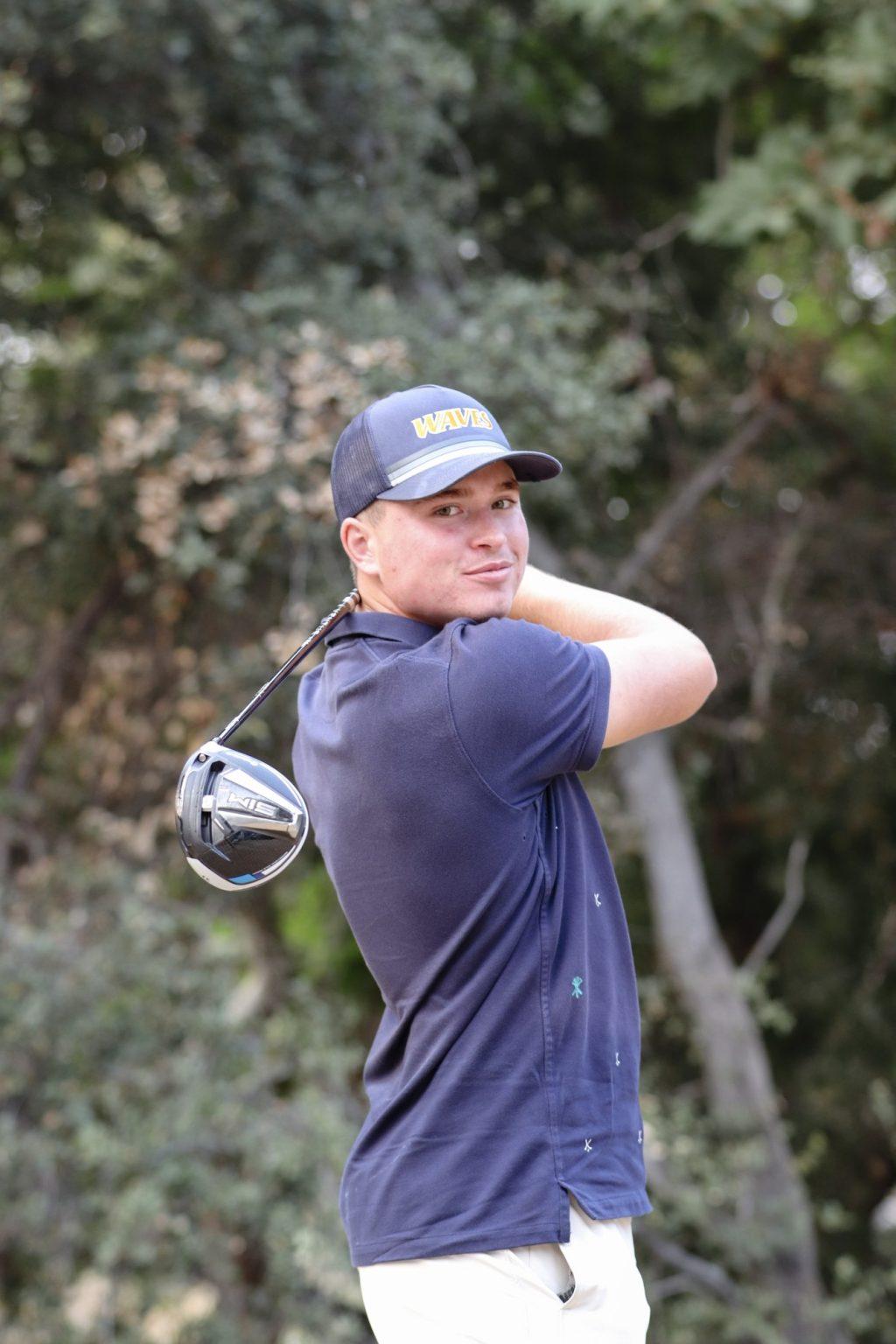 Freshman Caden Fioroni poses with his driver. The lone freshman on the 2020–2021 Pepperdine Men's Golf team said he uses his natural driving and long iron talent on long courses so he can let his natural talent of driving shine. Photo by Ali Levens

He said that although he had doubts during his senior year, he regained his confidence and is ready for his freshman year.

“Six months ago I was pretty nervous,” Fioroni said. “After getting past that, I know where my game is and I feel like I can be one of the top guys. It’s going to be hard jumping over some of our players, but I believe in myself and I know Coach [Michael Beard] does too.” 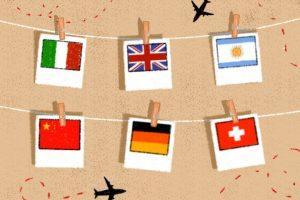 Art by Leah Bae When high school seniors eagerly accept admittance to Pepperdine, around 8 out of 10 of them do so with...
Copyright 2013 Jupiter Premium Magazine Theme
Back to top