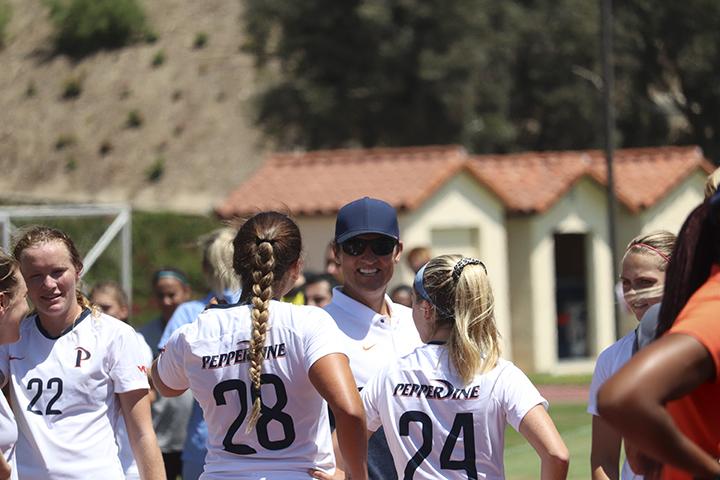 Pepperdine Women’s Soccer asserted dominance over the majority of the West Coast Conference for four seasons. Both 2016 and 2017 saw the Waves win the conference outright and make it to the second round of the NCAA Tournament.

The Waves took a slight step back and finished third in conference the past two years. The adjusted spring 2021 season is an ideal scenario for Pepperdine to return to the pinnacle of the WCC due to an experienced backline, talented group of juniors and an elite recruiting class.

“This is one of the most talented recruiting classes this program has ever seen,” Head Coach Tim Ward said. “When you pair them with the depth that we already have and these upperclassmen who have played for a full two or three years, there’s a ton of excitement in this group of girls.” 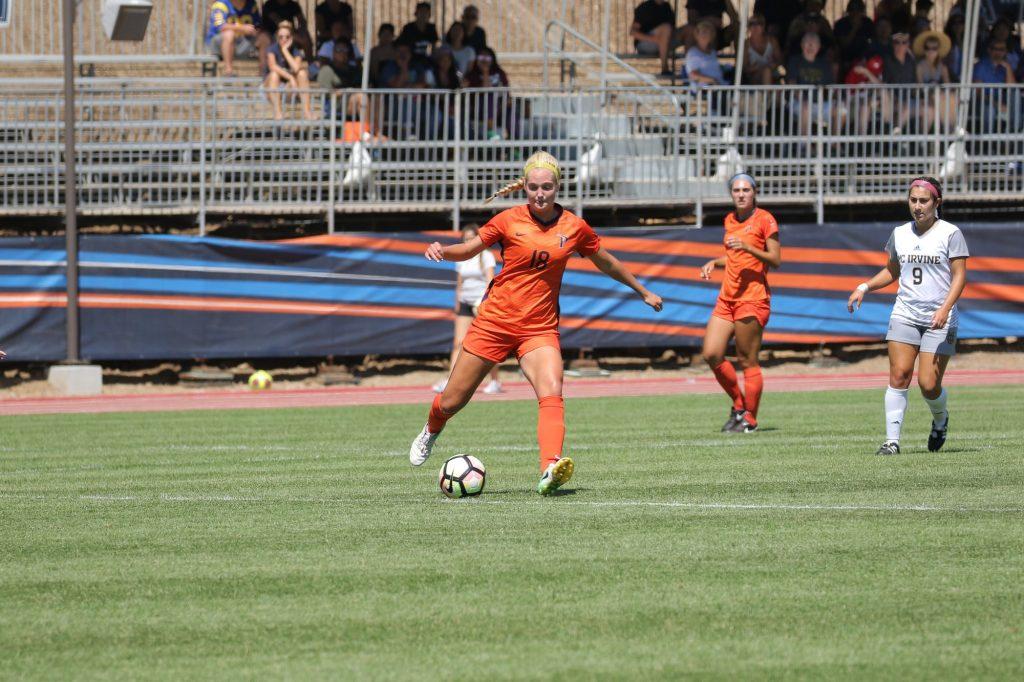 Senior defender Emily Sample boots the ball in a Sept. 16, 2018, game against UC Irvine. The Waves won the match 2–0.

One of the most experienced players on the roster with all-conference accolades has yet to play a game in a Pepperdine uniform. Redshirt junior Kelsey Hill started in 38 matches for the Saint Mary’s Gaels. After her sophomore season, she left the school primarily due to coaching changes and the program lacking consistency.

After sitting out the 2019 season per WCC transfer rules, Hill is poised for a breakout year and could play multiple positions, most likely defensive center-midfield or outside-back. Hill said she’s in a rare leadership role without ever having played a real game as a Wave.

“The situation is strange, no doubt,” Hill said. “I only got to play one game in the spring, and it was after two full years at a similar school. I’m not a freshman but yet I want to prove myself.”

Similar to the men’s and women’s volleyball teams, practices for soccer are split into groups. With 27 on the current roster, Ward splits them evenly three ways and shuffles the groups weekly with multiple players from each grade.

As somebody who was forced to watch every minute of the past season without ever stepping on the field, Hill says there’s a spark in this year’s group.

“More than ever, we’re bought into our mission,” Hill said. “We weren’t on the field together for so long, and because of that we’re grateful and ready to be back. We have such a big senior class and freshman class, which is interesting.”

Hill said she delivers an aggressive presence to the field and wants to be a vocal leader as well.

“I like to bring a physical component,” Hill said. “I like to go up and win balls in the air and have great timing but also keep up with other people throughout the course of the game. I also love to stay positive and keep my team up during the game.”

Ward said he thinks this year’s defense has the potential to match the energy of past groups.

“When you think back to ’16 and ’17 when we won the WCC, we were built on a defensive block,” Ward said. “We had the ‘defense wins championships’ mentality, and we’re trying to keep that going here.”

Another fourth-year defender with over 30 career starts is senior Laura Ishikawa. Ishikawa is one of three captains this year along with her roommates Emily Sample, who’s projected to play outside back with Ishikawa and Zoe Clevely, the oldest goalkeeper on the roster. 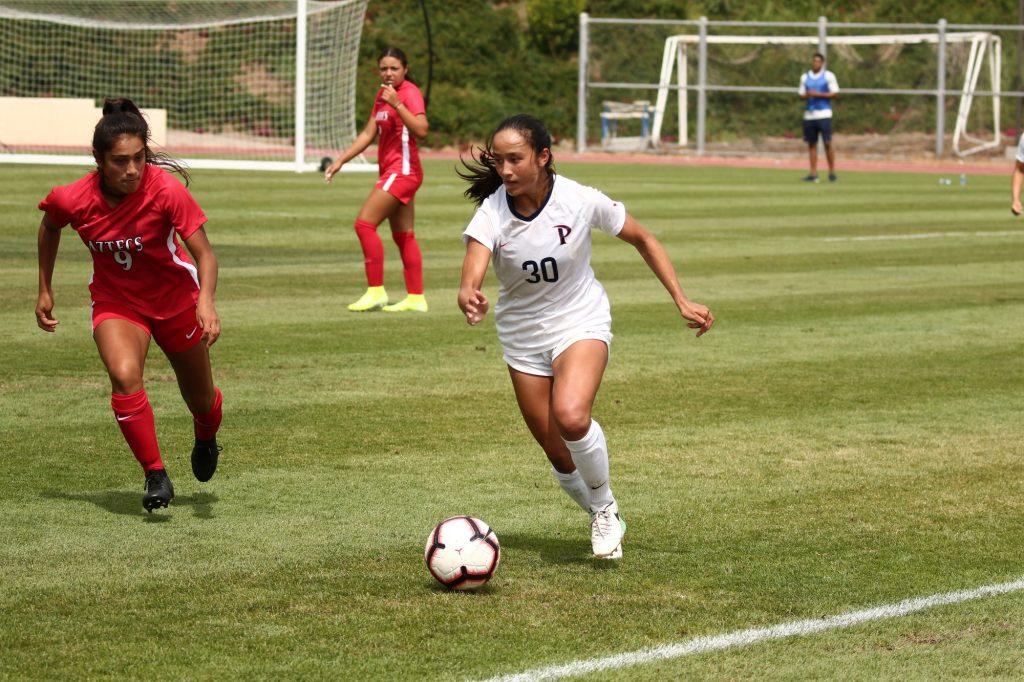 Senior defender Laura Ishikawa navigates an opponent in a Waves victory against San Diego State on Sept. 15, 2019. Ishikawa has played in 34 career games.

Ishikawa said the trio has adjusted well to being captains in the adjusted season.

“It hasn’t been the easiest transition,” Ishikawa said. “I put a little too much pressure on myself, thinking I had to do everything perfectly. Emily is great at the planning aspect and keeping the team together while Zoe, who’s a goalie with her own responsibilities, still gets so much respect.”

During their offseason work, Ishikawa said she noticed the stamina of the team seems higher than previous years.

“Our fitness has gotten a lot better,” Ishikawa said. “Every year we put an emphasis on that. We’re able to run faster and run longer over the course of games, which is very helpful.” 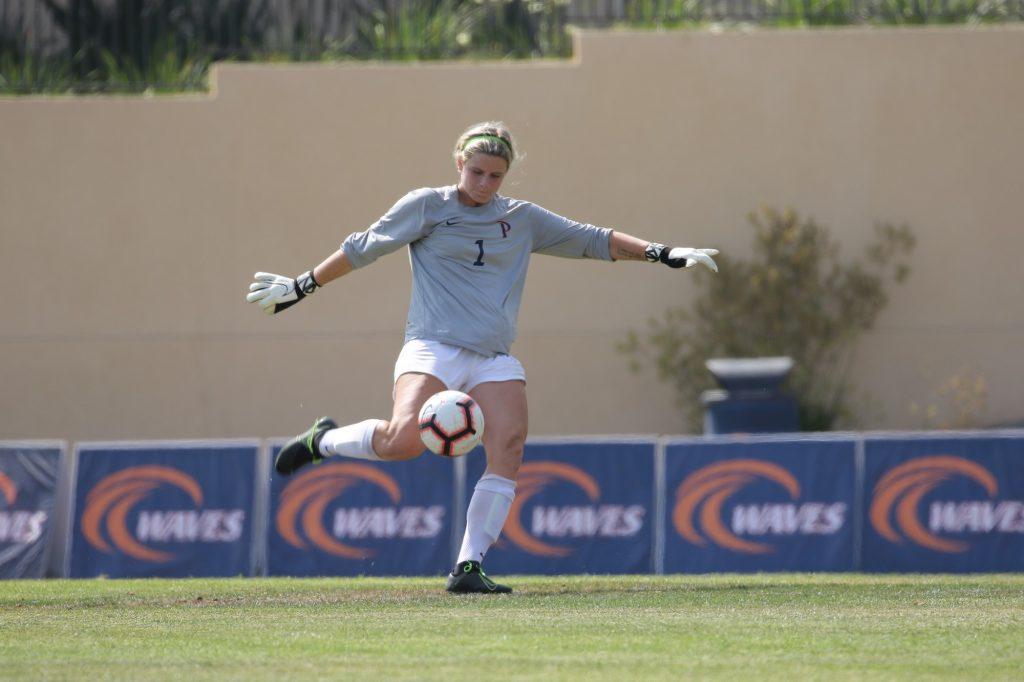 Redshirt junior goalkeeper Zoe Clevely bumps the ball with her knee in a victory game over UC Riverside on Aug. 22, 2019. In her first year starting, Clevely went down with an injury during the fourth game of the season versus Vanderbilt but is expected to return to her starting spot.

Ward, entering his 23rd season at the helm, said the postponement of the season put things into perspective.

“First and foremost, we’re just thrilled to be out there,” Ward said. “It didn’t always look great, but hats off to President Gash and his staff for getting it done. Being able to train is a huge deal, and we’re honored to be doing it.”

With a nine-player recruiting class, five third-year players who have played in 151 career games, a former SEC All-Freshman team transfer and an 11-player senior class, the roster is littered with talent and starting-caliber players.

Team headliners include two 2019 First-Team All WCC selections: senior forward Joelle Anderson and junior center-back Trinity Watson. Junior outside-back Izzy Nelson also has her fair share of recognition, as she was 2018 WCC Freshman of the Year and 2019 second-team all WCC.

Ward said one of his biggest challenges is finding roles for as many of the players as he can.

“There’s such a blend of experience and youth,” Ward said. “Our staff sits in the office, looks at the depth chart and we scratch our heads thinking, ‘Wow, we’re gonna have some really difficult decisions to make.’ And not just for the 11 starters but the five or six coming off the bench. It’s tough but a good problem to have.”

Ward said the abundance of talent cannot take away from the level of effort.

“It’s a scary statement but the majority of the time we’re going to have more talent on the field than the opposition,” Ward said. “Even though we might have more talent, we still need to have more grit than everyone in front of us and be the hardest-working team on our schedule.”

Women’s Soccer has a first allowable competition date of January 2021. The team confirmed will play all 11 WCC opponents and is currently looking to fill the rest of their schedule for an estimated 15 games. 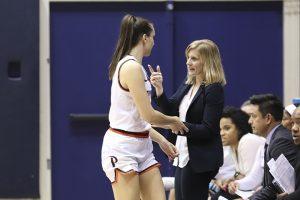