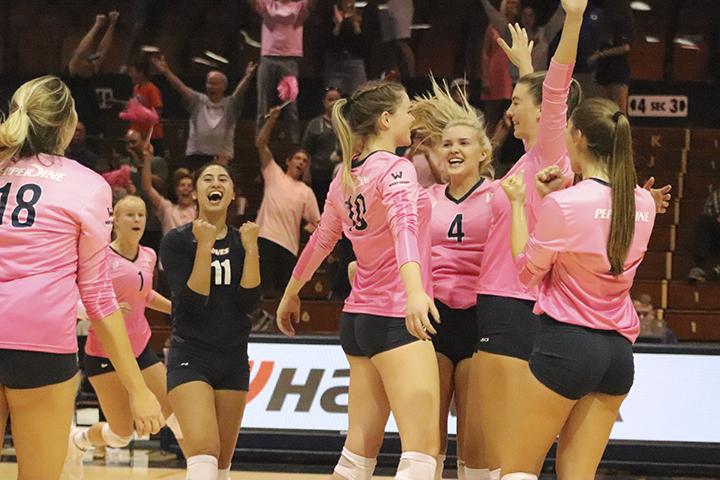 Pepperdine indoor volleyball teams are in the midst of an unusual buildup to their season. Seven months after the university sent all on-campus athletes packing March 11, the wheels of both squads are in motion and their first games are months away.

The women’s team — which typically starts their preseason matches in August — will compete in the spring. Both men’s and women’s programs have over 90% of their rosters on campus or in the Malibu area to start practicing. The design of the practices are much different, and their schedule will be smaller, but the athletes and coaching staff accept the compromise.

“We’re just so excited to have a season,” Women’s Head Coach Scott Wong said. “And we feel for all the teams that weren’t able to finish theirs back in March. Now our girls are hungry to compete and have big things coming their way with how hard they work.”

Currently, the men’s and women’s teams must practice in groups of 10. This means that each practice pod is two players short of playing an intrasquad, or a 6-on-6 scrimmage where the team is separated evenly.

On top of the split practices, Pepperdine made changes to the practice drills themselves. Senior outside hitter and All-Conference selection Shannon Scully said two defenders cannot jump in tandem to attempt a block during kill/block drills.

Despite the precautions that make the workouts unrecognizable, Scully said there is a benefit to the adjusted practices.

“The one nice thing is that we have this entire fall to train,” Scully said. “Usually we’re playing in the fall and we only have this summer to get ready. So even though it’s different, we’re getting more practice time now before we start playing. Just getting the opportunity to play again is what we’re all super excited about.”

Another challenge for the women’s team along with many other Pepperdine sports is gym time. Firestone Fieldhouse will be split four ways next semester with two volleyball teams and two basketball teams.

Although Women’s Volleyball is aiming for a 22–24 match regular season instead of a typical 28–30, the way the matches are played will look a lot different.

“There may be some double-headers,” Wong said. “There may be some games where we play early in the morning. With one gym and four teams we really have to accommodate what’s best for everybody. If we attack the schedule no matter what it looks like, there will be nothing to complain about afterward.”

Twelve of 15 players on the 2019 roster are back. The three departures were seniors Tarah Wylie, Hannah Frohling and Hana Lishman.

As a middle blocker and outside hitter on the front row, Wylie and Frohling were third and fourth on the team in kills with 285 and 258, respectively. Lishman, a libero, led the team in digs with 390 and was third on the team in sets with 80. Frohling and Lishman were also four-year starters.

Wong said replacing them will be a challenge, but he’s ready to see a different team identity.

“It’s not often where you have three young ladies like that who contribute to a team for such a long time,” Wong said. “Recruiting is something that we feel we’ve been doing well and we have suitable replacements. They have different strengths but, they are pieces that are going to add to the team immediately.”

The Waves offense attacked from all sides last season. Wylie and Frohling were two of four players that had over 250 kills, as junior opposite hitter Rachel Ahrens had 291 and Scully had a whopping 368.

Scully said she expects the offense to score by committee this season as well.

“We’re going to be even stronger in the pins,” Scully said. “Last year, with Tarah and I, we ran a lot of two-hitter rotations, and Rachel and Hannah would play off of that. We won’t have as much offense from our middles, but with me, Kayleigh [Hames] and Rachel [Ahrens], we’re gonna have more three-hitter rotations, which will be fun.”

In just two seasons, Scully’s career at Pepperdine is historic. After transferring from the University of Utah, she was on the WCC Honorable Mention selection in 2018 and an All-Conference selection last year. She has 732 career kills and 674 career digs, and the captain said she’s far from finished.

“There are goals that will make my last year surreal,” Scully said. “I want to reach 1,000 kills and 1,000 digs in my career. If I carried over my stats from Utah I’d be a lot closer. I just want the satisfaction from doing it only three years in a Pepperdine uniform.”

The men’s team is off and running as well, having split practices and weight training. Their schedule will also have some adjustments, targeting a 24-game schedule.

They open the season with Princeton on Jan. 3 and NAIA power Vanguard University on Jan. 9 and Coach Hunt said the team is looking for additional opponents whenever there is an opening in their schedule.

“This time of year feels like Christmas,” Hunt said, laughing. “Everyone wants to get out there to play each other and compete. The teams and staffs are all nice before the season, and the same can be said right now. Everyone wants to help each other out.”

With a spring start date, the NCAA plans to have the DI Men’s Volleyball tournament selection at its original May 6–8 slot. Hunt said the volleyball community is under the impression that the tournament will not be reduced to less teams if basketball can successfully field a tournament in March.

The 2021 team has higher hopes than the previous year. 2019 was a historic run for the Waves headlined by three AVCA All-Americans Michael Wexter, Kaleb Denmark and David Wieczorek.

The trio accounted for 70% of the team’s offense that year. The 2020 team’s rocky 8–6 start before the season ended pointed toward the team’s abundance of inexperience.

“There is no substitute for in-match time,” Hunt said. “We were chasing a national championship the year before. With our schedule, we’re never playing cupcakes. There isn’t time to throw the backups or young guys in to get experience.”

“Who doesn’t love bringing back just about your whole team?” Hunt said. “We’re already in the gym together. We’re talking about some pretty advanced concepts that they only scratched the surface of last year.”

One of the key players who got his feet wet last season is rising redshirt sophomore Jacob Steele. The 6-foot-9-inch opposite played in 48 of 51 matches last year and was second on the team in kills, behind only MPSF First-Team selection Noah Dyer.

Steele said the start of 2020 was a minor hiccup and the team is on a solid pace.

“We just weren’t used to playing with each other,” Steele said. “But to end the short season we started to do well in conference and had a great showing against BYU. We lost in four but all were close sets. The team is pumped to get back on the court together.”

Pepperdine also added six players with its 2020 recruiting class and acquired one transfer.

“With COVID, we almost had too much time to analyze things,” Hunt said, laughing. “So maybe I really tuned-up our offensive or defensive philosophy by thinking outside the box or it’s gonna be a total disaster cause we overthought it. In all honesty, we always try to change things up and get creative.”

Steele said he and the team are poised to exceed expectations.

“I’m just looking forward to getting another shot at it,” Steele said. “Last year was my first year starting and first year playing at all, and that season ended up getting cut short. Now I think our team has a really good shot at competing for a conference championship and even going far in the NCAA Tournament.”