“The Standard is the Standard”: Men’s Volleyball Reloads 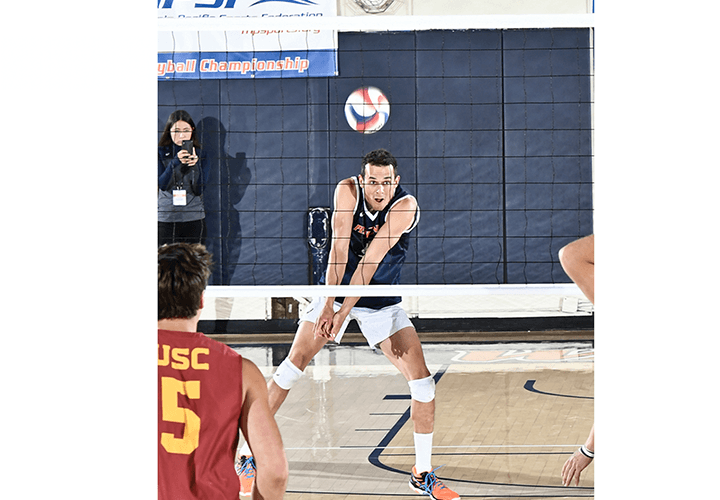 Pepperdine Men’s Volleyball lost 12 players from a 2019 team that won a conference title and finished third in the nation.

Five of those players were starters.

How does any team recover from such critical departures?

Well, there is a reason that this program has five national championships, second-most of any men’s volleyball program all-time. The Waves added a dozen new players to the 2020 roster, including six true freshmen, to immediately reload and reach the level of quality that has characterized the history of the program.

“Even though we have a lot of relatively young guys, each is leading in their own way and setting the standard, trying to live up to the standard,” Head Coach David Hunt said.

Despite the departures, the American Volleyball Coaches Association ranked the Waves No. 9 in the nation in its preseason poll.

Allow Hunt and several of his players to explain, through four key phrases, how the team approaches its 2020 campaign.

What it means: Exactly what it says — three All-Americans and two other starters from the 2019 squad graduated. Seven other players departed the team for various reasons.

The 2019 season saw the Waves win the Mountain Pacific Sports Federation (MPSF) regular-season and tournament titles, reach the NCAA Championships for the first time in more than a decade and fall to eventual champions Long Beach State in the semifinals.

The 2020 team, including the freshmen, is well aware of the shoes they must fill.

“Everyone was humbled to the fact that we knew we had to get in [the gym] and we had to work,” Scott said. 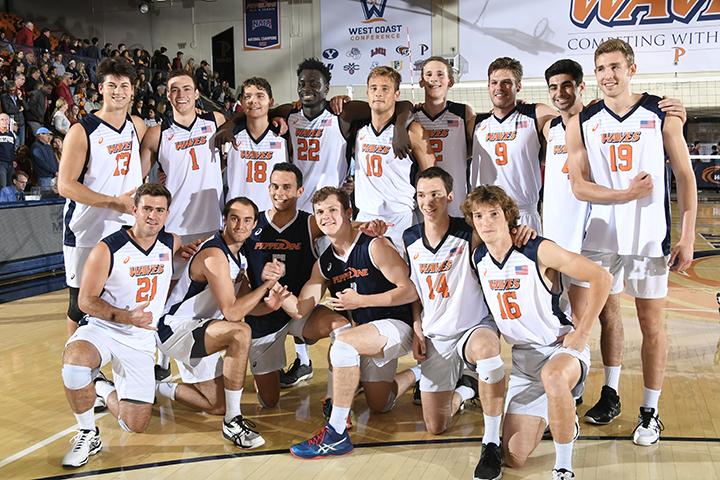 The 2019 team poses after its MPSF title. (Courtesy of Pepperdine Athletics | Martin A. Folb)

Outside hitters Alex Gettinger (junior) and Ben Weinberg (sophomore) are also returners who may factor into the lineup in the season ahead.

Dyer said the scarce number of returners strive to uphold the culture of the program by embracing either vocal leadership roles or leading by example.

“I’ve had to step into that [leadership] role a little bit, seeing as there are very few of us upperclassmen and seniors,” Dyer said. “It’s been a good growing point.”

Dyer’s role on the court is also changing. After playing outside hitter as a freshman and being on the MPSF All-Freshman team, Dyer transitioned slowly to the libero position, starting every match as the Waves’ libero in 2019. Now he is back at outside hitter for his senior season.

“Passing and defense is always a good time,” Dyer said, “but [there’s] nothing like taking a couple good rips at the ball.”

Hunt had high praise for one of his key returners.

“[Dyer’s] volleyball skill is so good, we have to have him on the court in some capacity,” Hunt said. “He literally can fill any position, other than maybe middle — but that’s only because we haven’t tried him there.”

“Every single spot is not for sure.”

What it means: With five starters gone and 12 newcomers, every offseason practice is a competition for court time during the season.

Diego Perez is one of two transfer players who is joining the six true freshmen, three redshirt freshmen, one sophomore walk-on and a handful of returners in a group who could potentially crack the starting lineup.

With so many positions up for grabs, practices are competitive.

“It makes the practices a lot more fun because you can’t slack off,” Perez said.

Dyer, who will likely start at outside hitter, made it clear that nothing is set in stone with less than a month until the first true serve of the season.

“There’s nobody who’s really eliminated from seeing time on the court,” Dyer said. “You’ve got guys in there at each position battling to see court time.”

Hunt said the competition between the group of newcomers breeds improvement throughout the roster.

“The rising tide lifts all boats,” Hunt said. “There’s lots of good volleyball being played in our gym, so therefore, guys are getting better. They’re having to make good plays every day.”

Perez, an Irvine native, attended junior college powerhouse Orange Coast College for one year, but a torn ligament in his foot sidelined him for the entire season. Perhaps the torn ligament was exacerbated by Perez playing a match on it in the club volleyball national championships.

Despite the unfortunate injury, Hunt said the newcomers are intelligent on the court.

“The collective volleyball IQ of those guys is really impressive,” the third-year head coach said. 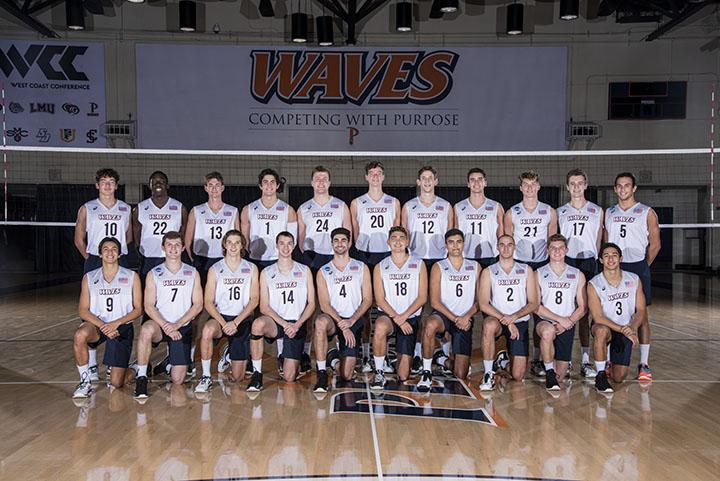 The incoming true freshman group in particular is impressive, but the question remains how quickly they will adjust to the speed of the college game.

“They have the physical capabilities of being top players in the country,” Perez said. “The experience of playing at a high level isn’t there, but they definitely have the potential.”

Scott, one of the freshmen seeking to earn playing time, cited the speed of the game as a learning curve.

“It’s definitely been tough at first because I come from Midwest [where] everything’s just a bit slower,” said Scott, who is from the Chicago area. “At first, for me, it was just adjusting to the speed of the game.”

After sitting out for a season, redshirt freshmen JT Martin (middle), JT Ardell (middle) and Jacob Steele (opposite) are also battling for starting positions.

Martin and Steele, both former U.S. Junior National Team players, likely will figure into the conversation for starters.

Dyer recognized the dedication of this group.

“Just because [the redshirts] didn’t get on the court doesn’t mean they didn’t contribute,” Dyer said, “because every day in practice, they would grind, and so they would really push the guys on the other side of the net.”

What it means: In Hunt’s words, “[The Steelers] never really discussed what the standard was, but everyone knew what they were talking about. The standard for us is, ‘What is it going to take to be a championship team, a national championship team?’”

With 16 appearances in the NCAA Championships, including the 2019 semifinal run, Men’s Volleyball is arguably the most successful program at Pepperdine — one that has finished in the top six in the AVCA Rankings in 18 of the previous 23 seasons and is not satisfied with a rebuilding year.

“The standard is the standard,” a phrase popularized by Tomlin, indicates the expectations of the program need not be spoken. It is simply assumed that the team expects itself to function at a high-caliber level.

“Everything that we do has to be that championship standard,” Hunt said.

Hunt went on to say each player must have the intrinsic motivation to lead themselves to a higher level. This philosophy suggests that this motivation, coupled with the competition for playing time, will lead the young team back to the pinnacle of the collegiate volleyball scene.

“Obviously, you’re competing for a spot, but by doing so, you’re making the person next to you better,” Scott said.

The high standard and culture of the program remain, despite the mass exodus of players. Dyer said that the work ethic of the 2019 team in the practice gym and the weight room carried over to this team, but the play style is undergoing a “rebranding.” 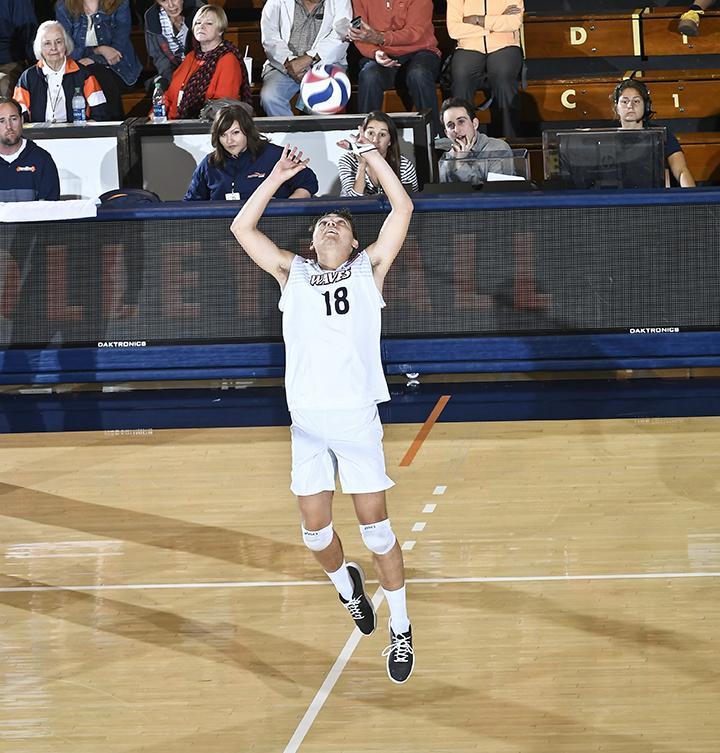 Senior setter Rob Mullahey, shown here performing a back set, is one of the few holdovers from the 2019 starting lineup who seeks to maintain a winning culture. (Courtesy of Pepperdine Athletics | Martin A. Folb)

“The way it’s looking right now with the talent that we got, we’re going to have some really good ball control,” Dyer said. “Whereas in the past it was probably serving and some really big guys spiking, but at this point, with our team here, we’ve got a lot of guys who are really good [at] ball control and really good all-around volleyball players.”

Though he hopes to enjoy his final season as a Wave, Dyer said his competitive drive leads him to have soaring goals for the 2020 team.

“My goal is to be in the same place or do even better as we did last year,” Dyer said “That is a lofty expectation, but I think we can do it.”

Integrating so many new pieces is no easy task, but Perez agreed that a return to the NCAA Championship tournament is the goal.

“We have a lot of room to grow, and I think we could do it in this short time,” Perez said. “We definitely have a really good chance to compete for a top-three spot. I think we could even win [the national title], but it’s going to take a lot of hard work.”

Who said it: Senior outside hitter Noah Dyer

Though the 2020 regular-season schedule sees Pepperdine playing seven of the top 11 teams in the final 2019 NCAA rankings at least once, several opposing schools also lost players to graduation.

Six of these seven teams saw at least one All-American graduate. Brigham Young (BYU), No. 11 last season, is the lone exception, as both of the Cougars’ All-Americans were underclassmen.

“There are a bunch of teams that have lost a lot of their talent as well,” Scott said. “Everyone is fighting to adapt the fastest.”

Scott said that the Waves’ ability to adapt to the new personnel will determine how they are able to gain an edge over the competition.

The team had a break from practice for finals and Christmas, before they returned to the gym Dec. 26 to prepare for their season-opening exhibition match Dec. 30 against Canada’s University of Guelph.

“We’re chomping at the bit,” Dyer said. “We’ve been practicing in the offseason this whole time, and it’s fun to play against your own guys for a while, but you really want to test your steel against some of the good teams that we’re going to be playing this year.”

Some of those teams include conference foes in the MPSF, including Stanford, BYU, Southern California and UCLA.

“[The MPSF] is a collection of teams that are really talented, and I think, top to bottom, we’re probably the best conference in the nation,” said Hunt, the reigning MPSF Coach of the Year.

One conference team that may provide a stiff challenge is BYU as the Cougars return their entire starting lineup.

“[BYU] brings a few thousand fans into their small gym, and they get really into the sport, so I’m really excited to play there,” Perez said, also citing the altitude in Provo, Utah, as a challenge.

“Volleyball isn’t really the same outside of Southern California,” Scott said, citing matchups with the Waves’ conference rival UCLA (March 13 and 25) and local rival UC Santa Barbara (Feb. 21 and 26) as games to mark on the calendar.

Additionally, one of the biggest matchups of the season will take place March 17 in Firestone Fieldhouse when Hawaiʻi comes to Malibu. The Rainbow Warriors were the national runner-ups in 2019.

“[Hawaiʻi] didn’t lose too many guys, so they will be really tough this year,” Scott said.

For the many new Waves, playing at such a high level will be an adjustment, but the returners and coaching staff have the experience to help the newcomers adapt.

Defending conference champions or not, the 2020 team is taking nothing for granted.

“We’ve been setting a high standard here for the past so many years,” Perez said. “It’s nice to come in with some guys that got a taste of that, so they’re in it to win it and not playing around.”

The Waves begin a three-game East Coast road trip today with a game against Daemen College in Amherst, New York.

Their next match at Firestone Fieldhouse is Feb. 12 against Concordia-Irvine.

Listen and subscribe to our podcast from your mobile device:  Via Apple Podcasts | Via Spotify | Via Stitcher In...
Copyright 2013 Jupiter Premium Magazine Theme
Back to top