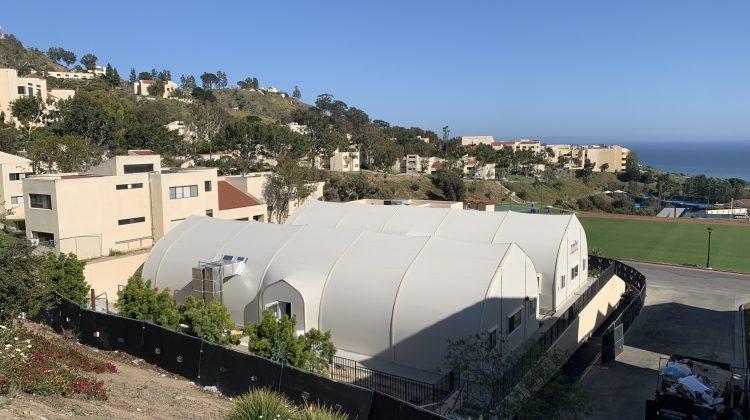 Pepperdine’s new temporary fitness center is reaching final stages of construction on April 6, with a projected finish summer 2022. Students said they hope the fitness center will offer a wider variety of equipment. Photo by Alec Matulka

Pepperdine’s new Temporary Fitness center is projected for completion in summer 2022. This fitness center is not the only new change, a new Wellness Fee will be added to student accounts in August.

Students who utilize Pepperdine’s facilities weigh in on these changes, along with sharing why working out is so important to them.

“If I get to have a better gym and feel safer working out, then I think that it’s worth it,” junior Cassandra Hewett said. “Because the law school gym doesn’t have the Smith Machine and as someone who can’t by themselves, I’ll get scared to lift heavy or squat heavy because there’s nothing there to save me if I can’t lift the amount of weight that I put on.”

Sophomore Abraham Wilson lives in Seaside for the 2021-22 academic year, and uses both the Seaside and Firestone Fieldhouse fitness centers. Wilson said he uses the Firestone Fitness center because although Seaside is closer, Firestone offers more equipment.

“I’m excited because the new gym will have even more equipment and more room and it will speak closer to me or to Lovernich apartments,” Wilson said.

“Pepperdine promised that the building would be done by the end of the 2021 year, which is just kind of a bummer because when the Seaside gym was closed because of COVID, we all had to go to Firestone Fieldhouse and that would make it pretty crowded,” Wilson said.

First-year Marla Steele lives in Eden for the 2021-22 academic year. While she is next to the construction, Steele said the noise does not bother her much because she is an early riser, but some of her roommates have been woken up.

Steele said, while she tries to work out at least five times a week, she does not like Firestone and only goes there two times a week. Other days, she works out off-campus or goes on long walks.

“I feel like being outside being just walking in God’s creation is kind of just like something that’s really soothing,” Steele said. “I’m a huge advocate for like, the way you feel on the inside kind of reflects like the way you look on the outside.”

Wilson usually gets in his workouts in the morning alongside friends, and plans to take Pepperdine’s Intro To Weightlifting course in the fall 2022 semester.

“I think working out is important because it shows that you care for your body and that you’re healthy,” Wilson said. “And I think it’s also a great de-stressor, especially in college when you’ve got a lot of academic stressors.”

Hewett said she lives off-campus, but uses the Caruso School of Law gym to work out, because of the overcrowded nature of Firestone Fieldhouse.

“Firestone’s a little too dungeon-like for me,” Hewett said. “I don’t like being down there, it’s too congested and there’s not natural light or anything. It’s also too small for the amount of people that need to use it.”

Hewett said while she has tried a cycling class at Pepperdine, she goes off-campus for yoga classes.

“If I had $80 a month to spend, I would go to Malibu Fitness, but I don’t,” Hewett said. “So I go on campus to weight lift and I go off campus for yoga, because yoga is just cheaper to do off-campus.”

“Having the variety like allows people not to get super bored and feel stagnant in the exercise that they are doing,” Steele said. “So it provides a wonderful outlet for people who want to stay fit at Pepperdine.”

To make working out more accessible, Hewett said the fitness classes were a great way to start, but said using gym equipment can be hard for students just beginning.

“My friends know me as someone who likes to work out, so they’ll like text me and be like, ‘Can you take a video of yourself doing it?'” Hewett said. “‘I don’t know how to use this machine.’ And there’s no one there to tell them.”

When the new fitness center is finalized, Hewett said she will likely transition to doing a majority of her workouts there. While Hewett does not know how Pepperdine will implement the new Wellness Fee, she said she hopes it contributes to better equipment in fitness centers.

While she is on the waitlist for housing, Steele said she will most likely live in Lovernich next year, and said the new Wellness Fee offers an incentive to try Pepperdine’s fitness classes.

In addition to fitness classes, Steele said students would also benefit from classes on how to use the gym equipment.

“I know a lot of people are scared to walk into the gym and try out the weights or like, use a barbell, and it can be intimidating,” Steele said. “It’s like you feel like you don’t know what you’re doing and everybody else around you does, but really, everyone feels like that.”