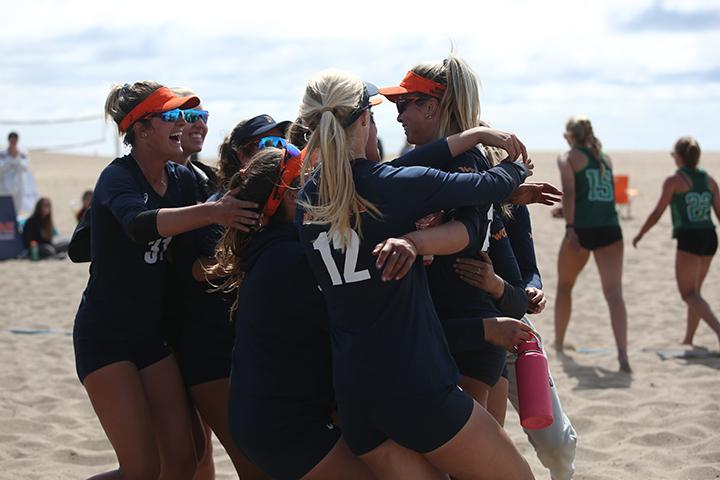 Pepperdine Beach Volleyball huddles during a 2020 match at Zuma Beach. Beach Volleyball is a spring sport, one of nine spring teams whose season was cut abruptly short due to the threat of coronavirus. Photo courtesy of Sarah Otteman | Pepperdine Athletics

In a matter of less than 30 hours, everything changed for hundreds of Pepperdine student-athletes.

They went from cautiously optimistic about remaining in Malibu and training for the final seven weeks of the semester to devastated by a spree of cancellations that ultimately ended their seasons.

The final straw was an NCAA decision around 1 p.m. PST on Thursday, March 12, which effectively ended all winter and spring sports seasons by canceling all championship events. Neither March Madness nor any other remaining 2020 championship event will occur this season.

“[I] can’t really get closure on the subject because I’m never going to put on that jersey again,” senior Deahna Kraft of Pepperdine Beach Volleyball said. “I’m never going to be able to do all these things that we wanted to do [as a team].”

Listen to this story in our news podcast ‘The Graph’:

“We knew the issue with the coronavirus was spreading rapidly, and we wanted to help stop that,” Men’s Track captain Jalen Frantal said. “When we found out classes were going remote, obviously we knew it was good and we were pretty happy about it — we could just focus on training and racing and do our classes online.”

Seniors were understandably shaken at the prospect of many of their friends going home, but the sports world remained largely unperturbed.

Despite new attendance limitations — NCAA March Madness was to be played without fans, and fans at Pepperdine events would be limited — and some conference basketball tournaments being canceled, Pepperdine Athletics events continued as planned March 11.

“Sports are never really affected by what’s going on in the world,” senior Beach Volleyball player Gigi Hernandez said. “If something’s going on, you still have sports to go to — that’s an escape for a lot of people.”

Men’s Volleyball defeated Jamestown at home in straight sets. Beach Volleyball traveled to USC to play two top national programs in the No. 6 Trojans and No. 2 UCLA. The team’s morale was high going to and from the matches, as they gave the two tough opponents a good battle.

“Wednesday, it wasn’t like I was going into it knowing that it was my last time doing all these things — I wouldn’t be going on Zuma Beach [to play] again,” Kraft said.

However, that night, the sports world began to feel the effects of COVID-19 more strongly.

The NBA suspended its season immediately when a player (Utah Jazz center Rudy Gobert) tested positive. The National Hockey League followed suit Thursday morning, as the league shares many facilities with the NBA. Major League Baseball was next, canceling the remaining spring training games and postponing the beginning of the regular season at least two weeks. The Association of Professional Tennis and Major League Soccer suspended play. Eventually, the XFL canceled the rest of its comeback season.

In the collegiate realm, Duke University became the first school to suspend all athletics programs, meaning they would pull out of the NCAA Men’s Basketball tournament.

Just before noon on March 12, when the Pac-12 Conference canceled all sports for the duration of the academic year, the situation became apparent to the Pepperdine student-athletes.

The student-athletes who were not in season received information that they would not be able to remain on campus for practice, as they initially believed.

Deahna Kraft, sitting in the final physical class of her undergraduate career, was in disbelief.

After Kraft and Hernandez had a productive meeting with their coaches to discuss their plans for the team throughout the remainder of the season, they walked into a film session at 1 p.m.

Hernandez recalled the moment she received the news about the NCAA decision.

“We’re in the middle of film, and one of the freshmen tapped me on the shoulder,” Hernandez said. “She goes, ‘Did you see this?’ and her face was just like she was going to cry. I read it, and I don’t even know what to say. I immediately get extremely emotional, but I don’t say anything.”

“[In that moment] I don’t want to say anything; I just want to enjoy the last 15-to-20 minutes where our lives aren’t really flipped upside down,” Kraft said.

Following the film session, the coaches informed the team that the season was over.

“It felt unreal,” Hernandez said. “I still question it sometimes.”

Later, the West Coast Conference finally announced the cancellation of all spring competitions, including formal and organized practices.

Hernandez, remembering her freshman year when her team only lost by two points in the national championship match, said she would have rather had a “horrible season” than to lose the season abruptly.

“I would have rather gone out failing than gone out without the chance to even go for it,” Hernandez said. “That’s what was heartbreaking.”

“I think that it is necessary to get these seniors from spring sports their year of eligibility,” Kraft said.

The NCAA obliged the following day, though it did not decide about eligibility for the winter sports, nor did it address how scholarships and roster sizes would be affected in 2021 if a large number of seniors returned for another season.

Kraft, who plans to play indoor volleyball at the University of Wisconsin—Madison as a graduate student, said the extra year of eligibility would not change her decision.

“I’m truly grateful for everything that everyone’s given me, and I know that a lot of the other spring athletes that have lost their eligibility feel the same,” Kraft said. “It’s safe to say that I’m speaking on their part that Pepperdine changed us all for the better.”

For other seniors who already had plans post-graduation, the extra eligibility was a small consolation.

“It’s really frustrating,” Frantal said. “I plan on taking a gap year and doing some service work, but it makes me question, ‘Should I have gone to grad school and potentially use this last year?’ Because we’ve worked so, so hard these past couple months.”

When the reality of the NCAA decision set in, many student-athletes realized that they were a day behind the rest of the school in figuring out how they were going to move off campus or travel home within only a few days’ time.

“From then on, it’s kind of been trying to figure out a way: Where are we going to stay? How are we going to fly back?” Women’s Golf senior Momoka Kobori said. “We have a lot of international students, and for a lot of them, it was difficult figuring out when they’re going to get back into their country.”

The various teams, who had but a few days remaining together, attempted to create closure.

Men’s Volleyball scrimmaged each other in Firestone Fieldhouse on Friday.

Women’s Golf played one last round together.

Men’s Track ran their own marathon from Pepperdine’s campus to LAX on Sunday.

Baseball hoped to scrimmage but were thwarted by rain, so they simply held a team meeting and turned in their uniforms.

“We had a bunch of watery eyes,” sophomore shortstop Wyatt Young said. “You know, not knowing exactly what the future will hold for next year, if guys will come back, if they won’t. And our future success is dependent on those guys.”

Athletic facilities at Pepperdine’s Malibu campus are closed, as LA County implemented restrictions on gyms and other facilities due to COVID-19 concerns. Some student-athletes, mostly upperclassmen, remain in the Malibu area, but cannot hold an official practice.

“I think at least having the community, my friends, my teammates — I think that will be a light in this crazy storm that we’re going through right now,” Frantal said.

In addition to student-athletes losing their seasons, senior Fine Arts students endured the cancellation of their final department theater performances, concerts and recitals.

“The only closure that you can gather from it is lessons that you can learn from it and knowing that it’s out of your control,” Kraft said. “And that’s closure in itself.”

“You never know what you have until it’s gone,” Kraft went on to say.