Both Basketball Teams Reach WCC Semifinals for First Time Since 2004 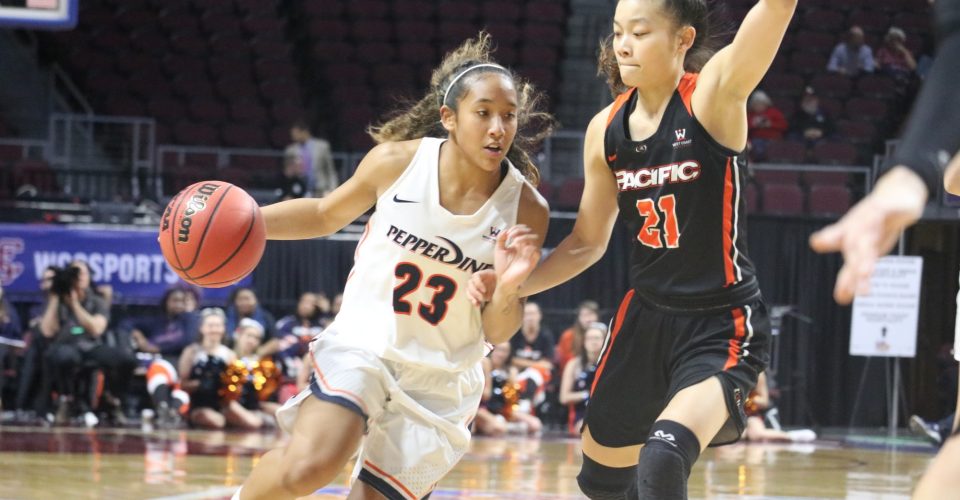 With talented young rosters, big-name head coaches and now notable runs in the conference tournament, both Pepperdine Basketball programs have newfound optimism after struggling for the better part of this decade.

Both programs reached the semifinals of the West Coast Conference (WCC) Championships tournament March 7-11 for the first time in 15 years, although each team took very different routes to reach that point.

“We ended up surprising a lot of people but also just proving to ourselves that we belong here and that, at the end of the day, we can play with anybody,” Women’s hoops senior forward Yasmine Robinson-Bacote said.

The conference office named Robinson-Bacote the WCC Player of the Year, and she was one of six Waves, between the two programs, to receive All-WCC honors.

The Women’s team put together a 12-6 campaign in the conference regular season, earning the third seed and two byes in the tournament, despite finishing eighth in the conference in 2018 and the WCC coaches picking them to finish ninth before the season began.

“We are a totally different team [from last season] … we’re mentally stronger, we’re physically more capable to last …” Robinson-Bacote said. “When we found out we were picked ninth, we felt motivated.”

The entire tournament was contested at the Orleans Arena in Las Vegas, and the women played their tournament opener Saturday, March 10 against Pacific, a team that had already played a game in the arena.

“Going into the game, they were definitely more comfortable on the hoop, but we definitely had the fresher legs,” Robinson-Bacote said. “I think we ended up using that to our advantage.”

The sixth-seeded Tigers and Waves had split their regular season series, and the teams matched up well, but the Waves were able to come away with an 87-84 victory behind 26 points from Robinson-Bacote and 20 from junior guard Barbara Sitanggan.

“Thank goodness we had a nice cushion to work with to be able to sustain their run,” Head Coach Delisha Milton-Jones said. “We hit some timely shots late in the game and that was what really sealed the deal for us.”

In Monday’s semifinal matchup against second-seeded Brigham Young, the Waves jumped out to an early lead before seeing BYU hit timely shots and make the final run of the game.

“We definitely let it slip away,” Milton-Jones said. “We had a 13-point lead, and that diminished in a matter of probably a minute and a half, just a couple possessions.”

The eventual conference champion Cougars closed out a 68-63 win, as Pepperdine failed to score a field goal in the final 5:47 of the game. Robinson-Bacote agreed that the Waves “gave that game away” but remained optimistic for the future.

“They’re a good team, and we know that if we’re going to beat a good team, especially in those circumstances where a championship game is on the line, we were going to have to play a lot better than we did,” Robinson-Bacote said.

“I’m confident that we’ll get a bid,” Milton-Jones said. “We’ve been on their watch list all season long, so something good definitely is going to come from that.”

The WNIT Selection Committee will announce the 64-team field late in the evening of Monday, March 18 after the NCAA Tournament field is announced.

On the Men’s side, the Waves entered the WCC Championships as the eighth seed after finishing 6-10 in the regular conference season, a year after going just 2-16 in conference.

The men also opened the tournament with a win against Pacific, coming back from a 12-point second half deficit to win 61-53 behind a career-high 15 points from freshman guard Darryl Polk Jr.

However, due to a new format in the WCC Championships, teams seeded between seventh and tenth would need to win two games simply to reach the quarterfinals, so the Pepperdine men came back the night after defeating Pacific to take on rival Loyola Marymount (LMU) on March 8.

Again, the Waves needed a dramatic comeback to pull off the victory.

“The last four minutes we really started to come back, and then I hit the shot with 30 seconds left … just to do it in that tournament, it meant a lot for me and my teammates,” sophomore guard Colbey Ross said.

“The shot” to which Ross is referring is a game-winning three-pointer, off the dribble, over an LMU defender, to put the Waves ahead for good. The team would win 68-65 after LMU missed a three-point shot at the buzzer, but the Waves were still not finished in the tournament.

The next night, Pepperdine met fourth-seeded San Francisco, a team coming off a week of rest.

“It definitely helped just playing those two games before, because we were shooting the ball well,” Ross said. “In that San Francisco game, I think us playing a couple games on [the Orleans Arena] court really helped.”

Despite playing their third game in three days, Pepperdine promptly destroyed the Dons behind 26 points from Ross and 14 from freshman forward Kessler Edwards. The Waves shot the lights out in the 89-72 win, hitting 14 threes and shooting 49 percent from the field, en route to their highest point total in a WCC game all season.

“At the end of the day, I think it was just us showing what we’re really made of — how good of a team we really are when we do the little things,” Ross said.

The three victories earned Pepperdine a date with Gonzaga, the top-ranked team in the country, in Monday’s semifinal. The game was played in front of a sold-out, pro-Gonzaga crowd and a national television audience on ESPN.

“I think it was a good experience for next year and when we have to play versus good teams who are ranked,” Ross said.

The Waves’ momentum stalled against the Bulldogs, as Pepperdine was down to seven rotation players, with junior forward Kameron Edwards and freshman guard Andre Ball sidelined by injuries earlier in the tournament. Gonzaga won in dominant fashion, 100-74, leading by as many as 41 points in the second half.

“We didn’t come out with a win, but it’s exciting when you get to come out and play the number one team in the country,” Ross said. “You have [legendary basketball sportscaster] Dick Vitale calling the game … it’s just exciting.”

Just spoke with @PeppBasketball Coach @CoachRomar faces tough task vs # 1 in the nation @ZagMBB semi/ finals of @WCCsports in Las Vegas Lorenzo’s kids have won 3 in a row & r the best 3 pt shooting team in conf . Make 9 per game @espnbob & I will call on @espn 9 EST Mon.

Against Gonzaga, Ross posted his 18th game of the season with at least 20 points, and also finished the WCC Championships with 80 points total, a new Pepperdine record. In the process, Ross was named to the All-Tournament Team and the All-WCC First Team in the regular season.

“It does show my hard work starting to pay off,” Ross said. “Next year, I hope I get the First Team [again], but I hope we win the tournament; that’s the ultimate goal.”

As always, both Ross and Robinson-Bacote deflected credit to their teammates and coaches.

“Even though my name is on the award, it’s definitely a team effort,” Robinson-Bacote said. “There’s a lot of talented players in the conference, and for me to be the one who came out on top … I’m still shocked about it, I can’t believe it.”

Four other Waves basketball players received accolades in the regular season: the conference office named both Kameron Edwards and Sitanggan to the All-WCC Honorable Mention teams, and both Kessler Edwards and Women’s Basketball’s guard Malia Bambrick were selected for the WCC All-Freshman Teams.

Coach Milton-Jones mentioned the significance of having a senior, junior and freshman all win awards.

“I think that parity right there shows that, in our system, it’s really a free-for-all,” Milton-Jones said. “Everyone should come and be aggressive and play their best game. I’m proud of that because that’s the environment I wanted to create.”

Both Milton-Jones and Men’s Head Coach Lorenzo Romar have made tremendous strides in their second and first seasons, respectively (although Romar did have a previous three-year stint with Pepperdine).

Milton-Jones, a former WNBA All-Star and Olympic gold medalist, has engineered a 13-win (and counting) improvement in her first two seasons at the helm, and the first Pepperdine WNIT appearance since 2011 is a strong possibility.

Romar, a longtime coach at top programs like UCLA, Arizona and Washington, has reversed the culture of a program that won only six games in 2017-2018.

“Whatever [Romar] tells me to do, I have full trust in it, because he’s been there so many times and he’s coached some of the best players to ever come out of college,” Ross said. “He’s going to do to whatever it takes to help us get the job done.”

Although the Pepperdine men do not expect to be selected for a postseason tournament this season and they will lose seniors Darnell Dunn and Marcus Cooper Jr., the team expects to improve in 2019-2020 behind Romar, Ross, the Edwards brothers and Oregon transfers Keith Smith and M.J. Cage. 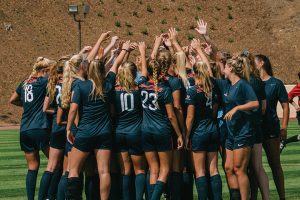