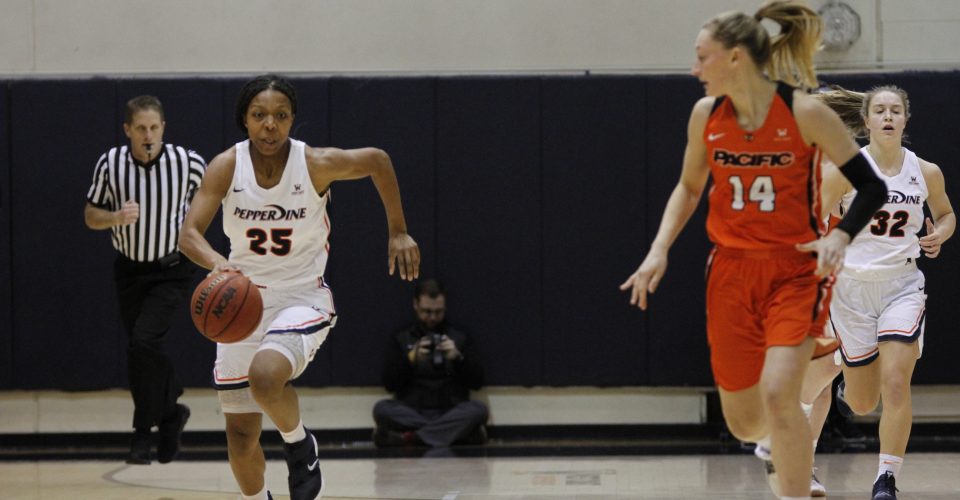 Pepperdine Women’s Basketball is on a roll and making serious noise in the West Coast Conference (WCC) race.

With senior star Yasmine Robinson-Bacote leading the way, the Waves avenged prior road defeats at Pacific and Saint Mary’s. Pepperdine prevailed 96-76 over the Tigers on Feb. 21 and 77-72 over Gaels on Feb. 23.

“We were definitely trying to keep the streak alive,” Robinson-Bacote said. “We’ve been playing really good basketball for the past month.”

The Waves’ most recent loss came Jan. 26 against Pacific, and the team recalled that they had only one day to prepare for that matchup against the Tigers, which resulted in an 11-point loss for Pepperdine.

“We didn’t have ample opportunity to prepare correctly for them,” second-year Head Coach DeLisha Milton-Jones said. “They are a team where you need extensive amount of time to scout.”

This time around, the Waves were ready. Robinson-Bacote scored 18 of her game-high 29 points in the first half, scoring from all over the court, and added 11 rebounds to complete a double-double.

“I just give all the credit to my teammates for putting me in great positions and to trust me with the ball,” Robinson-Bacote said. “When I have the ball, I know that I have free reign to make good decisions.”

Junior guard Barbara Sitanggan scored 15 of her career-high 24 points in a dominant first half that saw the Waves jump out to a 52-26 lead at the break.

“My role as a leader is just to keep communicating and telling everybody where to go, what to do,” Sitanggan said. “Scoring is not really my forte.”

The Waves were dominant in all facets, leading by as many as 36 points in the third quarter and holding the Tigers to 32 percent shooting for the first half and 37 percent for the game.

“When we play defense like that and allow our defense to really be the thing that starts our offense, then we’re going to be able to play fast,” Milton-Jones said.

Milton-Jones said she was most impressed by her team racking up 50 rebounds, to the Tigers’ 33. Ten of those boards were reeled in by redshirt junior center Megan House.

Pacific, who entered the game fifth in the WCC, one game behind Pepperdine, was led by freshman guard Kaylin Randhawa, who scored 21 points on only 8 shots, and sophomore forward Brooklyn McDavid, who scored 16 points.

“We knew that it was going to be a tough game,” Sitanggan said. “I think the coaches did a really good job scouting them these past couple weeks.”

Freshman guard Malia Bambrick added an exclamation point to a statement win for the Waves, connecting on a 30-foot three-pointer as the buzzer sounded at the end of the third quarter.

After the game, the team immediately shifted their focus to Saint Mary’s.

“It’s extremely crucial for us to keep our foot on the pedal and to continue to play strong,” said Robinson-Bacote, who was named WCC Player of the Week for the second time this season.

On Senior Day (Feb. 23) against the Gaels, Robinson-Bacote led the team with 20 points and 7 rebounds. The Waves were able to maintain a narrow lead and hold off Saint Mary’s in a tightly contested affair, meaning that the team finished the season with a 10-1 record at Firestone Fieldhouse.

House and guard Keyari Sleezer were the other two seniors honored in a ceremony before the game.

Sophomore guard Rose Pflug tied her career high with 17 points against the Gaels, and Sitanggan added 12 points and 10 rebounds for her first double-double of the season. Saint Mary’s senior forward Sydney Raggio led all scorers with a career-high 28 points.

The two critical wins ensured that the Waves would be in sole possession of third place in the WCC entering the final week of conference play. The Waves now sit at 12-4 in the WCC, one game behind Brigham Young and ahead of both Saint Mary’s (11-6 in conference) and Pacific (10-7).

“We go through the motions as far as winning,” Robinson-Bacote said. “We take it for granted, and we have to realize that this is a really big thing that we’re doing, and we’re really making a lot of noise in conference.”

Pepperdine will take their eight-game winning streak to Spokane, Washington for Thursday’s clash with WCC leader Gonzaga, who handed the Waves their only home loss of the season in December.

The Waves will then visit the Portland Pilots on Saturday before gearing up for the WCC Championships, which will take place in Las Vegas March 7-12. 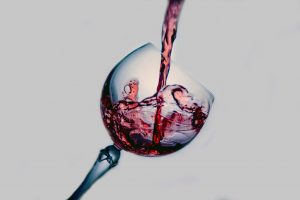 Photo Courtesy of UnsplashPepperdine’s alcohol policy does not allow drinking on campus for a myriad of historical,...
Copyright 2018 Pepperdine Graphic
Back to top