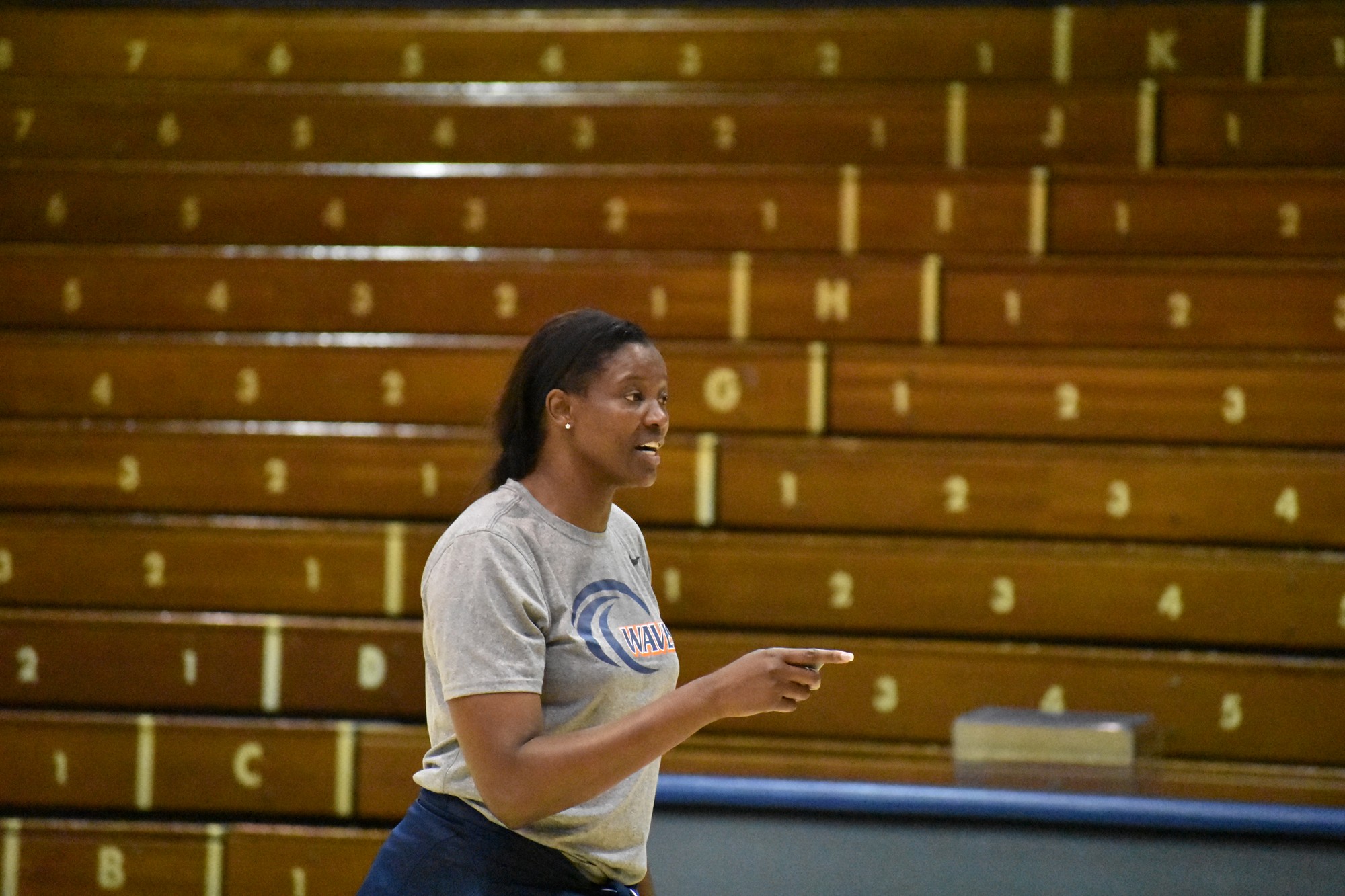 Yet for more than twenty years, she’s been a dominant player who struck terror in the eyes of her opponents with a remarkable style of play, with ornate offensive skills that led to bucket after bucket and lockdown defense. Off the court, she is a polite, well-spoken individual. But once the competitive switch goes off, it’s game time.

With the same intense focus and mentality that helped her capture two WNBA championships and two Olympic gold medals throughout her 17-year professional playing career, Milton-Jones said she hope to bring that same approach back as the head coach, hoping not only for success, but also growth and a deeper passion for the game of basketball among her players.

“Learning from some of the best minds in the game of basketball with the likes of Michael Cooper, Bill Laimbeer, Carol Ross and Geno Auriemma has helped me develop my coaching style,” Milton-Jones said. “I’ve been able to pull from all of their coaching philosophies and styles in many different facets.”

The Georgia native credits her high school coach at Bradwell Institute, Janet Reddick and Florida coach Carol Ross in helping her grow her personal game, as well as her approach to the game.

“Janet Reddick was firey, highly competitive and tough as nails,” Milton-Jones said. “She taught me how to play with a ferocious intensity and ferocious appetite for wanting to win and win at all costs. By the time I got to college, I was a monster. Carol Ross was the one who helped refine me and helped tame the beast that was in me. She helped me understand how to be gentle yet fierce, graceful yet powerful, all at the same time.”

During her long playing career, Milton-Jones played with many legendary athletes, including eight-time WNBA All-Star Lisa Leslie for six seasons with the Los Angeles Sparks.

“Lisa took me under her wing early on in my career and really showed me the ropes in how to take care of myself and how to train properly and how to be a good pro,” Milton-Jones praised. “She would wear lipstick and maybe some makeup while she played, and she would be out there balling. Her favorite line was ‘don’t let the lipstick fool you’ and she was not afraid to throw elbows and get down and dirty. “

Outside of Leslie, Dawn Staley was another teammate who Milton-Jones praised for helping her see the game in a new perspective.

“Dawn Staley opened up my eyes for the game from the three-point line in as opposed to me being a post player looking at the game only under the basket out,” Milton-Jones said. “She helped increase my intelligence just from being her teammate, watching her play, how she communicated and how she was like the glue for the team on and off the court.”

Following her decision to hang up her jersey in September 2016, Milton-Jones got the call to join the staff of Pepperdine’s Women’s Basketball program. Because of her stint as Pepperdine’s assistant coach during the 2016-17 campaign, Milton-Jones said she feels more equipped for the upcoming season since taking the helm of the program.

“Some of the things I learned last year, definitely, are around the WCC and the competition we have to face night in and night out,” Milton-Jones said. “The styles of every coach that is in this league and, of course, the players.”

In her first season in the program, Milton-Jones was presented with a young and injured team. However, she used her time to not only learn about the West Coast Conference, but also develop deeper relationships with the players on the roster.

“Now that I’m the head coach, I know how to get the best out of them,” Milton-Jones said. “I know things that most normal head coaches wouldn’t know, and I’ve been able to walk into this with relationships already established and fostered in the right framework so that we can have success hopefully sooner rather than later.”

Based on the players on this season’s roster, she expects many players, new and returning, to step up and shock the league, most notably, new incoming senior guard Peyton Langston.

“She’s very quiet and unassuming off the court, but on the court, you can tell that she lets her personality come out, and it’s flamboyant and peacock-of-a-tail in the way she likes to display it,” Milton-Jones praised.

Outside of Langston, Milton-Jones also expects mainstays like junior Yasmine Robinson-Bacote (who made the All-Conference First-Team last season), Megan House and Barbara Sitanggan (who both had honorable mentions) to have big seasons as well. However, she does expect big things from all her players.

“I’m also looking for big things from some of our returners as well as some of our newcomers, so there’s room and opportunities for anybody to have a breakout season because we’ve got a talented group, and not only are they skilled, but they’re intelligent as well.”

Milton-Jones said her goal for the program is to not only bring an intense mentality, but also one that helps players grow and be ready for the next stage of life, whether or not that includes basketball.

“For the players to be able to see me and know that I’ve been there and done that, and know that I’m here to help them through this process,” Milton-Jones said. “I want to keep them motivated, to keep them in the right frame of mind to achieve their dreams, that’s probably the biggest and best job that I can do in terms of leaving a legacy for the women here at Pepperdine.”

The first-year head coach said she also hopes the members of her coaching staff can help with player development and character growth, bringing in BJ Porter from Antelope Valley and keeping Josh Pace as assistant coaches.

“BJ Porter is a young, fresh, hungry individual that can come in and relate to the girls because he’s not that far removed from the game himself. He has a vast knowledge when it comes to the X’s and O’s of the game,” Milton-Jones said. “I brought Josh back because he is a great recruiting coordinator since he knows the type of talent academically and athletically that Pepperdine needs in the LA area.”

As one of the only basketball programs in the nation currently featuring a husband-wife duo (George Washington is the other), Milton-Jones decided to make her Pepperdine coaching experience a family affair, bringing in husband Roland Jones as an assistant coach to the team.

“The things I’ve been able to accomplish with him behind my back, it would be missed if I did not mention him in the role that he played in my successes, since it is very pivotal,” Milton-Jones said. “His European connections, his vast knowledge of the game from a point guard’s perspective, his ability to develop players and all the relationships and networking he’s done throughout our 17-year journey and my pro career, you’ll see the fruits of his labor as this program continues to grow.”

Jones describes his relationship with DeLisha as one that is very special due to their understanding of one another.

“We’re a team and we like to do things together, work hard at those things and bounce ideas off each other,” Jones said. “It [Our relationship] is very positive, even if we disagree on something. We tend to come back and find a solution where we’re both comfortable and have a great understanding of each other.”

Jones also recalled the moment the two dreamed of coaching a team together, saying it was on their bucket list for 10 years.

“We were in Valencia, Spain and we both came home from a practice and thought it would be amazing to coach a team together,” Jones said. “For us to be here today at Pepperdine, we’re so grateful from end to end on a daily basis. To get this responsibility of bringing this program to where it wants to be, it’s special and we’re looking to do big things this year.”

As Milton-Jones builds and grooms the team, she not only hopes to bring in a new tough brand of basketball onto the court, but also hopes basketball can bring the Pepperdine community together.