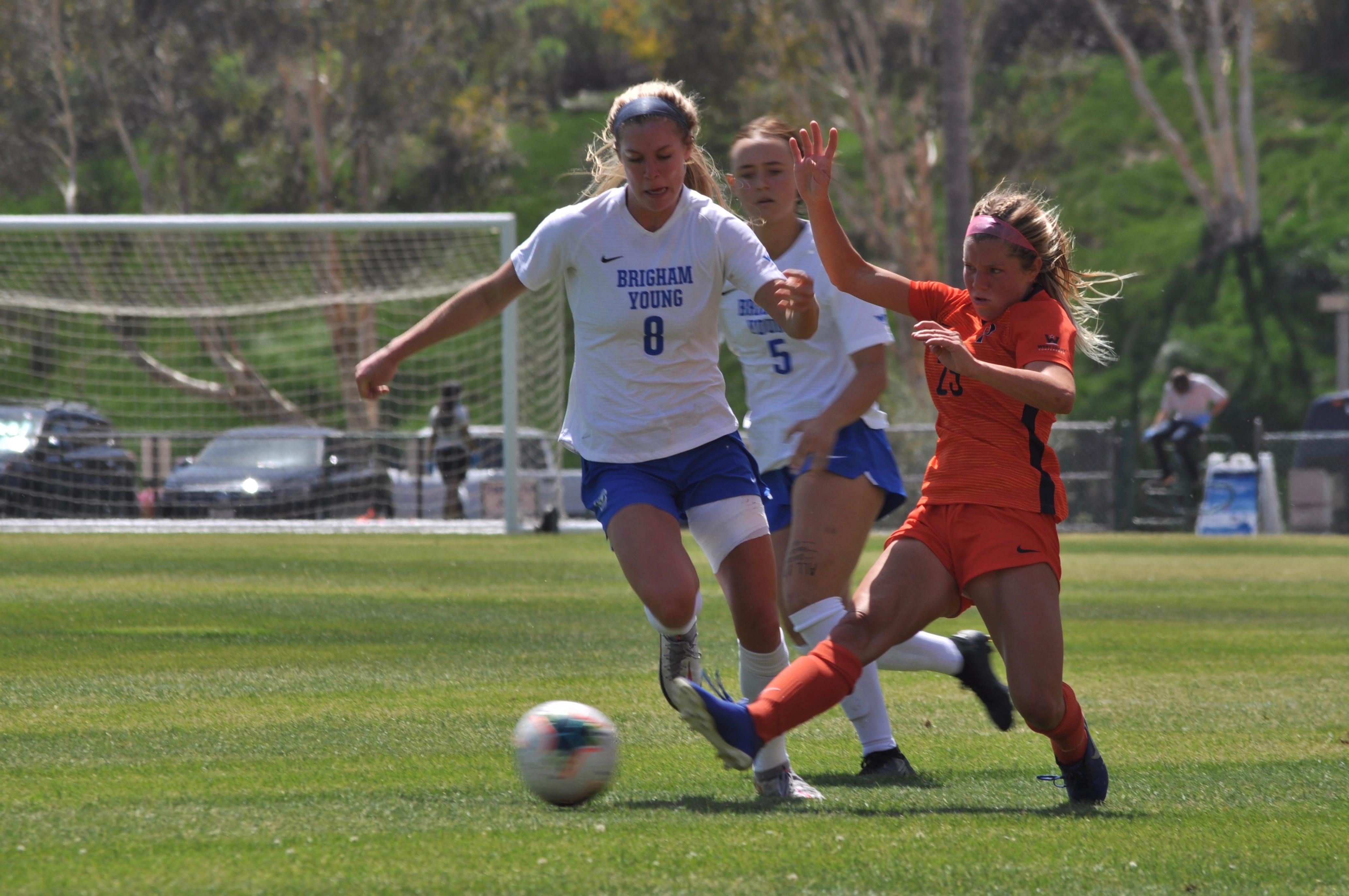 Pepperdine’s Shelby Little (in orange) attempts a tackle on BYU’s Mikayla Colohan (No. 8) during Saturday’s match in Malibu. Colohan, the reigning WCC Player of the Year, provided an assist in BYU’s 2-1 win.

Pepperdine Women’s Soccer came into the April 10 matchup versus BYU knowing it was probably its last chance to impress the NCAA Tournament selection committee with a signature win at Tari Frahm Rokus Field.

The No. 25 Waves outshot the No. 16 Cougars 16-8 and were the threatening team for large stretches, but the visitors rode the playmaking of seniors Cameron Tucker and Mikayla Colohan to make the most of their chances and seal a 2-1 victory. It was the first win in Malibu since 2012 for BYU.

“We’ve outplayed a lot of teams this year, and I would edge it toward us today,” Head Coach Tim Ward said. “I think we had more shots and clear-cut chances, but they were ruthless. They got two chances and buried it.”

The clearest chance for Pepperdine came less than a minute into the match. A BYU defensive giveaway gifted the Waves a two-on-zero breakaway, with Cougars goalkeeper Cassidy Smith charging off her line. Waves senior midfielder Calista Reyes received the square ball with an empty net in front of her, but she put the shot wide left.

Those wild first 30 seconds were a precursor to a fast and furious opening to the match. Both teams were determined to out-attack one another with open and direct styles of play, which junior winger Leyla McFarland said played into BYU’s strengths.

“We knew they like to run,” McFarland said. “We were going to try to prevent that as much as possible, but we honestly got into a track meet with them. We were both going so hard.”

Despite the fast-paced start, Pepperdine looked like the stronger team early on. The Waves successfully counter-pressed BYU and forced the Cougars defense into several mistakes in their own half.

In the 14th minute, McFarland dribbled the ball through the legs of a BYU defender and played a through ball into senior midfielder Joelle Anderson. The Houston Dash draft pick muscled off a BYU player and found herself one-on-one against Smith, but shot it right at the Cougars keeper.

After the first 20 minutes, the pace slowed down significantly, and BYU began to assert itself. In the 26th minute, Tucker brought the ball up the right side and sent a searching pass across goal. Ashton Johnson, a substitute who had only been on the field for three minutes, beat the Pepperdine defender to the ball and hit the back of the net to give BYU a 1-0 lead on their first shot of the day.

The Cougars dominated play up until halftime, forcing saves from Waves goalkeeper Zoe Clevely in the 30th and 42nd minutes, but Pepperdine still took a 6-4 shots advantage into the break.

At the start of the second half, Pepperdine came out on fire, putting pressure on the Cougars immediately. Substitute senior forward Devyn Gilfoy and Anderson forced saves by Smith within the first five minutes of the second half, and freshman Tori Waldeck hit the side netting from a tight angle on the end of a pass from Anderson in the 59th minute.

“When you can rotate girls in midfield and up front, you can press and go after teams a little bit more,” Ward said.

Once again, it was the Cougars who got on the scoresheet by converting their first real chance of the half in the 60th minute. Colohan, the reigning WCC Player of the Year, advanced the ball in transition and played it on to Tucker. After setting up BYU’s first goal, Tucker was on the receiving end of this one, punching it past Clevely to make it 2-0.

The dynamic duo of Colohan and Tucker have paced the Cougars attack all season. With her goal and assist on Saturday, Tucker has 8 goals and 7 assists in 14 games this season. After scoring 16 goals in 23 games a year ago, Colohan already has 11 this year, and notched her fifth assist setting up Tucker against the Waves. The Orlando Pride selected Colohan with the 14th overall pick in the 2nd round of this year’s NWSL draft, 12 picks ahead of Pepperdine’s Anderson.

The Waves refused to go quietly after falling behind by two goals. Reyes hit the post from a very tight angle in the 61st minute, and sophomore forward Shelby Little sent a strong shot over the bar in the 63rd.

“I think every game ebbs and flows the way that it did, but I’m really proud of our team for the way they responded and the way we never stopped and never gave up,” senior Laura Ishikawa said.

Pepperdine got a goal back in the 68th minute. Ishikawa, playing as a left back, lifted a ball over the top of the BYU defense for McFarland to run onto. McFarland rounded a defender and fired a shot into the bottom right corner past Smith from six yards out to cut the deficit in half and give some credibility to Pepperdine’s attack.

“Those are, like, my favorite kind of balls to run onto,” McFarland said. “Anything over the defense, just let me run. The defender had a pretty good position, but I saw her slow down a little bit, so I thought this was my time to cut her off.”

Pepperdine searched for the equalizer, but it didn’t come. A scramble after a 74th-minute corner saw the ball squirt out to senior forward Aliyah Satterfield, who hit a first-time volley that forced Smith into a diving save. A giveaway by Smith gifted Anderson a chance in the 81st, but once again the Waves playmaker couldn’t place her shot away from the middle of the goal, and the save was comfortable for the Cougars goalkeeper.

At the other end, Tucker had a one-on-one chance to ice the game in the 83rd minute, but Clevely made a fantastic save on the breakaway.

When the final whistle sounded, Pepperdine was left to dwell on missed opportunities, and faced another instance of coming up just short against a top team.

“Maybe this is what our program needs looking forward, so we don’t forget this,” Ward said. “We’ve got to take that next step as a program and just bury chances when we get them.”

The Waves sit at 6-4-1 overall with a 5-2-1 record in the WCC, trailing Santa Clara and BYU in the conference standings. While Pepperdine has taken care of business against unranked WCC opponents, they are 0-4 against Top-50 NCAA teams, with losses to No. 4 UCLA, No. 13 Santa Clara, Stanford and now the No. 16 Cougars.

With the NCAA Tournament only having 48 teams instead of 64 this season, Ward said he is not optimistic about Pepperdine’s chances of being included.

“I think today was the game,” Ward said. “I’d be shocked if we got an at-large bid. You need a significant result against a tournament team and today was our last chance.”

The Waves have one more regular season match on the road against Gonzaga on April 17, but for seniors like Ishikawa, their Malibu careers are officially over.

“It’s definitely emotional,” Ishikawa said. “I’m disappointed that we weren’t able to end with a win, but I’m also just very grateful for the time I’ve gotten to spend on this field and the ways that it’s changed me and the team that I got to spend this time with. Overall, I’m sad that it’s ending, but I’m really, really grateful that it happened in the first place.”