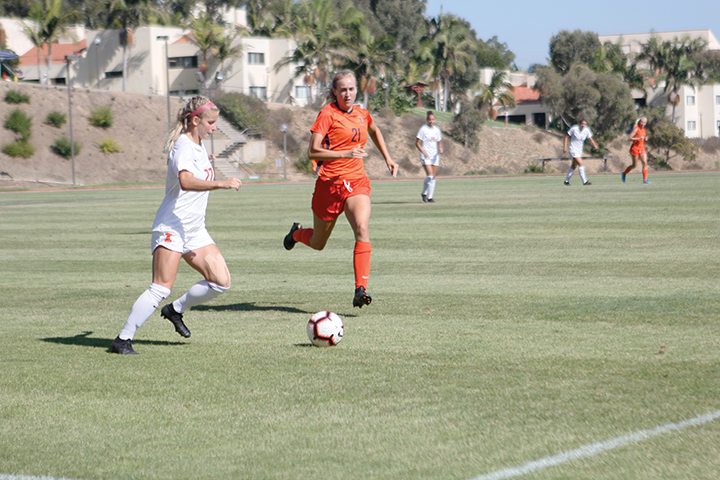 Women’s soccer experienced their first loss of the season at home versus the University of Illinois. The game was Pepperdine’s first home loss in 364 days, and they dropped to No. 6 in West Coast Conference standings. The Fighting Illini overcame a 2-1 deficit and knocked through back-to-back goals and won by a score of 3-2.

The Waves started the game aggressively and nearly had a goal in the sixth minute. Junior midfielder Joelle Anderson flashed down the left side of the field and lined up a shot. Illinois deflected the ball right to sophomore midfielder Leyla McFarland. McFarland crossed to junior forward Brie Welch, and she hammered a right-footed shot that bounced off the crossbar.

One minute later, the Waves had a fearful moment as sophomore defender Izzy Nelson collided with an Illinois player near the Pepperdine goal. She was down on the field and was treated by the medical staff before quickly getting up on her own. She did not sustain a serious injury.

“Yeah, I’m fine,” Nelson said after the game. “She came in really fast and slid into my shin. But it happens, and I was OK.”

Pepperdine scored their first goal in the 24th minute. It was Anderson who passed the ball to Welch, putting her in prime position to score.

“The throw-in came to me as Brie [Welch] made a really good run inside,” Anderson said. “She turned to play it and just kicked it right in.”

Illinois answered in the 40th minute with a goal by senior midfielder Arianna Veland that closed the first half.

The Waves came out fast once again to start the second half. In the 49th minute, freshman midfielder Shelby Little chased down a ball on the right side of the field and set up a high arching cross to McFarland, who then scored her first goal of the season.

It was also the first assist of the season for Little, who mentioned the biggest difference in collegiate soccer compared to club.

“It’s the speed of play,” Little said. “Just having to think before you get the ball is different. You have to be faster in everything you do.”

Fellow freshman forward Alex Hobbs also played in the first three games and contributed valuable minutes off the bench. Hobbs had a similar response to the biggest change the collegiate soccer brings.

“Honestly, speed of play and physicality,” Hobbs said. “I wasn’t able to play high school soccer my junior and senior year because of DA. And so coming in from club, the girls are bigger, stronger and faster. So it’s been fun trying to keep up with them.”

Ten minutes after the goal by McFarland, the Fighting Illini re-tied the game. Redshirt freshman midfielder Kendra Pasquale received an entry pass from the left side and shot. Redshirt sophomore goalkeeper Zoe Clevely deflected the ball back to Hillman, who scored after a scrum.

Pepperdine battled back minutes later as senior midfielder Erin Sinai floated a shot to the top right corner of the goal but was stopped by the Illinois goalie.

In the 81st minute, Illinois junior midfielder Maggie Hillman shot the ball, and Clevely deflected it right back to Hillman, who made her second attempt. It was the final score of the game.

After the game, Ward was open about how the team lost.

“We had our opportunities to put this game away,” Ward said. “Early on, we hit the crossbar — had two PKs given — and I’m a little disappointed we didn’t get another when Calista [Reyes] got whacked in the box when the score was 2-2. That was critical, and she has the marks on her achilles tendon to show for it.”

The Waves second game versus Texas A&M was their first defensive battle of the season, and this loss was their first back-and-forth shootout. Even with the result, Nelson said she feels they still hold significance for the team moving forward.

“These games are everything,” Nelson said. “If you don’t win conference, these are the games that the NCAA looks at. Moving forward, we really need to do our best to leave it all on the line and win the non-conference games.”

Three of the Waves’ next five opponents are top-10 teams in the country with No. 9 Vanderbilt, No. 3 Stanford and No. 4 UCLA. Ward said he feels his team needs to execute how they have been practicing to be successful in those games.

“It’s funny because if we stuck to our identity and trusted the process, we wouldn’t be feeling this right now,” Ward said. “If we have to play good defense, then we play good defense, but if we need to possess the ball, then we make good choices no matter what. I don’t give a rip about rankings — every game is different, and if we trust ourselves, we’ll come out on top.”

The Waves are back at home Sunday, Sep. 1 at 1 p.m., versus the Vanderbilt Commodores.