Two Pepperdine players (white uniforms) battle with two Saint Mary’s players (red uniforms) for a header in the Saint Mary’s penalty area. The Waves possessed the ball for most of the game, but couldn’t find a goal. Photos by Ryan Brinkman

No. 13 Pepperdine Women’s Soccer negotiated a hard-fought 0-0 overtime draw with Saint’s Mary’s on Oct. 23. The result marked the Waves’ first draw of the season, as they moved to 13-2-1 overall and 4-1-1 in conference play.

On what was their second-to-last home game of the season, the Waves honored their seniors before the game. Goalkeeper Zoe Clevely; defenders Kailee Gifford, Kelsey Hill, Trinity Watson and Calista Reyes; midfielder Joelle Anderson; and forwards Devyn Gilfoy and Olivia Packer walked to the middle of the field with family and friends before kickoff.

“Four and a half years flew by pretty fast,” Anderson said. “I’m just so lucky to be a part of this group of seniors. I wouldn’t want to go through it with anyone else. We’re not finished, I think we have a lot more games left in us, but I’m super proud of this group and what we’ve accomplished so far.”

Coming off a 4-0 away loss to WCC rival Santa Clara on Oct. 20, Head Coach Tim Ward said the Waves wanted to start the game on the front foot. Nevertheless, it was the Gaels who came out the gates flying, getting into the Waves’ penalty area twice inside the opening two minutes.

After absorbing the initial pressure, the game settled into a pattern that would last the full 90 minutes and beyond. The Waves controlled the ball, and the Gaels looked to play on the counterattack.

“The way they set up was a team that did not want to get beat,” Ward said. “They were willing to concede the ball, and then they were waiting for a moment on the counterattack. Even though we dominated the game, they had one or two moments that were dangerous.”

The Waves’ possession created more chances as the game wore on. Anderson swung in an inviting ball off a corner kick at the 13th minute, but Saint Mary’s goalkeeper Sonja Rajatalo punched the ball clear.

Flashing forward to the 65th minute, Anderson played a delightful cross into junior midfielder Carlee Giammona, who’s header glanced just wide of the post. The Waves kicked the ball out wide and launched balls into the box repeatedly, but were unable to find the finishing touch.

“I thought we were able to create chances,” Anderson said. “We had like 10 or 15 [chances] the whole game. I think we just need to do a better job getting people on the back post and being able to finish those crosses.”

Clevely came up big on a number of occasions, including the 60th minute when Gaels defender Emily Wright took a shot from the left side of the six-yard box.

Clevely has made her last year as a Wave a memorable one: She leads the WCC in goals-against average (0.56), and is second in saved percentage (0.830) and goals against (9).

“I don’t think I’m ever scared,” Clevely said. “I’ve been doing this for years. I’ve said this to my teammates before: I feel like a predator […] As a goalkeeper, you want to be the unexpected, to be a dream-crusher.”

Saint Mary’s had chances of their own, mostly through midfielder Suzuna Shibukawa. After a well-played counterattack in the 41st minute, Shibukawa attempted to reach a cross in the Waves’ six-yard box with a scissor kick, but she missed the necessary connection to trouble Clevely.

The Waves, though mostly in possession, stayed organized defensively. Hill, Watson and Reyes were vocal from the backline throughout the game, as were the other seniors.

“Each one of the seniors is so unique,” Clevely said. “We all have our own little spark that we bring to the team. When it comes to our comedic side, being funny, or bringing a ‘Let’s Go!’ I definitely know that not playing soccer with them, moving through life without them, will leave a huge hole in my heart, and I think the rest of the team’s too.” 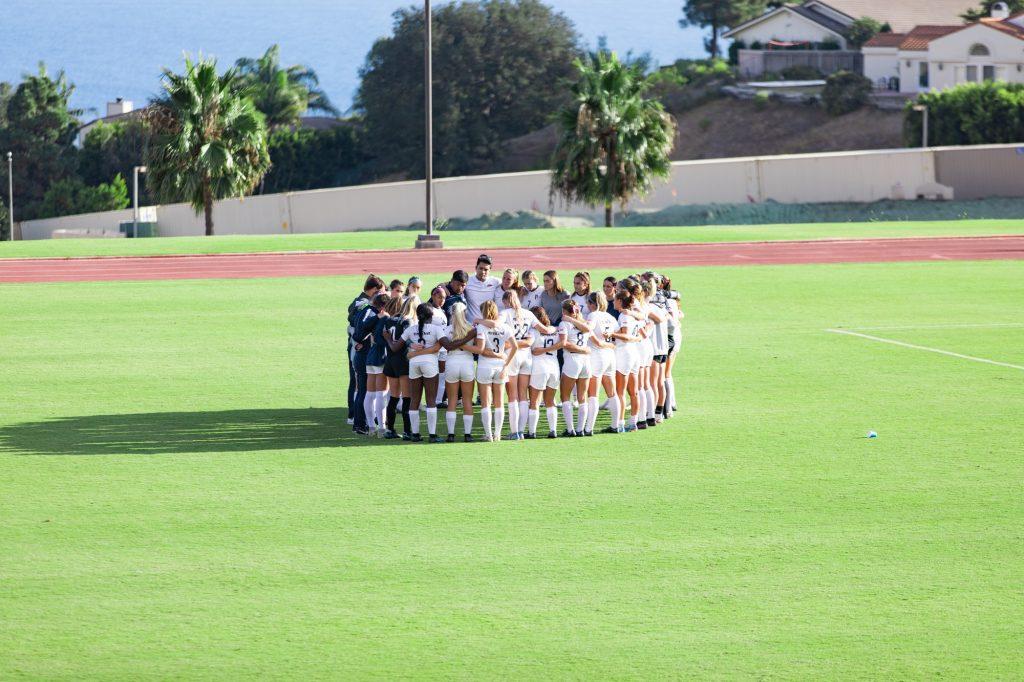 The Women’s Soccer team huddles together after the game. The Waves honored eight seniors before the contest, which was their second to last home game of the season.

With the teams tied 0-0 after regulation, the contest continued to two 10-minute overtime periods. In overtime, the first team to score wins the match, according to NCAA rules.

Against the run of play, it was Saint Mary’s who had the clearest chance to walk away with a victory in the 114th minute.

With 9 of the 11 Pepperdine players in and around the Saint Mary’s penalty area, a ball rolled out to a Gaels player at midfield. The Gaels player carried the ball toward the Pepperdine box in what looked sure to be a one-on-one with Clevely, only for Reyes to track back and provide a last-ditch tackle at the edge of the penalty area.

“She does that all the time in practice,” Anderson said. “Her being able to get back saved the game for us.”

Pepperdine pushed for an elusive go-ahead goal, lobbing cross after cross into the Saint Mary’s penalty area. Saint Mary’s seemed content to play out the rest of overtime for a draw, as they absorbed the Waves’ pressure with a deep defensive block.

The Waves have two more games in the regular season, after they travelled to University of San Francisco on Saturday, Oct. 30, and earned a 4-1 victory. Pepperdine comes back home Nov. 3 for their last home game against Pacific, before facing BYU on the road Nov. 6.

During this run of games, the Waves will set their sights on postseason glory. The NCAA Division I Women’s Soccer Committee will make selections for the 2021 Women’s College Cup on Nov. 8.

The Waves are not guaranteed an automatic bid unless they win the WCC conference title, but could receive one of the 33 at-large bids available for the tournament.

“We’re super hungry after these last two games to come out super strong, put teams away and finish conference [play] super strong, so that we can make the deepest run in an NCAA tournament that a Pepperdine team has ever done,” Clevely said. “We’re out here to make history, and we’re not messing around about it.”