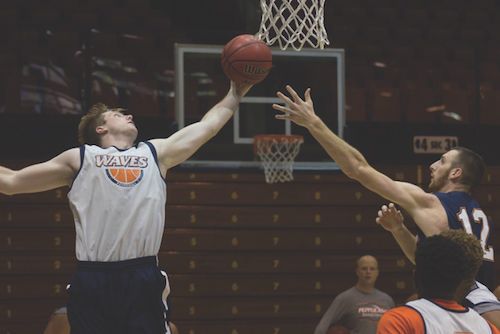 You know the drill. All of these questions will be answered by March, but in the meantime, here are some basic questions and answers about the West Coast Conference, the upcoming season and a brief overview of things to keep an eye out for this season.

What conference is Pepperdine in?

Pepperdine is one of 10 schools in the West Coast Conference: Arguably the nation’s finest conglomerate of private, religiously affiliated schools without football programs.

Um, I’m pretty sure BYU has a football team.

Correct. BYU is the only school in the conference with a football program. However, their football team is one of the NCAA’s four BCS Independents (read as: football nomads).

But BYU is the exception, not the rule. In other news, WCC basketball has changed ever since the Cougars joined the WCC in 2011.

When BYU joined the WCC, the conference was split into two strata: the “big three” and everyone else. The WCC’s “big three” are Gonzaga, Saint Mary’s and BYU. If WCC basketball was a music festival, the three headliners would be the Bulldogs, the Gaels and the Cougars — no questions asked.

Need further proof? They are the only schools in the conference to average over 20 wins per season (in a 30 win season, mind you) since BYU joined the conference in the 2011-12 season, according to sports-reference.com. Since the “big three’s” inception in 2011, all three schools have never missed a postseason tournament (that includes the NIT and the CBI). And the “big three’s” prowess carries on after college: There are more former “big three” players in the NBA this year (five) than there were WCC players in the D-League last season (zero).

They kind of run things around here — and by “kind of” I mean, “really” and by “run things” I mean “are the WCC’s basketball poster children.”

Does this mean only the “big three” will make the tournament this year?

Not exactly. The last time the WCC sent three teams to the Big Dance was in the 2011-2012 season. This time last year, the conference looked to send its big three to the national tournament, but things didn’t go as planned. In a rather-controversial move, the Gaels were snubbed after posting an impressive 27-5 record with the WCC’s regular season title thrown in for good measure.

On the other hand, BYU — in the words of DJ Khaled — played themselves. Although the Cougars played with the nation’s 12th fastest pace, according kenpom.com’s metrics, their combination of bad losses (hello, Portland and Pacific) and mediocre nonconference wins didn’t win them favor in the eyes of the selection committee.

This year doesn’t seem any more promising. Despite Gonzaga Head Coach Mark Few throwing the gauntlet by challenging the rest of the conference to step up their basketball programs, Saint Mary’s and BYU’s non-conference slates don’t look any better this season; the former will play three fringe-tournament teams (Nevada, Dayton and Stanford) and the latter boasts three games against solid, but not quite sure-things like USC, Weber State and University of Colorado, Boulder.

As of right now, the likely scenario for the WCC to be a multi-bid conference would be if Saint Mary’s ekes out a close win over the Zags in the conference tournament, and if BYU makes a first-four game based off of their scorching-hot offense, like they did in the 2014-15 season.

A WCC tournament loss wouldn’t doom Gonzaga. They have the best shot of making the Big Dance without winning the WCC’s at-large bid because of their grueling nonconference slate, which features games against Power 5 schools like Arizona, Washington and Tennessee. Throw in a rematch against Seton Hall in the Advocare Invitational, and Gonzaga has the potential to build a convincing nonconference resume.

What about the rest of the conference?

Here’s where things get interesting.

Pepperdine, Loyola Marymount and USD are the only schools to retain their coaches from last season. Of these two, Pepperdine and LMU are the only teams in positions to challenge the “big three.” Pepperdine retains three of its starting five from last season — former Waves forwards Stacy Davis and Jett Raines graduated — and has one of the best backcourts in the conference in Jeremy Major and Amadi Udenyi. Throw in Utah transfer forward Chris Reyes and a promising freshman class, and Pepperdine seems to be heading in the right direction.

As for USD, it’s current roster has more newcomers (nine) than returners (six), which doesn’t inspire too much confidence for a fan base reeling from last season’s 9-21 record.

The biggest question marks are San Francisco, Santa Clara, Portland and Pacific: all of which have hired new coaches this season. These new hires have put the bottom half of the conference in flux. Establishing a culture of winning is a daunting task for a new coach, so don’t expect any of these programs to become contenders overnight. Of that group, expect Santa Clara and Portland to have the most success; both teams have relatively less roster turnover from last season, and both teams boast guards on the WCC All-Preseason Teams in Jared Brownridge and Alec Wintering, respectively.

One more reason to focus on Santa Clara: They hired Houston Rockets guard James Harden’s college coach, Herb Sendek. If there’s anyone who knows how to get the most production out of a high-volume scoring, one-man-show of a point guard who barely plays defense, it’s Sendek. Look out for Brownridge to solidify his case for being the mid-major James Harden this season.

So with all that said, how will the WCC rankings look this season? I’ve seen the WCC coaches’ preseason poll, but getting a second opinion wouldn’t hurt.

But here’s a little secret from being on a Division I team: Listen to the coaches. Chances are, they know more than we do.