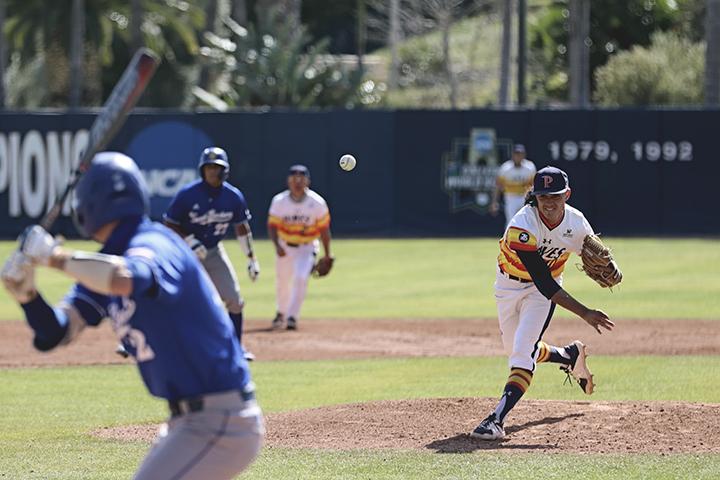 Junior right-hander Trevor Kniskern throws a pitch during the second inning against an awaiting UCSB batter on Sunday, Feb. 28 at Eddy D. Field Stadium. Kniskern started the final game of the series for the Waves, but couldn’t get out of the second inning.

After losing their opening series against Cal Baptist, Pepperdine Baseball sought to turn things around in their four game series with No. 9 ranked University of California, Santa Barbara from Feb. 26-28.

The long ball carried Pepperdine’s offense through the first two games in the series as they hit six home runs, but still came up short as the Gauchos completed the four-game sweep by the scores 7-6, 9-7, 5-0, and 12-2.

The biggest difference between the teams in this series was hitting with runners in scoring position. Pepperdine struggled greatly in these positions, hitting 4-for-33 (.121) while UCSB thrived, hitting 17-for-52 (.327).

The series kicked off Friday afternoon in Malibu, with redshirt freshman right-hander Trevor Hinkel starting the first game. Hinkel made his second career appearance after starting Opening Day for the Waves last Friday against Cal Baptist. Pitching with a quick tempo and attacking hitters early in counts, Hinkel allowed just four hits in 5 1/3 innings pitched while striking out seven.

“With college baseball, there’s a ton of hitters that tend to take the first pitch in the first place,” Hinkel said. “If I can throw a first pitch strike, I’m either going to get a take and get ahead early or if they get a swing on it, I’m keeping my pitch count down letting them put balls in play.”

The Gauchos drew first blood in the game with a solo home run in the second inning.

Freshman second baseman John Peck helped the Waves offense get started in the third inning with a lead-off double down the left field line. He was later brought in by a Billy Cook sacrifice fly to tie the game at 1-1.

In the top of the fourth inning, the Gauchos got their second hit of the afternoon on another solo home run that flew just under the scoreboard to retake the lead 2-1.

The Gauchos lead would not hold as senior right fielder Reese Alexiades and sophomore catcher Ryan Johnson would lead off the bottom of the fourth inning for Pepperdine with back to back home runs. Freshman designated hitter Connor Bradshaw would later score in the inning on a Quintt Landis sacrifice fly to make the game 4-2.

Two doubles in the top of the sixth inning ended Hinkel’s day on the mound, with senior Dane Morrow entering the game with the tying run on second base and one out. Morrow got out of the jam by striking out the next two UCSB batters.

The Gauchos struck again in the seventh inning, tying the game with a double and an RBI single followed by a go-ahead three run home run off Morrow that made the score 7-4. Solo home runs from senior first baseman Justin Lutes and Alexiades brought Pepperdine within a run in the bottom half of the seventh.

That run eluded the Waves in the final innings. Gauchos third basemen Cole Cummings threw out Johnson at home plate later in the seventh on a ground ball to the left side.

Despite tallying more hits, home runs, walks and hit by pitches, the Waves fell in the series opener 7-6. “The Waves went 0-for-8 with runners in scoring position, while the Gauchos capitalized on their opportunities, batting 4-for-10.”

On Saturday, the Waves traveled to Caesar Uyesaka Stadium for a doubleheader in Santa Barbara. Senior Gunnar Groen got the start in game one for the Waves.

Pepperdine exploded for five runs in the third inning, taking advantage of two Gaucho errors to score a run and load the bases before Cook unloaded a 420-foot grand slam for his first hit of the season.

Groen held the Gauchos scoreless through the first three innings, but struggled in the fourth, walking three, hitting another and allowing three hits which plated four runs before being replaced by junior Jack Baird with two outs. After a pair of wild pitches by Baird, the Gauchos tied the game 5-5.

With a one run lead and runners at second and third base in the eighth, center fielder Steele Ledford hit a 2-run single that gave UCSB a 9-6 lead going into the ninth inning.

In Pepperdine’s last at-bat, Wyatt Young hit a solo home run to bring the Waves a run closer, but they fell 9-7.

Sophomore Nathan Diamond started the second game of the doubleheader for the Waves, giving up three runs on six hits while not allowing a walk and tallying a pair of strikeouts.

The Pepperdine bats struggled mightily to get going in the second game of the doubleheader. They remained hitless through 7 2/3 innings until Young laced a double for Pepperdine’s first and lone hit in the game. The Waves remained scoreless as UCSB rode their pitching to a final score of 5-0.

In the fourth and final matchup of the weekend hosted in Malibu, junior Trevor Kniskern started on the mound. Kniskern would not make it out of the second inning, giving up five runs.

Freshman Brandon Llewellyn came in for Kniskern and pitched well, giving up one unearned run on an infield single before getting out of the jam. Despite being down 6-0 after two innings, Llewellyn held the Gauchos at bay, only giving up another unearned run in the sixth inning. Llewellyn finished his outing tossing 4 1/3 innings, allowing 3 hits and the 1 unearned run while striking out two.

Llewellyn said his command of his slider as an out pitch was key in his outing.

“It’s definitely the best pitch in my arsenal,” Llewellyn said. “I’ve thrown it since I was little. Coach [Jim] Lawler has been great at helping me improve it.”

Llewellyn has played an important relief role so far this season, which is rare for a freshman, but Llewellyn said he welcomes the opportunity.

“My mindset stays the same as a freshman as if I was a senior. Come out and throw strikes” Llewellyn said.

Pepperdine’s offense was unable to make up the deficit, pushing across runs in the sixth and eighth innings en route to a 12-2 loss while striking out 16 times. Pepperdine’s defense also made five errors, which attributed to four unearned runs.

“We just have to clean everything up, it starts with the mental game,” Cook said. “Mental errors that kill us on both sides and those leak over into physical performance. We need to slow down, take a deep breath.”

This weekend, the Waves will face a series of Southern California opponents, taking on No. 8 UCLA on Friday, March 5, USC on Saturday, March 6, and Cal State Fullerton on Sunday, March 7, before returning home to play USC again Tuesday, March 9.