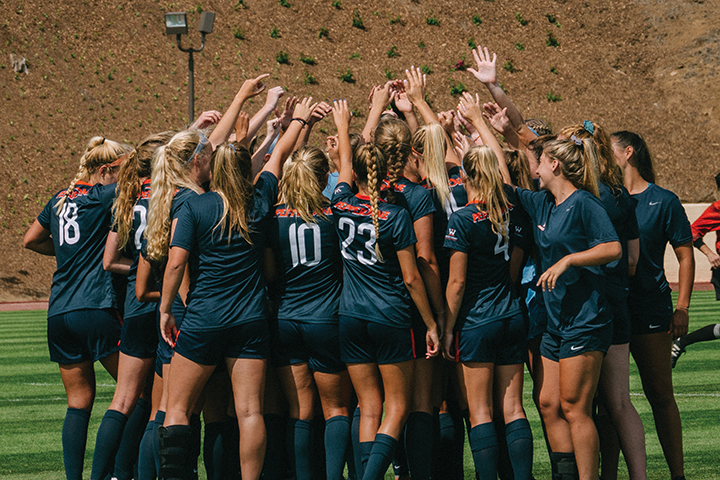 The Women’s Soccer team participated in an exhibition match against the Japanese University Women’s Football Association‘s (JUWFA) Kanto region team Sunday. The Waves were leading the game until the Japanese team scored in the last five minutes of the second half, ending the game with a final score of 2-2.

JUWFA Kanto region team is formed with 20 college students selected from universities in eight prefectures (districts) in the region, such as Tokyo. This match against Pepperdine was their fifth and final match in California, after playing friendly matches against UC Irvine, Cal State Long Beach, UCLA and USC.

Beating University of California, Riverside with a score of 7-2 the day before, the Waves continued to display a strong performance with solid goals coming from sophomore Devyn Gilfoy and freshman Leyla McFarland in the first half.

With Pepperdine leading with a two goal advantage, the Japanese team responded in the second half. The Japanese team caught up with the Waves, scoring a goal early on and another just before the match ended.

Despite struggling to defend in the last half and to claim a win over their international opponent, the Wave’s freshman Trinity Watson said she had a great time playing against the Japanese team.

“We definitely had a lot to learn from them,” Watson said, who has prior experience in playing for the U.S. National Team. Watson said she had high expectations from them and was amazed to see the Japanese girls connect with each other, communicating in a language that Watson could not understand.

Rika Koojima, the Japanese player who notched the second goal for the Japanese team to end the game on a draw, said she, too, knew Pepperdine was not an easy contender and was mostly struggling to play against players who were faster and stronger than her and her teammates.

The head coach of JUFWA Kanto, Yukihiro Aoba, also said that Pepperdine had athletic advantages over the Japanese.

“Because we have physical disadvantages [such as height], we try to come up with cunning ideas and techniques and that’s how we play soccer in Japan,” Aoba said. Aoba, a former professional soccer player in Japan, said Pepperdine was efficient in play-style and always eager to score a goal.

Koojima said she was surprised to see the difference in the training environment. “From having amazing athletic facilities to getting sponsored by Nike, everything is so different here compared to Japan,” she said.

After the ninety-minute game, both teams enjoyed interacting with one another at Waves Cafe. Freshman goalie Kinsey Ehmann said the girls were “very sweet” after engaging in lively conversations about culture and relationships with them. Both teams seemed to enjoy learning about each other, especially through sports, as Koojima also said the Pepperdine players were “very generous and gave off good vibes.”

Although the short spring season will come to an end soon for the Waves, Watson is already looking forward to playing with the Waves next season.

“Because we couldn’t pull through last season, as a team we definitely want to come out and win our conference and make it into the NCAA tournament,” Watson said.

Furthermore, she says her teammates’, Michelle Maemone and Hailey Harbison, success in getting selected in NSWL draft in January motivates her.

“Seeing [them] go pro is very inspiring especially since I trained with [them] and definitely gives me hope that one day eventually that could be a dream of mine and my teammates’,” said Watson who keeps in touch with pro-bound seniors for advice and guidance.

In achieving the aforementioned goals, Watson says the Waves’ special team culture will help them.

“On and off the field, there is unity and solidarity,” she said.

The Women’s Soccer team will host their last two home games of the spring season against Cal State Fullerton and Point Loma Nazarene University on March 30.