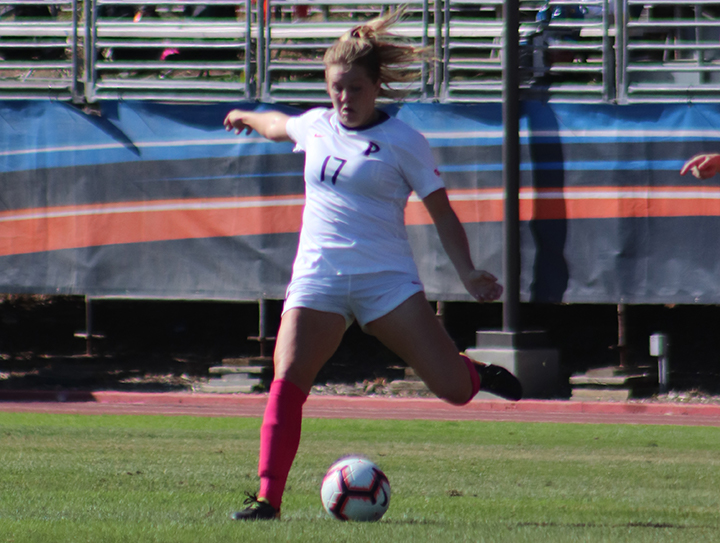 From the first second of the game, West Coast Conference No. 2 Pepperdine asserted control over the No. 4 Gonzaga University Bulldogs. With the majority of the first half spent on Pepperdine’s end, it was clear the Waves were destined to shut out their fourth WCC opponent 2-0. Sophomore Nicolette Lewis and redshirt freshman Olivia Packer pushed for an early lead for the Waves by putting away two goals in the first half.

After two consecutive road games, one of which resulted in a sound 1-5 defeat by undefeated No. 1 Brigham Young University, the Waves made use of their thrilling 1-0 overtime win over No. 7 Loyola Marymount University.

“I think that was a turning point for us,” junior Joelle Anderson said. “We realized that our team just needs to go at it, and, like, we have nothing to lose at this point. I think we did a really good job carrying that momentum.” 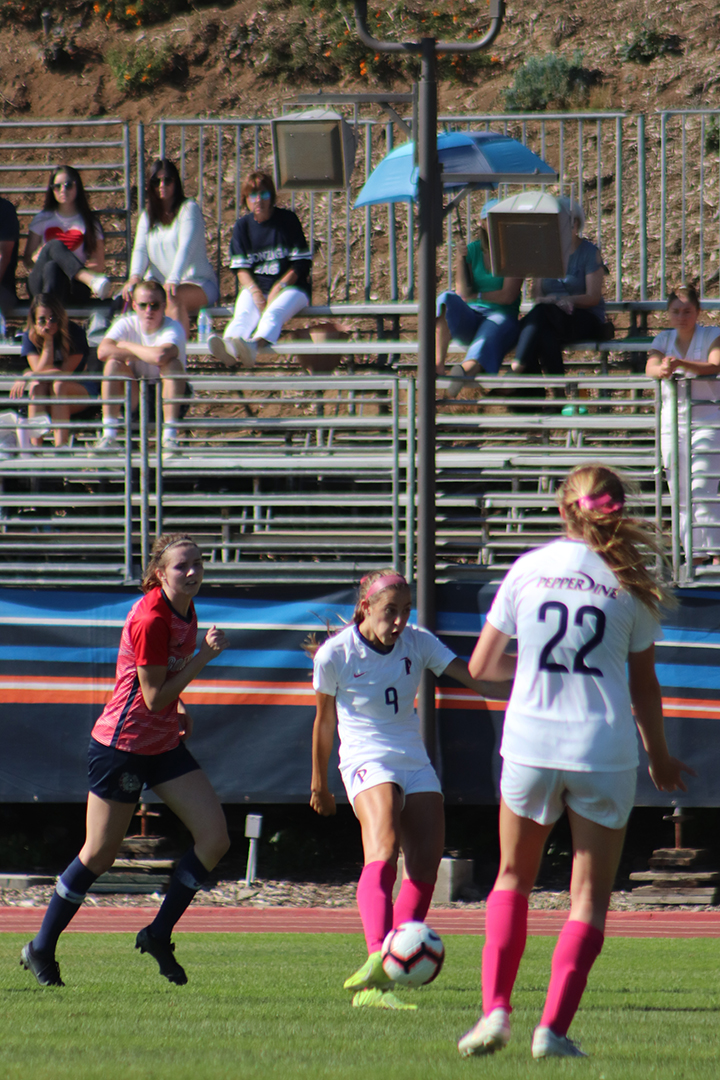 Junior Joelle Anderson uses the inside of her foot to make a pass.

Early in the matchup, junior Calista Reyes kicked the first shot attempt of the game over the top of the goal. Following Reyes’ attempt, the Bulldogs went down not even two minutes later to try to score their first goal. The Waves quickly made use of the failed shot and brought it to their half of the field with a second scoring chance by sophomore Isabel Nelson.

Assisted by junior Devyn Gilfoy and senior Hailey Stenberg, Lewis secured the first point of the game using her quick footwork, launching the Waves to an early 1-0 lead with only 8:28 on the scoreboard.

“I felt that there was a backspin on the ball,” Lewis said. “I just flicked it in with my foot when I felt it was coming my way [because] … I was facing away, so I just used [the] outside.”

Two of Anderson’s four shot attempts were back-to-back in the 14th minute. Gilfoy set out to break through the Bulldogs defense at half field, resulting in another shot attempt for the Bulldogs.

After dribbling the ball across the field in the 20th minute, the Waves made a quick pass to Stenberg for her first shot attempt, but it sailed over the goalpost. Redshirt freshman Kinsey Ehmann saved another incoming Gonzaga shot at the bottom center to keep the score at 1-0.

Pepperdine sent in their first substitutes in the 28th minute, swapping junior Brie Welch for Stenberg and sophomore Leyla McFarland for Reyes. 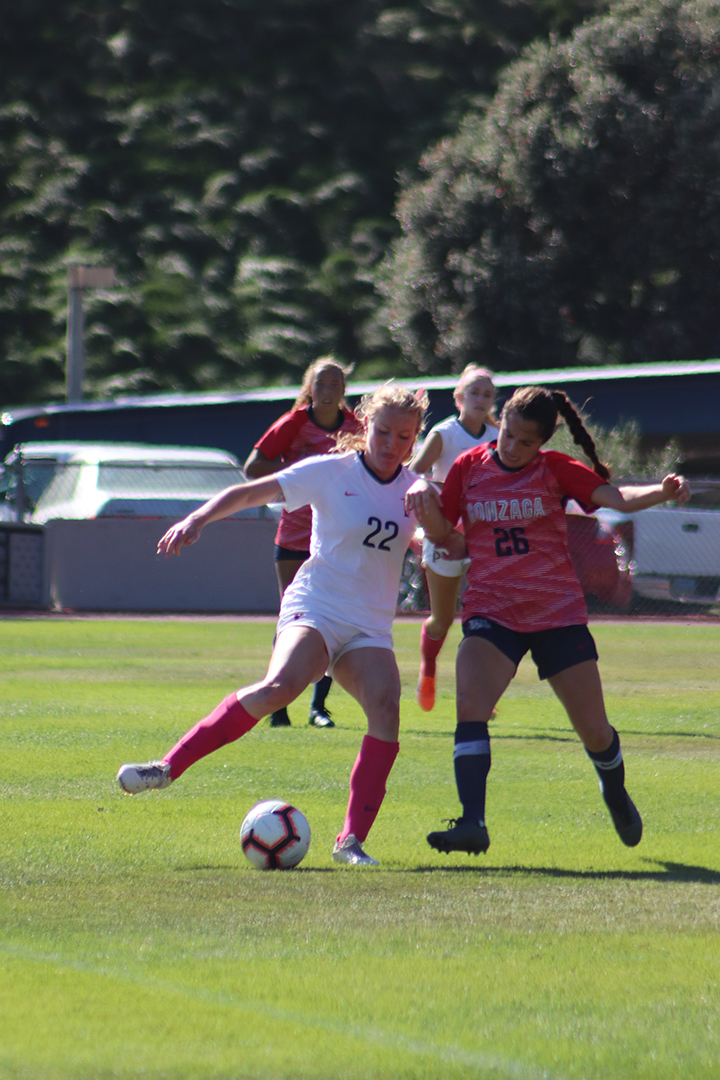 Sophomore Leyla McFarland prepares to strike the ball against an oncoming Gonzaga defender.

Making fast use of her position and the ball, Gilfoy reared back and nearly scored again, but it was caught by the Gonzaga goalie. The Bulldogs tried to keep up with the Waves’ fast tempo as they sprinted down and tried to score once again.

Lewis maintained possession for her team after a battle over the ball at the center of the field. Head coach Tim Ward sent in two more subs, replacing senior Brooke Zenner with junior Chloe Gaynor and Gilfoy with Packer.

Once again, Gonzaga tried to score, but Ehmann was one step ahead and made a save, keeping the Bulldogs scoreless.

Not even five minutes into their time on the field, Gaynor positioned the ball for Packer to shoot a long goal that soared into the top of the net, putting the Waves up 2-nothing with eight minutes remaining in the first half. 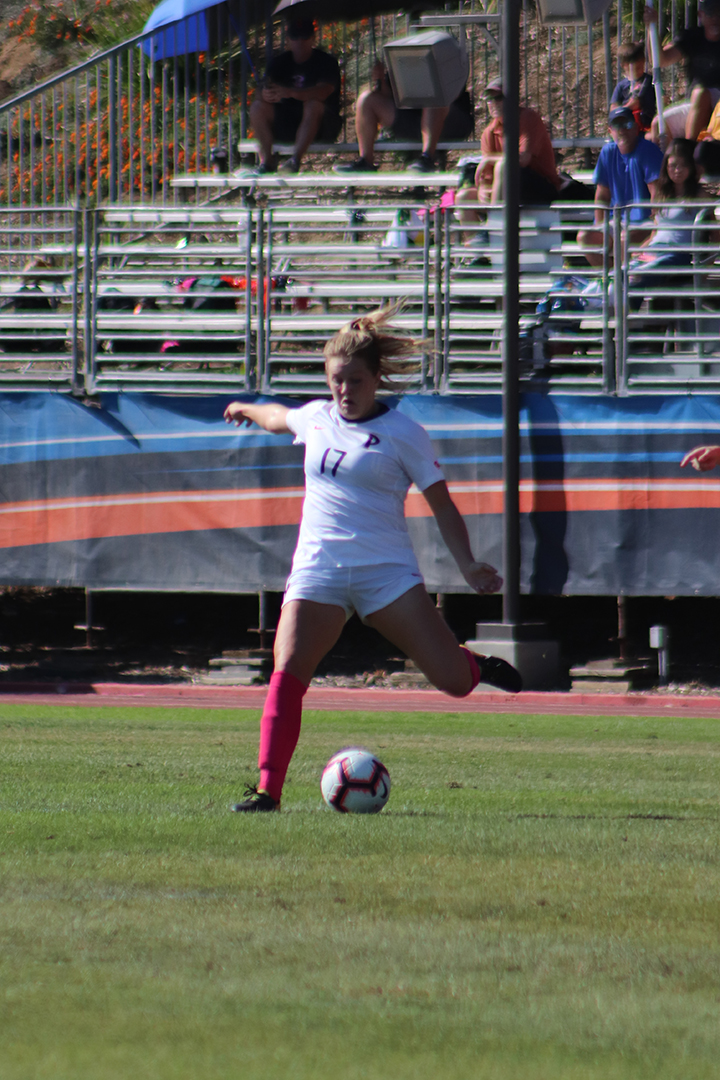 Redshirt Olivia Packer plants her right foot so she can swing through with her left to launch the ball across the field.

“We watched film on [the Bulldogs],” Packer said about combating the Gonzaga defense. “We saw spaces where we can attack, and in practice, we were working on how our midfield can get more into the attacks.”

The Waves had the final first-half shot attempt for both teams in the 40th minute, taking the Waves into the second 45-minute half.

“We just focused on being more positive with our play, which means we want to just get them,” Ward said. “I think in the first half, we did that really, really well.”

In the first 15 minutes of the final half, the Waves were leading the Bulldogs in shot attempts, 5-2.

Since they had a solid lead, Pepperdine backed off and let Gonzaga take possession of the ball while maintaining their fundamentals.

“We have just been really focusing on getting forward and being a collective unit as a team, and [getting] up together and [getting] back together,” Stenberg said. “I think that came out really well today.”

In the final 10 minutes, Anderson was unsuccessful in posting a third point, while Gonzaga took their final, last-minute attempt to score, but Ehmann saved it once again.

The Waves have a quick turnaround, facing No. 3 Santa Clara Broncos on Wednesday, Oct. 23 at their opponent’s site.

“Santa Clara … has some really talented strikers,” Ward said. “We’re going to have to be strong on the road defensively and sort of learn. We’re gonna have to be clinical when [the players] get those chances [to score] and put them away.”

Their next home game is Saturday, Oct. 26 versus Pacific University, which is dedicated to the first responders of the Woolsey Fire that occurred in the Malibu area last fall.